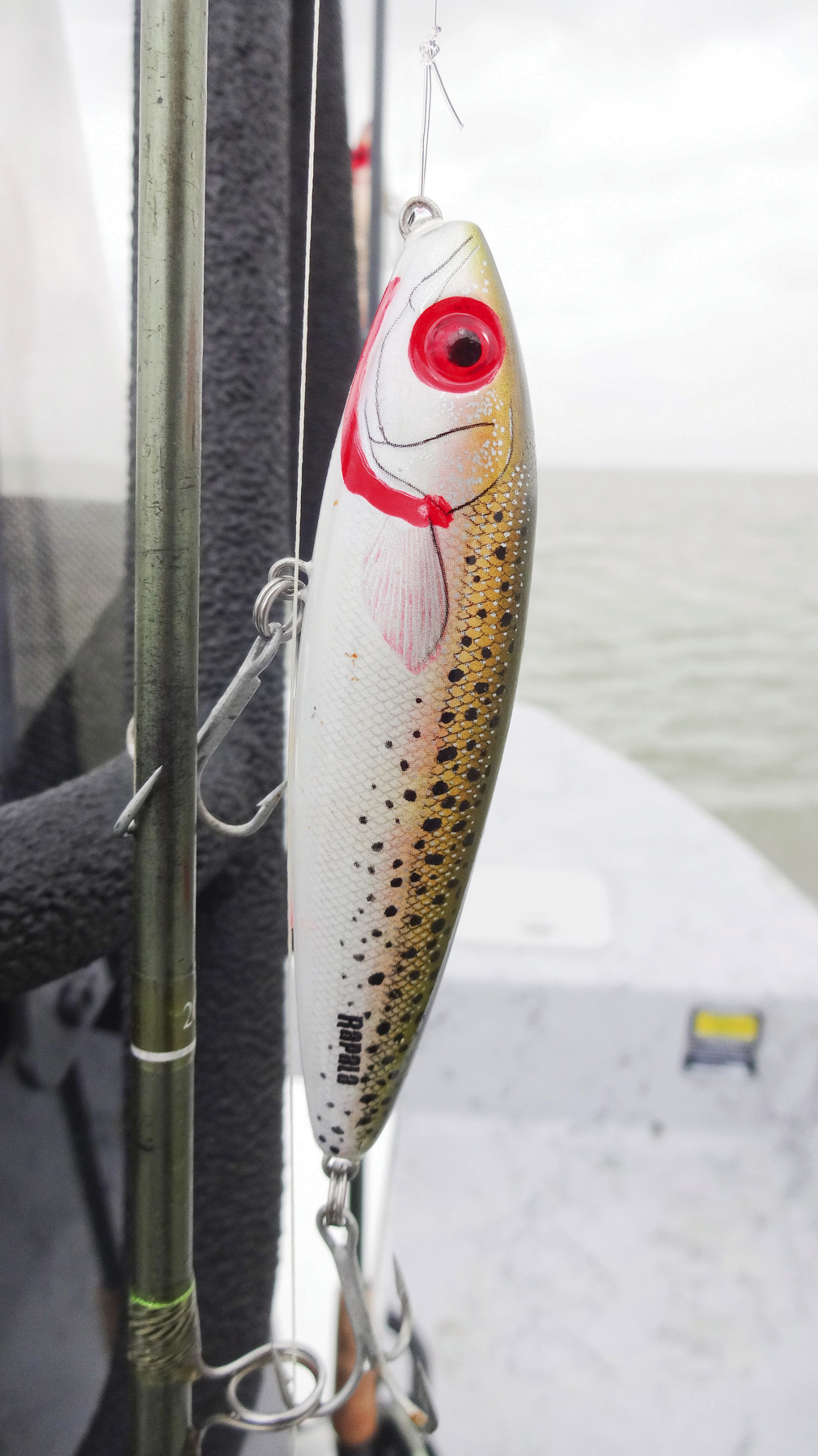 Being a full-time guide, one of the most predictable questions I try to dodge this time of year is, "Hey man, what is the best lure for a big trout right now?"

We all know opinions are cheap, especially the ones we're passionate about, but any response that starts with "I think" usually means the opposite. Let's try to change some of that, although "I think" I do have an opinion.

Truth of the matter is that we are mostly going to catch them on what we think we're going to catch them on. And while confidence is huge, there is one little exception that can easily make ours false. "I think", besides tenacity, the best big trout lure mostly has to do with a little concept called practicality. In reality, a lure is but the tip of the spear, so let's first try to define that little word practical, which as it turns out is perhaps the most realistic factor in any big-trout formula.

Practical, in terms of lure selection, simply means that a lure is appropriate for the task (read conditions) and therefore likely to succeed. No matter how much faith we have in a particular lure knowing "when to throw what" is just as important as knowing "when to be where." It would not be very practical to throw our pet topwater when they are not feeding on top.

One dangerously passionate opinion of mine is that fish are usually found in one of about three basic behavior modes: aggressive, neutral, or negative. So with that said, that "best big trout lure" needs to be the one that gets into the appropriate strike zone for that given moment. That productive zone can be anywhere from three feet to three inches and that's exactly what makes the word practicalpractical!

Over the years I have honed and whittled at my wintertime lure box and the few that consistently make the cut are each highly applicable to one of those three theoretical situations I just mentioned. Y'all remember that price of opinion.

When fish are on a truly aggressive feed, actually the rarest and most short-lived situation we are ever lucky to find them in, everybody can be a hero and a lot of different lures can become "the best" real quick.

My definition of "aggressive" is actively out hunting for food with a big strike zone, and most anything moving in the water is subject to death. When this happens a topwater would be my first choice, probably just because I want it to be. For simplicity's sake, two plugs will usually get it done, depending on conditions.

When a bigger presentation makes sense, such as in heavy chop or thick bait concentrations, on goes a MirrOlure She Dog. The She Dog is a very irritating bait, sounds like a hex nut in a coffee can, and if I was a fish I would hunt down and kill that obnoxious thing too.

In milder conditions, say with a calmer surface, perhaps shallow and clearer for example, I'd have to go with Rapala's Skitter Walk. There just seems to be something right about its sound. Available in full-size and compact, big fish hit both very hard when it's time.

Colors? Sure, color can indeed be critical at times, but to me it's more about contrast. Can they see it or is it too much? Equally important is whether I can see it!

If I had to pick just one color scheme it would simply be the speckled trout pattern. I think (there we go again) that qualifies as being practical. It has decent contrast with a simple dark top and light bottom plus, I don't have to keep second-guessing myself whether they don't like a certain color for the moment. Just trying to keep things simple hereand they have simply worked for me.

My experience says we mostly find fish in their "neutral" mode; not actively chasing and feeding but they can still be caught by attentive fishermen. However, the neutral mode does cause the strike zone to shrink a bit, and that's the attention part of it.

So just where is that zone? We just have to probe and find it and, during the colder months, I think I can usually get down to it pretty quick with just one bait; Paul Brown's Corky Fat Boy, now lovingly brought to us by MirrOlure. But before we get into it, let me first say that I too tire of the endless opinion print we see on this bait every winter, but as long as we're at it here, y'all might as well suffer through my opinion too.

When I need a tool, I need a tool, not a big tool bag, and the Fat Boy can cover lots of situations. Kind of like Channellock Pliers and Crescent Wrench rolled into one; I call it "interactive" and easily fitted to many situations. Bend it up, bend it down, make it ruler straight. I can run it at most any depth and speed; it just goes where I tell it. Many say it's not a "hunting" lure but I happily disagree. This bait is about as practical a weapon as I could ever wish for. Jack it hard and high, walk it just above the grass tips, or keep it exactly at a certain suspended depth. Add the fact that it casts to the backing with a profile that resembles a real meal deal, and well, there is that deal of catching them on what we think we are going to catch them onagain. "I think" I can catch a lot on a plain ol' pearl/chartreuse or maybe pink/pearl/pink. The rest is up to my rod tip.

I can't very well cork this up without mentioning the new MirrOlure Soft-Dine, though. I don't have a lot of time behind one yet, but I'm about as excited as I can be about what I know will be done with it, especially in those shallow and delicate situations we can have during norther recovery periods. It's going to fill that gap between sticking a fish and spooking itand we needed it.

We often see fish go into what I call a totally negative situation. I don't care who we think we are; things can get real tough at times. We need to be able to make dedicated presentations into some very narrow ranges: like right up in their lazy faces. Pessimists need not apply.

For me, the best way to get on them is with a little piece of rubber and a jig head. This is your basic get down and dirty, go to work lure. I'm using Kelly Wigglers Ball Tail Shad for several reasons. Mainly, it's tough and "it wiggles." When things get real slow I can also cheat a bit and stuff a 6mm glass rattle in it, which it accepts quite well and will not rattle out. Despite a wide spectrum of seductive colors adorning the racks a simple plum/chartreuse seems to get bit consistently in a wide range of conditions.

To summarize this whole deal, lure fishing in general allows all of us a lot of leeway for individual behavior. As long as we find the right speed and depth for the moment, there are countless options that should work for the most part. Another opinion of mine is that the very attraction of fishing with artificials is all about finding solutions to immediate problems, and although the ones I've mentioned are not magic bullets, they are what I have personally found to be good solid rounds to fire at the continual hope of a big trout.

Eisenhower once said, "I don't use worms. I want fishing to be a challenge." Well hell, it's supposed to be a challenge, right? But let's not make it harder than it already is. Remember that little word "practical" or we can kid ourselves by continuing to throw our favorite but untimely lures.

I seriously wanna draw a cartoon about the guys I get every week who say, "Hey, if I'm not going to catch them, I want to NOT catch them on a topwater..." Ya gotta love it. I sure "think" I do!