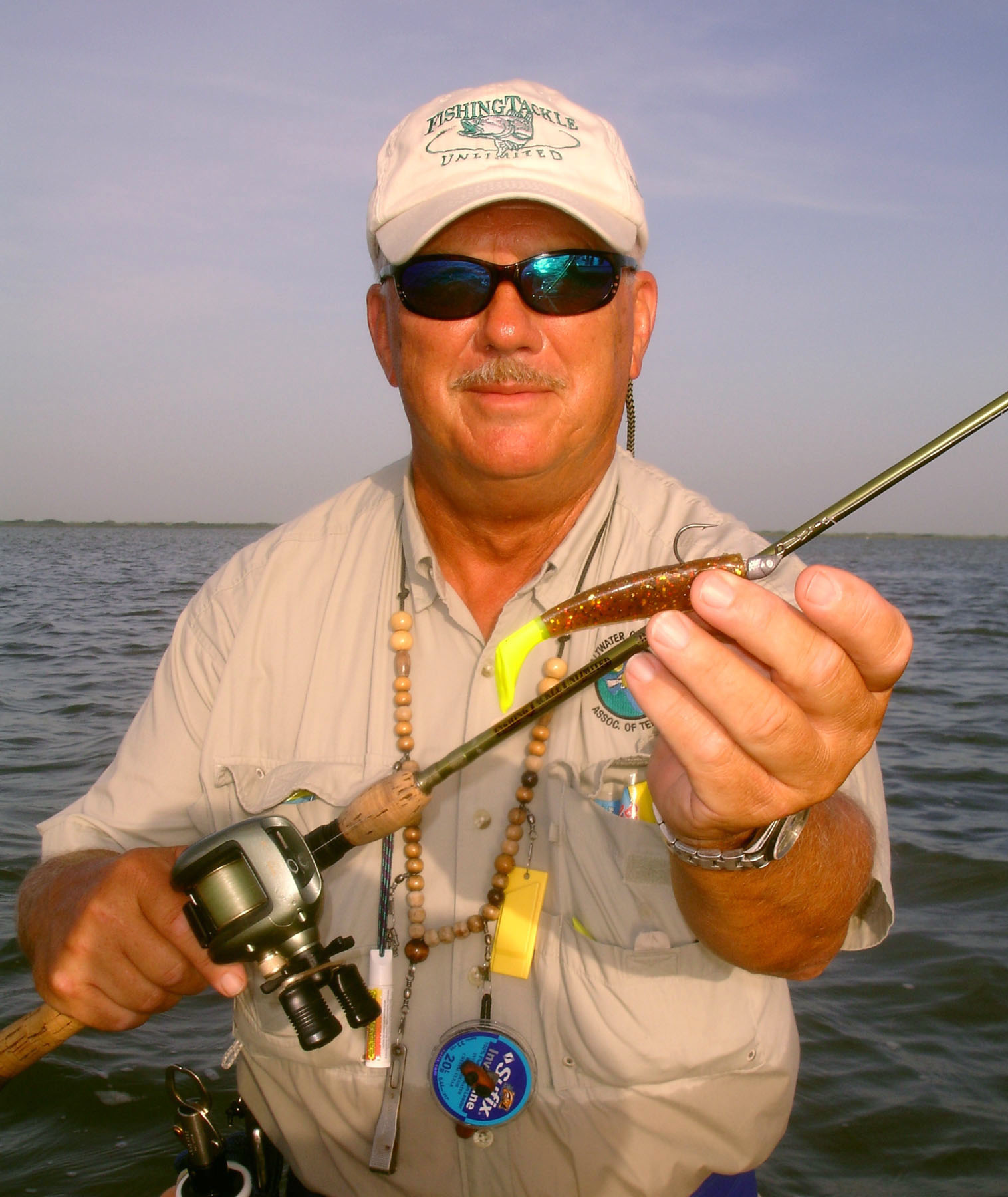 There is little more practical than a simple jig-head with a piece of plastic screwed on it.

In today's comical fishing world, there is little that will incite a stampede quicker than the rumor of a hot new lure. Human nature being what it is, the mere illusion of a fling and forget lure that automatically catches fish is right up there with a "free while they last" sign. There are many forms of wobbelry and shiny wonderment for sale, all guaranteed to make our efforts instantly more successful. It is big business these days, but I'm convinced that many manufacturers fish for people more than fish and we the consumers are the true prey.

Unfortunately, we can't pull skill down from a store rack. Fishing with lures is rarely about the particular lure we are throwing. It's more about the science of understanding what the fish are doing at the moment, and then making a practical decision as to the best way to challenge them. To put it another way, the sooner we understand that it's the Indian more than the arrow; the sooner we will become better anglers.

Let's try to look at some basics as far as what we need or don't need, but first, let's back up a minute and try to figure out why we do all of this stuff in the first place fishing with lures, that is. If we can truly answer that, and identify the underlying goals, we might end up being able to do it all better. That's a good goal too, right?

So, why do we fish with lures? There are certainly more productive ways to take a bunch of fish out of the water than thrashing with a rod and reel around all day. It's physically demanding, flirts against human nature (hard work), and you often don't catch as many and perhaps on some days none at all. However, if fishing is all about the food part of it, let's just all use nets! Personally, I think we throw lures for the same reason we chase a little white ball around and whack it with a stick. It's not about food any more than golf is. Quite simply, it's male ego in the arena. We need to hunt, conquer and capture something, and we lure guys do it with artificial baits because we want to be an angler more than a fisherman. We want to understand and provoke a fish more than we want to wait on them to eat something. Nothing here against the organic folks, it's just a different religion.

The religion of fishing with artificial lures is a self-imposed science, the study of fish behavior and how one might better deceive nature through effort and trickery. Izaac Walton fueled much of this idealism back in 1653 with his book The Compleat Angler. He wrote that the true angler is, "one who fishes for the love of fishing and that catching fish by sporting means is far superior to other methods of fishing." To him, "sporting" meant fly-fishing. Yes, it's fishing, but with a self-imposed handicap. Likewise for lure fishermen, it's not about what you throw as much as it is figuring out where, when, and how you throw it. It's the luring part of it... not the lure. Let's look at some examples of how to determine what the fish are doing, and then pick a lure that might work for the moment.

What do we really need out there? Well, we need to cover several bases, but it doesn't take a big tackle box to do that. We basically just need a few tools that will get us to where the fish are. A few soft plastic tails with jig heads of various weight and a couple of topwaters will do most all of what we need to do. The whole key is knowing when to choose what, and after that, where in the water column it needs to be and how aggressively we need to work it. Other than figuring out where the fish are and what they are doing, it's mostly about placement, size, and motion. Just to impress the idea, others have had similar thoughts, like William C. Vogt in his 1928 book entitled Bait-Casting. To prove that it was the motion of the bait and not the bait itself that attracted fish, he wrote of catching bass on everything from a carrot to an ear of corn and even a turnip. If we really want to embarrass our shopping selves, there's a certain guide in Port Isabel who will put on a clinic for you by using a house key or a nose-rigged jalapeno. With all this in mind, let's try to get application specific.

Lures: As far as topwaters go, we just need something with a big presentation, something delicate, and then something in between. Many will work, but my preferences have been MirrOLure's She Dog, Rapala's Skitterwalk, and then Pradco's Super Spook Jr. With just three baits like these we can address most surface applications. Color? Most in my box have little paint left on them... and they keep working. I find myself using the bigger presentation (the She Dog) in a few specific situations. One is where the bait is up, active, and predators are obviously feeding. Another is when it's a totally down period and I'm just trying to jack a fish up from structure through shear agitation. Usually, but not always, I also reserve it for off-colored water, high wind /choppier conditions or in deeper water over about thigh-deep or so.

For most 'normal' situations, when we don't need something quite as loud, or there is danger of spooking fish instead of calling them, the Skitterwalk has been a good all-around bait and can be worked in various ways, from spanking it hard and throwing water to dead-stick still. It's just not as obnoxious as the She Dog and its size makes it appropriate for many situations. For more subtle work, such as shallow, clear water, any time the fish seem skittish and easily frightened, or when the preferred forage is small, the little Super Spook Jr. can often wreak some serious havoc. Again, the biggest challenge is reading your fish. Are they in an aggressive mode, neutral, or negative? Watch other activity for clues. Are the birds up or buttoned down on the shore? Is the bait acting threatened or just happy-jumping? Often, just a small change in presentations will change the entire session. That's where the fisherman in us needs to come out.

For subsurface work, again, we just don't need all that much. In fact, we can all take a lesson from the many minimalists out there such as my partner Capt. Tricia. She and many others would just as soon tie on a tail and be done with it... much preferring to concentrate on presentations rather than puffery. These types of anglers are production oriented, and trust me, they produce. In terms of keeping things minimal and practical, there is nothing that beats a jig-head screwed into a piece of plastic. There are a ton of choices, but the pair that qualify as most practical are the swimmers and rat-tails. Good examples of swimmers are the Brown Lure Mullet and Norton Bull Minnow. For rat-tails, the time-honored Bass Assassin, Brown Lure Devils, and Texas Tackle Factory TTK-II make the box. Each of these baits have their own application, but what we are really looking for is appropriate sink rate and presentation speed, easily adjusted by the jig-head weight. A 1/16, 1/8, and 1/4 ounce will cover most situations.

The decision governing when to use a paddle-tail versus a straight tail, again, is a practical one. For example, in shallow water, where you may only have a ten inch clear zone between floating grass and growing grass, a paddle-tailed swimmer makes sense because you can fly it straight and don't need to jig it up and down for action. However, swimming baits don't cast as well without help from the wind. So again, trying to be practical, when casting distance is critical, the straight-tail may get the nod. If the fish want a bigger profile, the bulbous shape of the TTKII can do many things based on the weight assigned to it. On a 1/4 ounce head we can probe depths, and on a 1/16 we can almost fish it like a Corky. (The Corky family is a different subject. It is a very versatile bait but mostly reserved for when we are targeting mullet eating fish. More on this later.)

As far as colors go, that's a highly controversial subject. We do see times where they will hit one flavor before another. However, on a consistent basis, they certainly look for, detect, and react to motion, which seems to trump other factors. In choosing, the question is more of "can they see it?" That's where contrast comes in, and does it fit the setting? There are many opinions, but I usually get away with something light, something dark, and then something neutral and non-threatening. Examples would be black or plum, white, and the dependably producing, low key pumpkinseed. I make the decision based on water clarity, fish activity, or basically, how much contrast do I need for them to see it without shying away from it. It also doesn't have to look exactly like the bait they are eating, just fairly representative. Remember, we're addressing the instincts of a spinal stemmed predator, not rational thought.

The gist of all of this is that lures are just tools. They still require a craftsman make them work. The biggest craft will always be reading fish and their attitudes. After that, presentation skills are what turns a fisherman into an angler. It's deceiving nature through effort and trickery, so don't be tricked by the lure salesman. Let's remember to be the Indian, be practical, and try to concentrate more on what we are doing with our line than what we are tying on it. Izaac would be proud!