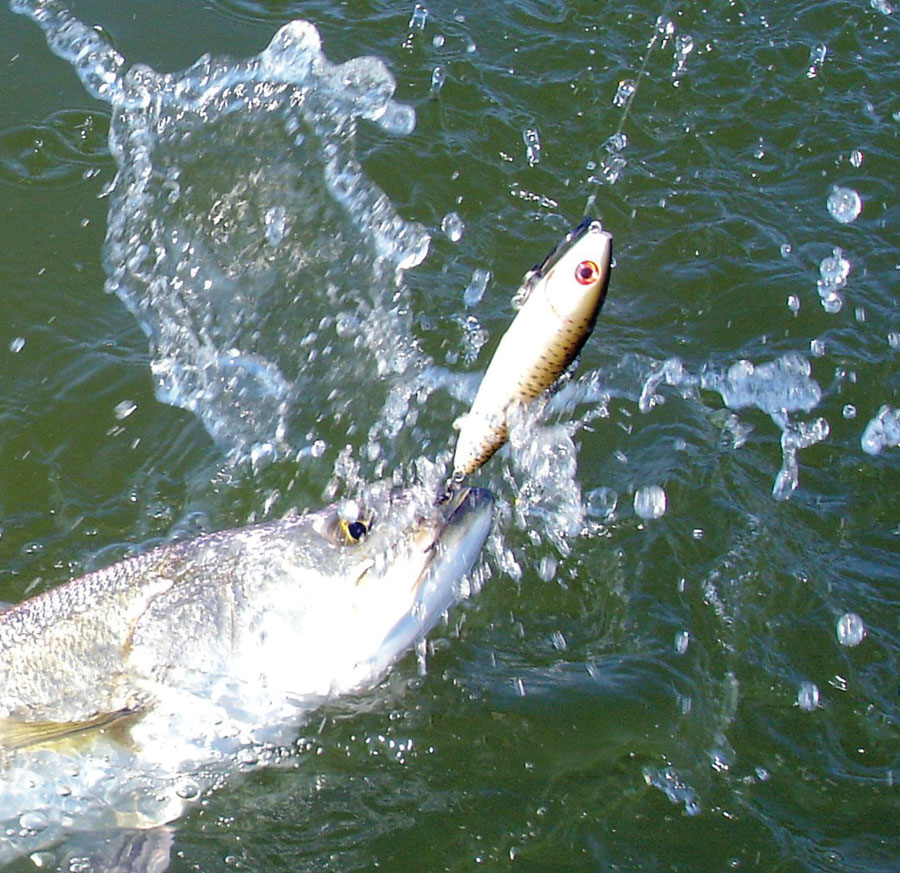 Aggressive, neutral, or negative? Once we figure it out we can choose wisely.

Inquisitive lure chunkers will often begin their fact-finding with queries related to the right color. Men, especially fishermen, have always been fascinated with color, even though the male brain comprehends little beyond black and white. What the'yre really seeking (though even they perhaps do not realize it yet) and what they'll eventually get around to if you will oblige them, are clues that would reveal the right presentation. The color of the lure itself is but one of a host of considerations and rarely the most critical by a long cast. When we learn to better estimate what the most practical and highest-percentage tool might be, that dazzling array of colors seem to run together and become rather drab.

The word "practical" here suggests a sensible approach to a particular situation, the one most likely to produce the desired effect. Strong opposites would be ideas that prove inefficient, useless, and incapable. Now, nobody wants to be a useless fisherman, so let's try to throw what's best to get a job done. That might be hard to decide, however, without first understanding exactly what that particular job is. The black and white answer is, "To catch fish, dummy," but many factors can help define the best tool for the situation. To choose correctly we first need to go through a discovery period to determine exactly what card we need to play from the hand we have been dealt.

Personally, the discovery process is what this lure fishing game is totally about. It's not only what drives my passion but is perhaps the most critical factor in preventing our becoming that useless angler. First we need to discover where fish are; then we discover how to catch them. It's find them, assess them, then address them, and hopefully gaining and packing away some tidbits of knowledge to apply next round. We would like to think this is all about a battle of wits, and it certainly can be, but not against the fish - they have none. The guy we have to beat in most fishing situations is us.

Let's assume we have already found some fish. Now, we need to evaluate two basic but highly critical factors before we tie a good knot. What is the present attitude of the fish, and how does that play with our current conditions? Fish seem to be in one of three basic modes: aggressive, neutral, or negative. Are they high in the water column and feeding, low and lying down, or somewhere in between? We can try to interpret some of the easy signs for a first best guess, but the behavior of baitfish and other creatures is only one chapter of a large book. Reading all the clues of nature is a complete and fascinating science all its own.

Once we figure out what our quarry is doing, we can choose wisely which lure might effectively get into, and stay, in the strike zone. The sensible question now becomes what can I get to them, under these conditions, at the right speed and depth, with the appropriate level of attraction? Conditions can include much, but obvious considerations are wind speed and direction, overall surface conditions, water clarity and depth, current or lack of, and of course the overhead canopy. Is it raining or cloudlessly blue? Others include physical speed bumps such as shaggy grass or snaggy shell. It may seem too complex to decipher, but it's not really rocket science after we fully define the challenge. Most questions are answered by simple adjustments in weight, size, contrast, and tease factor we can apply. The color deal is simply one part, basically pertaining to contrast. Before reviewing a few scenarios, let's look at an example of choosing poorly.

We were standing thigh-deep and throwing up-current across a shelf that tapers deeper. Some chunky trout were hovering low, casually picking off shrimp being swept down a handy little serving tray. The water was thickly sanded so good contrast was in order, and a fair current called for some balanced weight. A dark soft plastic rat tail made sense, and a quarter ounce of lead seemed perfect to hop it across the bottom at an enticing pace. After racking up a seven fish to zero lead, I look over and find that my angling hopeful was pulling on a little bitty, but pretty paddle tail screwed to a 1/16 ounce lead head. It was struggling pitifully on the surface against the current, and as he winced again upon hearing another of my grunting hooksets, I smiled and asked if he thought he was getting in the strike zone.

OK – color me stupid, but I don't think we can depend on pretty alone to get the job done. Let's try to boil this down to common sense, which is what it really is.

Let's say we find ourselves in some rather murky, dead-calm knee-deep water, watching finger-sized shrimp skipping franticly to avoid aggressive swirls and giant sucking sounds. Practicality would suggest a small and high offering, with just enough presentation to call them up and not run them off. A little shrimpy-acting, bone-colored Spook Jr or the baby Skitter Walk sounds suspiciously capable here if we snap it around like a shrimp with lots of pauses rather than jerking it steadily forward. You wouldn't want to throw a big rock where a little pebble would do, and it probably wouldn't matter how many colors of that obnoxious She Dog we try, any color will probably spook them as good as the next.

Wind always dictates choice in various ways, and often overlooked is lure ballistics. When no wind is available to assist your woefully neglected reel, land a lure where it is needed, and a soft plastic makes the most sense. Should we be throwing a paddle-tail that catches a lot of air or go to something more aerodynamic like a straight tail? Just that simple move, adding a few feet to your cast, can make or break your day. And the same adjustment can apply to chunking into wind. Many situations call for throwing directly into it, such as towards windward structures like a reef, spoil or shoreline, up-current into a gut, or perhaps the best stalking angle for sight-casting visibility. Pink will probably not cast farther than plum.

In heavy chop, where we can see eight-inch mullet getting blown end-over-end across whitecaps, we might consider dropping a sinking or suspending lure into the swells, but the reality is that we'd likely end up fishing below the level of opportunity. That's where the Queen of Obnoxious Behavior, the MirrOlure She Dog, might better disrupt things. I probably wouldn't throw a pink Corky here just because it's pink... or because I beat 'em up with a Fat Boy the day before.

In many areas, especially from the middle-coast south, we often find big fish in little water. Compounding this situation is usually some amount of grass; rooted and floating. Our presentation zone shrinks to a few precious inches.

Captain, oh Captain! I can't keep my lure out of the grass!

Well OK, let's start by ditching that gumball jighead and the snap swivels. With a working zone of barely a foot we need something that is easier to control. Unless we can defy gravity, a swimming soft plastic will fly flatter than one you have to jig. And if they seem to want a full-meal deal, a larger suspender like a Corky Fat Boy can be walked straight through the center of that dividend-paying margin. More about grass, it really doesn't matter what color those treble hooks are; they're all grass rakes; bring on the single hooks.

These are just a few small samples meant to encourage more careful thought before tying that next knot. Back to color for just a quickie – yes, there are times when it matters, but only in terms of can they see it or is it too much? In truth, something light, something dark, and something natural gets most everything done, and some colors can qualify in more than one category depending on water clarity. Our favorite pretties can wiggle right in there, but the more critical path is usually knowing when to try what, and especially how to get it where it needs to be.

Choosing lures with high chances of success is not much different from the philosophy of playing good pool or golf. We can hit hard and hope, or shoot precisely and maybe put a little spin on the ball.