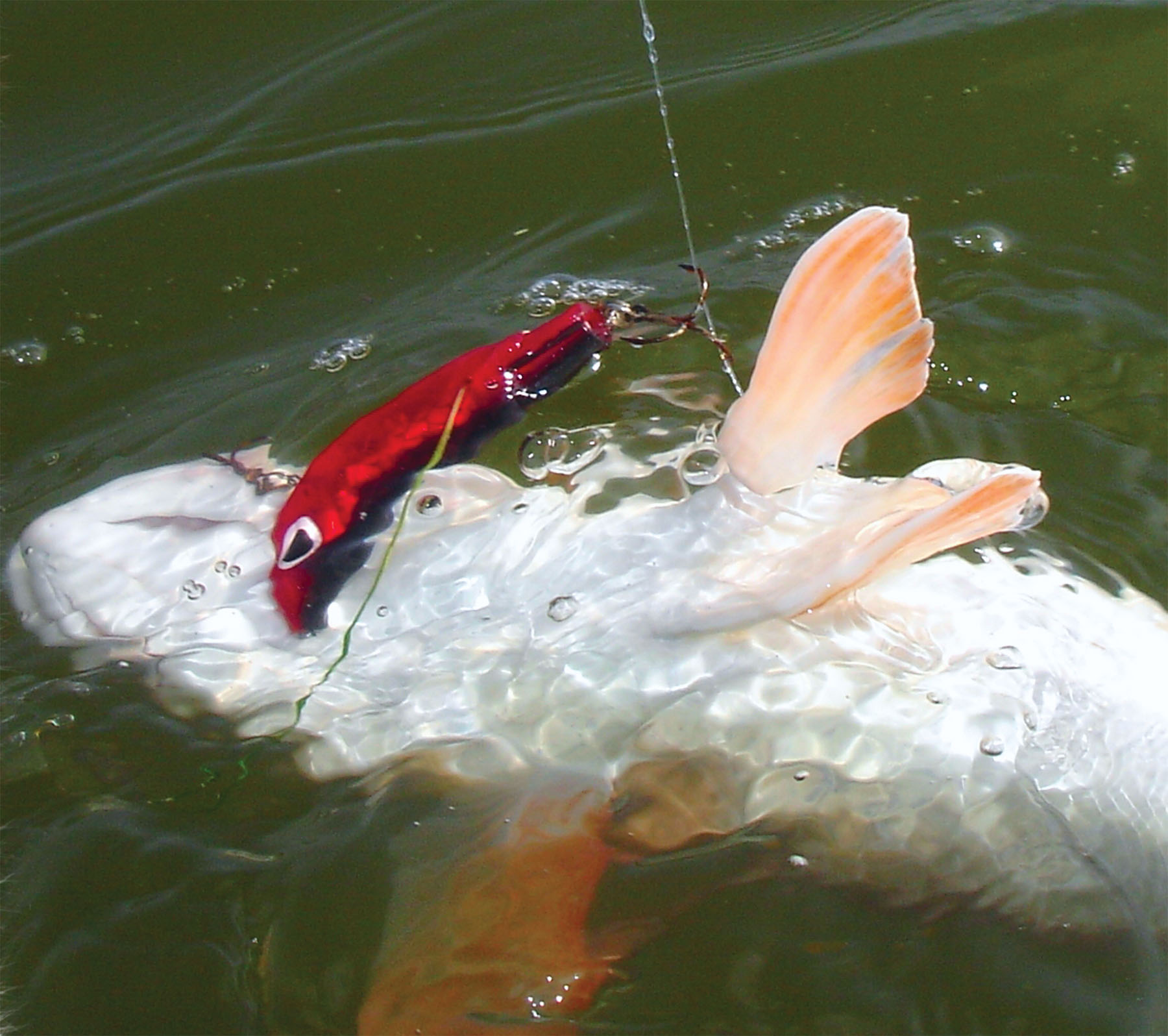 This is why using a leader can make good sense.
I remember several years back when a day of fishing did not quite go as well as planned. A series of simple things ended up wrecking the whole day, but unfortunately, all of the events were self-imposed and highly preventable. As a full-time guide, I get to see some of the same stuff happen on almost every trip. The calendar says it's March and many of you are coming out of hibernation to hit the water again. It's time to look over your gear like you mean it, and if necessary, head on back down to the store. We don't need a bunch of stuff, but we do need the right stuff and we need it all to work. Here's another small reminder that it's forever the little things that can have a big impact on our highly coveted time in the water. It's called being prepared (or in this case,not being prepared), to take advantage of what nature had to offer.

On the day in question, the comical events started early, but escalated quickly when a big trout suddenly shattered the quiet world in front of me. After four hours of nothingness (plus a two hour drive, a forty minute boat run, and what seemed like four thousand yards of hard won muck), it finally looked like a good bite was going to happen. It probably did, but I didn't get to stick around long enough to find out.

This trout came out of the water with a violent surface walking headshake, a classic sign that she was deeply hooked. Sure enough, the plug was hopelessly lodged in the far reaches of her throat. I reached for my pliers, but horror of horrors, they weren't there. I desperately wanted that particular lure back too because I didn't have another one like it. (You know how it is with plugs–that was THE one for the moment and the only one I had full confidence in.) When I went to string the fish, the stupid spike on the stringer broke off. I pushed the cord through raspy gill plates with my fingers and then tied on a lesser option lure. I also remember being cock-eyed and frustrated all day while trying to peer out of salt covered sunglasses. I had gotten them repeatedly splashed and didn't have a dry thread on me to clean them with.

In the next humorous instant, the front sole of my left bootie flapped half-open. I had to start high stepping like I was wearing clown shoes to avoid tripping over little chunky humps of grass. I tripped anyway, and shoved my reel, and my forehead, directly into the stinky mud. I tried to swish the reel clean and did, but on the next cast, all of the line balled up on one side of the spool. The pall on the level-wind worm gear failed. When I finally got back to the boat, my back-up reel screamed like a short fingernail on a long chalkboard. I promptly found an empty bottle of reel oil to fix it with. Soon afterwards, my hat flew off my head while running to another spot. It was way too skinny to shut down so I had to leave it lay. When I got home I looked like a burn victim because I had neither another hat nor appropriate sunscreen aboard. It was worse the next day because I had called in sick to work and then showed up with a bad sunburn.

All of this (and a little more I didn't mention) could have been avoided and some good fish probably caught. Let's remember; life is short and time on the water is precious, so let's go through a short checklist of what I'm seeing show up at my slip in the mornings. It just takes a little time to ensure a better day, so in no particular order, here are a few items to check which may help to make sure you don't get a little mud on YOUR face.

Pliers: This is an often overlooked but an absolutely must have tool. Drop the five more dollars for a real pair of stainless pliers with good cutters, and then make sure your wading belt keeps them where they are supposed to be.

Lures: It doesn't take much time to turn your trusted plugs into nasty pieces of rust, but it used to take a lot of time to restore them. Keeping them flushed and clean helps, but you may have a big surprise waiting for you when you open that box after several months. If they get away from you, there's an easier way now thanks from a tip by Capt. Ernest Cisneros. It's a bathroom cleaner product called "The Works". Spray it on, let it sit, then simply rinse clean. We have been enlightened and amazed (plus it's also the fastest, no hassle way of taking all stains off of boats and all sorts of other stuff).

Next step is re-hooking. Put some good points on them. Many lures I see the guys tie on are about as sharp as a #2 pencil eraser. We have gone to Gamakatsu black nickel, and are putting on those single hooks we have been talking about on everything we can. Aside from the increased safety factor, they work as well if not better than trebles. Be sure and carry two of the lures you can't live without.

Vision: It may seem like a simple thing, but if we can't see we can't fish, not well anyway. There are several good glasses out there ranging from bargain prices to ridiculous, but polarized glasses are one of the most important tools we carry on the water. For inshore work, amber or vermillion lenses distort color and greatly increase contrast, making that color change or grass line much more distinct. Everybody has their preferences, but after sampling just about every pair brought down by clients, we chose Maui Jim's because of their extreme quality lenses and customer service. I used to see fuzzy things I thought might be fish, but now, thanks to their no-line prescription HCL Bronze polarized bi-focal lenses, I can just about count scales. Treat yourself to a real pair of shades, and be sure to start buying those boxes of lens cleaners by the gross. I think they're about $2.50 per box and worth many days of clear fishing.

Stringers: Who would think that they make a difference? They do, especially as far as time savings and extreme frustration go. Some of the standard off the wall stringers are so limp and wimpy that it takes twenty minutes to untangle the resulting mess back at the boat. Find a stiff, thick gauge stringer with a sharp, well attached spike on the end, and your day will be much less complicated.

Headgear: A hat is a hat, right? Wrong! A dark under bill cuts an amazing amount of glare, and a good Velcro enclosure makes them stay put comfortably. However, in reality, the traditional ball caps do us little good when it comes to sun protection. One day I'll find a big brimmed hat that works in a boat. By the way, it is extremely bad Karma to wear a golf hat while fishing.

Sunscreen: Sunblocks don't work if we don't have them, don't use them, or if the bottle is all dried up. We need themjust asked my new surgeon friend. The best we've found which actually works in South Texas extreme is made by Bullfrog. The gel is a chemical block and needs to be put on well before exposure. The titanium is a reflective block, needs to be put on heavily, and makes you look like you've eaten a cake with no hands. Bring it.use itit helps us survive.

Rods: Again, there are a lot of good rods out there, but whatever we own needs a good going over. Cracked inserts, missing inserts, rusted and loose eyes under the wrapping, hairline cracks in the blank itself, can all cost us a day on the water. We chose Fishing Tackle Unlimited's All Pro Series for a lot of reasons, not the least of which is because they are light, strong, and won't let you down. Full titanium eyes mean no rustever. If you break this rod you did something wrong, but they'll take care of you anyway with a lifetime warranty.

Reels: I can't tell you how many decent fishermen show up with inadequate reels. Not the brand, but the care. Screeching bearings, sticky drags, half a spool of old, over-sized line, and any number of ill-maintained symptoms will ruin an effort. Casting well, besides being on top of fish, is everything.

Tying on a leader: Some do, some don't, but even in areas clear of line cutting structure, the back side of a barb is an ever present danger. It's cheap insurance, and we tie on a rod's length of twenty-pound fluorocarbon with a line to line connection. There are several knots, but the double uni-knot is reliable and hard to mess up.

There is a ton more to talk about; such as properly fitting waders and booties, packable rain jackets, you name it, but this was just a sample meant to encourage the process of getting ready for what looks to be a great year.Life is meant to be awesome. Fishing helps, but only if we are ready to make the most of it. You really might want to look at your stuff before you too trip over a good day. See ya there.