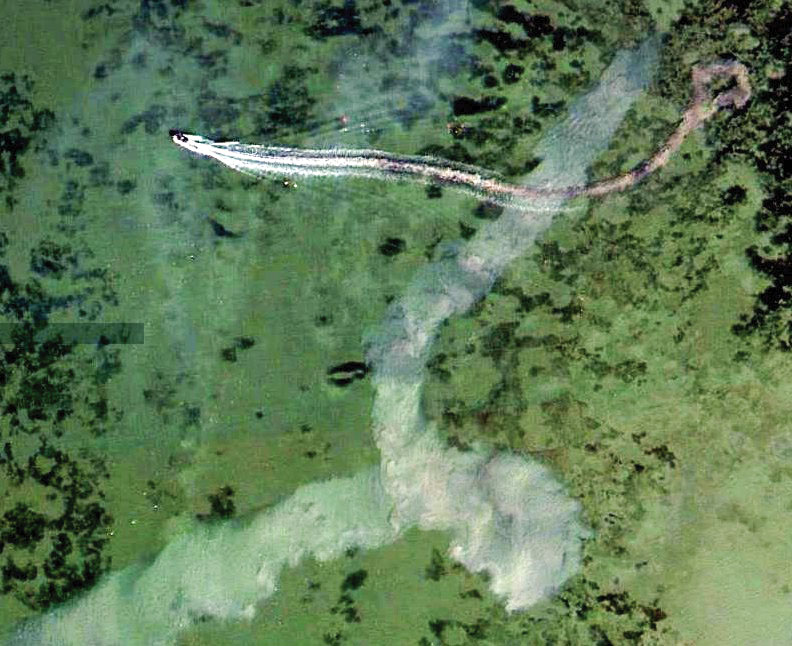 Busted!...on Google Earth no less. C’mon man!
Few pursuits are more inspiring for me than cruising clear shallow flats searching for the mysterious. Must be that child-like exploratory nature in all of us and things can get quite intoxicating while running shallow. Unfortunately, an exploding saltwater fishing community thinks likewise. And now that the purple sage has bloomed, so have the boat ramps. A question for all users - How long can our precious flats survive this fascination? And for some of the less fortunate How long can an outboard motor stand it? Let's look at both, with a few common sense observations. In many respects they go hand in hand.

The crazy explosion of boats and boating hype these days has made it compelling for many to push their shallow-planing hulls to the bragging limits. Unfortunately though, many operators will learn the reality of such limits the hard way, and often take some of the environment, their fellow fishermen, and perhaps even their outboards with them. It's amazing to see just how many don't practice "clean boating," which should be the primary responsibility coming with the privilege.

First off; does your boat really belong on those sensitive flats in the first place? It's distressing to see how many are out there that don't, and Google Earth is a handy place to view the indiscretions. In reality, most of those holes we stumble upon when wading aren't natural. They are blown into the seafloor by props during shallow takeoffs and trenches made as boats struggle to get on plane. Many areas viewed from the air look like alien crop circles. It can only get worse if we don't address it. And if we don't, some government agency surely might.

It should be obvious that the "long shaft" crowd has no business up shallow, but even if your hull supposedly does, most manufacturers publish best-case scenarios concerning draft and hole shots. In their defense though, I highly suspect they rely on the buyer to have a bit of common sense and several optional factors will affect overall performance. An overloaded or poorly propped boat can make us destructive in more ways than one. We see it daily. What it boils down to is you wouldn't take a Cadillac luxury sedan where a Jeep is built to go, so let's first make sure your ride is worthy of the intended road.

Let's say your new hull can actually run in the advertised "spit." Great - but for how long?

Many don't consider or perhaps even understand that an outboard's lower unit generates a tremendous amount of heat and therefore requires cooling; which by design is accomplished via conduction (submerged), not convection (jacked so high that it receives mostly spray). With insufficient cooling the gearcase temp soars and the gear lube loses its ability to protect the moving parts. Pretty soon you are down and grounded and nothing insures it quicker than prolonged runs across the flats with the jackplate as high as it will go. Cavitation plates can help and are mandatory on some hulls, but it is still wise to raise the motor only as high as necessary for the water depth at hand.

Another point to consider is that good water to the powerhead doesn't necessarily mean good water to the prop. I'm sure you've heard that unmistakable staccato of outboard exhaust bellowing above water every time the bow hits a swell. Every time you hear that, it probably also means the prop is cavitating, coming unhooked for a fraction of a second. Prop blades are brittle and intolerant of continued flexing during cavitation, and there are few ways better for tearing up a set of drive gears. So, again I ask; Does your boat really belong there?

One big false-confidence factor comes from, "Hey, no worries I have a low-water pick-up!"

Well, anybody who would say that does not understand that low-water pickup only works while underway and making way. Outboard water pumps are basically submersible pumps and their greatest ability is pushing water, not lifting it. What this means is that during a shallow water takeoff with the motor jacked high, the pump is very slow to prime. No flow and the hot horn say's you are not going anywhere for a while.

Another huge consideration for staying out of trouble is not running skinnier than you can float. Some rigs are more vulnerable than others, but floating summer grass can easily plug your water intake and then you are calling for help way out on the flats. Now you're really down. Kinda like getting your 4wheel drive stuck, who can come get you?

Let's say you do find yourself getting into trouble, running shallower than you should. This can happen easily without specific local knowledge, poor visibility, changing tides, etc. One of the most common mistakes folks make when they start bumping bottom is hammering the throttle. Especially on a tunnel hull, the prop can only eat what it's fed, so trying to speed up can easily ask for more water than is available. Do that, and you suck all the water out of the tunnel and then you're down again! The correct move is to maintain engine speed and make a very gradual turn toward deeper water. A hard turn will cause the hull to lose lift and the lifeblood stream through the tunnel will stop.

The greatest infraction I see people making is trying to get a boat up in extremely shallow water. It's not uncommon to see them slinging muddy rooster tails 40 feet for 40 minutes. Whether ignorance, low technique or high ego, poor form is damaging to everything sacred in the water. Again, showering down on the throttle or trying to dig out with shear horsepower will only worsen the situation and leave unsightly scars.

Here is where less is better, and even some V-hulls can get up quite shallow if done correctly. The trick is to ease into it, get the boat moving slowly to feed water to the tunnel and gradually increase power. Spinning up can help but beware of churning the seagrass. Some boats want it left and others right, but in any case, weight distribution is critical to get the prop clear of the bottom. I actually get up shallower with more people onboard. A turn angle of about 45, everybody up front and left, and an easy throttle increase will usually get me out of whatever stupid I've done. Trim tabs help as well to momentarily force the bow down during takeoff and proper propping is critical. If y'all aren't propped for the purpose, call Louie Baumann at Baumann Marine Propellers. He can get you very close just over the phone.

What should be common sense is that if you can't get up quickly and easily, simply drift-push-or idle to deeper water. However; and here we go again, it's amazing to see people idling too hard and causing the boat to squat, digging a trench for half a mile. Worse is failing to move as much weight as possible to the bow. C'mon man!

Another word to the wise - always carry a spare prop. Pushing the hole-shot limit, especially on a hard bottom, can easily spin a hub and then, here we go again.

There is so much talk about dangerous crossing situations, rights of way, "storks" on consoles driving with their feet and no kill switch, avoiding drum lines, and giving fellow fishermen a wide berth but what about the fish you're spooking half out of their hide and what about the seagrass?

What's interesting to me is that over the millennia man has had access to some of these shallow areas for only a few decades. We can and will change things for better or worse but let's try to remember that we are Texans and we revere our heritage. Think of our precious flats like the El Camino Real, the "Royal Road" the pathway that made incredible things possible and life better for many. It would really suck to see historical markers on the flats one day, saying "Here is what use to be."

Let's be smart and take care of this royal road. It's a privilege and a responsibility.