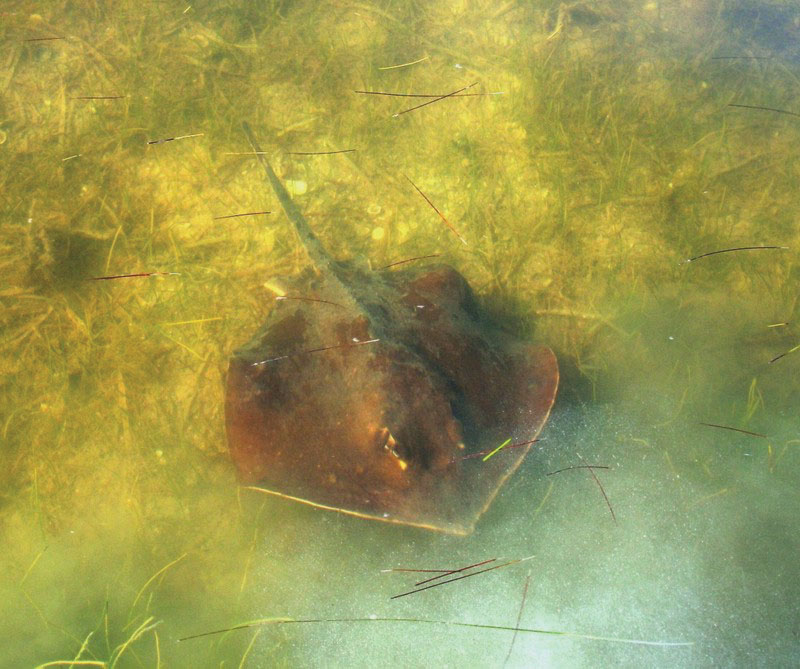 This is one time rays are your buddy.

There are times when the cool factor really stands out and anytime your most recent experience was as good as your first it probably qualifies. I remember one particular first event like it was yesterday and it changed a lot of what I thought and did. A similar event actually happened again for me yesterday and, believe it or not, has happened more than a few times lately. When conditions are right, and with some vision and planning, a cool factor like this could be available for any who go a-looking.

Years ago during my old drive-up fishing days, long walks back to the truck were mostly uneventful after you had strung whatever you thought you were going to. This day was no different, but while glancing down to avoid stingrays something strange caught my eye. I wasn't sure what, but it stopped me dead in my tracks. I darn near froze in a stupor as the strange object morphed into a huge fish just laying there, not 10 feet away, where nothing was supposed to be. I actually got off two casts, and as the beast was sliding off, two more appeared out of nowhere. I had never caught a fish that big and never dreamed of seeing one so shallow much less three. Just seeing them was awesome, and no, they were not reds. Trout bigger than life itself, and my fishing world began to change. Although I haven't tried to stalk and sightcast trout much in the past few years, I am excited again and have been doing so whenever conditions and clients converge. I hate to overwork the word but it is truly awesome, and with realistic chances when we apply ourselves.

Mention sight-casting and the default image of a redfish tail pops up. Trout though can offer some big opportunities as well, and for many fishermen the experience can be far above most expectations. Seeing a big trout close-up can make the hair on your neck stand permanently erect. And when we finally figure out that yes we can, and then we do, it's akin to a spiritual awakening. It just depends on what we want out of this fishing life, to catch a bunch or to catch 'em cool. With a little focus we can often do both. Let's talk about what might be out there that many have yet to explore.

To begin with, why would trout hang so shallow in the first place? The more we fish the more we should admit we don't know. They do seem to thrive in areas we rarely consider though, and some of those areas might be right under our previously blind feet. Standard hot water trout philosophy councils us toward chest-deep water for coveted limits, but the truth says other trout exist which are often bigger. We don't know much, yet, but here's some of what we might guess about the whys and hows of fishing for them.

That long trout routinely use short water during a hot summers day both amazes and embarrasses me. (Why didn't I look harder before?) Some of this shallow behavior could be feeding opportunity, but when you find them in these settings there is often not a stick of bait to be seen, unless its something we don't know about or can't see. Who really knows, but another explanation could be avoidance of predation. There won't be any sharks or dolphins that skinny. But regardless of why they use the extreme shallows; there is probably an untapped fishery available.

Sight-casting for trout may not be as situational or regional as we have been trained to think. Despite the assumption that Texas coastal waters are too murky, I have personally had numerous opportunities in every bay I have fished, not to say that I ever really took consistent advantage. New frontiers await; both physically and mentally. Let's be more specific about some of the whats, wheres and how-tos no matter where we might try.

The most commonly sight-fished water usually laps from lower thigh to high-ankle in depth. High percentage areas are shallow breaks near deep water, with standard examples being spoils next to the ICW, shorelines with deep drops, and exposed mid-bay reefs and bars. Other opportunities exist though, and through a hot September, we can also expect better fish high on the sand or tight to other hard shorelines. They can stay skinny well into the day depending on weather. Some recent observations also suggest they go especially shallow when conditions are especially calm and clear. That might make sense when we go back to predator avoidance. One sure sign that were close is an abundance of stingrays, one time you're happy to see them. If they are there in force some large trout probably are too.

Once we start stalking, the whole process becomes amazing. It's truly an interactive endeavor with all sorts of busy critters to see, but learning to see the trout first is what it's all about. Once you learn what to look for, apparitions previously overlooked can become as obvious as a liter bottle of Orange Crush. We do need some primary tools however, and this is where quality eyewear such as the Costa 580 series becomes invaluable.

Although we need to get in the zone and be the heron we don't have to see the whole fish and often don't. Like stalking whitetails where you might see only a horizontal line where one doesn't belong or a quick ear flick, were looking for subtleties - shadowy movement, the contrast of a dark tail, a little silver flash, or perhaps a strip of grass that slowly turns sideways. Give every little deviation a chance to become your chance. Color and contrast play big, and no, not all trout sport black backs. Many blend with the bottom characteristics and many have little color at all. Some appear ochre-green in the sun - very hard to see.

Surprising to me is that many big trout are seen sitting perfectly still, and most that are moving are just snailing along with their bellies rubbing bottom. Another surprise is the amazingly short average distances at which they usually appear. You think you've scanned forever, take one tiny step, and one cruises away that you could have poked with a rod tip. Evidently they are not always as spooky as charged. Seeing them swim as pairs or small groups is common. If you see one there are probably more. Now that we better understand what to look for, let's look at some of the mechanics of the game.

Basically, we are hunting wild pigs with a .22, so placement is everything. With precision casting demanded, high quality tools are as well. Putting a lure within three feet of the target just isn't good enough. Good rods and finely-tuned reels are important to be tight under these conditions.

So what might we have tied on? Soft plastics are excellent, but there's plenty of room for other lures. Most lure decisions, however (in any scenario), should be based on what would be the most practical for the moment. Do we need more weight or better aerodynamics for casting distance, higher or lower contrast for conditions? Will a slow-rolled paddletail get it done or can we finesse a straight tail across a clear bottom? Again, lots of room here, but as you might guess, the offering must be just enough and not overwhelming. We want them to respond, not flee.

As far as the actual presentation, there are few rules but very importantly, never attack the fish with a lure. It's all about good angles, and the easiest case scenario is a fish sitting or moving at 90 or so to the line of your cast. Throw well in front. There is good noise and bad noise, so even the smallest abnormal entry splash can destroy the chance. Pull it slowly into the projected path, and if possible, letting it just sit until the fish gets close works well. A little take-away twitch or two at the right moment can make the fish react as though it spooked something up. I used to think most of these shallow, clear water fish were non-catchable, but many will actually jump all over a decent presentation. One excellent approach, skill based but not that hard to master, is working upwind - sun permitting. We can often sneak up closer, and yes, you can cast into a good wind. It just takes some tuned equipment and a tuned thumb.

September is a great month to try. With lower winds and late season spawners within wading range, sightcasting for trout is very realistic. Don't think your home waters don't offer opportunities. Confidence is what keeps us wading, so with a little vision and belief they are there, we just might walk ourselves right into a whole new passion.