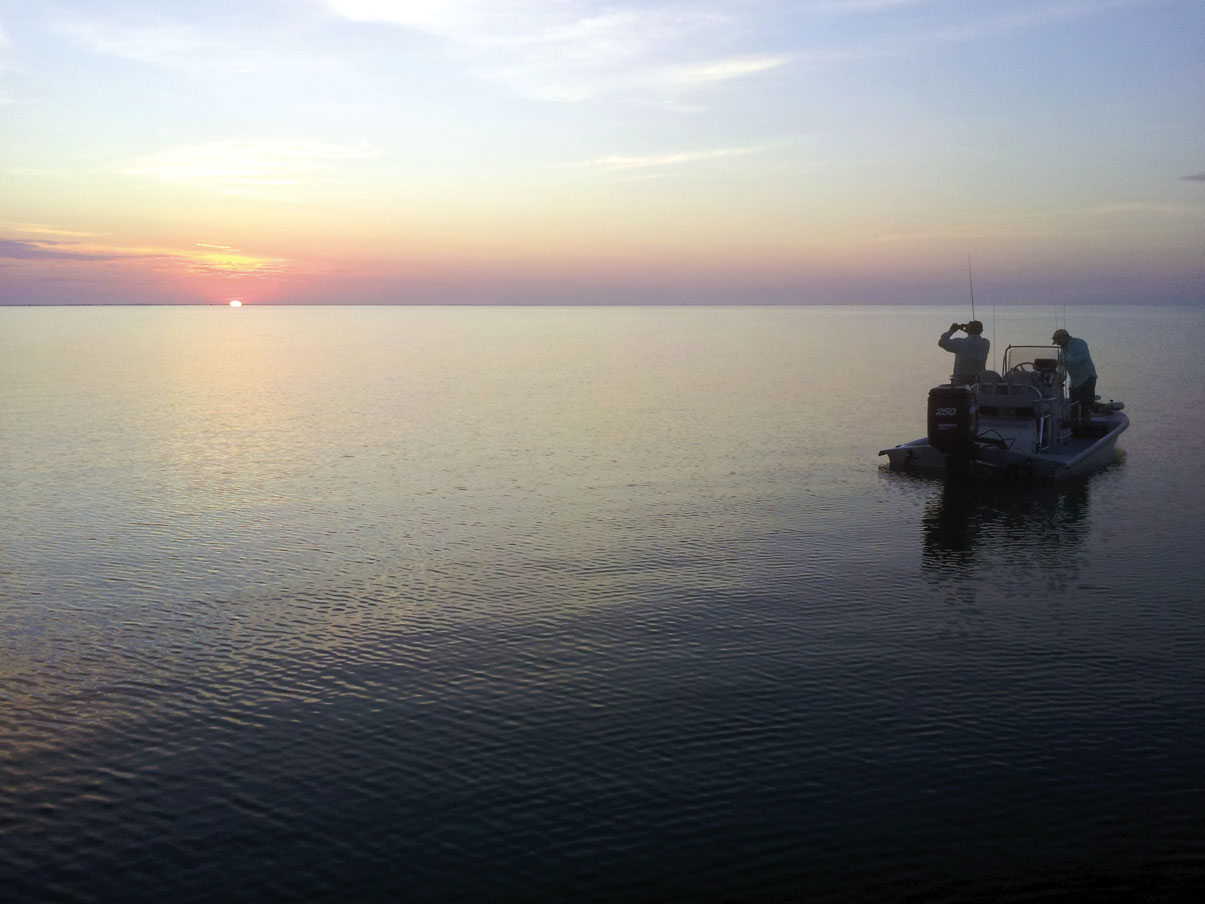 However, I have been rudely reminded recently that NOT fishing can also make us a bit glassy-eyed. I have been virtually cast onto dry land for better than a month now as my father suffered a rather severe stroke and there have simply been more important things to do. Reality checks can often be good things though, and since I've had some time to stare, I just thought I'd share a few things I may have seen out yonder in that vast, reflective distance.

For me anyway, it's delusional to even think I can write about fishing, unless I've been fishing. Quite uninspired and close to deadline, our editor offered some support.

"Hey, I'm here to help," said he. "You have written a lot, so why don't you just go back and perhaps see how things you once thought important may have changed, and how other ideas might still apply."

That turned out to be a welcomed, perhaps even realistic assignment, until he just had to punctuate it with, "You ought to be able to knock that out pretty quick."

Well, alrighty then. I'm glad to see that I am not the only one who gets a bit delusional at times. But I did poke through some stuff that I had once typed enthusiastically, if even with three fingers, back as far as 1999. And sure enough, there's a bunch of "stuff" that could use a little revisiting. So here are some things that I think have changed in general, a few more that have changed for me personally, and then some other basic observations that will just probably never change.

In general, the most obvious change is trying to accept how much our water world has shrunk over 15 years. New technology coupled with more people able to shake hands with the banker man has left little out there to the imagination, or unmolested for that matter. In other words, it's getting harder to fish anywhere along the coast without the roar of an outboard motor overwhelming the subtle clunk of a topwater.

There basically are no secrets anymore. Opportunities all come with much higher price tags, and fish patterns are changing right alongside the up-tick in the participation curve. There is really no solution to this problem, save perhaps the sage advice of one Sam Caldwell, who during a tough day turned to me and said, "We just have to learn to manage our expectations a bit differently." There's another that needs no further explanation.

Another general observation is how this sport has morphed from one of basic solitude to what sometimes appears a great clanging and banging commercial industry. I remember when a decent topwater was hard to find but now there are more out there than we will ever have time to fix a knot to. And those tiller-steer tin boats; hell, they got blasted into history by 300 ponies pushing top-drives emblazoned with bizarre graphics. Gone is the Norman Rockwellesque innocence. What did Caldwell say?

In seeking refuge below the water line, there are definitely a few opinions I feel I have earned the right to, and some have evolved with exponentially more days of water time. We all know opinions are cheap and we all have to climb the leaning curve, and if mine doesn't stay steep I guess I'll just take up badminton.

Some of my opinions ended up being absolutely silly. Such as believing soft plastics were only "numbers" lures. I used to call them rubber croakers. "Heck anybody can catch a fish on that." And what about, "If you catch a big one on that worm it will be by pure luck."

I honestly used to think you didn't really deserve a big trout unless you threw topwaters, a 51 or 52 MirrOlure maybe, and then definitely a Corky after Wallace nailed the state record.

Wrong-Wrong-Wrong! Sorry, that's old thinking there, pal. I've since learned that the lowly soft plastic rattail is one of the most versatile tools we can use. "What's in your wallet?"

Another infantile assumption was that you needed a big bait for a big fish. Well, I eventually learned that an elephant WILL eat a peanut. And, many times, the old adage that "less can be more," especially in delicate conditions, will bring big fish to hand when they may not otherwise be catchable.

In my earlier years many of us thought we had to fish "low and slow" during the winter, and that topwaters were mostly unrealistic until that "magic 70 mark." I have to wonder how many big fish we missed by probing low when we should have been pulling high. Now, as soon as the air becomes warmer than water, I am going to float my expectations every chance I get.

We also thought we always needed to fish deep in colder water. Eleven full-time years in the Lower Laguna has taught me differently though, but for some reason many still think fishing shallow is just a regional thing. If I only would have known, how many times we stumbled across ridiculously big winter fish, ridiculously shallow and ridiculously cold, all the way from Sabine to Sergeant. I would have applied the concept earlier. No more explanation needed here either.

Thoughts I've had to personally reboot are just too numerous for this format, but there seems to be equally as many concepts that will probably never change. (Some actually apply to fishing.) Facts can be stubborn things though, and certain universal rules shall never be breached, unless we want to acknowledge the definition of "delusional" one more time.

One is that the words always and never should simply be culled from our fishing vocabulary. Especially when fishing with lures, when you think you actually know something, actually think again. There are no absolutes but, perhaps that's what keeps us trying to find them.

Without question, one thing that will never change is that some folks will always catch more than others and some will always struggle, even side by side with the same lure. In staring at that baffling horizon I have to wonder whether that's just natural selection at work. But hey, the fish need a chance too, but we can always help our own chances. Angler or fisherman? Yeah; discussion ended there also.

Another constant seems to be that beyond stupid blind luck it's all about knowing when to be where. Unfortunately, that's reserved for the leaders, though the followers often reap the same benefits, just on another plane.

What is that old maxim... maximum results for minimum efforts? While that definitely applies to we lazy humans (read potlickers), the same rule applies to fish as well; Nature being the thrifty girl she is. But, if we'll try to remember that rule we'll catch more and bigger more often. Indeed, that may be the one major key to understanding how to be a consistently accomplished angler. Or, we can just go-a-fishing instead.

Just a couple more and we're out of paper. As far as lures go in general, regardless of the myriad choices available today, certain basic rules will always exist. Leonardo da Vinci said, "simplicity is the ultimate sophistication," and that definitely applies at the end of our line.

Besides the big first premise of getting on fish in the first place, when we find the right depth, size and speed for the moment, we can probably catch them on a habanero pepper. It's all about presentation.

Regardless of hype there is no magic bait bullet. In my opinion, we mostly catch fish between our ears first or, we can be Bullwinkle the Wonder Moose and keep changing lures every five minutes, looking for that "maximum result for minimum effort" thing. The ultimate goal should be learning how to fish instead of trying to learn what we can buy to make it easier.

One more. The premise of "never leave fish to find fish" is sometimes actually attributed to Moses in about 1200BC. Wow, 300 ponies back then might have been literal, but regardless, I think we catch big fish only when they let us catch them, so with thatwell, sometimes we can get lost in that horizon. If you know you are on good fish, chances are low that if they are not biting here, that they MIGHT be biting over there. What was that about being an angler?

One thing we can always count on is change, both good and bad. In fishing, circumstances and situations will certainly change, and we can either change with them or... well... here comes that delusional word again. We just can't put it in a little zip-lock pouch, but we can sure look at the horizon occasionally for a reality check. If we are not catching the fish we want to catch, there are two basic solutions. Either "manage expectations" or "become more creative."

I sure hope I can get back into the water soon so I can do some of both and I'm just dying for that subtle clunkof a topwater.