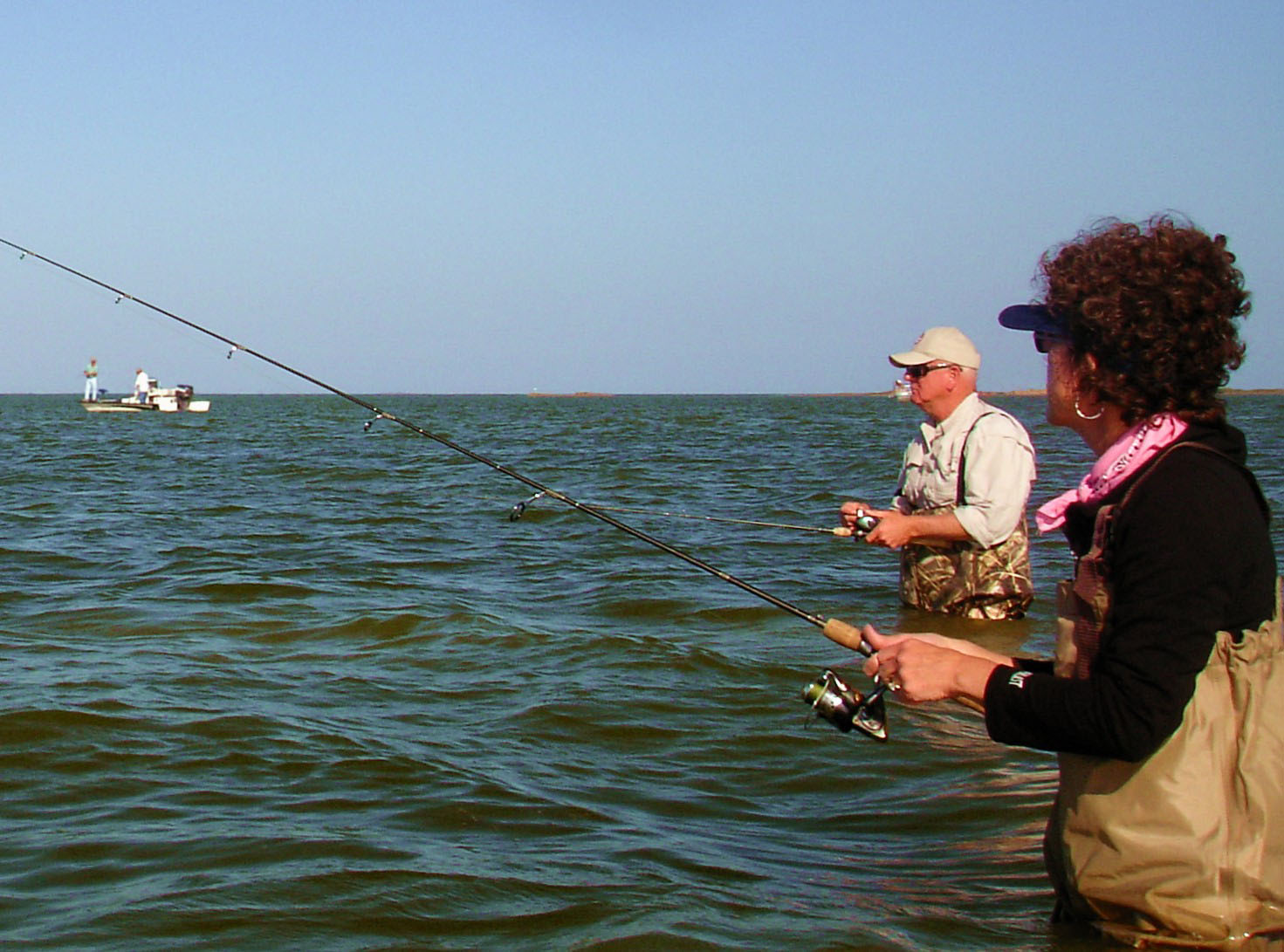 Our reaction says a lot about character.
The fish gods occasionally smile upon the faithful. Last week was everything fishing was supposed to be, but in the meantime, several other 'enlightening' moments happened which will inspire wonderment for times to come. It was indeed fishing in heaven, but was also very close to the gnashing of teeth in hell.

Capt. Tricia and I were out on a rare personal day. Even though we greatly enjoy the thrill of sharing with clients, this day was ours alone to wander and cast at will. A brisk norther from two days earlier had reversed course, bringing with it an eerie blanket of haze down to the waterline. The setting was a warming gray sky, nearly breathless winds, and no other boats in sight.

Myriads of geese, ducks and pelicans were happy flapping in the shallows, and rushing wings occasionally filled the sky in concert with distant twelve gauge thumps. It was an incredible display of waterfowl, but the surface seemed sterile and void of active fish sign. Still, they should be there. We put the Power Pole down on a tapering edge and intended to eliminate water from shallow to deep until we hit what we were looking for.

Capt. Tricia was immediately out of the boat, easing forward along a traditional path and probing the knee deep grassbeds. She was soon hooking solid trout on about every other cast. She switched to a topwater looking for bigger fish, and then began having problems keeping it away from bullying reds. I was scrambling to get out of the boat and join her, but far behind us a group of low flying pelicans betrayed bait thick enough to walk on in less that a foot of water. The surface rippled under the birds the entire length of the flat.

I went to investigate and walked into almost everything I could ask for. However, so did Tricia, and no further words were exchanged. They didn't need to be as we were both consumed in the moment doing exactly what each of us wanted to do. She was going through good trout looking for a great one, and I was intent to go through big mullet looking for that one beast. A Floating Corky Fat Boy was the perfect choice where I was. Heavy enough for great casting distance, it has a low spook factor but with a large enough profile to get noticed in an over-abundance of baitfish. Plus, it can be worked in mere inches of water.

A hard-twitched retrieve was suddenly met with an aggressive wake and explosion from an oversized red. The second found a fat twenty seven inch trout lying in a sandy depression that knocked the bait three times before swirling it home. Life was good, and the rest of the session found me stooped like a heron, expecting and getting wakes on almost every cast. In the silence I could hear headshaking and splashing from the end of Capt. Tricia's rod, and I knew that any minute one of us would stick a lifetime fish. Unfortunately, paradise can be lost.

Horror of horrors, the drone of an approaching boat grew louder and closer until finally Capt. Tricia began issuing semi-frantic hand signals. The boater yanked back on the throttle, and from close enough he didn't need to holler "Do you think you own this blankety-blank bay?" The verbal barrage continued as four waders exited into the settling prop wash. Tricia's intended signal was more of a "Hey, be cool! There's a bunch of good fish here!" Regardless, paradise as we knew it right then began to fade.

Another boat materialized, dropped a trolling motor, and proceeded to churn right in between us. The water was so shallow that half the troll motor prop was above the surface and its sputtering was obnoxious enough to lift flocks of birds a good distance away. We were still catching fish so we did the ignore thing. Suddenly, like another opportunistic gull, another boat shows up. This one, miscalculating, and lurching to a comical halt, chased away the few remaining birds.

Two other boats pull directly upwind. Their drifts brought them to within sandwich sharing distance, but before they could give us one, they fired up the big motors to loop back and do it again, leaving us in a churning, mud-swirled mess. The catching was over.

In an increasing display of human interest, a "porcupine boat" chugged painfully into the shallows a mere fifty yards away. It was a long-shafted, deep "V" vessel, and its prop cut a loud trench of mud until it reached the 'optimum spot' to exchange dead mullet for live redfish. "Porcupine boat" in this usage is meant to imply so many rods sticking up that it looks like one. Why two men need twelve rods to catch six fish is interesting. Shortly afterwards, the guy who stuck himself on the flat started shooting mud forty feet into the air. It was time to go.

That scenario is but a small reflection in a big future mirror. In an ever-shrinking saltwater world, we are not going to avoid this type of stuff, but maybe we can help to make it better. Just on the outside chance that somebody reading this is truly innocent, here are a few of the standard reminders.

Let's don't take boats where they don't belong. Among other infractions, that's how the grass gets torn up. Let's also don't use a trolling motor as an excuse to pull in on someone. Just because you see people catching fish, don't assume that's the only place fish are. See what sort of pattern they are working and try to duplicate it elsewhere. If you choose to drift into an area where other people are fishing, do it off to the side, idle away when you get close, and try not to crash into waders.

Here's one that few seem to understand the impact of; control your waders and keep them in reasonable order. Especially for guides, it's poor form to let your waders just wander off willy-nilly and consume an area so huge that no one else can get close without encroaching. Do that and it's fairly certain there will be nasty encounters.

There are many things we can mention as far as fishing courtesy goes, but we will always have those who will brazenly go through a ten item check-out line with twenty items and others who will keep their right blinker on and go straight in the left lane. However, fishermen have always had the reputation as being good people, and while poor behavior is inexcusable on the water, so are poor reactions to poor behavior. When people do cut you off, get too close or otherwise destroy your efforts, our reaction to it also says a lot about character. If you do something stupid on purpose you deserve to get ripped, but if you need to flog somebody, wait and do it off the water.

Back in younger surfing days, there was an unwritten law of 'Karma' that said if you gave someone a wave, the one behind it would always be bigger. I still believe that. Expect this stuff to happen, plan around it, but don't let it ruin your experience. Remain faithful, see you there somewhere between heaven and hell, and in the meantime, the fish gods are smiling and the catching is good!