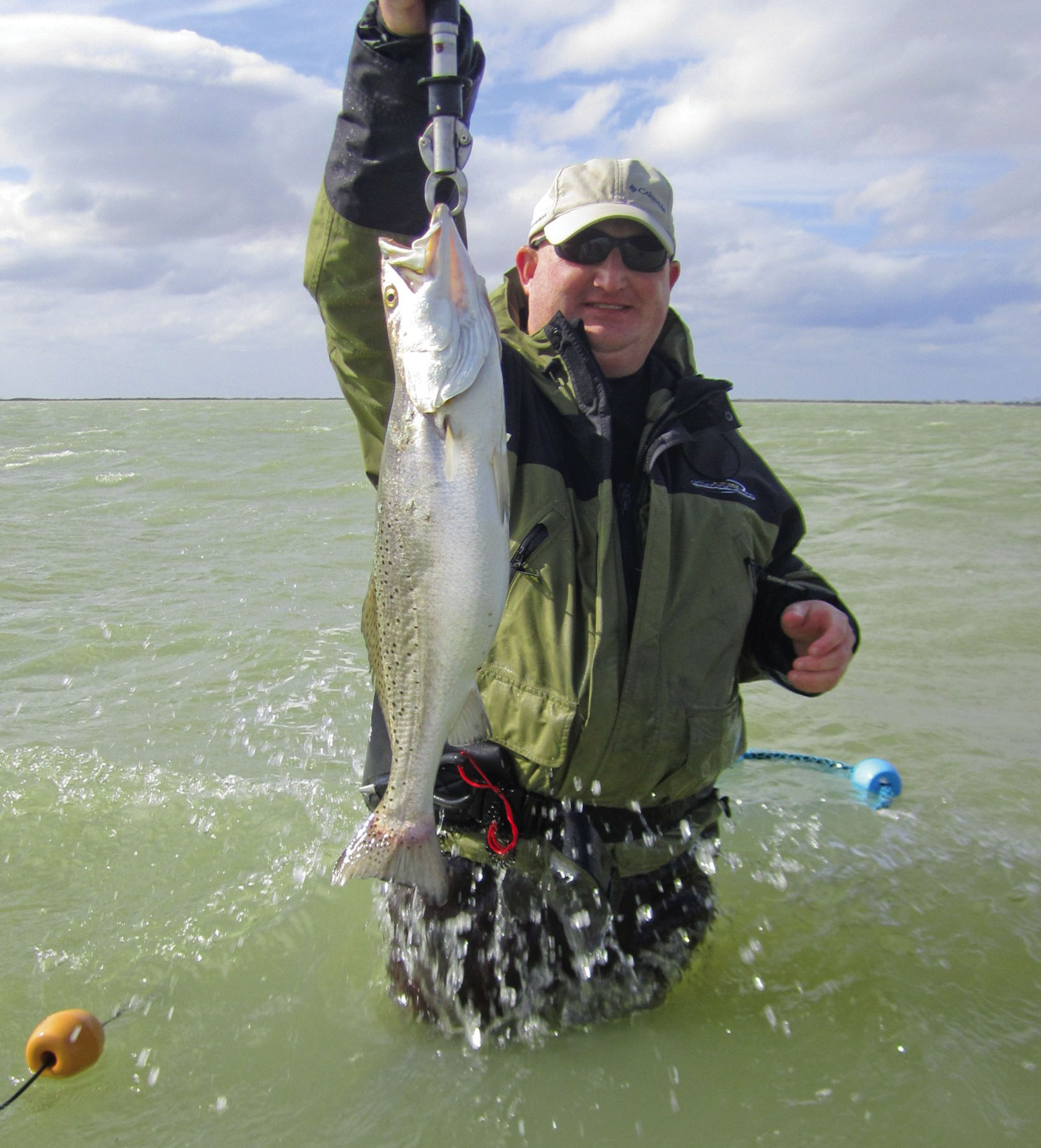 Larger fish are often found on the windward face of the spoils.
The weatherman's mystery math was dead on as usual. Whatever coastal wind is predicted, simply add ten knots and hope to Neptune the final outcome isn't closer to fifteen. The forecast called for very fishable 12 to 15 knots mid-afternoon yet there we were leaning into a steady 25 knot blast from Hell, staring at a horribly shredded bay, knowing full well the worst was yet to come. With little alternative we reached for a rabbit and ended up finding a lively one that led us to a high-potential spoil bank. The dumps worked again, even in the ridiculous conditions, and the day was saved. Many days can be saved by working these man-made fish havens and there are literally miles of them lining the Intracoastal from the JFK Causeway to Isabel. Work them with confidence and you might just get spoiled yourself by the consistently good fishing they offer. This is good stuff and worth talking about, especially during spring.

Everybody knows about spoil banks, spoil islands, and every other hump of dredged material framing the entire ICW. Plain and simple, they offer distinctive structure near deep water and can often hold fair water clarity when the wind howls. In fact, most of my better experiences on them have been during tough winds. What's also attractive about them is that they usually hold fish of all classes, from myriads of dinks to the big mamas, and everything in between. Being able to stay busy with high hopes will make any fishing day worthy. However, just like any other area, you have to know when to be where and what to do when. Let's look at a few examples, starting with the 25 knot trip mentioned.

Tony, Joe and I were scrambling. There was virtually no place left to fish after the weatherman's prediction plus fifteen got on us. Fortunately though, and as it often happens, the water in the ICW held cleaner and was lapping onto some nasty sand edges and grassy point breaks teaming with mullet. Most folks would automatically go to the leeward side, and I suppose it makes inexperienced sense given the ease of downwind casting into calmer water, but we chose to anchor and wade the sudsy side, where the wind was catching the submerged barrier at about a 45 angle. In my experience, while there are quite often more fish down-current, the bigger fish tend to hold on the windward side. I can only guess that the bigger fish get first pickings and the down-current guys get what's left. I think that's also how it works with humans... agree?

Anyway, by throwing tails on 1/4 ounce jigs at 90 to the wind, allowing the offering to be swept up onto a foamy windward shelf, it was basically a solid fish every other cast for three "wave in your face" hours. One major and highly critical piece of the puzzle, though, was using braided line. I'm not sure we would have felt most of the pick-ups using rubber band monofilament. Keeping your rod tip low to the water minimizes the wind-driven bow in your line, and once again braid connected us to fish we would never have otherwise known were there. There is simply no way I could or would ever go back to "stretching" my luck.

Continuing on, spoil banks are strange yet somewhat predictable animals. Their entire length can be considered sweet spots by default, but there are always naturally sweeter spots within the sweet spots. Unfortunately for the "anchor at my favorite spot" type of angler, the sweetest spots vary with conditions. Wading is the most effective way to find them on any given day, and this particular day was no different. We had nothing to show for the first one hundred yards of effort but we did eventually find the Promised Land.

What we normally have on any dump site is a lengthy series of small points and hooks created by erosion of the spoil itself. Depending on wind velocity and direction, usually one or the other will pay off. For example, if you find a better class of fish on a windward point for now, chances are great that better fish will be holding on every windward point until conditions change. Same thing if they happen to want a leeward hook. Wherever you find what you are looking for, they all seem to use the same type of area until something makes them move. It's like they have little pre-arranged meeting sites"OK guys, today, everybody will stage on a windward points. Remain there until you get a memo to move." Strange how nature works. This time they were on the windward points, and dark colored plastics hopped on the bottom and swept up the tapered shelf was the ticket. That's just one technique though, and again, all based on conditions.

Spoils will always hold fish but the key is to dial into the "where" for the moment. Last April, Capt. Tricia and I pulled in to a spoil bank for a quick look and discovered balls of mullet being thrashed by unknown predators. It was so violent that we immediately thought jackfish for sure. Lucky for us it was a bunch of large trout. Raking She Dogs through pods of mullet struggling in 20 knot suds gave us a score of trout over six pounds. This time they were holding on the leeward hooks and for one rare moment it was visually quite easy. You could see the activity all the way down that particular bar and it lasted for nearly two hours. But as usual, everything suddenly stopped, almost as though another memo had been sent, "Stop feeding at 2:30." (Tell me it doesn't work like that.)

That session was typical of the windward feeding pattern but it is important to note that sometimes the larger fish we are looking for will be found extremely shallow on the crown of the spoil. For example, when you see dolphins working nearby in the ICW, you can almost bet that many of the larger and wiser fish will scoot up as shallow as they can get. They will continue to feed, but they will be very spooky and this is where a long cast is required with a floating Corky Fat Boy or maybe a stealthily jigged paddletail. Walk slowly and cast to every small holding area you can see, and as Elmer J. Fudd often said, "Be v-e-r-r-y quiet."

Other areas to target, especially during low-wind periods, are washouts, guts, or funnels bisecting the spoil bars. There will usually be at least some current moving through these corridors and it is always best to fish with it, not against it. The bottom composition is usually different in these troughs than the surrounding spoil, softer and muddier. Big trout usually hold either in the middle of them or along the edges; all that is required is a bit of investigative effort to identify the pattern for the moment.

Spring winds are upon us and big fish are amongst us. Spoil banks can work under a variety of conditions, but you have to go there with serious intent to make anything happen. Six major ideas need to be addressed this spring. The weatherman basically sucks. There are always places to find fish if you are willing to work. Learn to cast into the wind. Use braid. Work the spoils with purpose. Maintain high expectations. Spoil yourself with some good decision making about where and when... see ya there!