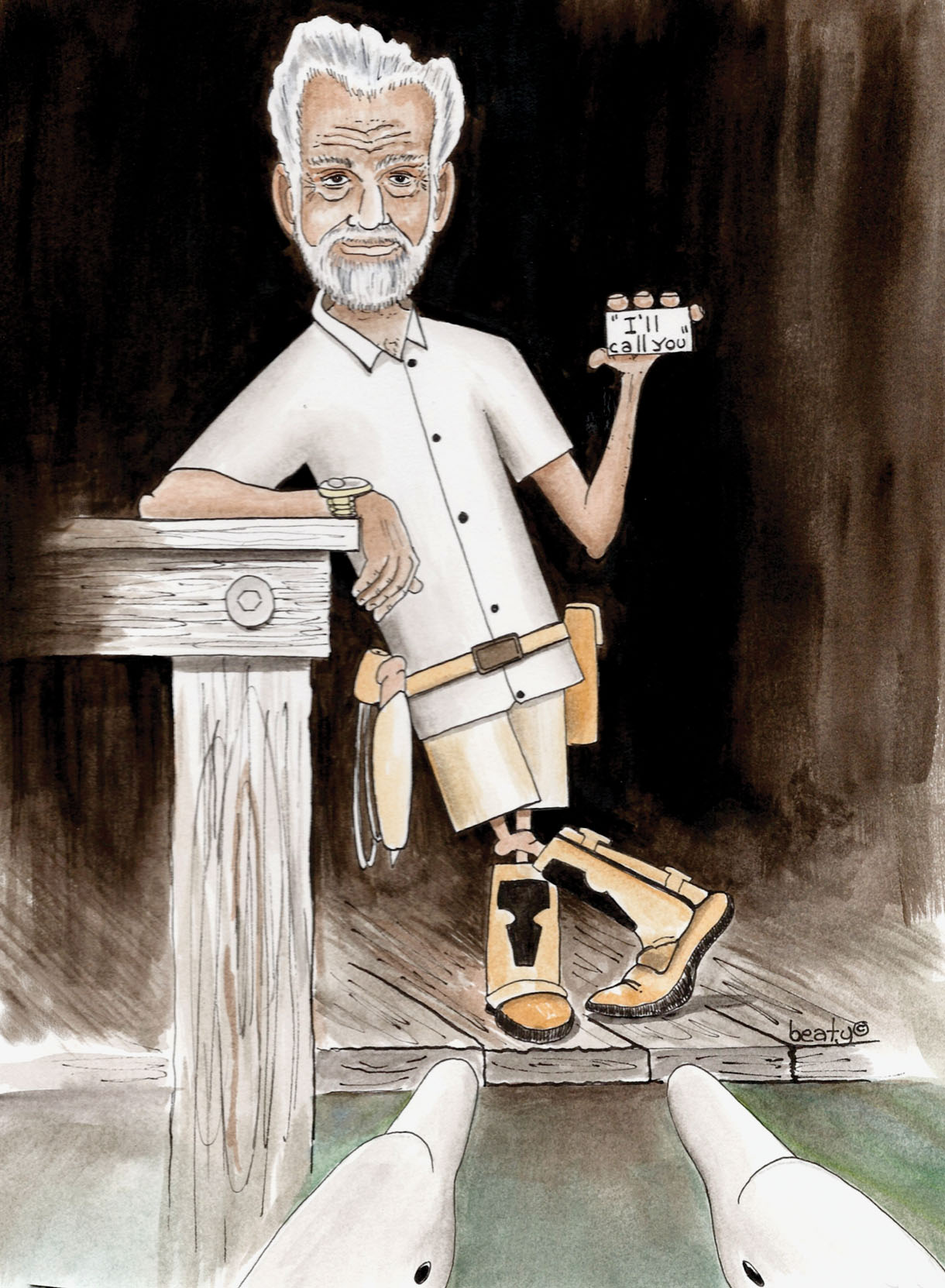 Besides fishing, the only other really fun thing to do in Port Mansfield is watching fishing people. An interesting cast of characters usually mills about, providing plenty of entertainment, especially during summer. Much of it comes from observing what fishermen have basically evolved to become i.e. the progressive coastal angler.

While in Port for yet another harrowing outdoor adventure, their more colorful antics might even resemble those of the iconic alpha male hero of Dos Equis beer advertisement fame... The Most Interesting Man in the World. Indeed, some of us have turned into the most interesting fishermen in the world, or at least we'd like to think we have.

Unless you live under a rock you've seen these beer commercials. Considered genius by gurus of advertising, there's just something about the range and ridiculousness of this character that can easily make for some laughable parodies of ourselves. A middle-aged man of distinguished appearance, rugged and somewhat handsome, flowing with stories of over-the-top adventure, heroism and chivalry, all spiced together with a resurgence of old school man-stuff steeped in gentlemanly wisdom. Loyal fans live vicariously through him, and being that the fishing world is brimming with strong egos, it would be quite natural to assume some of his achievements as our own.

Unfortunately, there is usually a broad gulf between who we are and who we think we are; our perceived self versus our real self (kinda like that overly plus-sized person putting their pictures all over the net). Being that the myth is always greater than the man, we might be able to laugh at ourselves while sailing towards those feats beyond the capabilities of ordinary men. Here are some slightly fishy parodies of things we have heard the Dos Equis guy say. See if any of it fits or if you might know somebody it would fit... somebody we could dub The Most Interesting Fisherman in the World.

He lives vicariously through himself. Yes, he is the fisherman you dream of becoming, always catching more and bigger than you while dodging danger and discovering new species. Unfortunately, there are never any pictures as he barely escaped a very aggressive bull shark that was close to the world record by blinding it with a shock from his camera battery or was that last time?

"His reputation is expanding more quickly than the universe." Of course it is, and the internet is indeed universal. I don't always embellish my fishing reports, but when I do, I prefer to do it on 2CoolFishing.com. The problem is that he usually posts other peoples' information and spots, probably yours.

He once had an awkward moment... just to see how it felt. Of course he never makes mistakes, so it must have been truly awkward when he either ran aground, ran out of gas, or flooded his truck while trying to launch with the transom straps still in place – spinning the whole rig sideways and blocking the ramp for two hours.

His shirts never wrinkle. They never will either when you truly dress for success, but I'm interested in the fact that the less secure a man is in his fishing skill, the more likely he is to dress like a fisherman. We can display our worth in either application or appearance, so it's probably best to simply wear whats practical. The fish don't care... promise.

He fought the civil war... on both sides. And very gallantly we might add. Battled hard against lowering the limit while fishing almost exclusively where the limit has already been lowered, but only by coincidence I'm sure. You also might find him atop an anti-CCA soapbox, with a paid-up STAR Tournament ticket secretly tucked away in his billfold, just in case.

The police often question him... just because they find him interesting. The Game Wardens also find him interesting in that his navigation lights were out, boat registration expired, and strangely enough, some extra trout had jumped in his boat while he wasn't looking. He is just that good!

He is left-handed, and right-handed. Quite obvious, when asked what kind of rod and reel he wants to borrow. Any answer bordering on, Oh it doesnt matter, means he has to use a spinner and being fully ambidextrous can (and will) use it upside down.

He once went to a psychic... to warn her. Because he is the most interesting, he knows where fish are before the fish do, and is always helpful to offer advanced advice even to those who fish everyday. In reality, unless you actually do drink Dos Equis, it is much safer to understand that the adage. Those who have knowledge don't predict, and those who predict dont have knowledge.

He knows Victoria's Secret. And he'll tell it to anybody that will listen, especially at a bar, and especially other peoples' secrets.

He's a lover not a fighter, but he's also a fighter so don't get any ideas. Yes, and while passively loving right in the middle of your wade or drift, don't get any ideas about saying anything because you don't own the bay. Lots of guides and tournament anglers are displaying a lot of love these days.

Every time he goes for a swim, dolphins appear. It is magic as he is one with the universe, but while fishing his immediate universe is often afloat with undersized trout due to careless hook removals, sloppy handling, and probably because that is all he is catching. Indeed, the dolphins do love him.

"When in Rome, they do as he does." Perhaps, but in Port Mansfield it may be best to just go ahead and put that local toga on. Like Capt. Tricia says, Your upper coast stuff just ain't gonna work down here. You might want to leave those 3/8 ounce gumball jigheads and such back at the home arena.

When he talks, E.F. Hutton listens. Only because he has to. Our man usually dominates all boat or dinner conversations with experienced opinion. In reality, fishing opinion is the medium between knowledge and ignorance. The more we fish, the more humble we should become, as nature will teach the honest man that his knowledge is but a smidgeon of all that's out there. And anyway... Wise men talk because they have something to say; fools because they have to say something.

His business card says I'll call you. And of course our man would never hire a guide, but funny how they sure like to call one for information or just flat-out potlick the spots the guide has been fishing. About those business cards, it's also most interesting that the more abbreviations behind their name, the smaller the tip – if they ever DO hire a guide. (He'll call that waitress though, right after he leaves without tipping her.)

He can speak Russian in French. But he can't speak Spanish in English. About blending in near the border, see advice on language below.

There are hundreds more examples of how the most interesting man got that way... and with his great adventures also comes sage advice on random topics. (Actually some aren't too bad.)

On Life: Find out what you don't do well in life, and then don't do that thing.

The bottom line is that there are some people who do not need to be guides (or maybe writers).

On Language: "Unless our whole conversation is to be in Spanish, don't lead off with Hola!'" Do that down here and prepare to be pelted with rapid fire bursts of strange words you've never heard before let alone understand.

On Going Dutch: "When you pay for just yourself, you usually get what you pay for."

And next time you don't pitch in acceptably to the table, you will be paying for yourself because you are by yourself.

On the Two-Party System: "The after-party is the one you want to attend." Absolutely, and there should never be any political leanings addressed while in the boat. We go fishing to escape that stuff.

On Life again: "It's never too early to start beefing up your obituary." This Dos Equis guy may have a strong point here. We can die boring and uninteresting, and anyone who doesn't fish to us is indeed uninteresting, so let's get out there and go for it.

If we stick a fisherman in this commercial it really does poke at our modern day week-end warrior, plus even a few other participants we can chuckle at. In trying to sell ourselves, we are all just another commercial anyway, and for whatever reason, fishermen are some of the most ego-driven out there with a lot to prove.