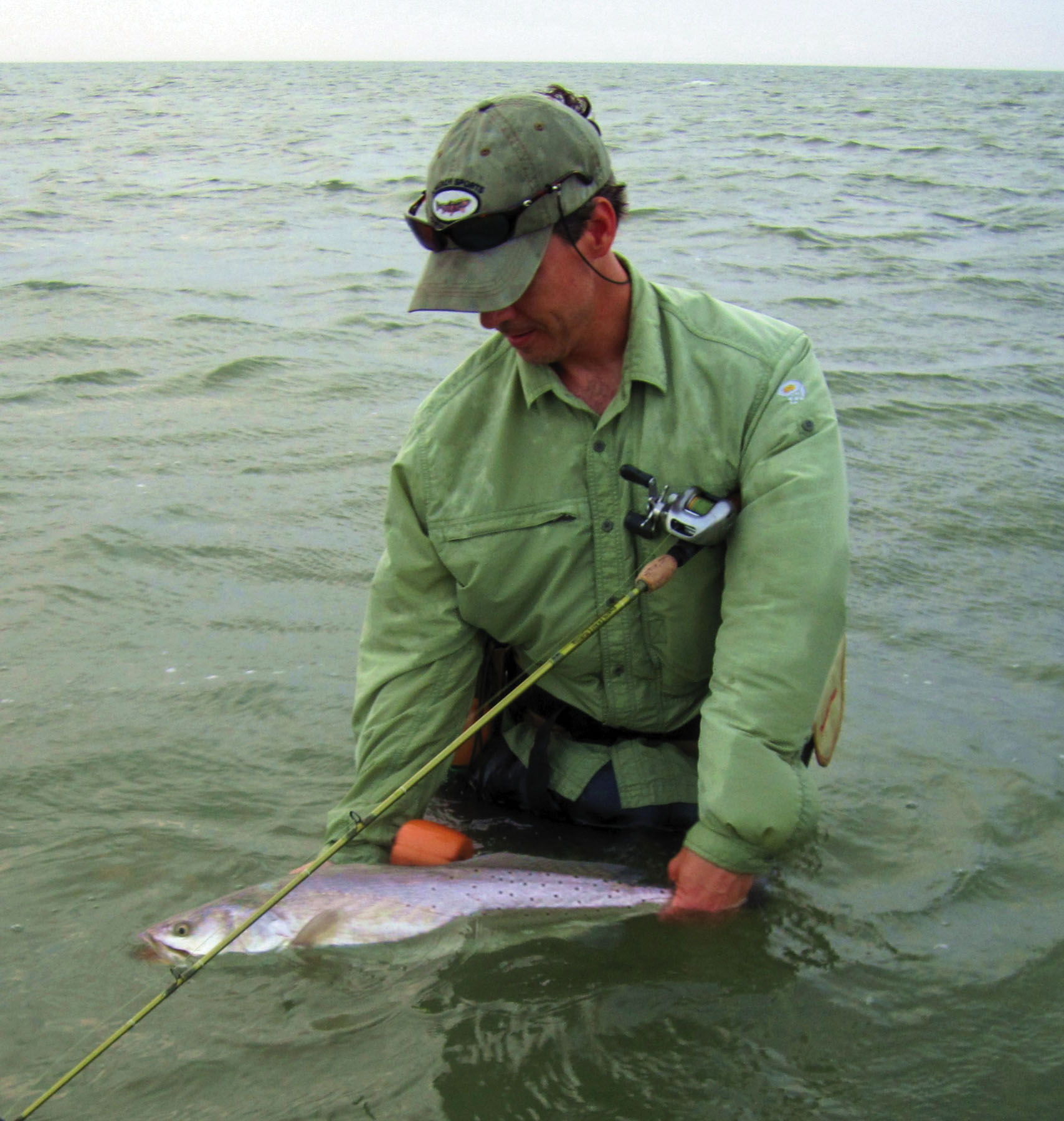 Reviving for the release; Todd says he wants to meet up with her again next year!
The guys were trotting to the dock precisely at 0530 and I was encouraged to see such enthusiasm. However, as they tossed their gear in the general direction of my boat, I realized their antics were actually survival-based; everybody needed free hands to slap mosquitoes. The wind had lain overnight, and besides unleashing the blood suckers, it also made us bead into a balmy sweat before we could even get the boat lowered. Between clammy face and forearm slaps, their unofficial leader asked, "So whattaya think Captain, we gonna slay them today?"

"Well", I shrugged with continued animated swatting, "It is what it is."

Preparing to back from the slip, I added, "The water is low and 86, all grassed up and crowded as the Brownsville Zoo, plus the winds are supposed to go to 20 knots by lunch time. Whether you slay them or not might depend on how high you can hold your dorsal fin. We are probably going to need a little sense of humor too. You ready?"

True enough, deep summer fishing is here and the catching part will largely depend on how predatory we are as fishermen and how patient we can remain with some of our fellow enthusiasts. Of course there will be a few gimmie days when everything just happens the way we want it, but for the most part it's going to take some concessions. There are certainly some great fish still to be caught, but as the renowned outdoor artist Sam Caldwell once told me on a particularly slow day, "Sometimes we just have to manage our expectations."

Back to our group of hopefuls As we idled into the dark harbor we were stupefied to hear what sounded like a kid doing donuts with daddy's truck in a Whataburger parking lot. Several other boats were squeezing past each other from the public launch and the majority had most of their lights working. Suddenly a dark silhouette appeared on full circular plane with the left gunwale buried to the rub rail. Two grown men were yelling and their engine wore no cowling. Boats at the dock were taking a beating from a two-foot wake in a no-wake zone. Above the scream of the outboard we heard one yell, "Well damn it, it worked great last year!"

With due caution we idled wide of the show, heading toward Harbor Bait & Tackle for ice.

Surprise! There was no place to tie up as boats of all descriptions were sideways, cockeyed and crack-jacked into every sliver of dock. The back porch resembled an old-fashioned tent revival with people speaking in tongues. But alas, it was only croaker worshipers lined up for live bait. Inside, another line snaked toward the counter with argument ensuing whether one should buy a one day or year-long fishing license. Onlookers, growing increasingly impatient, juggled armfuls of Gator Aid and Gulp. Excuse me sir, but did you know you were going fishing today? There should be a law about buying a license during the morning rush.

We finally headed toward the mouth of the harbor and in the process ran over a fishing line attached to a four ounce weight somebody had chunked from the green-lighted bulkhead. We got on plane, and although the wind was dead, it was quite "nautical" trying to negotiate the confused, prop-generated seas. We made it to the first stop just at first light and piled out of the boat with high expectations.

It looked awesome with a sweet aroma of watermelon rising through rafting mullet. We immediately started hooking small trout and within just a few casts Todd sticks a solid twenty-eight on a tail. As we were slapping high fives and taking pictures of the release, a porcupine boat pulled within casting distance, cutting off our intended wade; complete with stereo booming rapper thumps through obviously blown speakers. If you don't already know a porcupine boat is one with so many rods protruding that it looks like one.

A beer can floated past; a signal the area was done. We either need a sense of humor and just move on, or we can let this stuff bother us and ruin our day.

We decided to run the clear flats looking for reds, unfortunately so had everybody else that morning from their top-drives and elevated consoles, so that deal was done as well. We opted to go deeper into a color change, right where the water went from clear to murky to mud. The only problem was that once we got to where the fish were, the floating grass was absolutely ridiculous. No treble hooks here, but if you let a tail drop through the floating frustration; slow presentations (just high enough to avoid the growing grass) were met by countless numbers of juvenile fish. One out of five would make the box and everybody eventually had limits of nice little skillet fish, all despite a continual parade of boats drifting through and firing up on either side and a few out front.

"Hey Captain... there wouldn't be any sharks around here, would there?"

Everybody froze as a seven-foot bull shark cruised through stringers of trout. One of the group began chanting in a tongue similar to which we heard at the bait camp. We opted for an early lunch. Out came the Vienna sausages, a can of Spam, and various assorted convenience store delicacies. The sunscreen came out too as by now balding pates framed by skinny visors were radiating. A generous coating of titanium dioxide made most of them look like they had been eating cake with no hands, but that's OK, summer sun is nothing to mess with.

As predicted, the crowds started leaving by early afternoon and the wind started to churn rip lines and color changes. Contrary to much outdoor press theory, fishing in mid-afternoon during summer can be better for several reasons. One is wind-generated opportunity while another significant factor can be likened to the game of chess. A great strategy is to let the pawns push the fish to a predictable refuge and then slowly make your checkmate move. Efficient predators sometimes allow quarry to be driven to cover by others before slinking in themselves. It's quite gamey to look where most of the traffic has been all day, then go to the next off-colored level drop. It's also quite "shrimpy" this time of year. So a shrimp-imitating tail loped deep in the grass can be a surprising if not consistent producer on fish that were only a short time earlier terrified and driven to cover.

Speaking of terrified, one of the guys suddenly launched into a wild rendition of the Mexican Hat Dance, convinced he had brushed wings with a sizeable stingray. Meanwhile, like a light switch, just as the moon passed overhead, a major feed kicked in. Some solid trout started sucking our plastic tails, a few going three to five pounds. Without braid, though, you missed most of them as the take was very light. At least they were eating. We played C&R, thankful for the bites.

The bottom line is that summer is a time of tolerance and, if we have some, we can still win this game. Despite the oppressive and often inexperienced crowds, mosquitoes, heat, sunburns, floating grass, sharks, rays, hot water and tempers; there is still some hot fishing to be had. It is what it is; but it can still be good. We're hanging on for Labor Day when "change you can believe in" really starts to happen. Until then, I'll just try to keep my sense of humor.