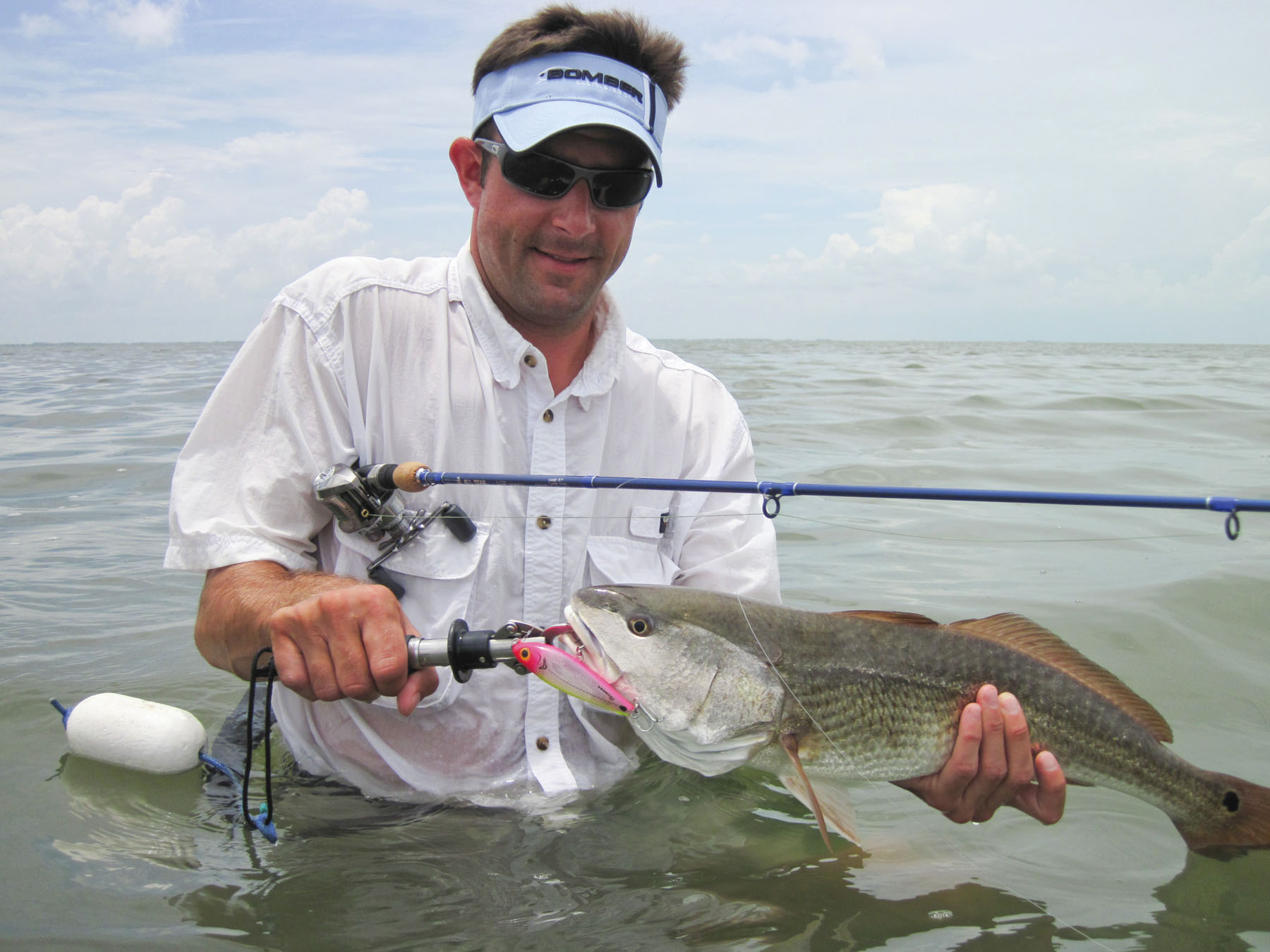 Reds love Badonk-A-Donks too.
As I have been mentioning, it's tough to talk much about fishing when you haven't been fishing much. A bum back still has me mostly dry-docked and it's gotten to the point of either I get it done or I'll be done... and there is way too much fishing yet to be done. Looks like I will finally submit to a surgeon. But in the meantime, the calendar says another story is due. Our editor offered inspiration in the form of a storyline–something I might actually have fun talking about.

"Hey Mikey", says Everett. I remember when you threw nothing but Super Spooks, even when I was kicking your butt on soft plastics. Would you care to explain that strange obsession?"

Yes, obsession is a good word, especially when you put compulsive in front of it. I was victim of a topwater spell, and for years would rather catch one up top than ten below. It started with the first big blow-up.

My first big fish up-top actually wasn't on a pure topwater. It was on a Cordell Jointed Redfin, the floater-diver we called a Broken Back, but it still counted. Not only did you feel the strike, you got to see it and hear it. That one fish changed everything and the only plastic to consider for quite a while thereafter was of the hard variety and specifically–one that floated. You felt like you were fishing for big fish on purpose, and you were.

The Redfin thing lasted for a few great years as there weren't many other options, but when the Rebel Jumpin' Minnow showed up, life took another big twitch. We were literally on top of the world with this lure and threw it in all but the most-bitter conditions, never imagining anything else as worthy of a knot. Then, for some unknown reason, the design was compromised in several critical areas. We had to search high and low for the more productive originals, spared no expense getting them, and became quite innovative restoring the old ones.

Thankfully, Heddon came to our rescue when they added a ball bearing to the venerable Zara Spook and the Super Spook saved us. It became the new magic. We've come a long way from the old "Jumper" days, but I would still like to jump the guy who tried to fix what wasn't broke in the Jumpin' Minnow. What does Jay Watkins say... "C'mon man!"

There are almost too many topwater baits to choose from nowadays, many are "special purpose" and seem only to work well in specific situations. The Super Spook, however, proved to be productive in most all conditions. If it says anything, when computers came around all of my passwords had Spook in them somewhere.

The fit and finish was attractive and didn't chip easily, its cigar shape and heft sent it like a bullet even into the wind, and it floated flat the way the Good Lord intended. It was much easier to walk and didn't leak like so many that have come and gone. And you could trust the hook-hangers if a big jack crevalle slammed it. Especially though, there just seemed to be something right about its sound. If you've ever read anything about marine or bio acoustics, there's good noise and bad noise. Regardless, they just seemed to consistently catch fish even if we didn't fully understand why.

Things got even better when the plug we'd grown to love became available in additional sizes–the much smaller Super Spook Jr., and eventually the intermediate One Knocker. Now we could adjust to many situations with the same familiar techniques, colors, and retrieves. Let's look a little closer at each size.

The original full-sized Super Spook at 5" length and weighing 7/8 ounces is the full-meal deal when big fish want big presentations. In fact, almost every tournament I've won either had all or at least a big kicker or two caught on it. Besides a string of top finishes, two lucky Troutmasters Series wins (Rockport and Galveston) came on Spooks, and also on one of my highest-confidence Spook color schemes–the Oakie Shad. I just like it, and especially like that I can see its chartreuse back in many light conditions.

Size figures into presentation in different ways. The Spook Jr. often produces when larger presentations will not. As many already know, less can be more in many cases, as there is a fine line between drawing a fish up and running it off–especially in calm-clear conditions. The Junior measures but 3.5-inches yet weighs in at a full 1/2 ounce, so it also casts well wherever you aim it. Many a big trout has fallen for this little morsel and will continue to do so.

Bridging the gap at 4.5-inches is the sweet-sized One Knocker. We needed it, and opportunity is definitely knocking via its loud tungsten rattle. I personally like that type sound much better than other baits full of BBs. The One Knocker reminds me of that old song- Stuck in the Middle with You.

Pradco is the parent company of Heddon and I want mention another Pradco plug. I personally do not have near as much time behind this one, but I watched it produce a winning stringer in a major Port Mansfield tournament at the end of Doc Saenz's line, a day when the bigger fish refused most everything else. From the Bomber Saltwater Grade stable we find the Badonk-A-Donk HP. The 3.5-incher was pure dynamite for Doc, floating perfectly flat as a mullet imitator should in the extreme skinny right on the shoreline. It just looks like something that needs to be eaten, and believe me, it will be.

Now all of these lures work fine right out of the box, but for me, a lot of plugging fun is in modification. Some of my tweaks are just plain quirky, some are practical, but all of the Super Spooks are built well enough to give the "McGivers" in us a good starting point.

One of the first things I like to do is paint on some exaggerated red gills and a red Sharpie works just fine. The theory is that it represents flared, injured gills, and being that predators are conditioned to pick off the wounded, it might help trigger a strike. Whether it really makes a difference doesn't matter that much. I believe in it and it gives me confidence, and in reality, after finding fish we catch them on confidence. And for whatever it might be worth, in many side-by-side comparisons, with and without Sharpie gills; I have noted big differences between blow-ups and hook-ups–especially on bone-colored plugs.

As far as the stock hooks go, I always like to remove the middle "belly" hook on the full-sized Spooks. I often refer to it as "desperately not needed" and in fact, I have actually lost big fish when all three trebles are used. The plug can get stuck at weird angles on top of a head, gill plate, etc., and actually get pulled out due to "leverage". With just the front and back hooks the lure just seems to slide properly home into the jaw more often. Also, nine barbs can do some serious damage to fish needing to be released.

Both the One Knocker and Spook Jr. lend themselves very well to rigging with single hooks, which can help quite a bit with floating grass. The Gamakatsu "Live Bait with Ring" variety work great and we really don't see any difference in hook-up ratios. I like to put one size larger on the front. It makes for good balance and seems to loosen the action up a bit; i.e. 2/0 up front with a 1/0 on the rear for Juniors and a 3/0 followed by a 2/0 seems about right on One Knockers.

Colors? Man, take your pick. Here again we've noted occasions when even subtle variations can make all the difference. Here comes that confidence thing again. I think it's almost arrogant to make declarations about which color scheme is best for whichever condition, though. I don't pretend to be an expert in this but if y'all happen to meet one, please have him call me so I will at least know what he thinks. Not to say shopping isn't fun, but I have honed my confidence baits to a few basics. A lure is simply a tool, and I believe in getting any job done with the least number of tools.

Basics for me are simply Bone-Silver, the Speckled Trout and Oakie Shad pattern. I tend to think in terms of loud or muted (in general), guessing that contrast with ambient light and water has a lot to do with it. Regardless, we can all have a lot of fun experimenting, early and often.

To summarize, topwater fishing is a three-dimensional experience, bound to raise adrenaline from even the dead. A thump and a tug is fine, but combining the audio-visual experience can become addicting to a compulsive level. There is no magic bait and we can't buy skill, but we can surely buy good tools. The Super Spook and Badonk-A-Donk families are good tools and have been very good to me. For some of y'all who have yet to gain confidence in fishing on the surface, the next few moons should be prime times to try. Don't be surprised if you develop a strange obsession.