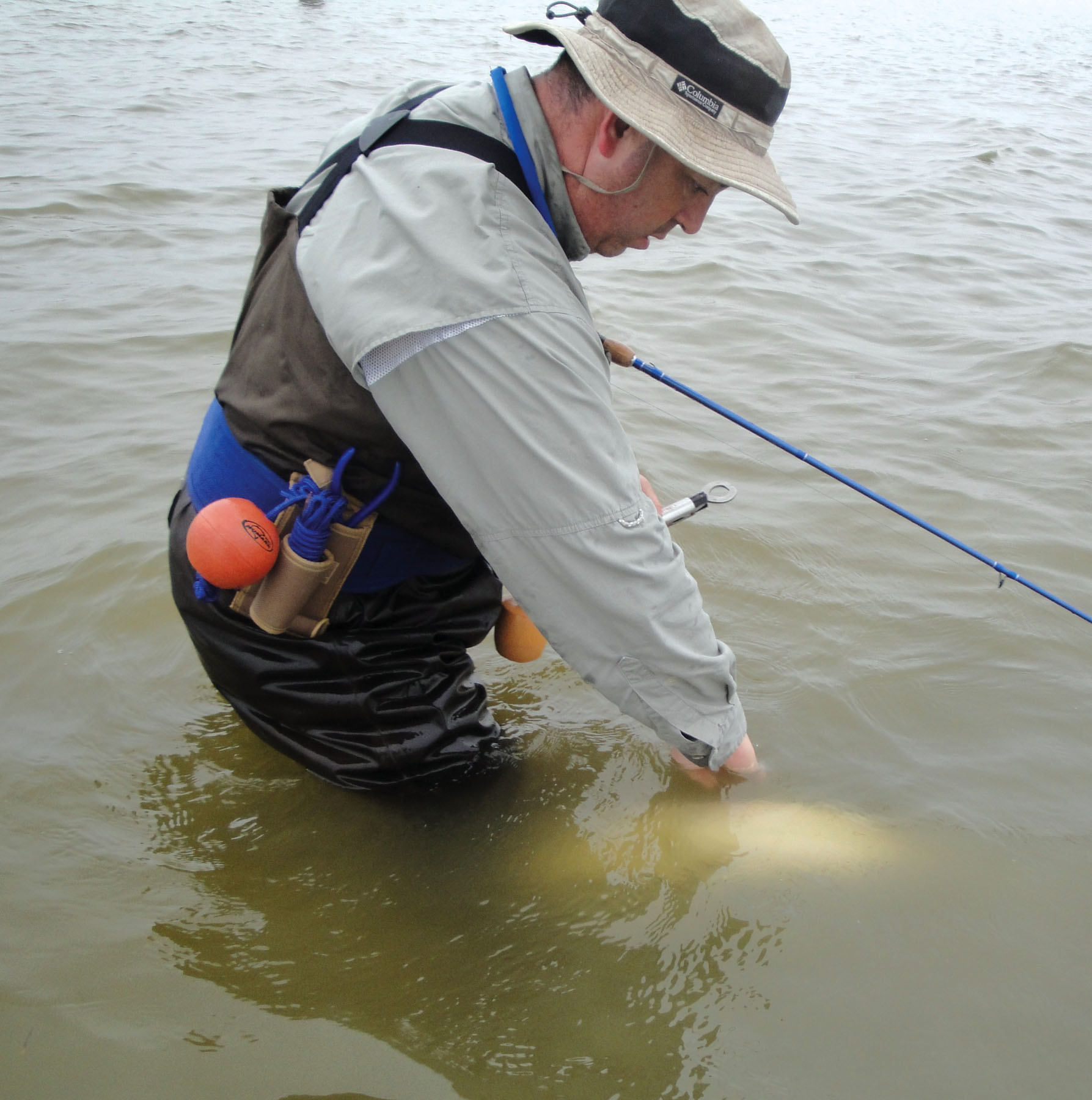 Enough clarity left for the fish to find a lure.
W.C. Fields once said, "You can't trust the water: Even a straight stick turns crooked in it."

Well, we all might agree with that one. Trying to read the water as a fisherman can create many false illusions, sometimes even convincing us that we actually know what we're doing out there. However, down here in the Laguna, the problem for now is that we can't even see that darn stick to understand how much the water is really lying to us. As mentioned last month, much of this beautiful blue lagoon has gone to brown. So, let's put our Costa fishing glasses on and try for a clearer view of this most unwelcome event.

Curtis Thomas and I just did that exactly that. He flew his party into Port Mansfield's airstrip from Lubbock for three days of hopeful fishing. We opted to launch late due to a bone-chilling nip left over from the previous day's norther. We launched his beasty, twin Baron aircraft instead for an aerial view of this invasive brown junk. We surveyed everything from the Land Cut to Port Isabel, including a very low-altitude buzz of Captain Tricia's waders. (Just to check their stringers, of course but you should see the video.) We estimated that about 75% of the Lower Laguna is swathed in varying degrees of brownness. Disappointing, but certainly not the end of the world as our catches have confirmed.

There are several strains of marine algae that, when blooming excessively, will cause the water to go brown. The stuff we have is called Aureoumbra Lagunesis, which translates literally, "golden shadow from the lagoon." It's a tiny single-celled organism and 200 of them will just about put the period at the end of this sentence. It's harmful in several respects but toxic to few organisms except a few clams and other small invertebrates. That can be big however. What it definitely does is stymie seagrass growth through inhibited sunlight penetration. When the grasses die the ecosystem deteriorates, period. Let's hope it clears out soon, but many questions about brown tide remain unanswered. Most specifically is what causes it to bloom and, anxiously for now, what makes it go away?

No one knows exactly where it came from, but it was first discovered in Alazan Bay in 1990. That particular event went ballistic and persisted heavily in the entire Laguna Madre/Baffin Bay system until the fall of 1997; the longest recorded bloom to date. Although the triggers are not fully known, it is quite suspicious that similar factors existed this year as they did before that historic outbreak. Those being hyper-saline water conditions due to extreme drought, followed with a strong left hand punch of abnormally colder water.

To the researchers, it appears that excessive salinities can reduce the abundance of other protozoans which normally graze on brown tide, keeping it in check. Cold water then kicks in and kills other creatures such as small finfish, other single-celled animals and even some of the seagrasses. A significant decaying of dead biomass seems to fertilize this brown machine with abnormal releases of ammonia and inorganic nitrogen. (DeYoe and Suttle, 1994). Let's also remember that our red tide scenario just prior, although minimal in many respects, may have contributed as well.

Also quite interesting is this particular but rather obscure quote, "Physical mixing of the water column and re-suspension of sediments are factors that must be considered as potential mechanisms of bloom persistence" (Stockwell et al. 1993).

It is certainly true that we had a massive dredging operation along our part the ICW this past fall and winter and the disposal methods were basically slurry placement of the dredged material onto both new and existing spoil banks. If we'll look at the latest Google Earth satellite imagery, it's clear how this operation silted up a lot of our water, which may indeed qualify as "redistribution of sediments." Don't know for sure, just sayin'.

Whatever causes brown tide to prosper, when it reaches the magnitude we are currently experiencing, it is a very hardy organism and actually perpetuates itself. In Bubba-speak, this basically means the worse it gets the worse it keeps getting because it has the ability to dominate the entire micro food chain.

Fishermen just have to hang on until the system regains its balance. Perhaps those long awaited bull tides of spring will encourage just that. At this writing the entire coast is reeling under extreme low water levels, so if we get that big expected push of water from now through the end of May, perhaps it can help defeat this brown monster. In the meantime, let's just fish around it and, to be honest, it really hasn't been that hard.

Yes, of course we come to the Laguna for the uniquely incredible experience offered. We can often visually count fish while cruising in her pristine knee deep waters, and we want to sightcast to them with the realistic shot at trophy class specimens. The good news is that we are still able to do that, but it has just taken little bit of adaptation. Hey, it is what it is, and flexing with nature's fickle personality is what fishing is supposed to be about anyway... agree?

The brown stuff is patchy; denser over there than over here, but it changes every day due to shifting winds and currents. Those marginally brown areas will still have plenty of clarity, especially for the fish, but there are also still some good green streaks in the mix. It may look like crap to us, but let's remember that predator fish feed for a living and have always done quite well at it. Put your good glasses on (you'll want Costa 580's in amber, trust me), and see more of what the fish are seeing. We can still decipher everything needed while running; such as active bait, grassbeds, color changes, mud boils from kicking redfish and those long ripping burnouts from big fleeing trout. I will admit we are fishing shallower than normal, but how cool to have another excuse to catch fish longer than the water is deep?

As far as technology goes, we certainly have a lot more to choose from than we did back in the nineties. Heck, we even have spoons that rattle now and topwaters that can wake the dead. Even so, I'm not sure we really need all of that stuff. Lately we've just been chunking the lowest tech lure out there in most areas (the plastic worm), and have been doing just fine. Look for those color changes, see your bait, tie on something either dark or bright, and just cast like you mean it. The fish are still in there and are very much catchable... we just still have to admit that they are usually better at finding our lures than we are at finding them.