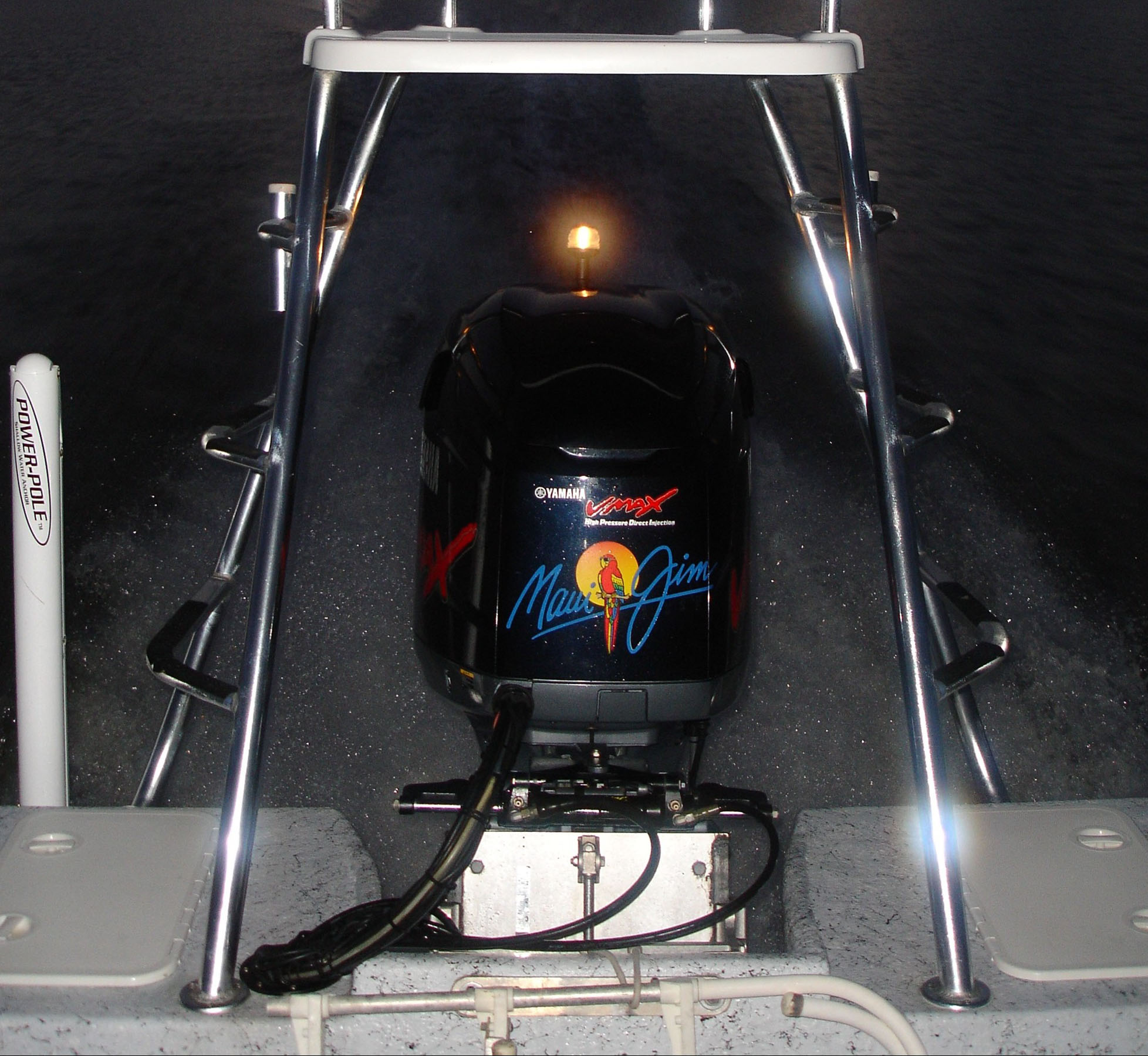 When your boat is the only light shining it can get spooky.

It seems like only last night, bobbing quietly at anchor, head resting on a mildewed life jacket, patiently awaiting the sound of feeding fish to pull me back into the water. Sleep deprivation and shooting stars made it easy to contemplate the meaning of life, but the reality of bloody mosquito bites kept most thoughts on survival plane. What in the world was I doing in this physically exhausting, cold, space-disorienting, fantasy world? I knew full well what I was doing there, and so do a few others of like persuasion; because whatever the day might mean to fishing, the secrets of the night surpass anything 'normal' people might experience.

Over the years there have been many articles written about wade fishing at night. I promised myself (and a few fraternal brothers) that I would never speak of this, much less write about it. After all this was sacred territory and not something to be shared outside the most trusted inner-circle of pluggers. I've held off writing about it for about eight years now, after doing it for about twenty. However, times have changed and most of us could agree that with a growing population of boat-happy people there are increasing safety issues at hand, and near-miss horror stories abound. I am breaking my silence.

Unlike twenty years ago we now have no-brainer GPS's lending false confidence, more all-nighter tournaments, an ever-growing "Green Light" crowd, and basically an exponential number of anglers looking for something interesting to do. Never mind the other night traffic such as commercials, flounder boats, dope runners, or slow kids in daddy's go-fast boat. We had several close encounters back then, but it's easier to get cut up out there nowadays literally. It may be just a matter of time before we read about something that we don't want to. So with that in mind, let's try to review a few trivial bits of reality here.

Navigating at night, much less wade-fishing, is not something you just casually go out and do. It took us years to master the art through many trials and Homer Simpson-like tribulations. We started the hard way with a stopwatch, compass, depthfinder, and a few well-placed reflective stakes driven in key spots just above the high tide line. By the hard way, there are a few entertaining stories which come to humble mind.

I remember bobbing neck deep for over eight hours, toes barely touching bottom between waves, waiting for sun-up after a sudden storm blew my boat off anchor and me off of a steep drop-off. The topwater bite was awesome right before it hit, though! Today you can see storms building on cell phone radar, back then you went by the ratio of hair stiffening on your neck.

I will forever deny running a Pathfinder forty feet up a soft-shelled bank near Pepper Grove Point, fooled by an un-navigable fog, no sleep, and a slow-updating GPS. I did not cower in the three-cubic-foot front hatch bleeding a slow death from intensely opportunistic marsh mosquitoes. I did have the whole point to myself though.

Neither did I punch a hole through the bow of my boat on a submerged piling along the edge of the ICW twenty-five miles from the ramp, right after a barge blinded me with its spotlight during an already blinding norther. Amazingly, the big fish fed very well right up until that one hit too.

I have never nearly frozen to death during disoriented winter wandering trying to find a lost boat, nor bounced off a reef that moved twenty yards after the sun went down. I have not, and I repeat, have not, walked five miles out of the marsh after sticking the boat high on a nocturnal sandbar, nor taken a redheaded duck in the head or a horse mullet in the face after spooking it with a spotlight going thirty mph. I have never done a diving face plant trying to avoid another nighttime boater with no spotlight. I/we have experienced many other valuable lessons, though.

Wading at night you will hear, see, and smell things the daytime crowd probably never will. Life at night can be somewhat interactive, though. Between "wall-to-wall" schools of surface-chomping fish (wall-to-wall credit goes to Rudy Grigar), you may look down to see a large redfish resting on your left bootie, or find humping dolphins doing U-turns at your kneecaps as they herd trout against a shallow bar. When they do that, the smell of trout carnage rivals any summertime cleaning table. That is, of course, if you can smell it above your own emissions.

Sharks are fun too, cruising in to check you out, leaving you bumping into each other and seeing who makes the most whitewater getting the heck out of there.

World class stingarees are interesting. The adrenaline rush of being propelled three feet sideways when an errant footstep lands on an underwater magic carpet will keep you awake.

You can also learn to fend off frigatebirds with six-foot wingspans as they try to land on your head, and pelicans are fun to unhook from the only topwater that is working.

Should you decide to address the magic of the night, here are a few other random observations:

-Despite all associated rumor and lore, full moons basically suck- except for very specific circumstances. We've walked enough of them to figure that one out. And as a matter of fact, that's how we learned about the solunar stuff and where the solunar chart you see in this magazine came from.

-Just like during daylight, there are many hours of dead period at night, but when everything turns on it is explosive to say the least.

-It's also a myth that fish always pull in shallow after dark. It seems like the most productive water, for bigger fish anyway, was universally found about crotch deep, perfect for those curious bull sharks too.

-While we're at it the black topwater at night notion is silly too. Both trout and reds have incredible detection systems and will find anything you can move in or on the water if they are looking for it, and so will ladyfish, gafftop, hardheads, and all sorts of other critters you didn't expect.

-They don't always like a lot of noise either. Even when you can't see your hand in front of your face, they have no problem picking off a clear MirrOlure floating silently across a current-swept sandbar.

We could go on storytelling and there are many topics to discuss in the hope of helping others become good night fishermen. However, I personally believe that learning to do anything well needs to come from experience, and I can't (and won't) offer that. However, there are certainly some how-to-be-safe-at-night subjects worth mentioning.

For one, a GPS is great, but so is a buddy sweeping the forward path with a spotlight. It's hard to pay attention to both, and that GPS won't show you floating logs or other wacky waders standing in the water without headlights. It is imperative to have a headlight to warn incoming boaters, but trust me, some will still not see you or understand what that little frantic light means.

Anchoring your boat means making good decisions also. You want it out of normal run lanes and with enough scope to hold it in case that bad storm gets on you which it eventually will. Reflective tape on a boat is a good thing, so is leaving your anchor light on. Although that tiny glimmer will do you zero good when heavy fog rolls in, and it eventually will.

Common sense is the best main ingredient when running at night. Rocks and reefs move, ducks fly, mullet jump, logs float, and distant lights will disorient even the best nighttime mariners. How many of you truly possess a good working knowledge of navigational lighting, such as on a dredge or tow boat, or their at-anchor lighting? These are things you will need to consider very seriously as the wrong side of a dredge is not a nice place to find yourself.

Although it cost me greatly in some ways, nighttime wade-fishing was an incurable compulsion for many years, regardless of other responsibilities or even common sense at times. It's like the TV show Planet Earth up close and personal, where you get to experience nature in its true and unmolested element, but it is not something you should do on a whim. Y'all be careful. See you there, but only if you use those lights, reflectors, and mosquito dope. You sure you want to do this?