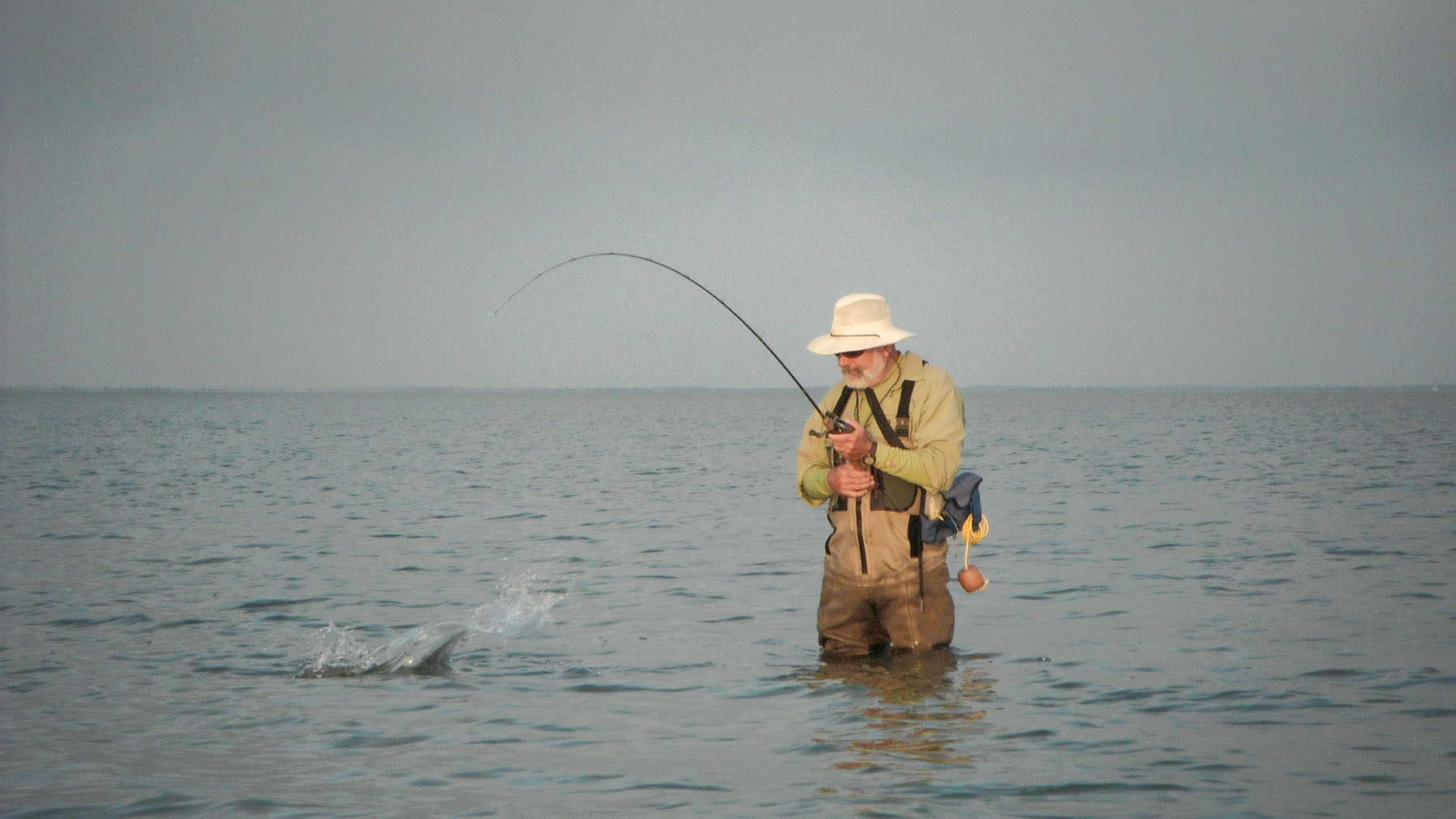 It was one of those special times where you could feel the magic in the air, a reminder that you were standing in a world far more complex than we might ever imagine. Nature was very busy for the moment, both living and dying…with electrified baitfish showering the surface and whirling pelicans framed by a setting red sun. Powerful swirls and loud flushes confirmed the presence of what we were looking for, however none of these larger trout were buying the topwaters we tried to sell. "Man, something has just got to work here!", I thought, nervously knowing that opportunity was soon to slip below the horizon.

I remembered a little game we used to play in similar settings, where we would pretend to try and "sneak" a topwater back to the rod. When fish got finicky, sometimes playing that you wanted to pull the plug thru the killing zone without it being detected by the prowling fish below would work. Painful work - taking what seemed forever to complete a retrieve, and making as little commotion with the lure as possible, but the results were often explosive. It was worth a try.

The first "sneaker" trick I played that recent afternoon got hammered within ten feet by an aggressive six-pounder. Then, just as the sun kissed the horizon, beautiful twenty-eight and a half also bought the ruse. That's how they wanted to be talked to, and to me, was effective salesmanship in the true sense.

Most lure fishermen might agree that there is little better than witnessing nature's fury on the water's surface. And if a topwater bomb going off doesn't spike your adrenaline then probably not much else will. However, based on what I've been seeing lately, it might be time for another basic review for many beginners.

I don't pretend to be an expert and can only offer comment about a few things that have worked for me in the past, spending literally thousands of hours working lures to catch trout. One of the first questions I get in the water is, "Which topwater should I tie on, Captain?" Most all of them will work at the right times and places, but the better question would be, "What kind of topwater bite do we have at the moment?" The correct answer will suggest the correct lure choice, and for me, matching the presentation to their attitude is the entire lure game - apart from finding them in the first place. Let's look at a few basic basics.

"What kind of topwater bite do we have?" means figuring out whether the fish are in an aggressive, neutral or negative mood. When they are aggressive, most any lure and retrieve can often work and everybody is a hero. Unfortunately, finding them in that aggressive eating situation is more rare than we would have it. More often they are just lying up and doing a bunch of nothing. The classic retrieve I see most folks using borders on the Big Bang theory, where if you bang a plug around long enough something might eventually hit it. I see most fishermen simply jacking the fire out of it like a rough running one cylinder Briggs and Stratton. Yes, the object of a surface lure is to force a strike reaction, but we can do better than that jackhammer deal. Let's remember that a retrieve that is too aggressive can just as easily run a fish off as call one up.

Based on what we are able to observe, is it a full meal deal event or perhaps more of a little snack time? If the fish are obviously blowing up big mullet, yes, a full-sized presentation like a Super Spook or He Dog can be a good call. Other times it can all be about a junior-sized plug - but either way the bottom line is still about matching the aggression of a presentation to the aggression level of the fish. That simply means that there are many ways to work a topwater besides trying to jerk the knot off of it, and being a truly effective surface fishermen is one of the most artful art forms of fishing there is. Many guys I see never try to dial their presentations in and don't take advantage of what a surface lure can offer in terms of variation. There are many different types of opportunities to address but it takes getting into their zone to be consistent.

For example; there is what I call an "Oh why not bite." This is the one where if you gently pester a fish long enough, it will finally kill it to make it stop. If you think (or know) a fish is lying on a little point, pothole or grass tip, keeping the lure poised there with long pauses and little enticing twitches might force that explosion you are looking for. However, spanking a big plug across that same zone fast and furious, as so many do without thinking, might be the worst thing we could do.

There are times they might want it tumbled end over end with long pauses, or perhaps snapped 90° right then 90° left making big splashes but with little forward motion. Other times it might take ripping one straight forward across rafts of mullet, yet other situations call for almost dead sticking it in rocking waves. What I'm trying to say is that being a good fisherman means being a good salesman, and that having only one sales pitch just ain't gonna bring home the bacon on a consistent basis.

In my box I might carry a variety of topwaters, but in reality we can get most of our work done with just a few. A big one, a little one, a loud one and definitely one a little more on the quiet side. For me, that usually means a Super Spook, a She Dog, and a Skitter Walk, each style plug in regular and junior sizes. After that it's all about the rod tip. Colors can certainly be important at times but this aspect of fishing lure selection can start a lot of unnecessary arguments in my book. I tend to think it's really more about "associations." Does your offering represent what they are wanting to eat in terms of size? Is it loud enough (color can be loud) for the conditions or perhaps way too much?

The lure doesn't have to be super realistic looking, but finding that balance point to correctly address them is what will set the bomb off. Many lures can qualify for the job… so basically just pick what you have confidence in and go to work.

One thing for sure, no matter what we are throwing, I think most will find better success by casting at angles across the wind or waves instead of that automatic touristy "cast it straight downwind" presentation. Not only do the baits walk better, but fish are often facing into the current and the worst angle of attack is bringing a lure across them from the rear. A baitfish doesn't normally attack a predator. Also, and if I dare say so myself, that "consistent rhythmic action" so many adhere to might be the worst possible retrieve we can try. To me, that is the anti-thesis of what a wounded baitfish might do. I remember an article about "lessons from the lizard" that made sense to me, and watching how one runs then stops in short spurts is mimicked in nature quite often. We routinely see baitfish doing something similar.

Yes, we can talk about specific lures, colors, sounds and such ad nauseam, but the reality with topwater fishing goes well beyond the simple tool. It's more about our brains overcoming the fish's, which should be quite embarrassing when we compare the two. In being a guide, it's comically entertaining to watch all the different groups work a topwater according to their "raising." An engineer for example, is usually too busy over analyzing things and tying on different lures. The politically conservative often won't vary enough, and an over-the-top liberal thinks the fish just flat owe it to them to strike. During those "special" moments, let's think more about talking to the fish in a way they will listen rather than just forcing ourselves on them. Topwaters are a magical way to communicate…agree? Y'all have fun, it looks like another explosive spring season is upon us.