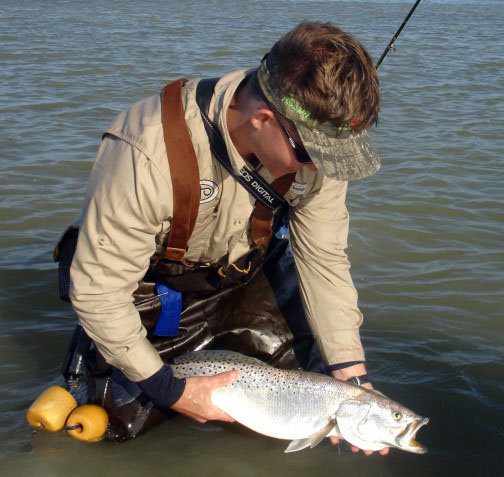 It’s nice to see somebody fishing specifically for their dreams.
I fumbled for the phone tucked deep in my waders and in the process poked the point of a forgotten jighead into my left thumb. It would be pure chance that the guys fishing in front of me had their cell phones too but the suspense was killing me; I needed to know now.

Thankfully, with head cocked defensively against what the weather guessers had promised was going to be a Laguna breeze, I was able to detect a faint, "Hello," crackling across about two hundred yards.

"So..." I replied, baiting with feigned enthusiasm and sucking my still spurting thumb, "How ya'll doing over there? You seeing something good, or just down on your knees praying for it?"

The reply was short, and after some thought, actually became intriguing enough to try and wrap a little story around it.

It's remembering older lessons, reinforcing some others, but also about learning new ones in the face of an ever shrinking world. Lessons about fish and fishing of course, but also about those peculiar humans who conspire to do it as well.

The area in question was a skinny, wind-driven flat. It was ankle to shin deep for the moment, but fully engaged with life both above and below the surface. Nervous mullet flashed beneath the clear chop while great blue herons and snowy egrets pranced about the peripheral shallows.

To the casual eye it might have appeared featureless, punctuated only by an abandoned crab trap and a few PVC stakes. A sprinkling of newly-sprouted sea grasses was beginning to lend it character, though. Nature was quickly reclaiming the wasteland left by a horde of grass-ravenous redhead ducks. There was, however, one small zone which could likely be found only by total accident or fully on purpose.

A small deviation lay there, a mere few inches deeper, but enough of a change to invite big mid-day trout to lay up, be fat, happy, and unmolested. We had it basically to ourselves for about five weeks, save for the occasional tin boat winter Texan. As General Patton once said upon surveying a Roman field, "It was here; here is where the epic battle took place."

Indeed, we had recently battled several trout exceeding eight pounds from this area, some even larger, and to our single-track minds, every bit as historically significant. It was perhaps only a good seven iron long and a sand wedge wide. Now, horror of horrors, it was being infiltrated by weeklong seekers of the Holy Grail, wearing Houstonian clothing, hell-bent on sticking trout that might reach the coveted thirty-inch mark.

I already suspected nothing was going to oust these squatter enthusiasts until their allotted time ran out, and now, after the short phone call, the hostile occupation was confirmed.

"Oh, that..." the voice replied through the wind shattered phone. "The kneeling deal. That's just something we do. Some of our friends call us the kneelers. Whenever we get a blowup or big swirl, we just kneel down and keep working it until we catch that fish. It forces us to be focused, and yeah, we've already stuck and released two big fish."

Come to find out one of those fish measured thirty and the other thirty-one. Both caught shin deep on topwater... lifetime experiences for the world as we know it. That wasn't all they would catch either, and all the while with me being a sideline spectator due to squatters rights. Here's the rest of the story.

I had fished part of this group before, and last year one of them and a co-conspirator pulled two nine pound trout, back to back, from very near this little sanctum. It is a guide's dilemma. You introduce a coveted pattern to those able to dissect it, and it will be duplicated... with or without you, and whether you are currently using the area or not. It is the nature of the trophy quest beast. They had found this slightly changed pattern both by accident, but again, seriously on purpose.

So there I was, suffering from pre-dawn disinformation, beset with sharing highly protected turf with well-intended, well-versed, and tenacious opponents. Hence the phone call.

In another world I might have started speaking in tongues, but the world I live in today is different. Here's a few highly-condensed observations about what was learned or relearned, several of which could fuel entire articles by themselves.

As far as big fish go, where you find one monster trout this time of year you will likely find others.

Some areas are very small, and big fish will consistently use them for reasons we may never know. It often doesn't take much of a change to attract them, and many of us miss those small details.

Leaving large fish to find large fish probably deserves more careful thought. If they're not biting here, they're probably aren't biting over there either, so staying and grinding for your goal can make sense.

When big fish want to be skinny, they will pull in at every chance and stay there until driven out, even tolerating a bunch of unnatural commotion.

They can be caught with repeated agitation.

One simple lure can be good for the duration. The kneelers used Super Spook Juniors, again showing that bigger fish can be finessed and the "big bait-big fish" theory isn't an absolute.

Regarding the people part of this equation, to their credit, they never moved their boat all day... for several days. No reliance on go-fast boats rooster-tailing to the Promised Land, no burning around or second guessing themselves; they simply chose an area they believed in and fished. Concentrating fully, never bored, they set out to achieve a specific goal. In every tournament I have won, this is exactly what we did alsominimized run time and maximized fishing time.

However, I have never seen anybody stand so still for so long. For them it worked. With several fish between 28 and 31-inches over the period, what normally takes years was accomplished in a week. Mind you, they did this fully on purpose; and I'd like to add that it is nice to see somebody fishing specifically for their dreams. Grinding may not be everyone's goal, but we all have to have goals in order to be successful, otherwise we just stumble through the experience.

Another interesting piece of people watching; despite several lifetime fish, the only things they took were memories and fuzzy cell phone pictures. No fanfare, no internet show and tell, no brokering of information for party favors. Some people need those forms of gratification and some don't. As a matter of fact, there are a lot of great fishermen out there who we will never hear about and curiously, they are often the most accomplished.

Another big lesson for me was learning to share. Sure, I could have gone in there. However, think about why I didn't, and remember the rule that says, "What goes around comes around."

The bottom line is that we can hope things happen, or we can get out there and make things happen. Whatever our goals may be, let's chase them on purpose. We may not have to kneel in the water, but let's remember to graciously kneel to accept the simple blessing of what we are being allowed to do. Many of us forget that, and many of us miss what we came to do by misunderstanding the fish we are after. Those guys are welcome in my boat anytime, but thank the Lord, they are gone.