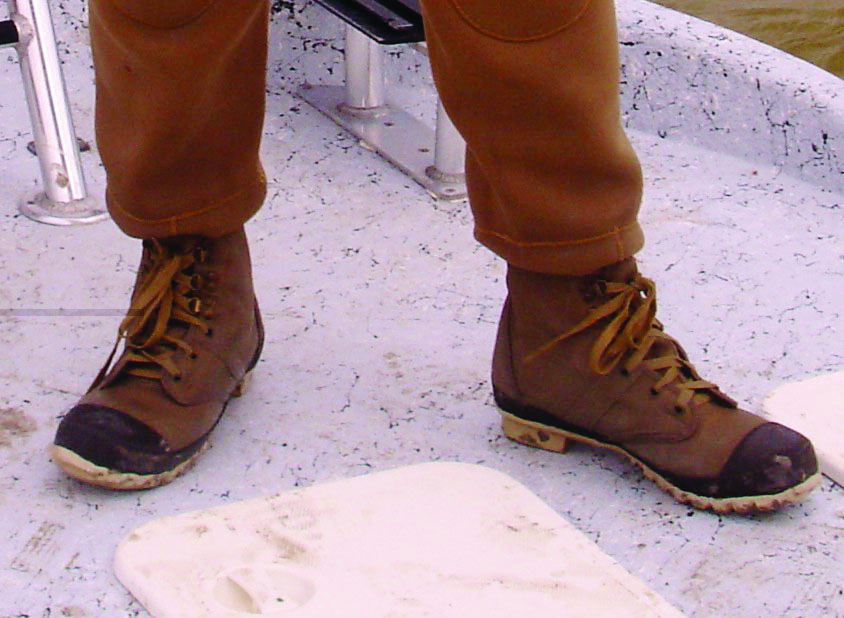 Just last week I had the pleasure of fishing with one I dubbed Sir Gary Gearhead, modern-day Don Quixote of saltwater. Replete in clattering regalia, including seven-foot custom-built titanium lance, Sir Gearhead slid quietly over the gunwale to challenge the giants of the flats, both real and imaginary. Unbeknownst to our chivalrous plugger, his landing net had been ensnared by a cleat, resulting in a headfirst baptizing in the very elements he'd come to conquer. It was to be the first of many gear-inspired guffaws that day.

A question arises about how much stuff we really need out there to help us catch fish, especially while wading. What is practical and what is not? We've talked about some of this before but let's continue.

We certainly need "stuff" to fish with, but let's face it; we've come a long way from the simplicity of a Norman Rockwell painting; where some freckle-faced kid in high-water overalls tugs against unknown monsters of the abyss with only a cane pole and straw hat.

Back to Sir Gary and his gear. Despite a passionate attempt at recordbook infamy, his day was wrought with comic tragedy, mainly due to being over-prepared for the task at hand. He backlashed twice to where he had to re-spool by dabbing his backcast into his trailing net. Became stuck in the mud with his twenty-pound armored stingray boots that ended in a graceful reel-dunking pirouette. Stumbled after dozens of topwaters that had escaped his over-stuffed wading pouch while everything that could sink did. Spent several sessions untangling topwaters from his landing net. And had to take frequent breaks from being the well-dressed warrior he was. Enter the concept of Minimalist.

Despite advertiser spin in those fancy "Arrogant Angler" magazines, we probably just don't need a huge arsenal of stuff on the water. Granted, opinions are the property of the beholder, but here are a few suggestions.

Lures...
Again, as regards the actual lures we need to carry, less is often more. The more time we spend casting and trying to decipher nature's clues, the more fish we will probably catch. I can't tell you how many fish I've caught while somebody is tying yet another indecisive knot. The further I get into all of this, the more I suspect that it's not so much WHAT we are throwing but HOW we are throwing it. A couple of topwaters, a few jigs of various weight, and perhaps a good spoon or two should "get it" in most cases. Please note that the Corky family of fishing lures is exempt from scrutiny here.

A She Dog for when an obnoxious presentation is called for; something like a Skitterwalk or Top Dog for all-around use; a few pieces of preferred plastic to include light, dark, and natural should cover the entire water column and most angling needs quite well. Colors can be important (especially to us), but trying to carry the entire spectrum is asking for information overload and indecision. If you are carrying plugs without toothmarks, unless they're for backup, you may be carrying too much.

Wading belts, pouches, etc...
There are many products on the market today to help us carry "essential" gear. Some are designed for back support, some to carry multiple rods, and some to carry everything we might need on a survival trip down the Amazon. What we do need is one small box of proven lures, a good pair of pliers, and a good stringer if you happen to be in the killing mode. Speaking of stringers, a huge pet peeve of mine is a cheap, flaccid stringer. These can be categorized as impractical and frustrating because you'll waste twenty minutes back at the boat trying to untangle a tangle of fish. A stringer of sufficient gauge will allow your fish to remain in linear order. I would like to challenge our manufacturers into designing more high-performance gear as is done in every other sport. For simplicity I'm using Fishing Tackle Unlimited's single lure boxes and carry pouch. However, for the true minimalist, one of the world's greatest inventions is the Ziplock bag in the shirt pocket.

Other performance enhancing paraphernalia...
Nets are great when and if you need them. However, nets catch more than just fish. Other catches include treble hooks and cleats, not to mention a fish's protective slime. Hand-grabbing your fish is not only macho, it's part of the fun and challenge, plus we can handle fish more delicately if we intend to release them something we are going to do more often down here with the new five trout limit. If you need a net, buy one of high quality. Those rubber meshed ones seem more user friendly. I prefer a Boga Grip. It's simple and I can land a big fish, and then cut it loose without ever touching it.

A quick but related word about those swirly-type terminal connectors I'm seeing more frequently. Yes, they are easy and can save time, but if using them encourages us to constantly change lures, well? Also, I'm seeing many anglers neglecting to re-tie as often as we should while using them, and subsequently fish are lost to frayed line.

There are actually some bulkier items of potential value to consider. We were loaned several Third Legs to try. You know, those little portable leaning posts to use while wading, hunting, etc. Clients who used them said they had fun with them, especially those who have a difficulty negotiating softer bottoms. If anything helps you fish harder, it qualifies as practical and therefore has a place.

Boat gear...
As long as we are discussing essential carry, let's don't forget about the boat. What happened to the old days when saltwater cured whatever ailed us? Now, in some places, wade fishing has nearly become a bio-hazard, especially for those who might be immune system compromised. A good medicine box now seems critical, with bleach, peroxide, or other anti-bacterial rinsing fluids onboard. Scrapes, oyster cuts, and other bodily breeches should be flushed as soon as possible. Don't mess around with salt-exposed wounds, and a strong pair of clean side-cutter plies is highly recommended for human hook removal.

Looking in the ice chest, proper fluids are critical there as well. Let's just try to remember that beer and wade fishing go together like clown shoes and tap dancing.

A list of essential gear is a highly personal one; but to be truly effective in our work, the list is probably best pared to the most fundamental gadgets. Do we really need two floating nets and four tackle boxes? Did Don Quixote really need all that armor for windmills... unless you factor in entertainment value?

Fishing is a wonderful adventure, full of expectations and dreams, but all too often we complicate this simple exercise. The gist of all of this is to carry the minimal best and leave the rest. See Joe Meyer at Fishing Tackle Unlimited if you need assistance. He fishes like we do. See y'all there, and watch out for the windmills.