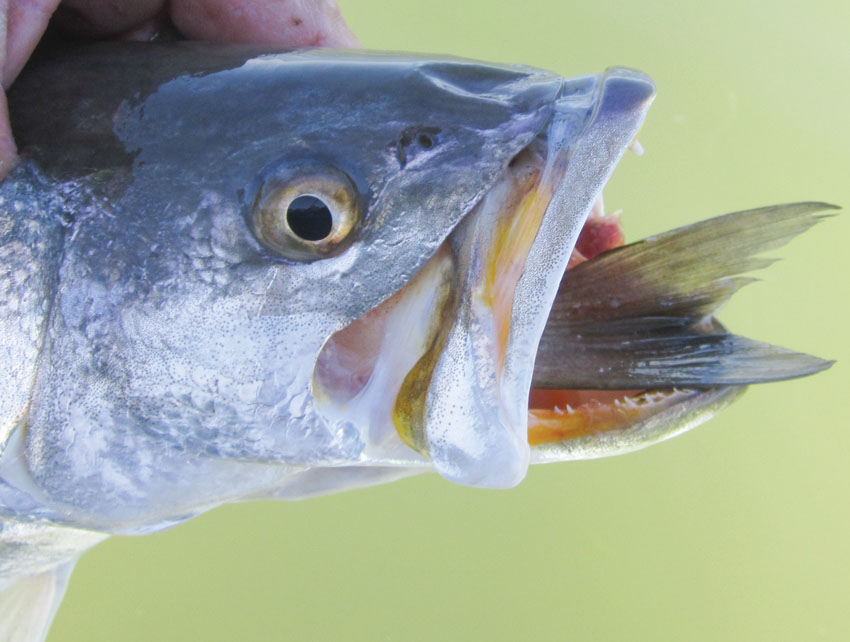 Everybody is a hero when they are feeding aggressively.

The conditions looked absolutely perfect, or at least you would have thought. A coveted southeast wind whispered just enough to tickle your hair and swarms of bite-size mullet flashed just below a trout-green surface with each little peek of the sun. It was one of those days when any outdoorsman wanted to call in sick but we didn't have to. We were already there, standing in cool knee-deep water with eager rods in hand. What could be better?

Unfortunately the fishing part could have been a lot better. We might as well have been in a stuffy cubicle if the "catching" part of this is what it's all about. It didn't matter who you were or who you thought you were, "it" was just not going to happen for the moment. Nature has her own peculiar schedule, and it's not always in sync with our precious allotted time on the water.

This particular scene is not uncommon. Many times the outdoors is just flat-out quiet. Little or no activity to either be seen or heard; and nothing is going to happen for hours or perhaps even the entire day. This time, even though we were looking right at fish so close we could almost poke them with a rod tip (and big fish at that), there was nothing we could do about it except salivate, cuss, and cast again. The little dinks weren't even going to respond much less those lazy giants cruising past slowly under our noses. It happens, and it happens a lot, but then like some sort of magic switch gets flipped, the world changes and you can't take a lure away from them. All of a sudden the birds get up, get loud, and baitfish come to the surface while topwaters start vanishing below it. Nature becomes fully charged, and if we're lucky, we are there to be a part of it.

For me, the most fascinating part of being a guide and on the water most days, under every condition imaginable, is watching how nature works on a daily basis. Each morning's jump out of the harbor propels us into any one of her many fickle personalities. Every sunrise is unique, each point of the compass offers a different wind scenario, and fractal cloud formations paint the sky with various colors of light and intensity. The ultimate and compelling drive, for me personally, is trying to answer the big unknown question for the day: "What does nature have to offer?"

"Where are we going, Captain?" is a common question. Heck I don't know but let's get out there and find out! It's all about working the entire "process" - which is in itself the ultimate challenge - and goes way beyond seeing how many Zip-Locks we can fill at the end of the day.

The "process" I'm referring to means learning the formulas of nature and putting together as many elements as we can for a better chance at success. Many hopefuls just go to their favorite spot without much of a defined purpose, and if they bite - OK, and if they don't - Oh well, at least it was fun trying.

Anybody can have a good day, but few anglers experience enough of them to begin to understand the "why" of it all to the level of making it happen consistently. Let's face it; being able to indentify and repeat patterns is what makes a good angler. It's not only about finding fish, but finding fish when and where they will eat is what matters! There are, and always will be many things we will never know, so all we can do is take our best shot at what we think we have already figured out.

What I think I know is that fish are usually in one of three basic modes - aggressive, neutral, or negative.

When they are aggressive everybody is a hero. When they are neutral a good angler can still catch them but, nobody is catching anything when they truly go negative. We don't know what causes these different attitudes, but we can certainly see them happen, especially at the extremes.

It's interesting that all of nature seems to be part of a giant orchestra, and just like Grandpa said, "If the cows are laying down so are the fish."

Proof of Grandpa's wisdom is seen daily here in Port Mansfield. If the deer are moving out of the tree line at sunrise, sparring and prancing around, chances are good that the fish are active out on the flats as well. If they are hunkered down in the brush chewing their cud, the fish are probably hunkered down too. So what triggers these aggressive spells or prolonged sulking periods? And what interests me most are those electrified times when the magic switch gets flipped and the entire orchestra rises in a giant crescendo. How can we know?

We know the barometer plays a role, as when we see it abruptly rise or fall we generally see increased activity, but that really doesn't make any sense when you consider that a fish can move up or down a mere six inches in the water column and overcome the wildest of atmospheric swings. We know the moon plays a role but, I have yet to meet the man who can explain why and I doubt seriously whether you have. Why do animals, fish in particular but other critters as well, become more active on moonrises, sets and transits? Why does life in general ramp up more aggressively during both full and new moon periods? All you have to do is ask the EMS paramedics or law enforcement folks, that word "lunatic" came from somewhere. I wonder if it might have been a fisherman trying to figure all of this out.

How can we discover when to be where? Those times when the coyotes are yipping, the ospreys and pelicans are diving, and gamefish are energized and frothing up the water? All we can do is pull together as many "multipliers" as possible and hope for the best - such as being in front of a backwater drain right as the tide starts out and the moon starts up. It's about working our highest potential guess at the highest potential time. There are many other elements we can put together, but it's the very mindset of trying to find answers that will turn a trip into a true adventure.

We have it fixed in our mind that nature is a woman, and a strange one I might add, but if we ever totally understand her we might as well go bowling, yet that perfect 300 probably ain't happening very often either. In fishing, some days are gold and some days are coal, but there's far more to this whole deal than whetting a fillet knife at the end of the day. It's about "the process" - learning to learn, and success is far and away better measured in moments than in meat.

I guess where I was trying to go with all this, as it might pertain to human behavior and fishing, might be best explained in a quote from Ayn Rand -- "A creative man is motivated by the desire to achieve, not by the desire to beat others." Here's to understanding the process!