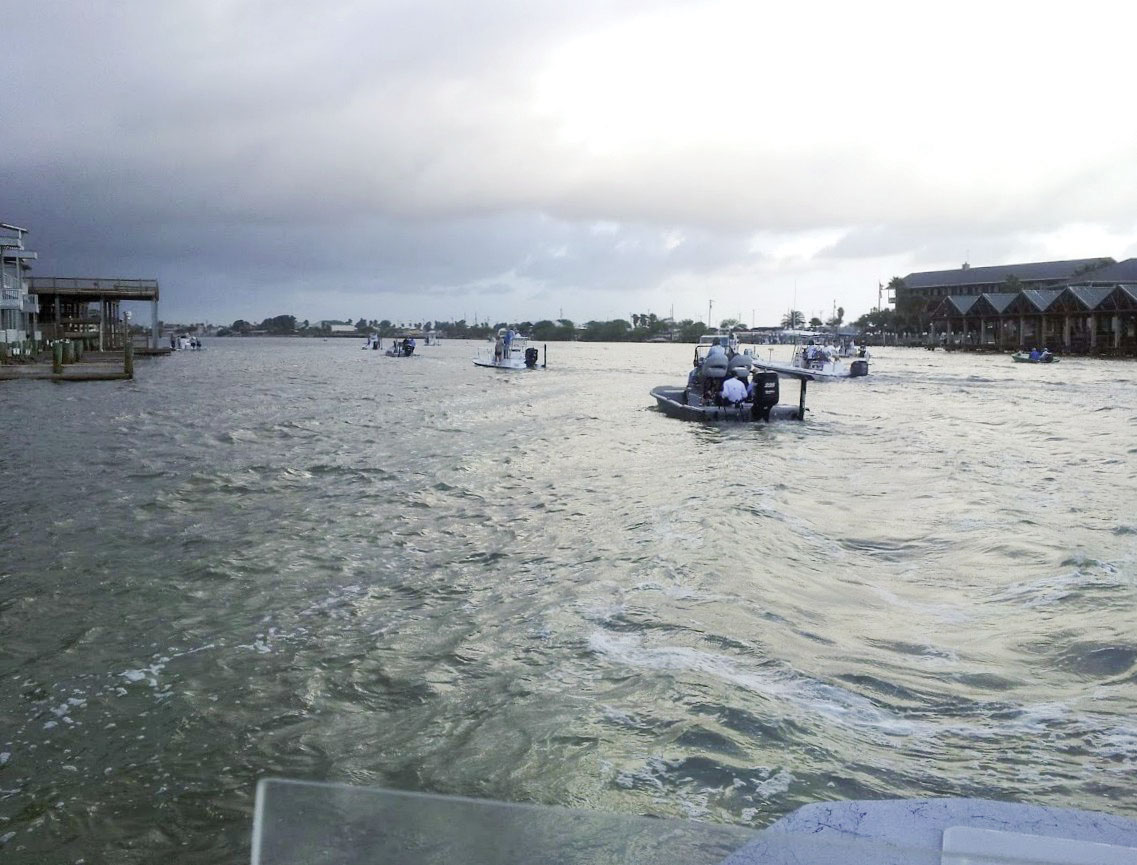 We might as well dig in!
It was on a Thursday, well before sunup, and theoretically, before a crowded weekend. I managed to thankfully pry up the last four bags of ice from the bottom of the freezer (actually more like blocks), but only after dodging several shiny high-lift golf carts on the way to the store. That sputtering propane procession had also stampeded a small herd of our local "stimulus corn" deer, but I managed to avoid them as well. Inside, the cash register was stacked with the normal bait bucket line, but also jacked up with some last minute fishing license buyers. Excuse me, but did you know you were going fishing today?

Hurrying on to the boat slip I was soon blinded by high-beams of a rig backed down the ramp, honked at by a truckload of Columbia shirts still lit from the night before, then temporarily deafened from George Strait on blown speakers to the left dueling with a door-thumping rap tune to the right. Hooray it's summerlet's go fishing!

Yessir, things have obviously escalated a bit on the bay, and King Ranches pulling 10-year boat notes are throwing a lot of shade on most public launch parking lots. That was bound to eventually happen but it's not so much the actual crowd factor that raises a brow, but more so a seemingly different crowd in general.

I guess when I first started fishing I was bitten by a different bug than seemingly prevails today. The main symptoms for me were visions of challenging nature on a personal level, beyond our understanding, trying to match wits with elusive line-stripping creatures beyond our control. It was a fundamental and solitary craft, often sufficiently humbling to leave the biggest egos in check. However, whether catching or not, every experience was magical and lasted long after rods and reels were put up. In many respects fishing was something much larger than the act itself. Today though, it seems as though that simple act has transformed into something quite apart from the innocence of a Norman Rockwell painting.

Being that technology has made us so much more efficient, to the point that the once elusive has become relatively easy, it's also easy to see how more people would naturally try. As crowds increase though, and because humans are all about maximum result for minimum effort, much of that yesteryear challenge now seems more about how to get in and get 'er done!

For so many nowadays, "gettin 'er done" simply means getting a limit as fast as they can. There is no blame here from me; sadly though, we have seen a revered sport fish morph into something of a commodity and fishing results appear to be measured more often now in meat than magic.

With more people sharing a resource competition naturally becomes fierce, and often more against other humans than fish. That can be frustrating for those with other visions, so we basically have two choices to make. We can either go home with our Rockwell idealism decaying to disillusion, or we can try to play better in a crowded sandbox. We might as well dig in because it's just not going to get any better. Everybody grab a shovel!

No, let's don't shoot the potlicker, and please try to forgive them for most know not what they do. However, there will always be those other people, the same ones who will cut into a ten-item express checkout lane with twenty things and rudely occupy a handicapped spot. It's just that now many more of those people have boats, so we've little choice but to manage our expectations more carefully. If we go out expecting the worst, everything always seems better.

We should simply expect to be cutoff and run over during the summer months. Heck, the only reason I even bother to look up anymore is to see if I am in immediate danger or whether there are bikinis in the boat.

We can plan on having boats drifting into our wades and wading into our drifts. Rules of engagement have changed and we can expect there to be no rules, especially concerning crossing situations and rights of way. If somebody encroaches, and they will, we just need to learn to get over it, laugh and let it go. No, we don't need to be a doormat, just the bigger person, and remember that on-the-water retaliation only perpetuates the cycle and fixes nothing. However, even though most fishermen are born polite, some get over it, so if a little discussion becomes unavoidable, all parties would be better served to save it for the dock.

Besides greater tolerance there are a few strategic things we can do to still have a great experience on the water. Believe it or not, things like launching a bit later can actually help. When we get "there" first, it often doesn't matter because we can't hold it anyway. It's maddening to be first on a shoreline only to have to bob up and down in earsplitting boat wash for an hour as the rest of the weekend fleet hurries by. Anytime I cannot hear my topwater over a passing outboard, water rage is a looming emotion, and I usually don't catch anything. On big tournament days, for another example, I've actually let everybody go and get settled in, then quietly slip in later where the traffic might have pushed fish. It has worked surprising well!

Also, seeing that most of the get-'er-done types tend to be early quitters, the areas they broke their necks to get to first can be found wide open long about midday. It's like playing chess out there we can still win if we have a better strategy and stick to it.

There is much talk circulating concerning the growing battlefield, but to summarize this summer, and probably the rest to come, there are simply a few realities we are going to have to suck up if we want to keep enjoying what we enjoy doing. First, it is not going to get less crowded, not for a while anyway, whether at the stores, ramps, parking lots, or on the water. And, like it or not, it's a shared resource and none of us are entitled any more than the next guy. "My" spot is unfortunately also a public one. We can be miserable about it or we can just deal with it. A bigger reality is about what the sport will look like in ten years, and that is going to fully rest on our individual actions. We can either be part of the problem or be the good example to follow. Trust me, not everybody out there wants to be a Richard, and with good examples, some might eventually change their name.

As for me, making fishing look easy is hard work, but if I try hard enough, I can probably still find a quiet pond in an expanding urban world. You can too but; hey, I would still suggest getting that ice early! See you there, but hopefully at a distance.

BTW, none of this is new. A guy named Thomas Bastard (curious name for the quote) was also obviously frustrated when he said, "But now the sport is marred, and why you ask? Fishes decrease, and fishers multiply." Mr. Bastard said that way back in 1598, so perhaps he DID shoot the potlickeryou know he wanted to!