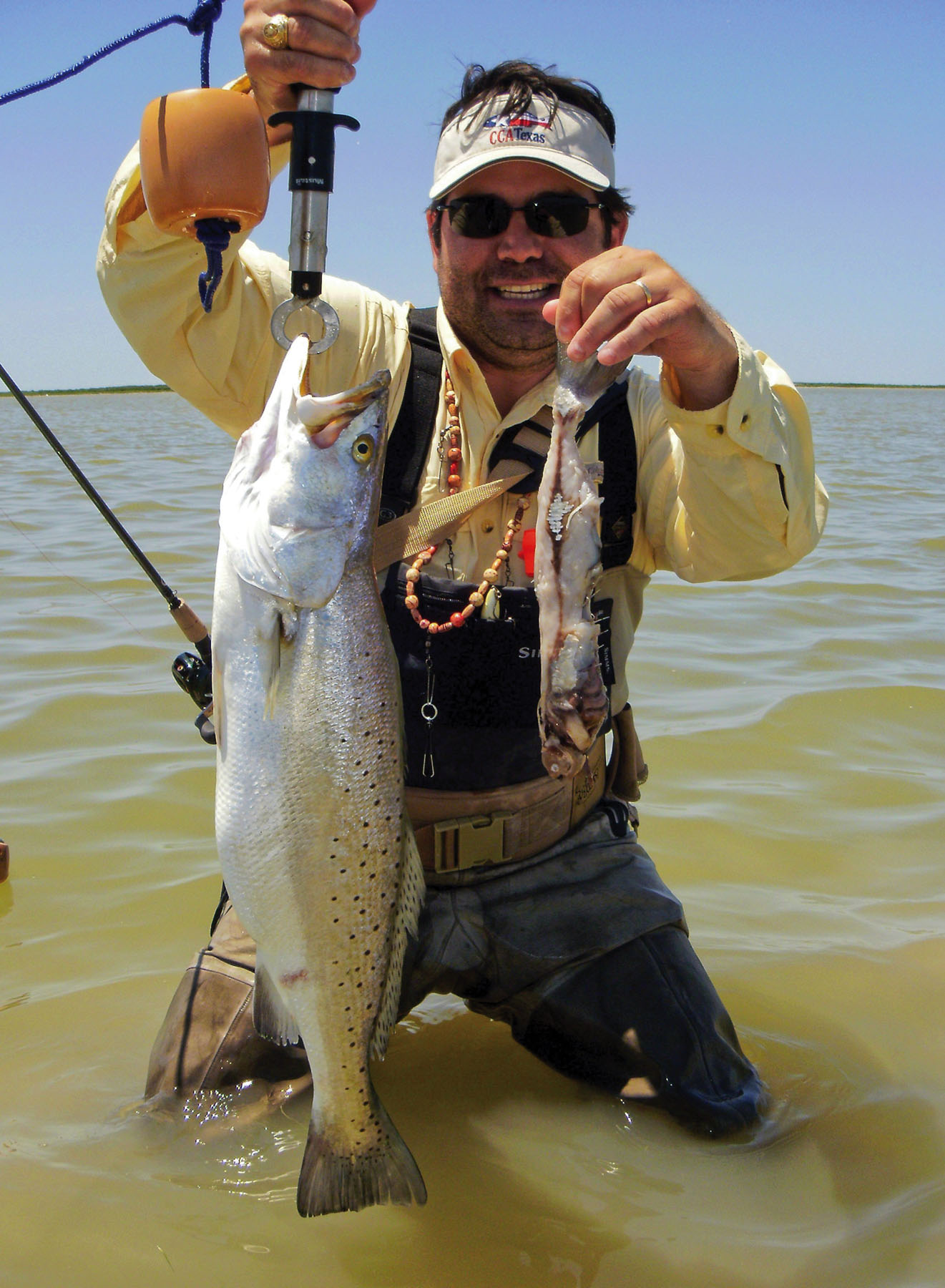 Dr. Manny Sanchez proved a well-fed trout will take another tidbit.
As we are reminded often, just as soon as things change... things change again. Thankfully, my brown tide story of last month is now mostly old news. As worried as we were about having a tough, no visibility summer, a powerful tide of Gulf water took care of it almost overnight. However, dealing with change is a large part of what fishing is all about in the first place, so now that we are fortunate enough to have a clean spring to work with, what are we going to do about it now? Catch more great fish I hope, and spring and early summer are definitely times when changing lures can make a difference, especially size.

Personally, I have never much subscribed to the theory of having to have the "exact right" lure to catch fish, especially as regards color, except for some very occasional situations. There are certainly exceptions to every rule, but day in and day out, we have so many man-hours walking behind lures with clients that we see great fish caught on most everything. This guy is throwing black, the guy on the end is using pearl, and the one with the funny hat has a color you'd never buy unless you like fruit in your cereal. Repeatedly, the analogy I like to use is "It ain't the arrow; it's the Indian." What does seem to matter though is size, especially during spring and early summer. We catch a lot of big fish throughout the year on large plugs in shallow water, but during the wildflower months, mullet is not always the main forage even for the bigger trout we all covet.

Instead of the throwing the standard full-meal-deal lures, we have been catching a lot of impressive fish lately on Little Debbie Snack Cake sizes. There are all sorts of small stuff on the menu right now; glass minnows (bay anchovies), scaled sardines, pinfish, croaker, shrimp, and small ballyhoo (needlefish) besides many other treats. The cleaning tables reconfirm that the fish we are after seem to eat it all. Downsizing makes sense, and Jody Norris pictured here has been around long enough to know that. The way Jody caught this one was cool and sure to be repeated often throughout the month of June. Anybody can catch dinks, but if we really want a toad, sometimes we just have to do it on purpose.

We were working a shallow area where we knew big fish were hanging. We knew it because we had already been catching them and the conditions were right. By "right", the tide had dropped and pulled some off-colored water and a tremendous amount of bait into the area. Most of it was horse mullet, but again, that's not always the main target. Bigger fish love a lot of cover and will often "cloak" with rafts of mullet even though they are not eating them. Jody chose the black Super Spook Jr. and started pestering them by throwing into every little piece of opportunity he could see. It was an expansive grass flat about 12 inches deep laced with silty potholes and with a slightly deeper swale running the length of it just covering your knees. Perfect. Another reason to downsize lures in areas like this is that too strong a presentation can seem threatening rather than enticing.

After dancing that little treat over several "micro areas" that looked like they might hold a big fish, Jody finally gets a big flush. "She came up for me once, so I just eased off and gave her about a five minute break, then I went after her again," he said. He knew she was there, but unlike many of us in this instant breakfast world, he had enough patience to approach her again in determined stalk mode. Several teasing casts later, the fish finally lost her cool and protested mightily as the hooks were driven home. It wasn't a Boone & Crockett fish; but hey, eight and a half will work any day, especially when you catch it on purpose. That is real fishing, and as stated before, there's something very special about catching a trout longer than the water is deep.

For whatever reason, that little black lure Jody was using seems to catch fish when others fail. Perhaps it's just a good silhouette they are used to seeing. Think about how many times during low-light periods when all a fish can see is a dark silhouette, and this applies to dirty water as well. That's just my theory, but whatever, black topwaters seem to get hit hard often.

Two other recent examples of "little bait - big fish" came with the Sanchez bunch. If you know Spanish, the "Sancho" bunch may be a bit more descriptive as they are quite colorful, but they pulled it off quite well with little teasing presentations rather than grandiose pounding. Dr. Manny stayed with a Norton Bull Minnow and kept pulling it through horse mullet in shin deep water. Luckily, an eight and a half snagged it as well. I say luckily because he saved himself from even more descriptive terms. He had earlier pointed his bat at the centerfield fence and casually mentioned, "If there is a big fish in here I'll catch it." Well he did, and about three casts later caught another almost as big.

Manny's catches are further evidence that smaller treats can be hard to turn down, even for a big fish that has already fed. As the picture shows, there was a sizeable mullet sticking out of the larger fish's mouth, and this fish would have gone closer to nine pounds had it not been extracted. However, it was clear the animal didn't really need to eat again, just couldn't resist a little Snickers bar when presented well in the right place and time. Uncle Ed Sanchez followed suite with another impressive fish; same type of deal, tickling them with a feather instead of pounding with a hammer. In the pictures you can see how a large and loud bait may have been out of place.

This spring, all the way through about the end of June, there are going to be many exceptional fish laying up in similar nasty shallows in every bay system in Texas. I think a lot of us miss them, either because we don't fish shallow enough or don't approach the areas correctly or with enough confidence. Junior-sized topwaters and little paddletails work great, but there are many other options on the shelves to help us become the better Indian. Excalibur's Spittin' Image, MirrOlure's relatively new MirrOdine and MirrOminnow, and Gamakatsu's Dawg 100 are a few examples. Another bait responsible for some big shallow fish lately has been the now hard (impossible) to get midget Corky. Perhaps one day they will become available again.

The old clich that less can be more is holding true in other ways too. With this new five trout limit, five fish down here will now often weigh more than the average ten fish stringer along much of the coast. Think about that, and in the meantime, think about getting in there this June with a little bait and a big shot of confidence.