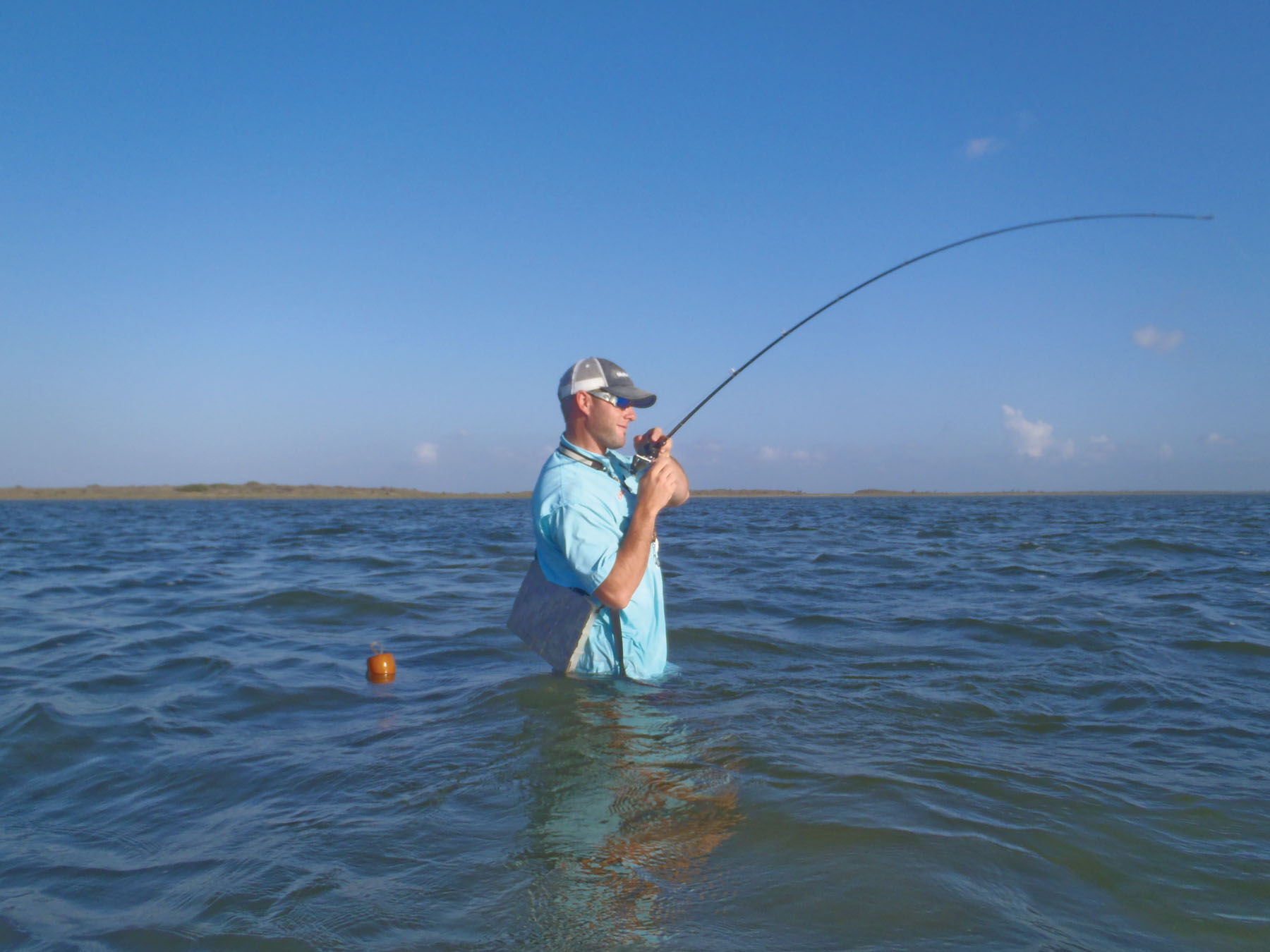 It's that time again when fishing tournaments rule most weekends. Various formats will pepper the inshore calendar from semi-pro NASCAR-shirted deals to charity events and corporate team building. I don't compete often anymore but recently fished the 24th Annual J.P Griffon Memorial here in Port Mansfield. Competitive lessons from the past were remembered and related thoughts reinforced. Many will be registering for competitions soon, so I figured I might share some of our latest experience. Here's hoping a few lessons learned the hard way might help others.

The "Griffon" is organized in memory J.P. Griffon who lost his life on the road traveling to fish Mansfield. It's an invitational charity event with no purse, but clearly one of the more prestigious sausage pulling contests down here. Heavy hitting teams converge each year looking to hang a coveted plaque, protect their honor, or perhaps gain some. It's almost comical what fishermen will do for bragging rights, but that's another story.

Our team, "Doc & Sons", sports two former TroutMaster foes besides other talent. Like many in the big trout brotherhood, we met during the days when Mickey Eastman was at the helm of Gulf Coast TroutMasters. I just needed to get them in the right zip code. As always, a good plan is everything. We thought we had one but conditions had to be perfect. A miracle must have happened because the weather guy actually gave us the favorable winds as predicted. Good conditions give everybody strong opportunity though, so we knew the heat was on.

Despite early-bird intentions, I watched in horror (still nappy headed and spilling coffee on my underwear) as several boats were already leaving at 0400. We fumbled with a blinky spotlight, working better as a blinder in the pre-dawn humidity, and managed to squint into our area unchallenged. The thirty-minute wait for official time was agonizing, quietly listening to bait crashing in the dark above distant roars of approaching boats.

Cody Stripling, our youngest talent, chunked a topwater at T-plus two seconds. An aggressive three-pounder immediately rocketed out of the water ejecting the rest of us from the boat. Thankfully, increasing light betrayed a bait line fifty feet wide seemingly to the horizon, tightly hugging a shoreline contour. How awesome when the first part of your plan actually works? Time for the second part of any tournament equation - figuring out the bite for the best fish available.

The heavier sticks, Doc "Guitar" Saenz, Mark "Javelina Head" Trevino, and Cody, lined up shallow to deep and headed north, probing every feature. Ray, our least experienced but never to be underestimated (though still yanking on monofilament), eased south with me toward a little point working alive with bait. We literally started smoking trout every cast on topwaters, but basically all clones pushing two to three pounds. We knew bigger fish were there though, seeing them following the smaller ones hooked. Time to adjust!

The other guys, nearly out of sight, had already figured it out. Their better fish, like ours, were shallower and away from all the bait ruckus along a shin deep sand ridge pocked with grass. Location figured, it was time to figure presentation. Cody called up better fish on a junior-sized plug, so all switched and started dialing in. Doc, our topwater strength, finally strummed into the right rhythm, a slower cadence to Eric Clapton's She's Waiting. It worked.

Mark, seeing us good on trout, led the charge for equally important redfish poundage. Fishing as a team we managed a tad over fifty pounds, giving us a solid eight pound lead, with our trout averaging five pounds. Then it was time to put a plan together for day two.

The weatherman said fair conditions early so we tried to repeat the pattern. Wrong! The weather geeks might need to clean their crystal ball as once again the prediction fell way short of reality. The closer we got the heavier the whitecaps - from the wrong direction. Our gimmie was gone. Time to punt.

A good defense can sometimes be a good offense. Knowing another "hero" was unlikely, we re-scripted the plan hoping that an average box boosted by an eight pound lead would be enough. We opted for another spot with decent potential on the predicted strong NE wind that was to come later in the day. Wrong again. That big wind kick never happened and the bite we counted on didn't either. Like we learned in TroutMasters though, you just have to fish the hand you dealt yourself, or rather, fish your way out of your mistakes.

With no bite it was scramble time! Javelina Head starts rooting on hands and knees on the bank, sight-casting mid-slot reds. Not tournament class fish but a great save. Everybody split efforts using their best game; topwater guys going for upgrades, others going neck deep ensuring a full string even if small, another going for flounder - every ounce critical. Can you imagine the goat ears we would have worn blowing an eight pound lead? We limped in still hoping and were fortunate to win. Sometimes you win because others fumble, but regardless; here's some of what I either learned or relearned.

Pick your team: Depends on the format of course, but when you need aggregate weight from multiple species, sometimes your bro-in-law or nice neighbor needs to stay home. Mix guys who specialize or strong hybrids that can do it all. If you are going to sign up, might as well fish it to win. Being an "also ran" is boring. Just ask me.

Agree on goals: Some of the best, simplest advice I ever got was from long time Corpus guide Joe Mendez. "You're doing it all wrong," he said. "Catch fish firstthen upgrade." Doing anything else, unless very fortunate, sets you up for either a hero or zero outcome. That's what I used to do before getting smarter. Thanks Joe.

Making a plan: Many factors here and it's not always about being on the biggest fish. You still have to have opportunity to catch them. Logistics are crucial. "Where can I be, at the right time, to maximize efforts without being covered up by others?" Much depends on your boat, weather, tides, launching time, rules, etc. Put it all together and stay with it.

Brains to change: Like these guys did, work to figure out the strongest bite and adapt to whatever you are given. In our case, it would have been tempting to casually enjoy that every-cast three-pounder topwater bite, missing what was needed. Adapting to adversity and doing what it takes is also huge, and often means going out of your element. Trout guys begging for flounder or crawling on hands and knees for reds are examples.

Confidence: Like Jay Watkins always says, "Ya gotta know they are there and know you can catch 'em."

Adjusting Day Two plan: Depending on day one, where are you on the board and what do you need to do; offense or defense? Anybody can be a one-hit wonder but doing it two days in a row culls many from the herd. As Doc said, "We just needed to hold." Many leads have been blown trying to "hero" and not even getting all your fish.

>Always maximize casting time. Use that toilet paper before you launch by the way, where did Ray go?

>You have to land what you hook, so avoid break-offs, straightened hooks, and other lost opportunities. Right Cody?

>Taking care of your catch is also big. Just throwing fish on top of ice will cost you critical ounces through dehydration. Keeping them submerged in an icy slush is much better.

>Choosing which fish to weigh-in is also critical. Handheld scales can vary. Test for accuracy using a gallon jug of water - should weigh 8.4 pounds. A half gallon should weigh 4.2 pounds.

>Remember that Karma follows you. For every boat or wader you give wide berth, you will earn another blessing. I promise.

>Win, lose, or draw; tournaments can teach us much if we want them too. I probably learn more when I lose, but this was fun. The Griffon is great people, great cause, high challenge. Whatever your competitive intentions; good luck and enjoy.