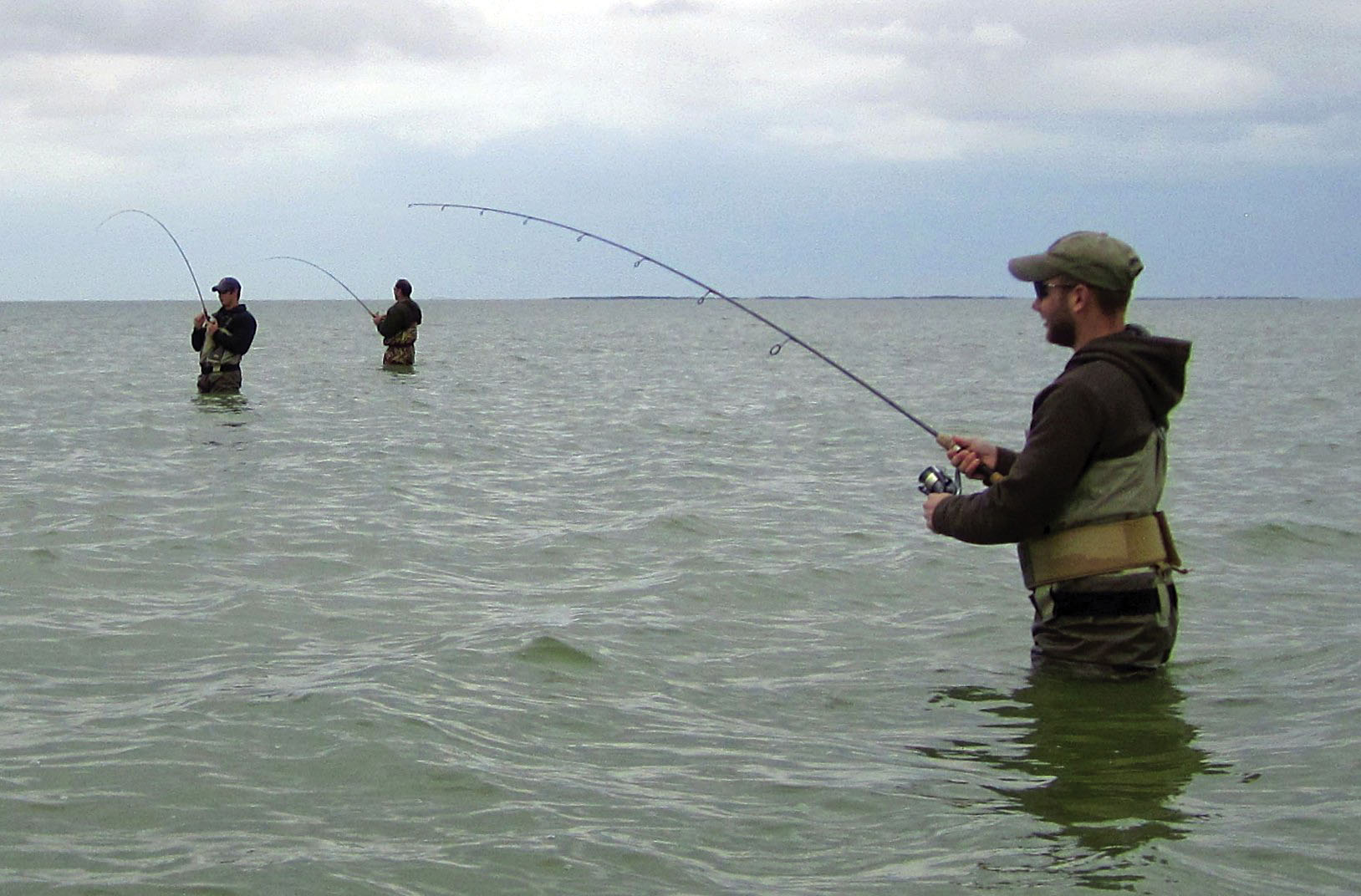 I’d much rather be known for consistently catching solid fish in multiple conditions.
While on a slow plane yesterday, scouting for high-potential trout water, I couldn't help but notice a twinkle of morning sun reflecting from across the center console. The pearlescent band marking twenty-eight inches on one of my rods was taunting me like a schoolyard bully. "Challenge accepted," I muttered, encouraged to work a little harder to find the just the right place for my guys.

And then it hit me. I began to ponder what the term "trophy" actually means in the first place. Does it really start at twenty-eight inches? Let's try to look a little closer, as many hopeful pluggers will easily push that mythical bar a couple of inches higher this winter. We can count on Joe Meyer, owner of Fishing Tackle Unlimited, as being one of those yardstick fans.

While wading together one fine day, between long casts and short discussions about those cool Green Rods he twists up for us, Joe casually mentioned something along these same lines; "I'm thinking about putting a thirty-inch mark on our rods... whattaya think?"

"Awesome,"I replied, and imagined how exciting it would be for wade fishermen to hold a trout against their rod and actually see it kiss that coveted mark. That is the ultimate goal, right? The absolute benchmark of trout success; the undisputed badge that confirms we are indeed the fishermen we think we are. Hey, if you haven't caught a thirty yet you're still a geek, right? If the truth be known, how realistic is our expectation that we can actually go out there and land a verifiable thirty-inch trout, especially on a lure?

A twenty-eight inch trout is certainly do-able, but a "sho-nuff" thirty-incher eclipses that mark exponentially. In fact, some studies have shown that trout older than four years old comprise less than three percent of the entire population. How old then is a thirty, or even a twenty-eight for that matter... six, seven, maybe eight years?

I ask myself how many thirties I have truly caught, plus how many we have seen from our clients after a huge number of determined man-hours in one of the better places on the planet. Sadly, I also began to think about that classic guy who goes home saying, "Yeah we had an awesome time and caught lots of great fish, but we didn't catch a thirty." That same misaligned angler might also say, "Aw man, what a bummer, it's only twenty-nine and a half." Should that fisherman really be disappointed? Who ever set that mark in the first place? I've just have to laugh sometimes. Do we really have a clue what kind of odds we're up against? Do you still buy Texas Lotto tickets?

The bottom line, despite all the embellishment and hype, is that many an accomplished hopeful has plugged hard for decades and has never come even close. Should we really weigh our ego against that stuffed thirty on the wall? Of course that will always be cool and we're certainly always going to try but, me personally, I'd much rather be known for consistently catching solid fish in multiple conditions rather than a guy that made one lucky cast.

However, even though a real thirty is extremely rare, there are indeed some basic and elementary steps we can take toward earning that merit badge. Getting good at consistently finding mature fish is a definite pre-requisite, and after that we're back to running on luck. Curiously, though, luck seems to strangely coincide with time spent on the water, and considering reality, it must also be some of God's goodwill whether or not we are ever allowed to boast of our hero status. Let's try to get as basically close as we can anyway.

First on the list is to try hardest where epic fish are known to live. Like prime commercial real estate, it's location, location, and location. Sure, a thirty can come from any saltwater puddle, but specific regions do seem to offer better chances. Obvious areas include East Matagorda, the Upper Laguna Madre, Baffin Bay, and the Lower Laguna. It's hard to catch what is barely there, so let's first go where they are.

Second in the equation is to try hardest when chances are highest. Yes, a beast can come at anytime, but our efforts are best spent when bigger fish make themselves more easily available to us. We can't get on them very well when they are suspended somewhere in twelve feet of water, but a few factors encourage them to move within successful wading depth. Basic examples would be during colder water periods when warming shorelines become attractive, and also during peak spawns when they are again using the shallows. Your "wish" calendar should have lots of dates circled between December and May. The record books and the logs Tricia and I keep seem to back this up. (By the way, we are not counting pitching live fin-fish into deep water during summer. Nothing wrong with that per se, but each technique brings its own set of odds and to each his own.)

Next up is to target high-percentage windows during those higher-percentage seasons. Back to the record books, (whether for speckled trout, bass, or something with horns), success seems to occur most often during periods of big moons. Most suggest three or so days either side of a full or new moon. Without another story, my personal experience says I like the new moons betterunless weather factors intervene to offer better opportunity. During most cold water adventures, weather seems to play a much bigger role than the man in the moon. Other obvious opportune times include mid-week days with little prop wash. Good current flow also helps, whether it be wind or tide generated.

"Where" is what most folks deem the most critical factor and no doubt the origin of the term "potlicker." But in reality, the "where" changes from day to day with the weather and water conditions. Fish move, so it's usually the angler who reads the water well who does best. However, targeting areas with heavy cover never hurts (little bitty areas I call trash holes), and "shallowing" slopes near deeper water seem to be consistent.

"Shallow" to me smacks of high-percentage, simply because it places more finite limits on where the fish can lurk and feed. We don't have to worry about exact depth somewhere in a water column, furthermore, big fish often use shallower water than we might ever imagine. Here in the Lower Laguna we often find them running skinnier than any boat can.

The final factor is what to use to fool a bigger fish. To that I say there is no magical lure, and that it's more about being on them plus speed and depth of presentation. However, a few classes of baits do seem to have advantages, mainly because they offer great versatility and cast far. MirrOlures, topwaters, and of course Corkys, fit the bill. But interestingly enough, Capt. Tricia will consistently catch the same fish we do with a tail. Again, it's mostly location, timing, speed, depth, and luck.

We can tag anything we want as a trophy, but in my experience, it's all relative and there are many days when a twenty-inch trout qualifies quite well. It's more about the experience, but if we can actually beat these incredible odds, heck yeah plaster that wall! However, let's don't get blinded by some thin mark on a rod. There are many things that make for a great experience, so let's get bit, have fun, and just take our best shot at greatness. Shooting for the stars is awesome but, I promise I'll never sneeze at a twenty-eight. But go ahead Joe, put that thirty mark on there, it'll give the folks inspiration to achieve their dream.