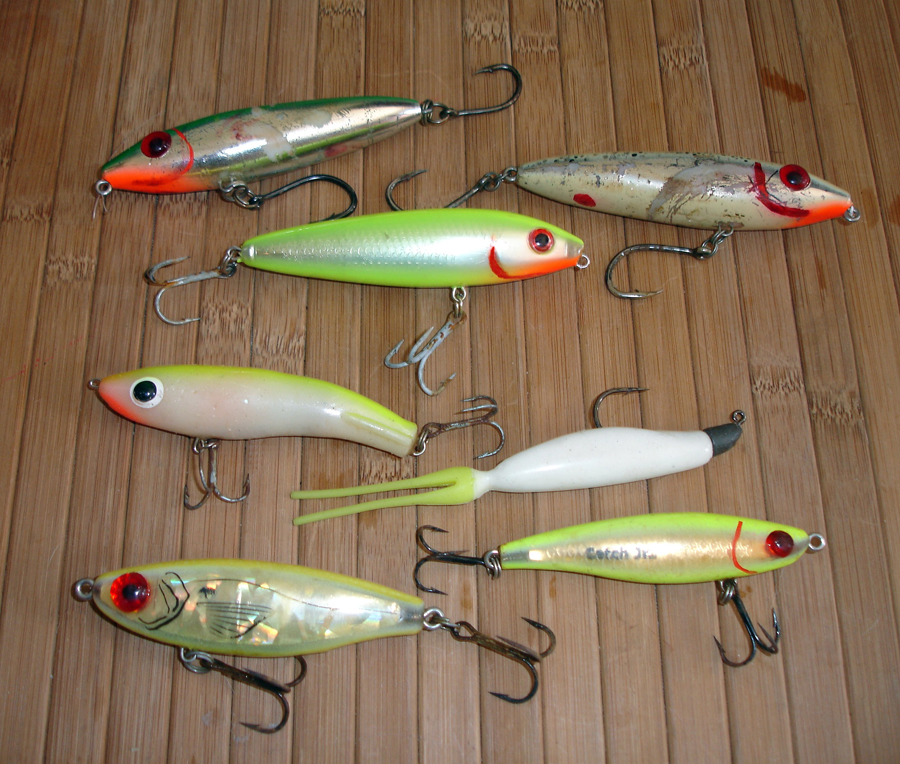 Using lures that make sense. “Mullet-like” is a good thing.

I don't know about the rest of you lure junkies, but for me winter is where it's at for maximum inshore fishing value. When it's time to put on waders, it's time to get serious trout serious that is, and it all starts in November.

Based on last year's showing of magnum-sized fish, I can't wait for the northers to hit and wearing funny rubber pants. I even have a beat-up Corky hanging from my laptop screen for a little iconic inspiration. Just the sight of it is making me twitch with a life force I haven't felt since the water warmed above 65-degrees last spring.

When we talk about getting serious, there is a distinct difference between landing a big trout by stumble-bum luck and going forth to catch these beasts on purpose; it's more than just fishin'. Those out for mere fun need not apply. This is a dedicated effort reserved for those with realistic expectations and an unrealistic drive to grind it out for that one big bite. You've really got to want it, especially when harsh conditions come into play. However, down here, the prospects for hunting up a beast are indeed realistic.

TPW studies have shown that some eighty percent of all Texas trout above thirty-inches live within the Upper & Lower Laguna. Even so, many a good fisherman has fished for years yet never put a hand around twenty-eight inches of trout, a common benchmark where the word 'trophy' begins; never mind those over the coveted thirty-inch mark. Whether you have caught one yet matters little, you want to, and your shrine of a lure collection confirms it.

I've had the fortune of landing a fair share of bragging-sized trout. It's probably not because I'm better than you; I just that I get to try more often. And for that matter, so do a lot of others. Everybody has their own peculiar philosophy about what works, which is cool - but for this purpose, I'd better just stick to what has worked for me.

Like any sort of lure fishing, it's all about patterns, presentations, and timing; a little luck doesn't hurt either. With big trout we just need to tighten it all up a bit. While we can't argue traditional patterns and places, if we lock ourselves into only what we already know, we will hobble through life wrapped up in a worn out security blanket. That reeks of mediocrity and I doubt many of us fish hard for that reason. I'm going to work a lot of the same areas this year, but take more risks. The risks will be spending precious time catching absolutely nothing, but the rewards of discovery can run long.

Places? Most of our bigger fish last year came from areas having a few things in common. Structured shorelines on the west bank near deeper contours were big. Depressions in shallow back-bay areas were too, especially those just a few hundred yards from deep water. Interestingly enough, some of the bigger fish came from hard-packed sand. Surprise- there goes that wintertime mud-stomping myth!

The most common characteristic among these places was knee to waist-deep water with distinctive bottom structure that could be found near deep escape routes. Nothing new here, it's all pretty simple so far, huh?

There is a lot of water out there and I'm intent on exploring more of it this year. I may not find what I'm after in every place I search but that's OK because eliminating water is as good a strategy as any. We have excellent tools now. Google Earth and Local.Live.com have satellite photos that will blow your mind and show us little nuances known only to birds in a previous era. We need to look and think and then go put our feet on them.

Water Conditions: Every location that produced large trout consistently last year had a similar signature; they were in the murky stuff with clear water nearby and with good concentrations of the right kind of bait. Six to eight inch mullet seemed about right, but they needed to be acting right as well. You can tell when large predators are in there with them by various signs, but reading bait is a whole 'nother science of its own. When we see what looks good, STOP, no matter where it might be. One thing that looks good is spooky bait which appears to be on the defensive. Sometimes you have to look closely because they are not on the surface. The art of discovery again, remember?

Timing: It's hard to deny what was seen last year, and the years before count too. We caught big fish in all sorts of conditions; from pre-front southerly blows to bluebird post-norther calm. We even caught some during the absolute height of a norther.

However, there was often more. That voodoo moon phase stuff seems more pronounced during winter, and even the old originators of such lunacy have written as much. Many times we would grind where we felt big fish were holding, only to draw blanks or subtle taps until 'something' happened. That 'something' was often the moon rising or setting, especially during big moons. Last year's February article, "B-Lister's Odyssey", outlined a prime example, although the protagonists were examples of things we won't discuss here.

Weather conditions always hold the trump card however and will override most everything else. Just because they may not be eating doesn't mean they can't be caught. They are somewhere, so we need to be where it makes the most sense for the hour and get a lure in there with them. That's the grinding part and good things always come to those willing to work.

Using lures that make sense: We can experiment all we want with "lures not sold in stores," but they need to have a few things in common as well. Fish will eat most anything when it's on, but 'mullet-like' is a good thing for winter. Corkies, and where grassless conditions allow, MirrOlures such as the Catch 5, Catch 2000 and the time honored 51M will do it.

Don't worry about the "slow and slower" retrieve. That is mostly a situation specific deal. Matter of fact; don't worry about what anybody says about proper retrieves. Get in there and make it look like something that needs to be eaten and put it where it will.

If bottom bumping is called for, hopping a Texas Trout Killer II on a light jig-head lent a lot of confidence. Same as my favorite Corkies; I like white & chartreuse for winter work.

Topwaters can certainly work well and I would prefer them but the windows when winter fish will come up are often small. Let's don't be a float head here. If they won't come up or just swirl a topwater, by all means take that as a small clue. Best topwaters last year were She Dogs in green/chrome and chartreuse Skitterwalks, but probably because that's what we were using. If conditions call for a slow but louder presentation, try the She Dog. For spookier situations, the full-sized Skitterwalk does a good job. For more consistent results, drop it down.

Several things I'm going to do differently this year may seem small but can have huge consequences. One is taking time to tie on a leader. Although there is not much line-cutting structure here, teeth and barbs have helped hard-earned opportunity snap away more than once. I'm using a rod length of twenty-pound fluorocarbon by Gamma; a line to line connection with either a double surgeon or double uni-knot. A neatly tied and trimmed knot goes through the eyes just fine and gives us that extra advantage. One of the most sinking feelings we can have is watching an aristocratic trout you've worked so hard for swim away, especially while taking your highest confidence Corky that you keep gluing back together.

Drag washers are going to get more attention also, and the standard tub of Shimano Star Drag Grease is as good as it gets. Yes - we use the best of the best of reels, Shimano of course, but even they require a little love for best results. Our equipment is what catches and lands these larger fish, so enough cannot be said about quality and care.

Another thing that needs to be different this year is refining the art of stealth. There is, and always will be, a lot of folks out there who are, ugh, high on passion but low on initiative. It's almost comical, but if you shut down for lunch somebody is probably going to pull a drift right through the water you were planning to wade next. It may be time to pen Combat Fishing - Part II.

Just give me my Corkies, high percentage areas to wade, good people, and I'm good. If that doesn't get your blood up we are genetically different. If this sort of effort appeals to you, you need to get out there this winter and set your own personal record. They are here, where are you?