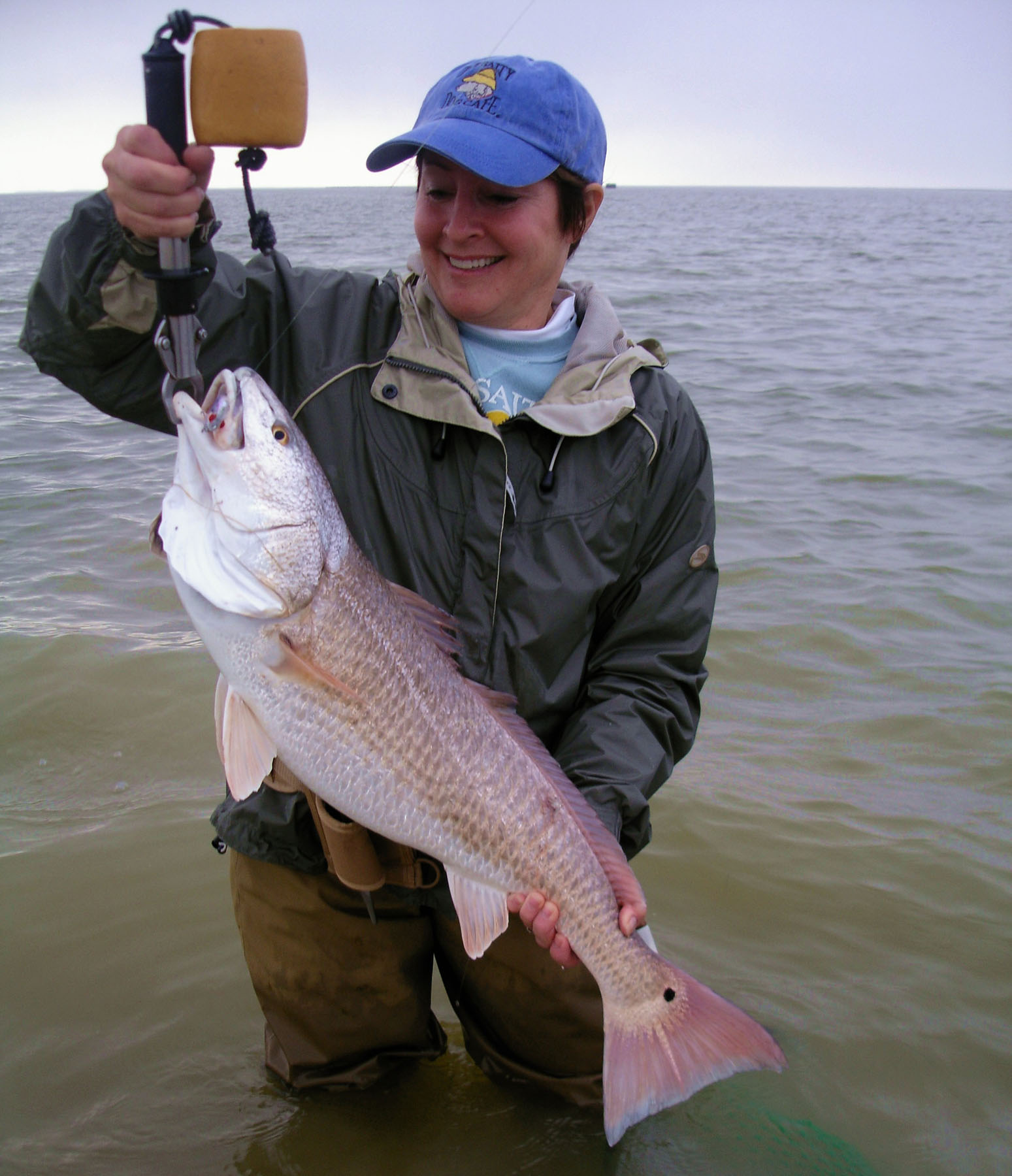 Judy Airhart put on a shallow water clinic with the little MirrOdine.
"It's April, so get out there with the biggest topwater you can find for those big trophy trout!"

Well yes... and then again maybe no. We hear and read that same old spew every spring, and unfortunately many of us simply stop our brains right there. Sure, there is little can compare with the third dimensional experience of "trophy" topwater fishing. Not only do we get to feel that head-shaking power, we also get to see and hear the strike. However, despite the enchantment, banging a big topwater around all day isn't always our highest percentage approach. When targeting the best Nature has to offer, we might consider dialing in our presentations a little tighter to the conditions. It might be called being a tuned-in fisherman instead of just a semi-conscious rod-whacking surface beggar. We can do better.

Despite the feverish "big bang" theory, less is often decisively more. One of the first lessons I didn't learn for a long time came courtesy of a potlicking co-worker. You know him, one of those guys who will just flat get on your stuff after you make the fatal mistake of taking him there, and then ten years of bloody trial and error are instantly evaporated unto the masses. I had waded out to a sacred little reef only to find, you guessed it, a big potlicking grin taunting me. He hoisted a full limit of trout that I'd dare say averaged twenty-three inches, including a couple of heavy kickers.

"Hey, it's good man, caught 'em all on this." He showed me a stupid little twin-tailed freshwater sparkle beetle, clear plastic body with a red dot and a bit of glitter. Why he chose that I'll never know; my guess is he was too cheap to step out of his already stocked bass box. The results were painfully obvious while my MirrOlures and topwaters couldn't even snag a mullet. I refused to acknowledge the catch for years discounting it as a fluke, but eventually the thinking process began to mature. Bigger fish, as we all know, and for a lack of a better term, can get very picky at times. And they can get especially picky during spring given the abundance of juvenile forage.

We are very fortunate to fish a lot of clear water in the Laguna. Not only do we often get to see fish eat, but we also get to see them run away from overbearing applications. You learn from that, and yes it all still applies in waters not so pristine. There is often a fine line between fooling fish and freaking them out. Last month Jay Watkins wrote about presenting a bait at angles so it didn't look like it was attacking from the rear. If you absorbed anything from that magazine... take Jay's lesson in real deep.

It's the same principle here, where we present a bait that entices a fish instead of threatening it. Throwing a topwater as far as we can straight downwind and just jack-hammering it home does not display a lot of cerebral mass. On the other hand, it's way cool to slow down, drop down and be delicate; making multiple casts with high anticipation into those small holes where we just know a big fish has to be. THAT... is angling.

Last week we were in knee deep and less water where we knew big, finicky trout were milling quietly amongst big reds. There was no feed, and it was one of those mid-day spooky situations where if you walked too fast you could see wakes of big fish kicking off well in front of you. Larger baits were not only refused but they ran from them. Something small and non-invasive made sense. I had just caught a seven pounder on a little Devil Eye, then Davis Baker slid up with one of those Corky Jr baits with a spinner on the tail. A mature ten and a half jumped all over it. We knew that little bait was a real "get bit" number, now we know that it's a big-fish bait when they are down and discriminating.

There are many non-threatening lures that qualify for probing big trout haunts, but never look beyond a simple soft plastic for big bites. Many top-end trout have fallen to plastics wielded precisely by good fisherman. I once watched Capt. Tricia pull three twenty-eights out of a little bitty shoreline trough that I had just saturated with both topwater and Corky. She did it by standing still and carefully dragging a little paddle tail over every inch of it.

For the pluggers in us, MirrOlure's relatively new MirrOdine has been excitingly productive. Interestingly enough, the one with no color, just pure silver flash, has excelled. Short twitches make it blink like a beacon. It suspends where you stop it and can be fished very shallow in delicate situations. It also lends itself to single hooks such as the 1/O Gamakatsu Live Bait hooks shown. Pictured is Judy Airhart who put on a clinic with this little plug.

Downgrading a presentation doesn't always have to mean size. Color and noise reduction works too. For example, there is a huge profile difference between say a pearl/chartreuse Corky and a translucent one such as the hologram. Some baits, even in less than ideal water, can look ridiculously out of place, and there are days when the fish like the old ones without the rattle.

A good example occurred during the Galveston Troutmasters back in the spring of 2OO3. I worked a shin deep sandbar in San Luis Pass with a small knee deep depression running down the middle of it. Swirling clouds of glass minnows were being swept down the small funnel with the incoming tide, and some quality fish were quietly laying in wait where other predators such as porpoises couldn't bother to them. Topwaters and other high profile baits were ineffective, but by letting a clear hologram Corky with no rattle ride the current into them, it proved good enough to win the event.

Picture walking a quiet shoreline this spring. The bait is shallow next to the bank and the water is relatively clear. What are you going to throw? Although an obnoxious She Dog can certainly overcome a lack of skill at times, something like that wouldn't be your first choice. Think about casting something with just enough profile for them to know its there and enjoy what you may have been missing.

Size DOES matter in just about everything we do in life. Big trucks, big boats, even our women train us that bigger is better... diamonds and such, you know. However, when it comes to fooling great fish on a lure, even though the stigma of big bait = big fish is hard to overcome, consider being more of a calculated angler. It works.