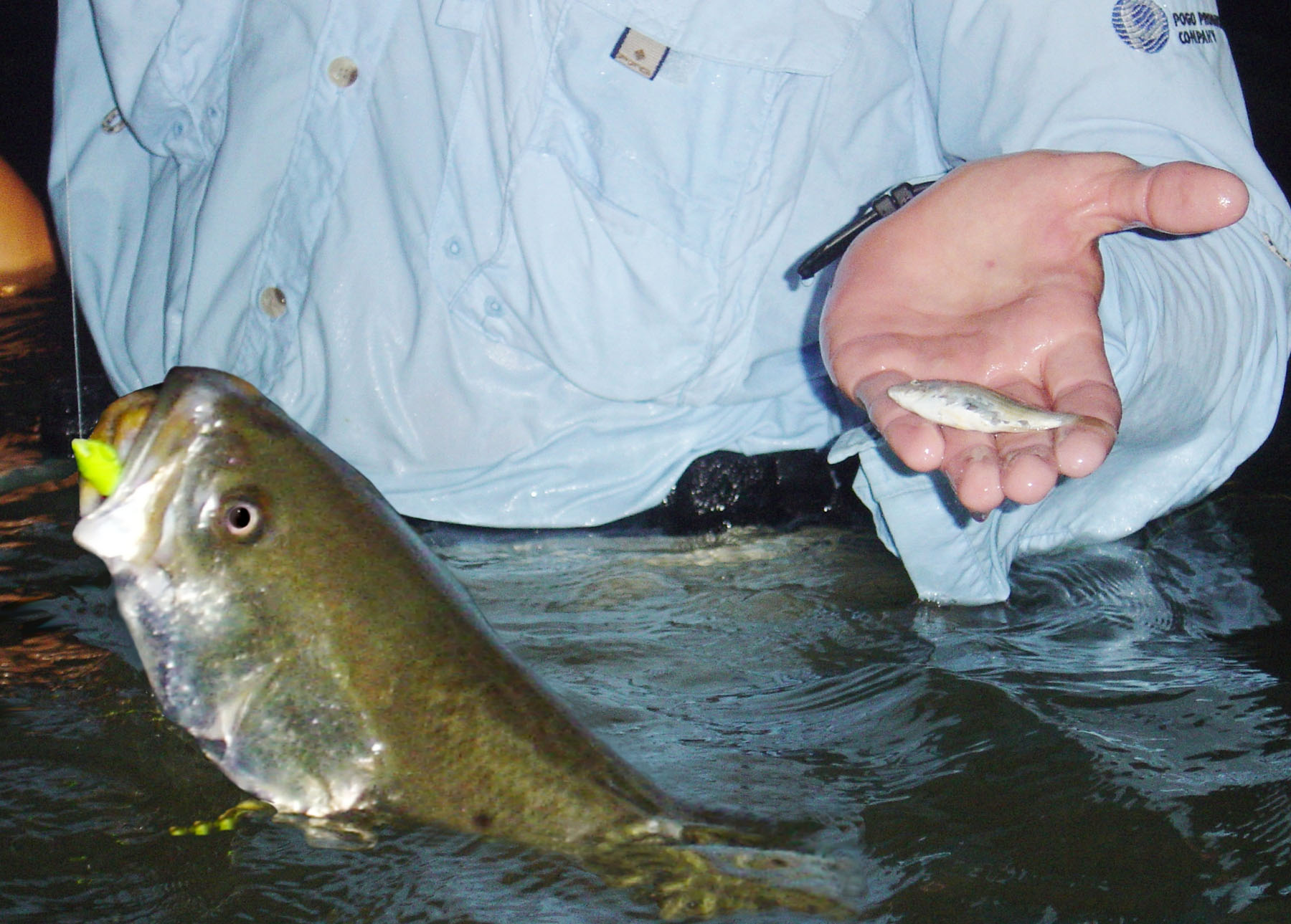 Sometimes it helps to know what size bait they are eating.

"Man, I don't know what's wrong. I've been fishing the coast for thirty years and never caught a trout over twenty-four inches. Do you think it's bad karma or do I just really suck?"

If you talk to enough fishermen you will soon understand that this is actually a rather common predicament. I say this because back when I used to do fishing seminars, I'd ask my groups, "How many have caught a trout over twenty inches let's see some hands." Naturally, everybody's hand shot up and so I'd repeat the question several times increasing the length of the fish. You might be surprised to learn how few hands would still be wagging when the length exceeded two feet. When I got to twenty-eight or twenty-nine there would be only one or two left and these guys were so proud they wouldn't bring their hand down until a buddy put an elbow in their ribs. So, if you haven't gotten a big one yet, do not despair; you have a lot of company. And there is something you can do about it.

October is upon us and it's time to get serious, especially if you want to be able to raise that hand a little higher the next time the question comes up. However, before we get underway, I'd like for you to consider a couple of proverbs. The first is ancient and Chinese "Man who waits for roast duck to fly into mouth must wait very long time." The second is more modern and from closer to home. Actually, it came from an old crust that ran a bait camp I used to frequent "You ain't catchin' bigger fish 'cause you ain't fishin' for 'em."

It goes without saying that many fishermen have caught many outstanding trout, some came as the result of focus and planning and some didn't. Some wore designer fishing duds and some sported mullet haircuts and stained wife-beater shirts. Regardless of style or method, everybody's stories, theories and philosophies are different. For every one that seems to work there is another that discredits and prevents it becoming an absolute rule. There is no question that big trout are caught where you find them, whenever you find them, and on whatever you happen to be throwing. However, if you are looking for better odds, here are a few personal stories that might help.

31-1/2" - May 1st 1988: It was during one of the old Marburger tournaments in the back of a high-percentage West Galveston cove. I waded from sundown 'til sunrise under the full moon. Conditions were perfect; light southeast wind and strong incoming tide, yet I had zero to show for it. As the tide went slack, it occurred that whatever hadn't happened wasn't going to. I cut the night-long topwater off and tied on a Kelly Wiggler shrimptail, hoping to catch a last minute redfish for dinner. My first cast to the drain I'd been pounding was met with a slight tap. That trout was an eel, weighing only 8.25 pounds, but it built a fire in me. Reflecting on that experience taught me several lessons. Among them; some fish seem to exit marshes at the end of an incoming tide rather than the beginning. Others will stage at the mouths of drains waiting for the first ebbing current. And, bright moons aren't always what storytellers crack them up to be.

31-1/4" - May 14, 2004: Spoil bank along the ICW, Hades hot doldrums at high noon, moon set occurring near the end of a two-foot incoming tide. The water was stupidly clear, devoid of bait, but a strong current created a sliver of muddy water over a slightly deeper trough on the bay side of the spoil. Overall, fishing was dead, but it was a known big fish area. The muddy streak was running in water about a foot and a half deep over soul-sucking muck. I had never walked this particular stretch but it looked right. A cast to the shallow bank found a single "lay-down" fish willing to suck a gently rocked She Dog. Where do bigger fish go when they're not eating? To nasty, out of the way, unmolested places where they won't get eaten. But you'll need confidence, be willing to pass up smaller action, and get in there and fish for them.

31-1/2" - March 2005: Walking a shelf on the ICW during an eerie sun-up. Hazy, zero wind, no current, no surface activity. The silence was shattered by an occasional big whoosh far behind us, apparently coming from the bank. Finally going to investigate, I stepped across a shallow ridge into a trough paralleling the bank and right into a pod of five big trout (that I could see) in ten inches of clear water. Two peeled left, one laid on her side and nearly went across my booties, two others eased right. I followed to the right, but all I had was one big topwater, which wasn't going to work. Then, like Barney Fife with his one bullet, I remembered a beat up paddletail in my pocket I was saving for the jighead. Following slowly, I had enough time to bite and re-tie. The bigger of the two evaporated, after fifty yards and many casts, the one I trailed finally slurped. Many things learned here. It was a small school, if you would; again discrediting the theory that large trout are always loners. They were shallower than most would imagine, probably avoiding predators. The lure was literally a piece of junk, but keep casting!

Multiples - January 28th 2006: Day before new moon, dreaded post-norther bluebird, zero bite. Light south wind mid-afternoon began streaking an otherwise clear strip of hard shoreline. Baitfish began happy jumping and moving to the streaks. No evidence of feeding, but on a gut feelingwe waited, even though I'd never fished here. The wind laid and the bait seemed to vanish. Looking closer we noticed baitfish flashing nervously near the murky two-foot bottom. Forty-five minutes, and exactly while the moon was dropping, among other worthy fish we caught two twenty-eights and three twenty-nines, mostly on Corkies. Topwaters were totally ignored. Many lessons; be patient, read your water, don't be afraid to fish where you haven't, bigger fish do bunch up, the bait doesn't always have to be on top, there are structures other than mud for winter fishing. Lastly, there just might be something to that moon stuff.

Beast & Beastier - February 12th 2006: Day before full moon, day after norther, sunrise air temp 38F rising to 69F mid-afternoon. Full sun early, excellent redfish action early on grass-mud flat near deep water. Twenty-eight inch trout from school of reds at noon. Late in the day the wind shifted south and the barometer started dropping. As the moon started to rise the bait began balling up and feathering the surface along a narrow, shallow shelf adjacent to a deep drop. The window was short, maybe 45 minutes; I caught two fish back-to-back under "horse" mullet on a pearl-chartreuse Corky. No Boga Grip, both released, no idea what they weighed, dubbed them Beast and Beastier, probably my two heaviest. Lesson? As in an article I wrote several years ago, "A Little Change Will Do You Good." There were several feeding triggers and throwing a mullet-type bait at the right time didn't hurt. Go with your gut.

32-1/2" - July 9th 2006: Day before full moon, spoil bank, classic mid-day major feed period. There had been a flurry of smaller fish at sun-up then all went dead. As if on queue, the wind picked up right as the major started pushing water and creating a muddy rip through a small funnel. A Skitter Walk worked hard in the increasing chop was met with violence from a long fish. It was a single fish in a small hole, and again, in a place I'd never probed before. Big fish live near deeper water. Believe they are there, and just do it.

Multiples Again Feb 26th 2007: Post norther, water temp up to 70F from 60F two days previous. A sun drenched shallow shelf near an east-facing spoil bank, knee-deep grassy potholes and mud, quarter moon with major feed at sun-up. Good bait, light SE wind, air 50F heading to 85F. Working a color change near the bank where mottled grass sloped from shin to thigh depth. We weighed two at nine pounds and measured another at thirty inches. One Corky Fat Boy, one topwater, one on a tail. It didn't last long, about an hour, and if you were "off the line" you missed them. Several others missed; an ice cream condition school pattern.

30-1/8" - April 17th 2007: Day of new moon, my birthday! Sustained twenty mph SE increasing to over thirty by noon. Zero bite all morning. Slight wind switch from SE to S began to drain a shallow flat towards a knee-deep gut. Baitfish began exiting the flat. Just before noon, at the supposedly mystical lunar major, large mullet began to ball up in what had become muddy whitecaps with two-inch visibility. For an hour, She Dogs worked near pods of mullet were met with occasional swirls or massive detonations. Adrenaline ran high. Although the blow-up to hook-up ratio was frustrating, I landed one right at nine and another a little over eight and three-quarters. Lessons? Don't be afraid of muddy water. Loud topwaters work well in whitecaps, let the bait show you where, and again, that solunar table just might suggest when to put in your best efforts.

We could chronicle many other catches, both by myself and enthusiastic clients, but the moral of the story is that if you want a big fish, learn a few rules, then learn to break some. As Kevin Cochran wrote last month, there are school patterns and then there is grinding for a single big fish. Chances are we can catch a big fish anytime we go, better if we fish for them.