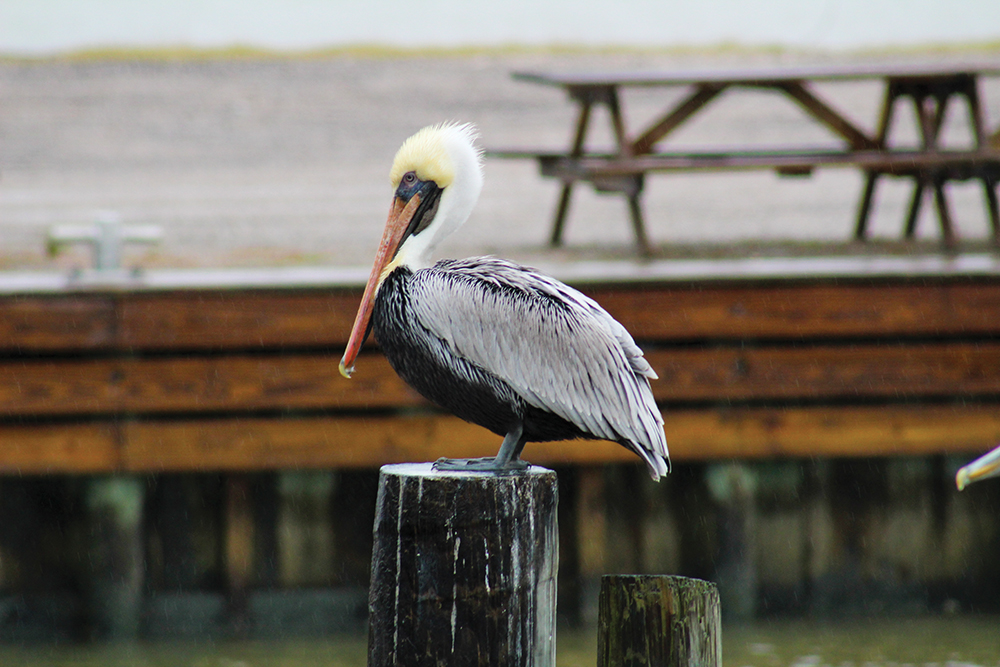 Another rainy winter day. Even the pelicans are bored!

For the January 2018 issue of this magazine I wrote an article I titled Reflections of 2017.  The positive feedback was overwhelming so I’ve decided to make it an annual thing.  It’s kind of fun to look back at events that took place over the course of the year.  Furthermore, I believe in many cases it helps us better understand where we’re going by knowing where we’ve been.

2018 blew by faster than anyone could have ever imagined.  There were moments when I wanted time to stand still so I could soak up everything, and then there were other times when I wanted to fast-forward through a week straight of tumultuous weather.  Overall though, I can’t really complain about what 2018 provided for me, my family and my clients.

The first couple of months of the year gave us true winter-like conditions with hard freezes in early and mid-January.  On January 2nd and 3rd the Texas Parks and Wildlife Department enforced temporary fishing closures in selected areas along the Texas Coast.  We dodged a bullet here in Galveston Bay as very few fish were killed other than large numbers of mullet.  I heard rumors of some trout mortality in areas along the Coastal Bend but I’m not sure if it was ever confirmed.  Trout fishing was steady for us in and near deep water muddy areas during the cold periods.  The trout were solid ranging from 2- to 4-pounds with an occasional 5-pounder in the mix.  Most were caught on various soft plastics and a variety of MirrOlure mullet imitation plugs.  There were five or six open water schools of reds that we fooled with when we wanted to on the calm days.  The smallest red we caught from these schools was 31 inches.  The largest was 44.  This seems to be a common year-round occurrence these days.

Winter seemed to only last for a little more than a month then it warmed up really fast by February.  There were many days in the upper 70s.  We caught trout wading in areas that typically produce in late March and April.  Overall, most were just keeper-sized fish ranging from 15- to 17-inches with quite a few undersized ones in the mix.  As is usually the case, better quality fish started showing themselves in March and April.  We caught lots of 2- and 3-pound trout but only a few managed to hit the 5- and 6-pound mark with the heaviest weighing 6.5-pounds.  Five and six pounders are certainly nothing to scoff at but compared to years past the sheer numbers of five-plus pound specimens seemed to be down in this bay system.  These are not only my own observations.  The same sentiment is shared with every fisherman with whom I’ve had this discussion.

May uncharacteristically provided us with many moderate wind days which enabled us to run most of our trips.  Drifting and wading over shell produced decent numbers of solid trout and reds.  Our incredible shad hatch caused the trout to suspend high in the water column for most of the month.  As a result, May 2018 is when I officially fell in love with floating and suspending twitch baits.  Borboleta’s family of baits (Lele, Tan-Tan and Perversa) and Texas Custom’s Double Ds literally changed the way we fished…in a good way.

Much of June was plagued by stiff southwest winds.  My clients and I were only able to fish about half of the month.  Shad concentrations were still prevalent and more visible slicks made locating schools over reefs and unmarked structure pretty easy.  Tails, twitchbaits and topwaters would remain our baits of choice for the next few months.  The only things that really changed from June to August were shad concentrations and the depth of water in which we targeted trout.  Tiny shad suspended by the millions throughout the water column for months until they grew larger and moved on.  In addition, water temperatures obviously rose as summer progressed forcing our fish over deeper shell.  We actually worked schools in deep water over mud bottom for several weeks late in the summer while following breadcrumb trail slicks.  The majority of the trout ranged from 16- to 18-inches and most were tide-runners which had come in from the gulf.

I was on a hell of a roll catching good numbers of trout and redfish just about every day through the end of August then bam!  Here came the storms.  We’re not just talking about a little rain here and there.  Galveston saw the wettest September in 133 years and second wettest on record with almost 25 inches!  Just to put it into perspective, the average rainfall for Galveston in September is 4- to 5-inches.  It was reminiscent of late August of 2017 when Harvey caused massive flooding in our area.  The difference this go-round was that it continued to soak us over a span of several weeks as opposed to a few days. Needless to say, this drastically changed our fishing patterns.  Water temperatures cooled and salinities in areas that had previously been seventeen parts per thousand dropped to less than two.  We relocated to locales towards the southern end of the bay and fished dark colored soft plastics near the bottom (underneath the freshwater blanket).  There were gulls and terns working in many areas feeding on tiny white shrimp that had been flushed out prematurely by the excessive run-off.  Most of the trout beneath them were tiny as well.  As usual, we managed to make it work all the while looking forward to October.

The first six days of October started out pretty well.  Water was clearing up in a few areas and we were able to find a few patches of good quality trout to play with.  Just when I thought we were in for a decent stretch of fishing the storms and winds came again.  We only got to fish five days from October 7th to October 24th.  East and Central Texas also got pummeled with rain during the same time frame.  Most of the runoff from East Texas would eventually find its way here.  The Lake Livingston dam would eventually see releases of 89,000 cubic feet per second.  Trinity Bay was just beginning to show promising signs before it turned into a giant catfish pond once again.  Even with all of this, we still found pockets of salty water that produced for us.  Some were in very unlikely areas while others not so much.  Soft plastics near the bottom remained king.

Our first legitimate cold front hit around mid-November bringing air temperatures in the low 30s.  Surface water temperatures dropped into the upper 40s for a brief period forcing our fish into a winter-like pattern basically overnight.  The first calm day after the front was pretty good stuff.  Birds, slicks and bait concentrations showed us the way as trout and reds were gorging, sensing the onset of winter and a diminishing food supply.  Large soft plastics such as MirrOlure Provokers and Down South’s Super Models in dark colors kicked butt in the dirty water in which we were forced to fish.  We caught a few fish in the 4.5-pound range but nothing big by November standards.  I witnessed some giant flounder being caught towards the end of November.  My dear friend, Bubba Pyle, caught the new Galveston Bay water body record weighing 10 pounds 3 ounces.  Bubba did mention that he felt overall catch numbers were down (despite the quality) in 2018 compared to 2017 but he also said that a lot of it is timing.  I tend to agree with his assessment.

Much of the end of 2018 was spent down at the ranch in South Texas with my family and close friends. Spending more time with the kiddos hunting and fishing has been a major priority for me in recent years.  As we get older everything becomes more about our kids than ourselves, as well it should.  My daughter and I have hunted and fished together since she was four years old.  She’s now sixteen and has only one more year before she’s off to college.  My brother-in-law watched his daughter (my niece) bow hunt by herself for the first time recently on one of our ranch trips.  Paige is only fifteen but has become an avid hunter.  Much like my daughter, Brooke, she has an immense appreciation for the outdoors and spending time with loved ones.

God, I pray that this year is a great one…. if nothing else, then for our kids’ sake.  Happy New Year!