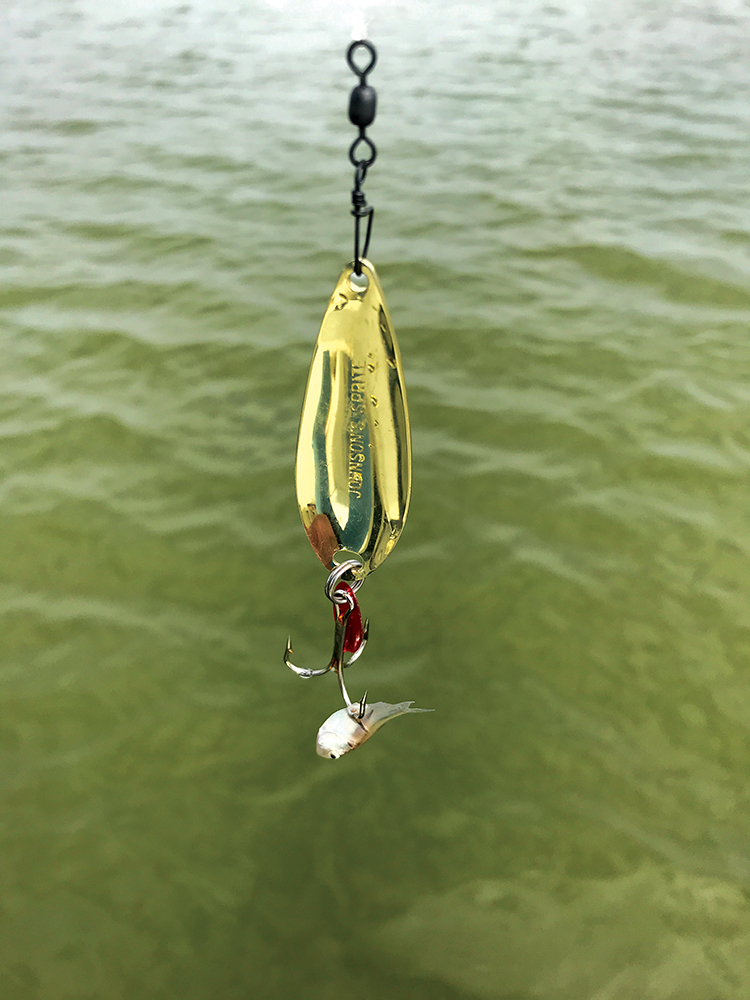 This is when you know the shad are thick!

After wading our way through one of the wettest winters I can remember, it appears that things are drying up a bit. More than a third of the Galveston Bay Complex was too fresh to fish (at least for any saltwater species) for the better part of the past five months. My time was spent bouncing back and forth between here and Matagorda during most of the last three months. It was a challenging situation for many but our ability to change bay systems not only saved many trips but proved fruitful with several personal bests for clients.

The great news is that fresh water that punished us is now breathing new life into our bay system in the form of shad, shrimp and many other beneficial marine organisms. The abundant supply of bait becomes obvious when terns and gulls can be observed diving in my prop wash just about everywhere I go. We’re even foul hooking dime-size shad with our lures.

My clients and I have been working birds here and in Matagorda since the third week in February. The fish were feeding on 81- to 100-count shrimp. I can only recall seeing this occur so early in the year one other time in my life. What blew me away even more was the fact that there were many white shrimp mixed with the brown shrimp. For those who are not aware, brown shrimp begin their exodus in the spring and white shrimp migrate to the Gulf during fall. Of course there are always whites that winter over but they are typically much larger than the ones I witnessed while working birds.

I suppose the reason for this rare occurrence can be attributed to many of the nursery areas being prematurely flushed by heavy rains. Then there were extremely warm periods during which the formula was conducive to shrimp concentrating in certain areas. Nonetheless, it was fun being able to catch solid trout and reds under birds about two months earlier than normal. Look for this to continue throughout the month.

The Lake Livingston dam is releasing water at 14,000 cubic feet per second (cfs) as I type and has been as low as 3,000 cfs in recent weeks. This along with some big spring tide swings has salted up more areas for everyone to fish. Let’s hope it continues. When everyone is doing their own thing and catching fish everybody is happy. The past few years have been quite the opposite with only a few areas holding decent concentrations of trout. We seemed to always be looking over our shoulders and a lot of folks were grumpy.

May will most definitely bring a more consistent and predictable pattern. The tiny forage will increase in size, water temperatures will continue to rise, and the metabolism of the game fish we seek will also be on the rise. They will burn more energy, therefore requiring them to eat more. As they eat more they will regurgitate more often causing beautiful hard-edged slicks to appear. Wading and drifting slicks is one of my favorite ways to catch trout and now is a fantastic time to do it!

An added bonus for this time of year is that we still have a great chance at catching above average size trout. Even though trout spawn from mid-April through early October (most years), peaks of spawning activity typically occur late April through May. Some of the fattest trout I’ve ever seen have been caught this time of year because they’re not only full of roe, they’re feeding on high lipid content forage such as shad.

Many believe that female trout in pre-spawn mode are mainly found on grass beds or up shallow. While these areas can certainly be included on the list they are not the only ones. Trout have been known to spawn on mid-bay reefs, in back lakes, near channels and in passes, just to name a few. It’s really more about when than where. Water temperature is the primary triggering mechanism but other variables such as salinity can affect the timing and productivity as well. Research has shown that the first big spawn of the year occurs when the water temperature is around 74°F. Trout prefer salinities ranging from 15 to 45 parts per thousand for productive spawning. We could be in for a good spawn with Galveston Bay salinities on the rise at the right time.

By the way, if you happen to stumble across an area holding unusual numbers of male trout, take note, especially nearing a full moon. This is the time of year when large numbers of males will occupy an area, setting the table for spawning females. Being a member of the croaker family, the drumming of male trout attract the females that are ready to spawn. We’ve caught some impressive size female specks mixed in with small males this time of year.

Some high percentage areas to target this time of year in the Galveston Bay Complex are coves and bayou drains, especially ones with abrupt depth changes and some type of structure. Such structure could include small oyster reefs or patches of seagrass. Watch for nervous or “balled up” bait and numerous slicks. There will also be times, especially during the early morning hours, when wakes caused by reds and large trout can be seen up tight to the cord grass. This is when I like to throw small topwaters such as MirrOlure She Pups or Heddon Super Spook Jrs. Be sure to cast well beyond and out in front of your target then gently walk it at a pace to where it looks subtle and natural to the fish. In other words, don’t hit the trout on the head with it!

Sometimes topwaters simply won’t get the job done. This is when twitchbaits come into play. I’ll try twitchbaits of the floating variety first and then proceed to suspending ones until I find what works. MirrOlure Double Ds, Double D XLs, and the Borboleta Lele and Hot Rod are superior choices. A floating Corky Fat Boy could also do the trick. When all else fails I’ll switch over to a soft plastic rigged on a 1/16 ounce jig head.

May does not discriminate between waders and drifters. Just as many trout, and even some big ones, can be caught while drifting open-bay shell. However, I will say that not all open-bay shell will be productive during this time. I like to focus more on reefs in 7-feet of water or less until later in the summer. Of course, there are always exceptions.

MirrOlure Provokers, Saltwater Assassins, and Down South Lures will all work well while drifting slicks and bait concentrations. I usually go with an 1/8-ounce lead head but a 1/16 works great if the fish are suspended near the surface. Medium to large size topwaters such as MirrOlure She Dogs and Rapala Skitter Walks can draw some explosive blowups while fishing out of the boat as well.

We’ve seen some promising signs up to this point and the overall outlook for May and hopefully beyond is bright from where I’m sitting. Remember to only keep what you need and let the rest swim, especially the bigger ones. I hope everyone has a fantastic start to their summer season. God bless!