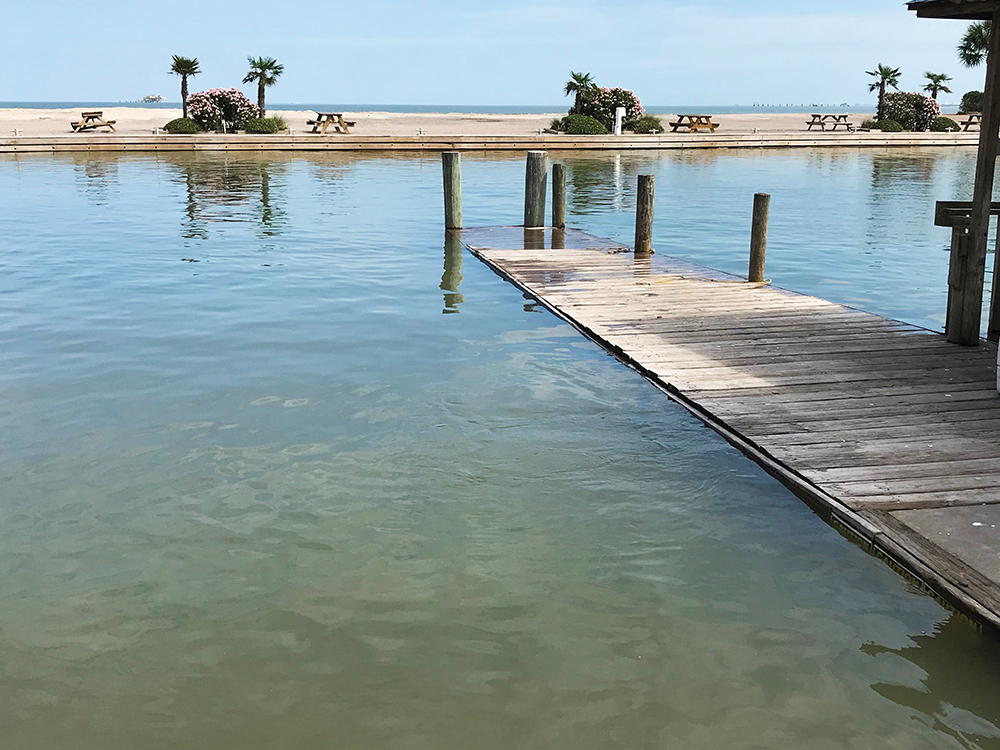 Many days of extreme high tides this fall made us work a little harder for the fish.

As I type this I’m wondering if we’re going to have a winter this year.  I’m not sure if I’ve ever seen a summer pattern this deep into the year.  I fished East Matagorda Bay last week and the water temperature hovered between 80 and 83 degrees.  When I got off the water today (October 23rd) here in West Galveston Bay it was 81 degrees.  Extremely high tides and warmer water has kept our fish more scattered than usual for this time of year.  Our pattern has been more like summertime in that we’re finding trout under slicks over patches of live oysters and on top of sand bars.  We’ve had glimpses of fall patterns with the two or three weak fronts that have passed through to this point but it didn’t last for more than a day or two.  During those short stretches, trout tightened up more into what I consider actual schools.  And we caught them in more typical fall areas such as around bayou drains and under birds in back lakes.

There’s another front that pushed through last night but it was a fairly weak one bringing with it slightly cooler air temperatures and a northerly wind shift.  The wind is forecast to flip right back around to a southerly flow tomorrow ahead of what’s supposed to be a slightly stronger cool front in a couple of days.

What lies ahead in the coming months is anyone’s guess.  Most folks here along the coast agree that we’ve experienced colder than usual winters following summers in which we got hit with a tropical storm or hurricane.  Several named storms hit the Texas and Louisiana Coasts this summer so one would think we could be in for a cold winter.

What to Expect with a La Niña Pattern -

If the latter proves to be true then we will have to adjust our thinking when it comes to “winter trout patterns.”  If bay water temperatures tend to range between 65 and 75 degrees most of the time then deep water and mud and shell patterns will be few and far between.  Inevitably, there will be a front or two that brings sudden temperature and tide level drops which could steer us (and the fish) in that direction but it would be only temporary.  A more likely scenario would be closer to what we’re already seeing, which is a more scattered trout population over shell, grass, and not-so-muddy bottoms.  Slicks may be more prevalent than what we’re used to during colder winters.  Metabolic rates for fish may be higher, possibly leading to more aggressive strikes as opposed to that soft and sluggish bite that so many folks tend to talk about.

What we are experiencing now can give us indicators of what’s coming next.  There are currently hordes of white shrimp as far back into the marshes, back lakes, and bayous as you can go.  With each weak front thus far we’ve experienced, birds are working, especially in smaller satellite bays.  Barring any major freshwater events we could see birds working all winter if NOAA’s prediction holds true.  I personally experienced this two years ago.  We’ve had another explosion of shad this year as well.  Shad is a very high lipid (fatty acids) content fish.  With higher trout metabolisms from warmer water and shad as one of their primary forage species, well-defined oily slicks will be easy to see.

Our baits of choice under the discussed scenario would most likely be a variety of topwater plugs, twitchbaits and soft plastics.  The MirrOlure family of topwaters ranging from She Pups up to the He Dogs will all have their place on any given day.  We’ll use the larger louder topwaters (She Dogs and He Dogs) in windier conditions and the smaller versions (She Pup and Top Dog Jr.) in calmer conditions that require a more subtle presentation.  Double Ds, along with the Barboleta Lele and Hot Rod, are my favorite twitchbaits by far.  Wading while casting twitchbaits up shallow over grass-lined troughs can be a trout’s worst nightmare.  Soft plastics will always be in play but we’ll typically use lighter jighead sizes (1/16th ounce) when wading versus boat fishing.  My top three choices for soft plastics are MirrOlure Lil Johns, Provokers, and Saltwater Assassin Sea Shads.

What to Expect If We Actually Have a Winter –

If we are frequented with stronger cold fronts, especially some of the Arctic variety, then we can expect a more traditional cold weather pattern.  If water temperatures stay more in the 50s and lower, we’ll find concentrations of trout in guts lined with shell and mud.  Spoils along the Intracoastal Waterway will hold fish as well.  Deep holes will be good areas to target, especially during sudden water temperature declines and low tides caused by big fronts.

When water temperatures drop into the 50s, the algae and plankton begin to die.  This leaves us with extremely clear water on calmer days.  But, when the wind increases we can usually find well-defined color streaks that serve as excellent thermal protection and ambush points for trout and reds.  Swift currents can also cause the streaking.  If we can find these color streaks along troughs or near structure that’s even better!

MirrOlure Paul Brown Originals are probably the most popular lure for serious wintertime anglers, especially those who get a thrill out of tricking big trout.  I love every bait in the Corky family but I’ve grown a tad partial to the Fat Boy floater in recent years.  Of course water clarity and light condition determines my color choice although my overall favorite is the Pink with Silver Glitter.  Other favorite colors include Glow, Strawberry with Black Back, and Texas Chicken.  I like the Strawberry with Black Back in slightly off-colored water.  I tend to lean more towards the sinking version of the Fat Boy when wading in windy conditions or when casting into deep guts.

Of course, even during cold winters, we’ll have those days in between fronts when water temperatures will rise and barometric pressure will drop.  This is typically when we’ll find fish on shallower reefs and flats adjacent to deep water.  Twitchbaits, soft plastics and topwaters will all play a role when this occurs.  Just a few flipping mullet can point us in the right direction during these circumstances.

With all of the crazy weather and all of the other crazy stuff going on this year, who the heck knows what to expect this “winter?”  Hopefully I’ve provided enough insight based upon the possible scenarios to improve your chances of a successful outcome.  Either way, feel free to call or shoot me an email if you want to discuss or even jump on the boat with me for some winter fishing, whatever that may entail.  I hope everyone has a very Merry Christmas with family and loved ones.  Stay safe!