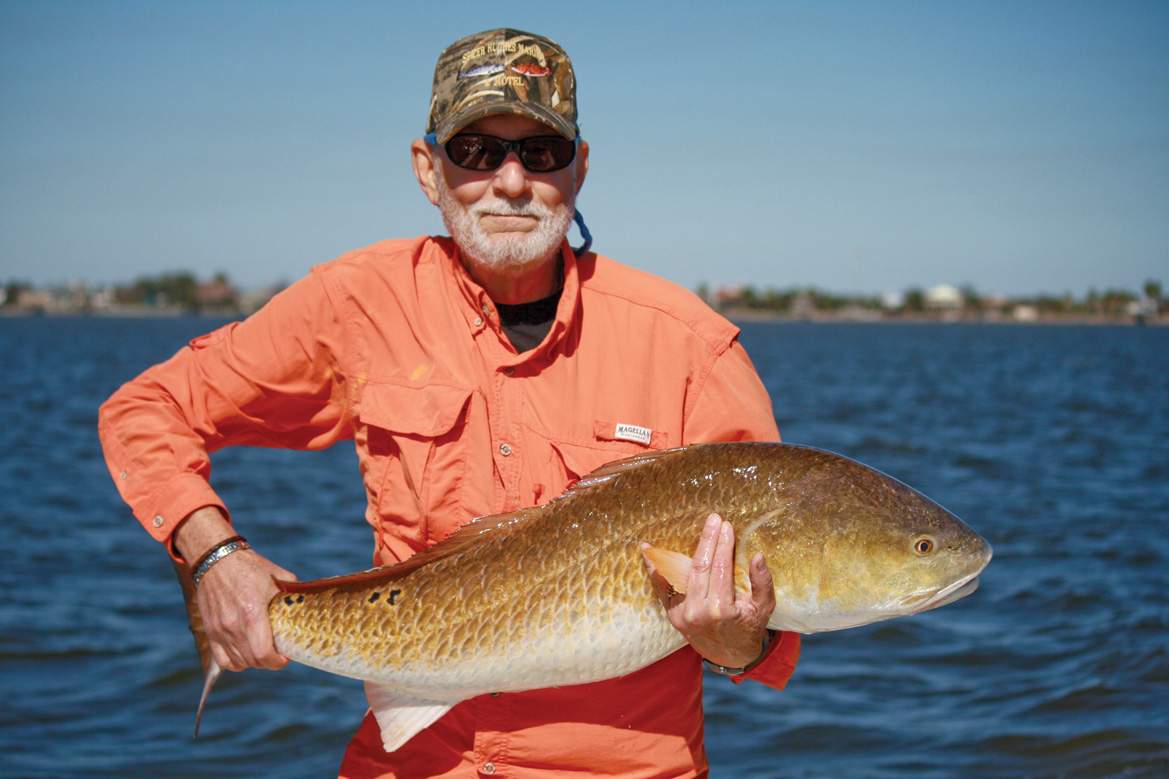 Bobby Brownfield served our great country in Vietnam and doesn’t take anything for granted, especially this 40-inch redfish (CPR.) Much respect for him and all of our military.

Great-grandpa T, Theodor Hillman, built 16-foot skiffs out of cypress planks and started his guide service on Dickinson Bayou around 1923. He would make cornmeal mush to throw into the water and then wait about 30-minutes and cast net shrimp that were feeding on the cornmeal.After catching bait they would row along the salt cedar-lined shorelines of the bayou, eventually arriving to destinations in nearby Moses Lake and Dickinson Bay. Cane poles were baited with shrimp or crab to catch trout, redfish, flounder and black drum. If he hooked a fish that was too much for the cane pole to handle he would fight it long as he could and then simply turn the pole loose and row over to it once the fish was tired.

He pieced an old boat together using parts of a Model-T Ford for its cabin. The 16-foot vessel powered by a 4-cylinder gasoline engine pulled a homemade shrimp net that was quite possibly the first to be fished in Dickinson Bayou’s bountiful waters. He made a live-bait cage out of redwood slats bridled on both ends with a hand crank and sold live shrimp for 25 cents a quart. His boat, Grandpa’s Pride, was later placed atop Hillman’s Café which was opened in 1959 by two of Grandpa T’s three sons, B.B. and Sonny. Sadly, the café closed in 1983 after Hurricane Alicia. The seafood market portion of the building, which is owned and operated by three of my cousins (granddaughters of Grandpa T), remains open today and is still going strong.The other portion of the old café is where the girls make nets for shrimpers.

Ingenuity and unsurpassed work ethic was engrained in Great-grandpa T’s generation and passed to the generations that followed, as making a living on the water cultivated its humble but deep roots along the shores of Dickinson Bayou.There was a sense of pride and accomplishment handed down with each generation throughout my family.

Almost ten decades later I find myself just as blessed to be making a decent living from the same waters as Great-grandpa T. I listen to stories of how family and friends pulled together back then to make ends meet and how they worked collectively to survive despite their differences. Then I think about where we are now.

Those of us who have been fishing these waters for quite a long time tend to get frustrated and even a bit grumpy at the sight of so many fresh faces popping up on the fishing scene. Most of them seem to be in the 18- to 30-year-old age bracket. We jokingly call some of them “flatbillers” because they wear their caps with the bill stiff and straight as a board. I’ve always liked wearing a curved-billed ball cap not necessarily because it was in style but because it served a functional purpose by keeping the sun out of my eyes. Practicality has always taken precedence over fashion for me, much to my wife’s displeasure.We sometimes poke fun at their 70-mph boats, calling them rocket ships. It could be that I’m just a tad jealous because my Whaler will only hit about 43-mph once the landing gear is up. Their dual Power Poles cause us to roll our eyes but I’m sure they’re more practical than we realize, even though we’ll never admit it.

I suspect some of the rancor stems from the upbringing and personal experiences of those of us who fit into the Baby Boomer (1944-1964) or Generation X (1965-1981) groups. Like those before us, we began working at a very early age with stern guidance from our parents. We stumbled at times but learned as we traveled a hands-on journey to adulthood. I remember Mom and Dad paying me $2.00 per hour to fillet fish in their retail market when I was 12 years old. Despite how many child labor laws may have been broken, I managed to save enough money to put a 9.9 tiller steer Johnson on my 12-foot Sears Kingfisher. I worked full-time (sometimes multiple jobs) all the way through college. We earned everything back then, including respect. We also had a great deal of respect for our parents and all who preceded them.

The only windows we knew had panes. The closest we came to having the internet in high school was MS DOS. Those Dot Matrix printers were pretty cool though! The only mouse I remember was the one we found dead on the floor in Mr. Brother’s shop class one morning. The internet hit the scene while I was in college but faded quickly because it was just a tad before its time (see dot-com collapse). Within a couple of years the stronger of the internet bunch survived and eventually paved the road to a new way of digital life none of us could have ever imagined. This digital era would forever change the way we do almost everything - even fish!

According to staff at the Texas Parks and Wildlife Department, millennials make up the fastest growing portion of resident hunting and fishing license purchases in Texas with a 12% increase over the past 7 years. During this same time, participation by Baby Boomers has declined and Generation X has shown only a minimal increase. The number of resident fishing licenses purchased by each group in 2016 was relatively close with Baby Boomers purchasing the fewest (261,540), then Generation Xers (371,588) and finally Millennials (394,825). According to the department, they expect Millennials to dominate the scene over the next decade as more become of age.

Despite the disconnect between older and younger generations, I’ve learned to ease up a bit on the young guns, especially since I’ve gotten to know some of them. After all, they’re fishing, and having a passion for fishing is one of the healthiest activities I know. We’ve all preached “take a kid fishing” for as long as I can remember. Well, they’re no longer kids, so maybe it’s time to quit passing judgement and embrace the fact that they got hooked just like we did and much of it was because of us.

Those impressionable kids we took fishing at 12- or 13-years-old are now in their 20s. Have we taught them the right way? What mistakes have we made? Have we made a difference? The examples we set in their early years helped mold them into what they are today. Despite some of the stereotypes, Millennials are a smart bunch as a whole, who are very willing to learn, have access to virtually unlimited information, and seem to care about conservation. They are also very competitive. Just look at who’s winning most fishing tournaments these days.

All of this being said, here are some concepts for not only the Millennials, but ALL generations to consider:

It’s encouraging to see how many young anglers are practicing catch and release. This, along with the help of Mother Nature, should keep our fishery heading in the right direction for many years. This being said, there should never be guilt associated with keeping some fish to eat. Just don’t be wasteful. We must continue to educate with knowledge-based facts and incorporate common sense into our fishing practices. As Boomers and Xers, we have to make sure our good examples transcend to Millennials, because pretty soon they’ll be the ones mentoring Generation Z. By the way, that flat-billed cap thing is kind of growing on me.