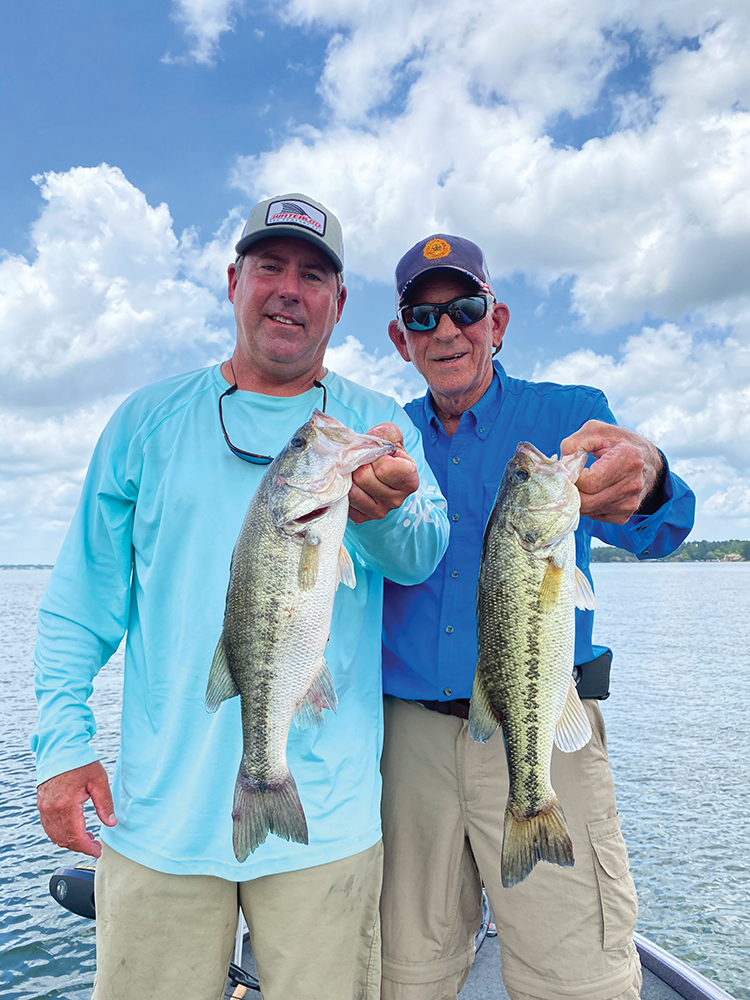 This man has taught me more about life than anyone alive. Special thanks to Capt. Tommy Alexander for showing us a great time on the lake!

I believe the year was 1975.  Along with my cousins and a few buddies, I was sitting on the little pier dad built where we lived on Dickinson Bayou. With our legs dangling off the end of the pier we would catch countless croaker, gar, redfish and hardheads. Our bait choices ranged from raw bacon to anything we could catch in a cast net. Things were simple back then or at least they were in our eyes. We built a fort in the vast undeveloped acreage behind my great grandma’s house down the street. We’d shoot doves with our pellet rifles then bring them home and cook them.  We made our own live traps and trapped possums, raccoons and sometimes the neighbor’s cat. I remember the zip line my Uncle Robert and his buddies constructed in the tall trees covered with muscadine grape vines. My pawpaw and grandma had a marine supply store there on the bayou where we had access to cable, pulleys and all kinds of other neat stuff. Dad also built a treehouse in a giant oak tree where our property sloped down towards the bayou near the middle of our beautiful, grassy five acres. None of our families had much money so we kids were “forced” to find ways to entertain ourselves.

Occasionally, me and some of the neighborhood kids would get into fights over silly stuff. It was usually while playing neighborhood football. We’d just duke it out and the next day we were best friends again.  I once got into trouble for being mean to my foster sister. My dad whipped my butt when he got home.  I wish I could say that was the only time he had to use his belt. Like most kids, I did some stupid stuff but I learned from all of it.

We always sat down as a family for supper and mom or dad always said grace before we were allowed to start eating. I remember eating vegetables from our garden along with venison that mom prepared just about every way you could prepare it. We also ate a lot of Hamburger Helper and Spam. When we finished dinner we asked to be excused before leaving the table. My brother and I would help mom clean the kitchen before we went to our room to do homework. None of us went to bed without saying “goodnight” and “I love you” to each other.

The closest thing we had to a video game was a Lite-Brite. For those who aren’t familiar, a Lite-Brite was nothing more than a plastic housing shaped somewhat like a television. There was a lightbulb inside and a plastic pegboard in the front. It came with colored plastic pegs that we used to form pictures of things.  I remember making a lot of pictures of fish. The Lite-Brite was only for the rainy days though because we always wanted to be outside.

Dad would ultimately clear our property to pursue his dream of going into the seafood business. A bulkhead eventually replaced that little fishing pier where we dangled our legs. The front of the fish house where we sold fresh seafood to the public was about where my treehouse once stood in that beautiful oak tree. Our vegetable garden was somewhere underneath many yards of packed oyster shell parking lot.

I remember working in our retail market during the summer months filleting fish when I was 12 years old. Dad always encouraged me to get the highest yield possible. Customers were answered with “yes ma’am and yes sir.” That was a no-brainer back then. He paid me $2.00 per hour. That “job” enabled me to buy a tiller handle 9.9 horsepower Johnson Seahorse outboard for my johnboat.

I started working on oyster boats when I was 14 and continued doing that until I graduated high school.  I had several other jobs which included cutting firewood, mowing lawns and working in our family restaurant. Dad was a firm believer in keeping us busy.  He taught us not only a good work ethic but to take pride in our work. He taught us to be selfless and always treat others with respect while at the same time not letting anyone push you around. The most important thing is that he practiced what he preached.

My brother and I worked our way through college. He blazed through the five year master’s program in accounting at the University of Texas and I graduated from the University of Houston at Clear Lake with a degree in environmental management. After a couple of years in the chemical industry I returned to our family seafood business where I handled the marketing of our products. I would take our customers fishing when they came into town. I got a real kick out of seeing their excitement level and very much enjoyed teaching them what I knew so I eventually decided to get my captain’s license. The rest is history.

I mention these tidbits about my life growing up because I sincerely feel like I was raised the right way. I believe many of life’s lessons can be applied on the water. I can think of many examples but let’s discuss a few.

It starts at the boat ramp. I’ve seen guys yell at others because they didn’t turn off their headlights while backing down their boat. While this is definitely annoying (and sometimes blinding), simply asking them nicely if they’d mind turning them off is usually more productive. Most of the time their reason for leaving them on was simply because they just didn’t know. Besides, who wants to start their day of fishing on a negative note before even leaving the dock? A little patience and respect will go a long way.

Saying that our bays are crowded these days is an understatement. There are fewer places to catch fish, especially on days when high winds force everyone to the same protected shorelines. This can cause tensions to run high. If you want to fish an area under these circumstances then you’ll need to get there early. Unfortunately, it may not matter if you’re the first one there because sometimes others will pull in regardless. While this is a frustrating scenario we have to remain calm. Some won’t put forth the effort to find other areas holding fish. Certain areas, however, can handle multiple boats as long as everyone fishes them the right way.  Another option is to just avoid such areas until later in the day.

The law of averages says that when you’re on the water almost every day it’s inevitable that an altercation will occur. All I can say is try to be the adult in the conversation. If tempers seem to be flaring up then continue the dialogue at a later time. Chances are that two grown men can work it out in a civil manner. After all, with all of the hatred and chaos going on in the world are we really going to argue over a fish?

Over time it seems that many fishermen have exhibited more aggressive behavior when it comes to chasing trout and redfish. I still know a few guys who would run over their own grandmother to catch a trout. Those are the bad ones and we will never convince them to change their ways. I don’t think it’s necessarily a generational thing because I’ve seen folks of different age groups use poor judgement.  Regardless, I think anglers should use the same principles on the water that they’re supposed to live by in everyday life. Being courteous and practicing sound ethics will gain you a lot more respect. Acting in a selfish way and wanting instant gratification will cause you to gain a reputation that will follow you for a long time. People will take notice.

After all, fishing is supposed to be fun. It’s something that many don’t have the luxury to do. We should be thankful. My dad told me years ago that your name is all you have. I’ll add to that and say that your name is like your brand. You wouldn’t want to ruin your brand would you?  Let’s all try to do better and lead by example. It’s the least we can do for our children.