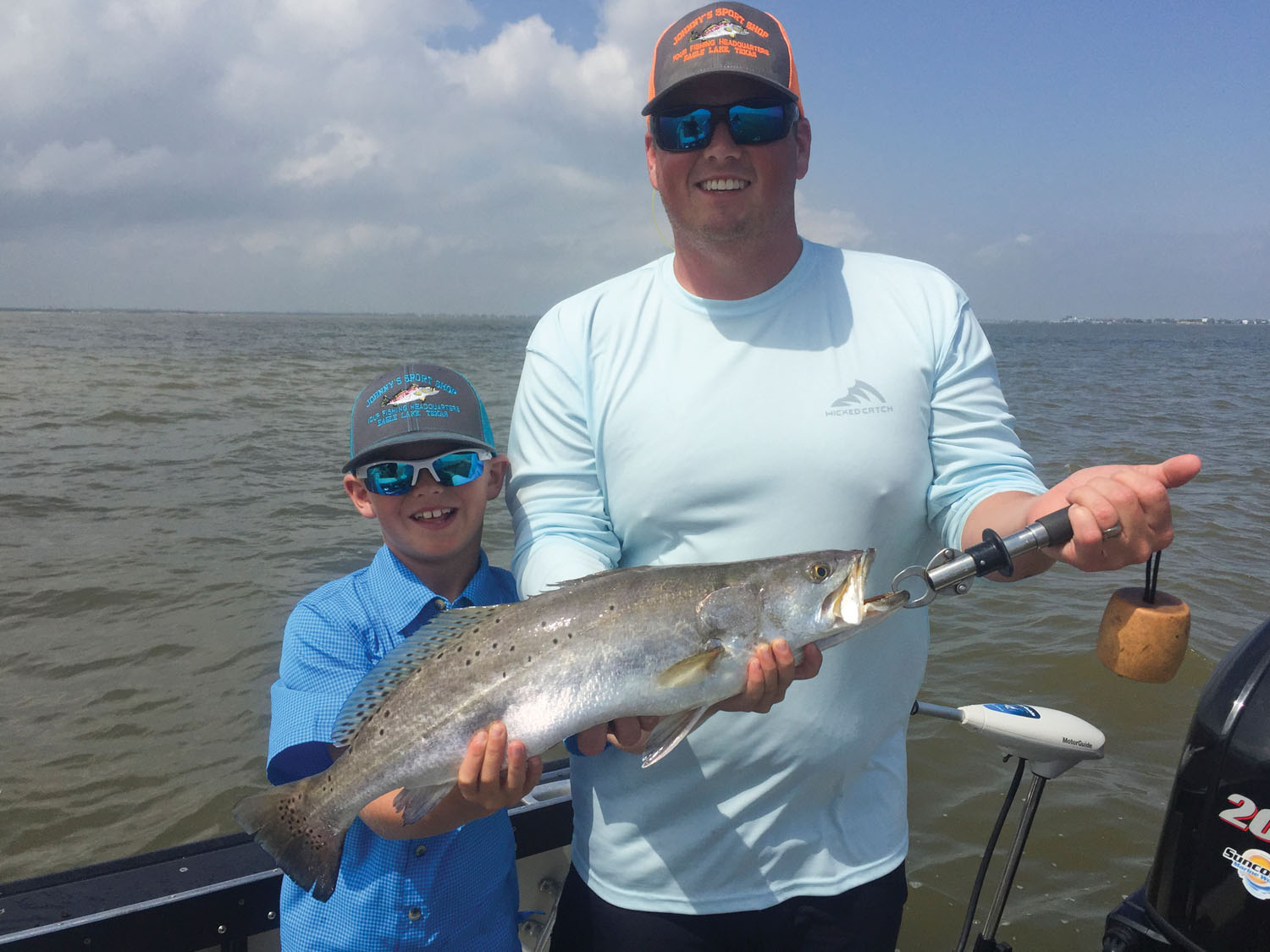 Don Satterwhite’s son, Dax turned 8 years old the day of this trip and already knew the importance of releasing fish like this 6.5 pounder thanks to his dad’s good example.

Having been born in Galveston and growing up on the water I was very fortunate to have regular access to Galveston Bay. My dad and my Pawpaw would take me fishing quite frequently. Sometimes we would use live shrimp and sometimes lures. Back then our go-to baits were Kelly Wiggler shrimp tails, MirrOlures (51s and 52s) and Jumping Minnows. The choice of baits held little significance to me at that age if catching was the end result. The time I was blessed to spend with them and the knowledge I was able to gain kick-started my life-long addiction. I was very young, but I trusted and respected my teachers.

Never overlooking a just-popped slick or a flipping mullet and surveying everything around him, dad's awareness level always astounded me (and still does). Pawpaw, a great fisherman in his own right, normally would just hang out near the stern and catch an occasional trout or red on his favorite MirrOlure. He stayed so busy working, I think he was just tickled to be on the water with his son and grandson. Besides, he'd "been there and done that." His words still echo in my mind, "There he is!" as he set the hook while simultaneously looking over at us with a beaming smile filled with satisfaction.

As a young teenager I saved enough money from working at our family seafood plant (aka the fish house) to buy a used boat. It was a 14 foot Sears Gamefisher with a 9.9 HP Johnson Seahorse. Dad wouldn't let me venture very far, but back then there was no need to travel great distances. Trout only had to be 12 inches and Dickinson Bayou was good for plenty of those.

Pawpaw bought a 21' Renken a few years later. He loved to fish, but couldn't find much time because his marine supply store required long hours. "Boy," he said, "somebody sure needs to use that boat. Just keep her clean and take care of her." He didn't have to tell me twice.

We used that boat so much that we finally put bottom paint on her so we could just leave her in the water. Dad and I fished almost every morning before going to work at the fish house. Having a bigger boat afforded more opportunities to venture into a whole new world. The Renken had no depth finder or GPS. Between the compass, a PVC pipe and the rafts of mullet that outlined the reefs I got by just fine. Magazines and tide chart cards (found on most bait camp check-out counters) were my sources for solunar and tide data.

I remember summer nights when the wind would get calm and I couldn't wait to get off work and drive my old 1979 F-150 down to the beachfront to fish all night. Fishing the rock groins in the dark while walking a blue-chrome Jumping Minnow along the edges of the rafts of mullet provided an adrenaline rush like no other. An occasional monster trout swimming just beneath the rafts always seemed to ignore our offerings. One night an older gentleman caught a 12 pound trout on a live whiting while fishing from the 61st Street Pier. They lowered a double ring crab net down and lifted her up to the deck. I couldn't believe my eyes. It looked like a ling with specks! The memories go on and on in my mind. Those experiences transformed my blood into saltwater that still flows through my veins 30 years later.

I've come to realize that others yearn for knowledge and want to become successful fishermen but were not necessarily blessed with the opportunities I was afforded. We often assume that most already know the basics, at least. Back in mid-March I was fortunate enough to be part of a seminar at the Houston Fishing Show. I was joined by Tricia Whitley, Bink Grimes, Ernest Cisneros, Everett Johnson and Caleb Harp. One gentleman asked about walk-in areas to fish around the Galveston Bay Complex. I offered a few suggestions then asked which species he wished to target. He said that he didn't really care. Drum, sheepshead, sand trout or whatever would bite would be fine for him. He went on to say that he was new to the sport, loved fishing and just wanted to catch something.anything. The desire was there otherwise he wouldn't have occupied that chair. He needed a starting point. Everyone has to start somewhere.

The first step is to pick a focus area. Most local sporting goods stores sell detailed fishing maps containing valuable information such as reefs, wading areas, walk-in and drifting locations, GPS coordinates and best months to catch desired species. This very magazine is a very comprehensive source which includes honest reports, strategies and everything in between. Fishing forums can provide current fishing reports too. There are books, websites and DVD's available as well. Choosing the right equipment to get started is a must. You can get into a medium light action rod and reel for under 400 bucks. A Concept A reel rigged on a Waterloo Salinity or Phantom is a fantastic value that is lightweight and sensitive. Seaguar Smackdown Tournament braid is a great line to use when choosing braided line. I prefer 8 lb. diameter 30 lb. strength. Also, many guides offer on-the-water teaching trips which should help jump start your angling education.

Once you've become comfortable with the area you're fishing you'll realize that "spots" do not hold much value until you understand timing and signs to look for while you're there. Don't hesitate to ask questions from others who have more experience. However, ask questions like "What signs should I be looking for" instead of "Where exactly should I go?" Otherwise, you're doing yourself an injustice. Partnering with someone who is more advanced is helpful as well. Ernest Cisneros said it best "If you want to become a better fisherman then fish with better fishermen." Some are content in their current state while others strive to attain the highest level possible.

In May the water temperatures will range from the mid 70's to low 80's and trout will no longer require the thermal protection of mud. Hard shell, sand and grass will help narrow your search. Learning how to identify slicks is a very effective strategy. Understanding how current and wind affect slicks and the significance of small ones versus large ones is necessary to produce favorable results. Determine which part of the water column is holding fish and which lure to throw. Trout begin to school and become more aggressive as water temperatures rise and forage species grow. Slicks, birds and concentrations of bait become primary targets. Slow-sinking plugs such as MirrOlure's Paul Brown Originals give way to MirrOlure Provokers, Lil Johns, Bass Assassins and topwaters. May provides great opportunities for anglers new to the artificial game because catching trout can be relatively easy.

Now it's time to fine-tune your skills by using your senses and instincts. By the time you've reached this stage your awareness level should be well above average. Whether wading or drifting, keeping your head on a swivel will enable you to make every cast count. You will know the right time to visit areas based upon major and minor feeding periods, bait movements and tides. When tides are weak you'll fish areas near channels, passes and the intracoastal. Heightened confidence and depth of knowledge will enable you to almost see what's beneath the surface and make you feel like you are "in the zone" every time you start a wade or a drift.

Lure selection will become second nature. As you mature as an angler, numbers will become less important and the challenge for bigger and better fish will consume you. Releasing those impressive specimens will bring you immense satisfaction. You'll begin to notice and appreciate little things like unique characteristics of some of the fish you catch as opposed to just plopping them down on the Check-It Stick to see if it's a keeper. Your nose will detect a trout slick before others can even see one. You'll cause finicky trout to make mistakes when others can't buy a bite.

The culmination of everything you've learned will come together and you'll think you've reached the pinnacle of your fishing career. Then, on your very next trip you'll realize that there's still more to learn and some of the puzzle pieces don't seem to snap into place like you thought they would. That's when you realize that you're still not satisfied.