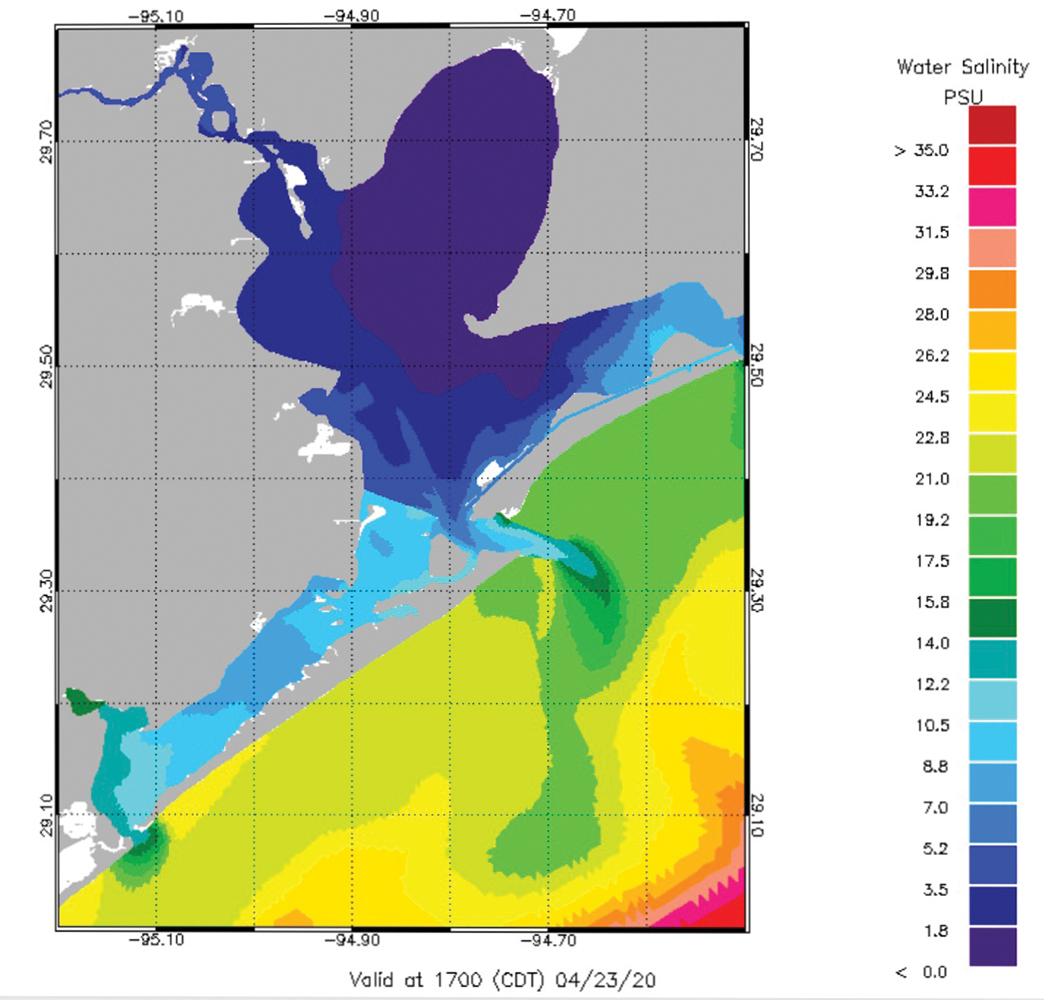 Salinity map of Galveston Bay Complex; purple and dark blue are not my favorite colors these days.

I don’t know why. Maybe because I’m a glutton for punishment. Or maybe I just wanted to pretend something miraculous happened overnight and our entire bay system became fishable again. Already knowing what I would see, I pulled up the OFS Salinity Nowcast model on my phone to see if Trinity Bay was getting any saltier. Not surprisingly, it was even fresher than the day before. I further confirmed this by viewing another website that I had saved in My Favorites. It showed that the Lake Livingston Dam was discharging at a rate of 43,000 cubic feet per second (cfs). For those not aware, the normal discharge rate for this time of year is between 4,000 and 5,000 cfs.

With all of Trinity Bay showing less than 2 ppt (parts-per-thousand) salinity it looked like I’d be heading over to East Galveston Bay again. But upon closer examination I noticed that the fresh water had now turned the corner around Smith Point and made its way almost halfway down the north shoreline and was now as far south as Hannah’s Reef.  The south shoreline of East Bay would be too crowded and boats were stacked like cordwood in West Bay because of all of the hot reports coming out of there. I figured I’d just take my chances and head north. Hopefully we’d catch them there despite the off-colored water.

Galveston Bay, like most bay systems, has many moving parts which all play a vital role in the overall health and longevity to not only our trout fishery but all living marine organisms within its boundaries and even beyond. One of these ever-changing variables happens to be salinity. The expanse of the Galveston Bay Complex contains estuarine habitat that includes river mouths, marshes, and shallow back lakes, just to name a few. The single most influential portion of this complex is the mouth of the Trinity River.

In normal years, if there is such a thing anymore, fresh water from upstream blends with salt water closer to the bay forming brackish areas that flourish with nutrients and all sorts of marine life – post-larval shrimp to juvenile speckled trout. Spartina (cord grass), live oysters, and even mud, provide crucial habitat that could be termed basically as the heartbeat of our entire bay system. There is a delicate balance that must be maintained to ensure new life is breathed continuously into the ecosystem. During prolonged periods of excessive fresh inflow the balance is disrupted. Over the last six years or so we have been walking a tightrope when it comes to habitat and salinity. I often feel that if we or Mother Nature makes a false step we will lose our balance and fall…and there is no safety net. This pretty much happened during the August 2017 with the floods created by Hurricane Harvey.

When excessive fresh water occupies areas that are otherwise brackish, cycles that are normally predictable get altered. For instance, if tiny brown shrimp are way up in the rivers and marshes and we get a flush of fresh water from upstream, those shrimp will then push out into the bay ahead of schedule. And they will be followed by small specks from the same areas. They are mainly undersized because they came out before they were supposed to. The timing of the normal (there’s that word again) cycle has been disrupted and barring any significant changes, timing of most things down the chain will be altered as well.

May and June along the Upper Texas Coast also happens to be when we typically see our first major trout spawn of the year. Survival rate of newly-spawned eggs and, subsequently, larvae, is a point of concern in lower salinity environments. Studies have shown that survival rates are best when salinities are 15 ppt or higher. As of the time of this article more than half of Galveston Bay is averaging less than 7 ppt.

The limit reduction on spotted seatrout on the Upper Texas Coast that went into effect on September 1, 2019 was a step in the right direction and will certainly have long term benefits, but we still have to take a commonsense approach to how we enjoy our fishing. If we don’t need trout then we should practice catch and release. Dead fish pictures are out of style these days anyway. Also, there still needs to be more habitat restoration, especially with regards to planting substrate for new oyster growth. A limited entry and buy-back program for saltwater fishing guide licenses probably deserves some serious attention. Such programs have already proved successful in commercial shrimping and other seafood industries…so it’s not like we’re just now inventing the wheel here. These are just a few of the short list items that I believe we can address to make an even more positive long-term impact on all of our bay systems along the Texas Coast.

With all of the stay at home advisories over the past few months, many people are self-quarantining in their bay houses where they can just lower their boat out of the sling and go fishing. I certainly can’t blame them. I would do the same thing if I were in their position. In addition, we have a young generation of anglers just now coming of age.  With fast boats rigged with state-of-the-art electronics, cell phone and social media networking, our trout fishery is at a greater disadvantage than we’ve ever seen. With the crowds and fewer areas to catch fish due to fresh water issues (at the time of this writing) what do we need to do so we’re not fishing on top of one another?  Furthermore, there’s a ton of additional pressure being put on our resource.

Well, we can’t control the amount of rainfall along the Trinity River watershed and we’re not going to stop doing what we love, so how do we cope with what seems to be an issue that’s not going away anytime soon? My guess is that our tolerance and our overall behavioral patterns while on the water will have to change. Those of us who have really never had to worry about having company in areas we’ve enjoyed fishing for years will have to get used to such areas being occupied by someone else. That is unless we want to leave the dock at 4:00 AM. I’m not raising my hand for that one. The other option is to simply fish other areas even if they may be less productive. This has been my choice. I have found that some of our larger trout hang out in some of these less-occupied areas even though the quantity of trout may be fewer.

I honestly don’t think things will remain this way forever. I believe at some point, and I pray it’s very soon, our bay-wide salinities will stabilize and maintain an acceptable level for longer periods of time. This will have a two-pronged positive effect: 1 – Trout will be able to stay in our system for longer periods of time thus enabling a more natural cycle to take place. This will ultimately result in more fish and better quality. 2 – Anglers will be able to spread out and successfully fish other parts of the complex without having to fight over fishing spots.

In the meantime, it’s our responsibility to set a good example for new generations of saltwater anglers coming up through the ranks. Hopefully, we can convince most other fishermen of the importance of good stewardship of our resources and good etiquette while on the water. Who knows, the rate we’re going we all may be virtual fishing before long so it won’t even matter.  #jokingofcourse.