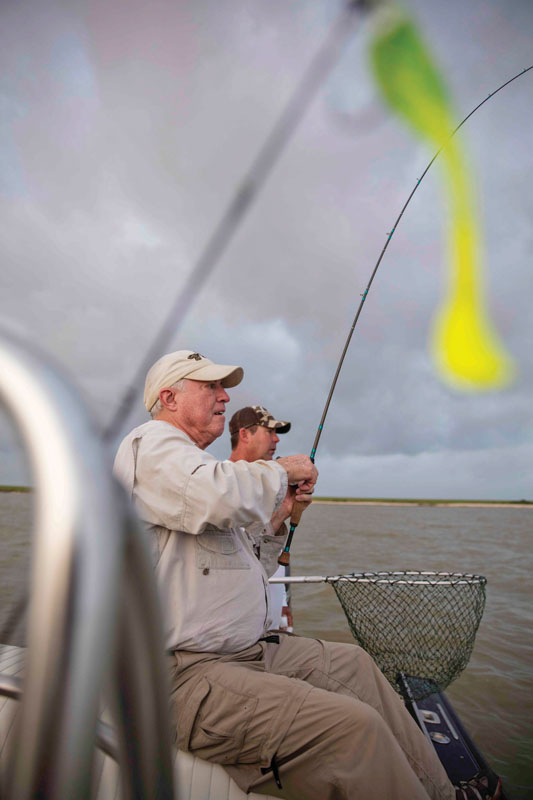 Crossing the bay, I was certain the howling northeast wind would result in at least two of my three clients needing to see either a dentist or chiropractor as we made our 15-mile trek. The 20-mph wind colliding with swift incoming tide created a chop in which the lid of my Engle cooler provided little comfort for their rear ends. Once safe haven was found on the north shoreline, the northeast breeze felt like an early-fall morning.

Preparing for his first cast of the day, one of the clients asked; "Man, this feels nice. I'll bet you're dreading those scorching July days ahead. What do you do when the heat sets in?"

"We go fishing," I replied. "Bring it on–hotter the better–I can't wait!"

Strong wind through much of May and early-June caused concentrations of boats reminiscent of a crowded parking lot as everyone sought refuge. Parking lots are not my thing even though I have to tolerate them on Christmas Eve when I do my shopping. Furthermore, most parking spaces these days seem to be designed more for smart cars. Last minute shoppers fighting over tight spots create a scenario that elicits negative mood swings and high stress. Sound familiar? Anyone who fishes Galveston Bay especially after two years of heavy rain concentrating fish (and fishermen) knows exactly what I mean. I've heard way too many stories of on-the-water confrontations this year.

July typically produces many long and steamy days on the water. But, there are plenty of ways to beat the heat. Wear moisture wicking clothing such as Denali shirts which also provide cool comfort and protection from UVA and UBV rays. Drink plenty of water and something with electrolytes. Stop fishing and crank up the boat to ride around for a while if someone on your boat is getting uncomfortably hot. Frog Toggs offers a cooling towel called a Chilly Pad that works great too. There are countless designs of caps, hats, gloves and face masks available for additional skin protection and comfort.

Historically, rainfall amounts and stiff winds decrease as the summer mercury rises. Assuming this pattern develops, calm days will allow fresh and salt water to stratify thus resulting in more fishable areas. Over time, heat and breezy afternoons will increase evaporation creating higher bay-wide salinities, which will enable anglers to utilize even more of the bay system to catch fish. On-the-water tempers will ease and anglers will learn to love one another again.

Temperature changes lend themselves to changing trout patterns which require different strategies for success. With water temperatures often in the mid-eighties, dissolved oxygen levels on the surface will decrease causing trout to seek deeper and cooler water to maintain comfort. "Deep" is a relative term based upon bay system, but it usually means 7 to 11 feet here on Galveston Bay. Such areas include old well pads, jetties, mud humps, deep oyster reefs, deep flats in open water, the Houston Ship Channel, shorelines with steep drop-offs and near passes where cooler gulf water flows. Deeper areas to target along other parts of the Texas Coast such as the Lower Laguna would include deep guts and drop-offs along the ICW and jetties.

The number one way for locating deep-water fish in this area is finding slicks and then setting up a drift while positioning the boat within casting distance of the slick's origin. Size matters when analyzing slicks. Smaller is better. We refer to ones the size of hula hoop as "fresh" or "new" signifying that the fish are very close. It reminds me of a game we played as kids where we searched for a hidden object while a friend would let us know when we were in the vicinity of the hidden object by saying, "You're getting warmer." "You're getting hot," meant you were even closer and when you heard "You're on fire," you were about to hit pay dirt. In other words, if you're 20 yards from a slick the size of a football field then you're stone cold. Large slicks are old and the fish could be 200 yards upwind or up-current. The objective in your pursuit of deep water schools is to always get warmer instead of colder.

Summertime trout are generally concentrated along the edges of bottom structure. If we're fishing a well pad or other deep-water structure we'll typically start out on the down current side. It's my theory that trout stage on the deep side to intercept forage species carried over the top by current. I have also experienced the opposite where bait and subsequently trout are congregated on the front edge leading up to the crest but this was usually during weaker tide situations. In either case, anchoring within casting distance of the school is usually the best plan once the fish are located. The majority of the trout we catch in such areas are what we refer to as tide-runners and typically average 15 to 20 inches. Every once in a while a 25-plus speck will be brought to the boat, but it's not a regular occurrence.

Soft plastics are employed most of the time, but topwaters can certainly dial up their fair share of trout, even in 10 feet of water. If I see bait on the surface and conditions allow, you can bet I'll tie on a surface plug. Catching trout out in the middle of the bay on top is a hoot! If there is a reasonably dense layer of freshwater on the surface, a dark-colored worm fished deep would most likely yield better results. Paddle-tail style baits such as Salt Water Assassin Sea Shads and MirrOlure Soft Shads tend to work better in the off-colored water as well because of the vibration they create. Jighead size matters as well. In weak current situations a 1/4 or even 1/8 ounce will work. A 3/8 ounce may be necessary in a swift current while anchored. Three-quarter and 1-ounce silver spoons work great in slack tide situations and bright sunlight. I've seen trout and reds strike spoons during off-feeding periods when no other bait could trick them.

With all of this being said, we're making the assumption that we are in for a dry and hot summer. If the opposite takes place then shallow reefs, shorelines and grass potholes could continue to produce solid results for a while longer. I'm not saying that we can't still catch fish in deep water, but simply stating other possible scenarios. Wind and rain decrease surface water temperatures and will result in higher dissolved oxygen levels causing fish to temporarily move shallower.

I saw this happen in July of 2007 following a heavy rainfall event. My good friend Mike Kalil called me in May to book a July trip noting he wanted to wade and catch his fish on topwaters. I told him that normally for the time of year he was booking that staying in the fiberglass would most likely be a better option. He said it didn't matter if he only caught one fish, but he was adamant in his request. On July 22, 2007 we waded a stretch of shoreline out in front of a bayou drain catching all we could handle on MirrOlure Top Dogs and She Dogs during a period that normally would have found us drifting in 8 - 10 feet of water throwing soft plastics on heavy jig heads. Our good fortune was enhanced by the fact that the marsh lake behind us had been flooded, concentrating hordes of bait on the bay side of the drain. Closely monitoring the effects of weather-induced changes resulted in our group having a career day.

Whether the heart of summer greets us with more El Nino-like deluges or La Nina's dryness, one thing is certain; it will be hot. I'm personally praying for the latter even though temperatures will flare. Because then maybe, just maybe, tempers won't. Have fun. Respect our fishery and be respectful of others.