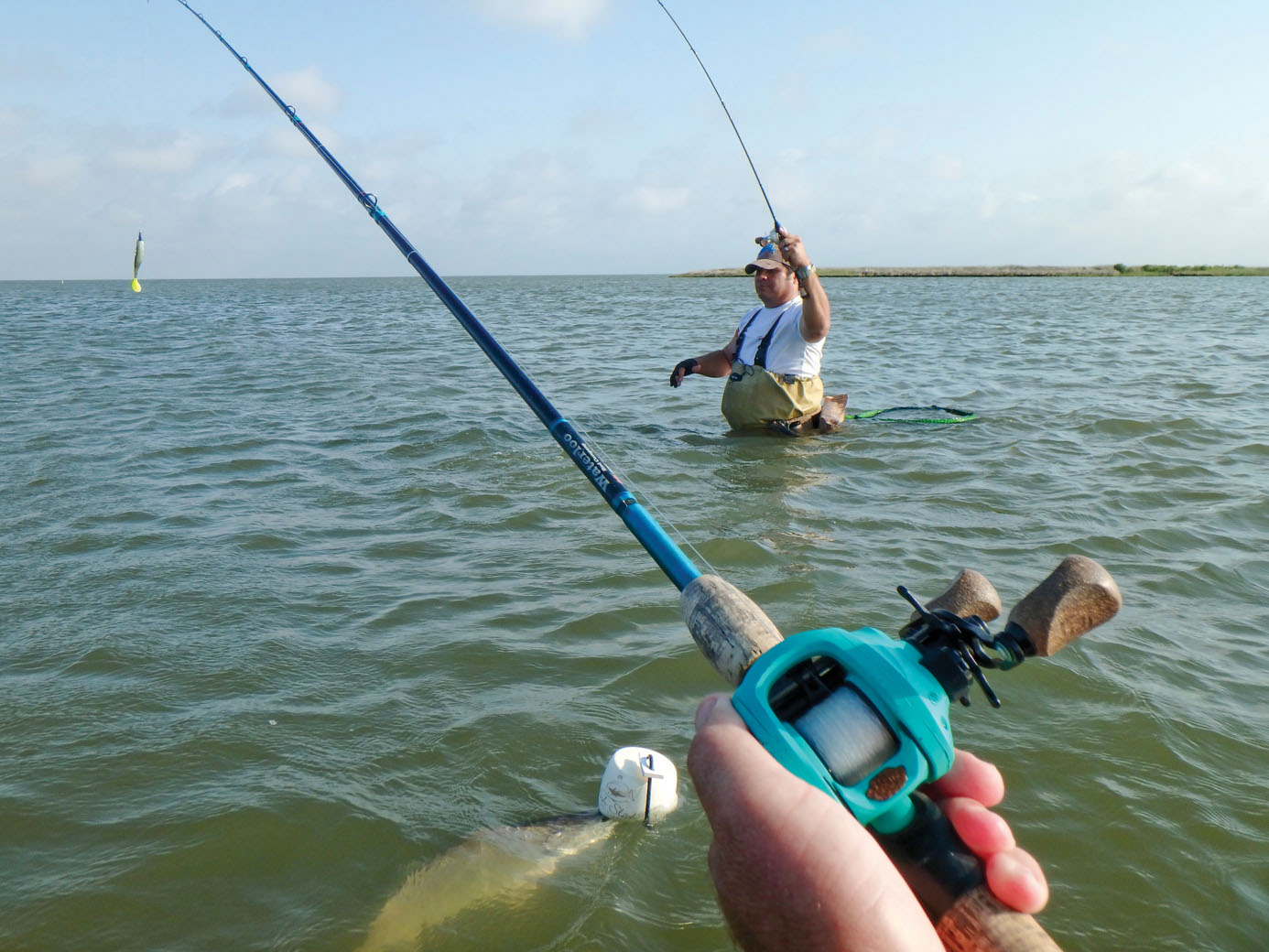 Not another boat in sight when a small craft advisory is in effect.  (Notice the slick in the background).

I occasionally receive calls from prospective clients wanting to use live bait. After explaining my style of fishing, some remain adamant and I refer them to a guide who specializes in this. Sometimes, trying lures piques their interest and their willingness to learn leads them to go ahead and book with me. I suppose there was a time when folks fished for food, but these days the thrill of speckled trout trickery is more gratifying than a freezer full of fillets.

I have nothing against using bait. I think most everybody started that way. I even ran some bait trips when I first began my guiding career as it was next to impossible to get artificial-only clients upon start-up. Thankfully, within a couple of years I was able to earn enough trust to acquire a steady lure-only clientele.

For the record, my decision to employ the use of lures over natural bait has zero to do with ego or anything like that. I chose my specialization for the same reasons I prefer archery versus hunting with a rifle. The challenge of archery simply provides me more excitement and satisfaction.

Over the years, catching trout on lures has honestly become less challenging for me, personally. Of course, there are days when I have to eat those words but, for the most part, finding and catching fish isn’t all that complicated. Believe it or not, stubborn trout days are some of my favorites. I may not have much patience on dry land but the clock means very little to me on the water. Instant gratification doesn’t sound very appealing to me when it comes to fishing.After all, what would we learn if it was always easy?

It would be easy to simply get in line on one of the “community” reefs and take turns with all the other boats catching fish, but the only challenge it would offer would involve navigating an obstacle course of fiberglass. I would rather find a secluded reef or shoreline and catch nothing. However, if you know what to look for, the catching part usually takes care of itself.

It’s usually not that difficult to find other areas holding enough fish to make it worth your time. You may not catch a limit in four drifts, like the guys stacked like cordwood on the reefs but, I promise you will become more analytical in your approach and become more connected to your surroundings.

The age old saying that 20-percent of the fishermen catch 80-percent of the fish indeed carries some merit. The reason for this is because those 20-percent have done their homework. They know how to read the water and they understand the trout patterns for their area. The 20-percenters didn’t just roll out of bed one morning with a vast expanse of fishing knowledge. They’ve spent many hours on the water knowing they would occasionally fail. They tried techniques others wouldn’t and they fished in conditions others wouldn’t dare. They challenged themselves.

There is a line we cannot cross with customers, such as when conditions become extremely unfavorable or even dangerous. Such was the case recently when I had a group of clients who wanted to drift rather than wade. While drift-fishing Galveston Bay is extremely effective during summer, it’s not effective when the wind cranks to 25 knots. After rescheduling I decided to call a buddy who recently retired from the United States Army to see if he wanted to hit some wading spots. He loves fishing but 22 years in the Army that included 14 tours in Afghanistan, Iraq and other places around the globe didn’t afford him many opportunities. After crossing a brief stretch of very sporty water we were able to run the shoreline until we found a bayou drain with beautiful hard-edged slicks emerging.

We worked the area from the bayside all the way up the bayou but landed only a few trout despite having received many short strikes. We were about an hour past a pre-dawn major feed which I’m sure had everything to do with the subtle strikes. Eric managed to stick a beautiful flounder before we decided to try another area. As we were climbing back into my boat I told him that we may be in for a tough day. He just smiled and said, “Brother, I’m just glad to be out here. This is awesome!” His appreciation for fishing and his no fear of failure attitude is something I would love to see out of more folks. Just saying.

Over the next 3 or 4 hours we jumped out at several other areas catching a few small trout and drum.The hours flew by as we talked about growing up playing baseball together, our kids, and to a lesser extent, fishing. A minor feeding period was approaching and I wanted to hit one more spot before calling it a day. I hadn’t caught much this year in this particular spot but figured they were due to show up any day based upon the rising water temperatures and the amount of tide-runner trout entering the bay from the Gulf.

We waded the leeward side of this cove first with no luck. I decided to shuffle across to the windward side where a gut runs parallel to the bank. This slight gut was holding a streak of greenish water bordered by murky. Trout were missing my MirrOlure She Dog so I switched to a Strike Pro Hunchback that runs just beneath the surface. When I began sticking a couple really solid fish I called Eric over to join the fun.

I wish we’d had somebody videoing as nearly every trout put on tarpon-like aerial displays. We stood in one spot catching dozens of trout to 24-inches before heading home extremely satisfied, despite the adverse conditions. It helped that I could feel every bite, even in gale force winds, thanks to the sensitivity of my Waterloo UltraMag rod. Eric was using his Concept C reel and I was using my Concept TX Edition. The exceptional casting distance of these reels enabled us to cast beyond the gut which made all the difference in the world. Just like when Eric and I used to pitch in high school, our gear gave us all the run support we needed.

Forget about what you hear or read about fish showing up on certain holidays or other specific calendar dates. Instead, monitor water temperatures and salinities. Know what’s happening upstream to determine what’s going on downstream. This year has been a perfect example of trout showing in places before they’re supposed to, due mainly to a very mild winter. Avoid “community spots” by fishing areas you think the fish should be using based upon all of the influencing factors, including boat traffic.

When everyone else heads for protected waters, try finding high-percentage areas along windward shorelines. Avoid the “Who Wants to Be a Millionaire” syndrome by NOT “phoning a friend.” Be a problem solver and figure it out on your own. There are high achievers in every profession. Passionate anglers who possess greater work ethic and are willing to take chances usually excel above others and are able to take greater pride in their accomplishments while remaining humble at the same time.

Forcing yourself to be challenged and willing to fail occasionally will open up a whole new world. A world where “average” doesn’t exist.