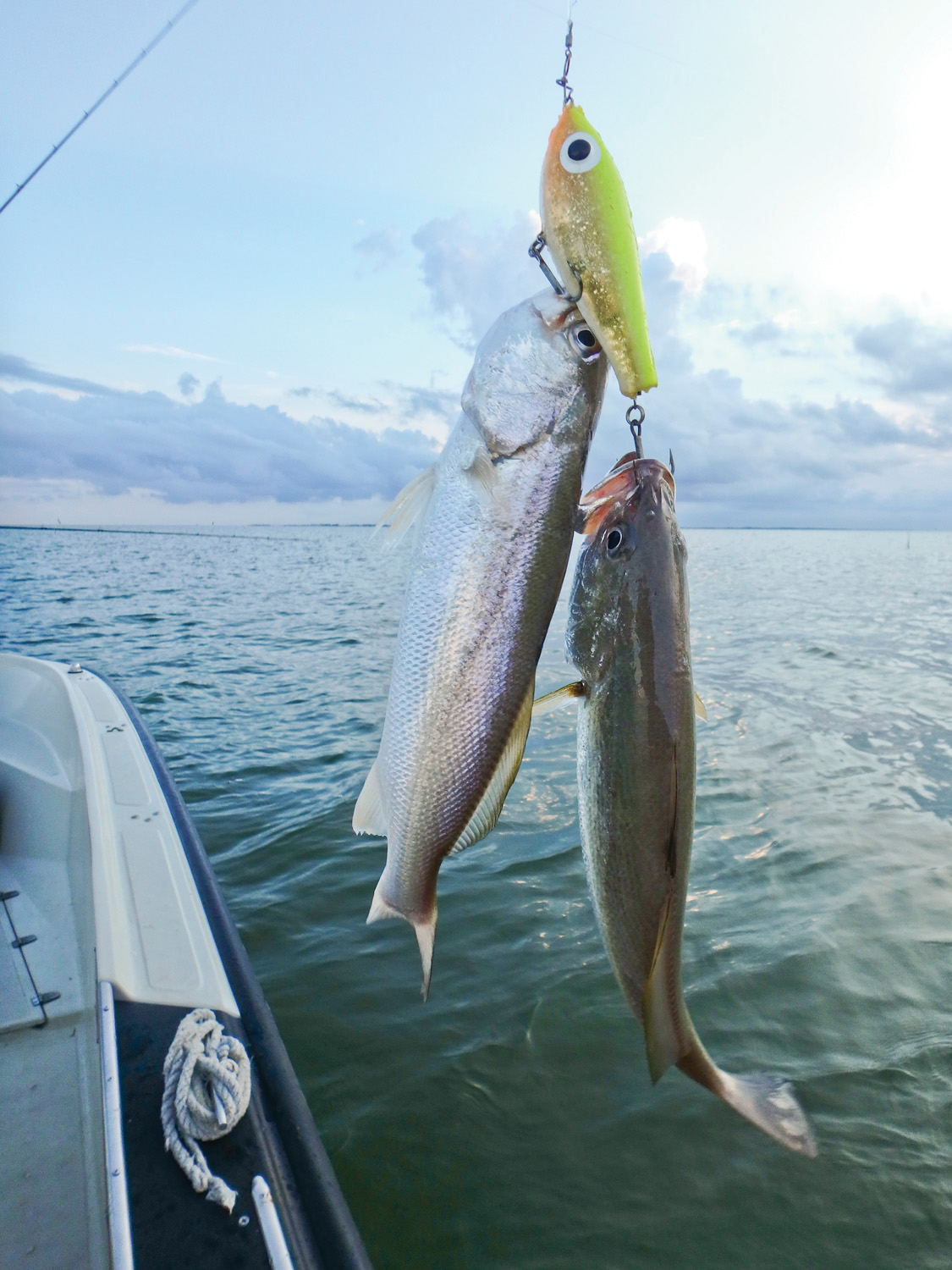 Not exactly a tandem-hook leader rig with cut bait…but the same result!

It was a chilly December morning when we dropped Grandpa’s small v-bottom aluminum boat in at the Galveston Yacht Basin. Armed with a pound of dead shrimp we made the short run down the Galveston Channel to Todd’s Shipyard. Our target species was gulf trout or at least that’s what Grandpa called them. They could’ve been sand trout for I knew. At 6-years-old it wasn’t important to me. All I knew was that I was fishing and I was with my Grandpa and those two things made me happy. “We need to peel the shrimp first Stevie. That’s how they like ‘em.” I don’t think we ever used more than two or three shrimp because the first two trout became cut bait and the rest is history. We could catch 8 or 10 trout on cut sand (or gulf) trout before having to rebait our double-hook leaders. Catching gulf trout two at a time with my Uncle Bobby and Grandpa Wiley was a thrilling experience for me.

Not everyone on my mother’s side of the family was as enamored of the softer-fleshed variety of trout. Uncle Bill liked to free-line live shrimp at the jetties for specks and reds, but he dabbled in a few sand trout excursions as well. My dad’s side of the family was almost exclusively focused on tricking speckled trout using lures. Pawpaw, my Uncle BB and, of course, my dad, helped me discover a whole new aspect of fishing, especially during my early teens. There was nothing better to break the solitude of a calm early morning wade than by having a trout explode on my Jumping Minnow as I walked it along the edge of rafting mullet. So many images are burned into my brain. I remember dad and me pulling up to a mud flat near the ship channel one morning. It was slick-calm and you could smell trout in the pre-dawn air. I slung my Kelley Wigglers shrimp tail (glow with a hot pink-dipped tail on a fluorescent orange 3/8-ounce jig head) out as far as my Ambassador 5000C would allow. The instant my lure pierced the surface a 4-pound trout went airborne trying to free my gumball-rigged plastic from her mouth. That high-flying trout with her gills flared open against the purple and orange horizon would make for a perfect painting on my office wall. I have hundreds of memories such as this one and each one seems to flow into the next.

These fine Christian men knew the importance of family and making sure the kids in their lives got to experience the important things, like fishing. They fought for our country, worked hard to provide for their families and always put others first. They were givers, not takers. The one common element regardless of target species or the style in which they chose to pursue them was the level of class and integrity these men effortlessly demonstrated. They used our time together as teaching and bonding time. Selfless and humble were traits by which they lived. Life seemed so simple back then but then it could be just because I was young and that’s how I choose to remember it. Either way, it was special and those experiences provided a solid stepping stone for me.

So Much has Changed

Each individual is in search of something different to satisfy their angling desires. While targeting big trout is by far my own preference, most folks seem to want lots of bites over quality. I’m not sure it makes a difference as long as we do what makes us happy and do it in a responsible way while respecting others. I do, however, have my own opinion on a few characteristics a fisherman should possess regardless of species targeted or methods used.

A recent trip found us drifting a deep ledge lined with jagged oyster shell after a late-winter cold front. It was a somewhat slow bite but the trout were very solid with most in the 3- to 4-pound range. The bite had been relatively slow bay-wide for several days but I had managed to luck into this pretty good patch of fish during that time period. As always, I kept quiet about my find but there’s one thing that will inevitably occur when other anglers are struggling…they will eventually find you and you’ll be toast.

Unfortunately, one boat idling nearby (first boat I’d seen in three days) saw one of my customers catch a nice trout. He motored about 30-yards in front of us through that drift and then quickly lined up very close behind us for the next one. We then watched them box a trout very similar to the 6-pounder we had just released. Before long, two more boats (both guides) got in line behind the one already tailing us. Since I can’t handle the carousel style of fishing very well it was time to leave. My frustration level with the entire situation increased greatly when I perused a well-known social media site that evening and noticed that one of the “guides” who had drifted behind us that day bragging about the solid trout he had found. He went on to say, “I thought there weren’t any fish left in the bay.” This was an intentional slap in the face to those of us who have openly expressed concerns about the health of our trout fishery and habitat issues here on Galveston Bay.

What made matters worse is that they were intentionally killing similar-sized trout (maybe even some of the same ones) that we were releasing right in front of them. I’ve said it before but I guess I’ll say it once more - How in the hell are we supposed to grow legitimate trophy trout when we continuously kill 5 and 6-pounders on purpose? The problem will continue to worsen as warmer weather arrives in the coming months and more internet meat-hauling heroes begin to splash their boats for the first time all year.

If you answered “B” for any of the questions listed above, you’re well on your way to possessing solid character traits (my opinion) such as leadership, integrity, humbleness, responsibility, respectfulness and resourcefulness to name a few.

There aren’t many secrets anymore and there are more pairs of eyes on the water and behind computer monitors than ever. I’ve reached a level of acceptance that’s just enough for me to maintain my sanity. The word tolerance also comes to mind. Quite frankly, the drama and boasting on social media is an embarrassment. Grown men shouldn’t act like children unless they want to be treated as such.

Furthermore, the networking and the lack of etiquette on the water sickens me. My solution has been to avoid speaking with some of the other guides and “unfollowing” certain people on social media sites. In addition, I only post general updates on my website and my social media page about every three or four months. It’s been nice to go back to the “old school” days where I don’t have to look over my shoulder while I’m fishing because no one has heard from me in a while.

My customers and I enjoy not having to fish amongst the crowds and I will continue to do everything in my power to keep it that way. I wrote an article for this magazine back in August 2016 that I titled “The Quiet Man.” It’s based on my real-life encounters with certain unnamed fishermen who exhibited positive character traits we should all strive to emulate. You should give it a read. In the meantime, I’ll continue to try to do right by the ones who started me on what I consider the right path many years ago.