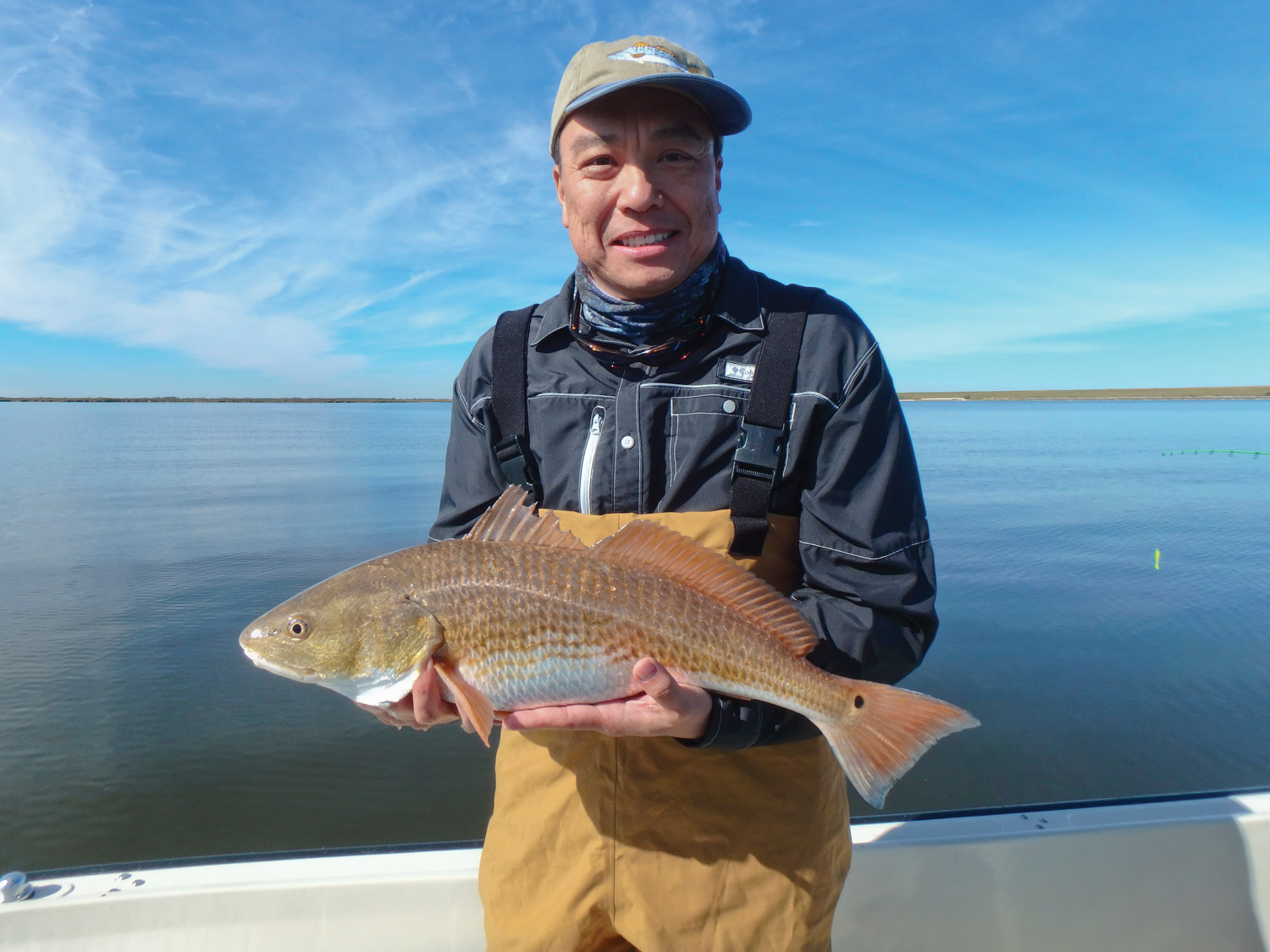 Jonathan Hsu with one of many fish he caught in 8 feet of water on a chilly high pressure morning.

Well, it’s becoming evident that we’re finally having a winter here on the Texas Coast.In the wee hours of the morning on December 8, sleet and snow began to fall. Around 1:30 AM I woke my daughter and wife for the spectacularly rare sight as the mixed precipitation had turned into very large snowflakes. By 6:00 AM we witnessed 2-inches of accumulation. The postcard-like view from our back patio as the sun rose seemed to bring a bit of cheer that I think we all needed.

The next day I hit the water with hopes of fooling a few trout and reds in water that had plummeted to 45.5⁰ F. Not surprisingly, we found air-clear water and zero signs of bait activity. It was pretty much what I expected, given the circumstances. The surface water temperature just a couple of days prior was around 67⁰ F.So many changes occurring in such a short amount of time had me a bit concerned but I had a pretty good idea of how the fish would respond. Our fish had gorged the day before when the front hit. Water temperatures dropped very quickly and the water clarity went from one foot to three feet visibility. The colder water paired with less sunlight over time causes the algae/plankton to die, resulting in fewer suspended organic particles in the water column. We experience this every year and it can present a challenge for those who choose to use artificial baits exclusively.

During mild winters such as the past couple of years, we typically find ourselves frequenting semi-shallow water near deep areas as fish instinctively descend when major cold weather events occur. So far this winter season, I’ve spent more time in deeper water. It’s not always the actual temperature of the water that drives the trout deep but how quickly it drops. Cold-stunned trout can become tough customers, especially with all of the other factors mentioned. However, there are tactics to employ to increase success and some of those tactics may involve avoiding certain areas altogether.

Finding deep pockets in gin-clear water can enable you to trick fish that you would otherwise likely spook on shallow flats. Before someone reading this says, “Well, I’ve caught plenty of fish in shallow, clear water,” keep in mind that I’m referring to extreme conditions involving drastic temperature and barometric pressure changes for purposes of this article. In addition, I’m not inferring that trout aren’t occupying certain skinny water areas but that they simply may be rather difficult to catch. There are always exceptions, but I typically avoid the skinny stuff during “extreme” conditions.

During a recent one week stretch we witnessed changes in locations and behavioral patterns of trout as the result of a strong frontal system. This one week snapshot can be viewed as a textbook example of what to expect under similar circumstances. Two days prior to the front found us drifting over scattered shell in 3- to 5-feet of water. Pre-front, the water temperature hovered in the mid-50s and the clarity/visibility was roughly 18-inches. A moderate southwest wind helped keep the water just murky enough to allow us to get within casting distance of these fish without spooking them. Long drifts chunking various soft plastics to the occasional flipping mullet yielded great results. The cold front hit late that night bringing wind gusts to 35 mph out of the northwest. After cancelling the next day, I was back on the water 48 hours later amid near calm conditions and gin-clear water. The water level was at least two feet below normal and the surface temperature had fallen to 46⁰F. The barometric pressure was 1015 millibars prior to the front. It was now up to 1030!

After a chilly boat ride my clients and I arrived at the area where I had been just two days prior. The mirror-like shallow flats under the early morning cobalt-blue sky would’ve made for a majestic watercolor painting but Creighton, Jonathan and Hank brought fishing rods, not paint brushes. The area was void of life and the water was so clear and low I don’t think we could’ve gotten close enough to catch them even if they were there. There were numerous deep holes and troughs not far from the flat that was so productive before the front and the low tide had concentrated even more fish into deep holes than usual. This is where we made our day.

Of the 30-or-so fish (trout and reds) caught, the majority of them came on MirrOlure Soft Shads and Saltwater Assassin Sea Shads, rigged on 1/8-ounce jigheads in 7- to 10-feet of water. There wasn’t much current to speak of. Had there been, we would have tied on 1/4-ounce heads to compensate. My guess is there was a thermocline layer about two feet off of the bottom because of where our bites came from. We used a bass worm technique which involved letting our plastics sink to the bottom, followed by a slow sweeping up-and-down retrieve. As they often do, the subtle bites came on the fall. Our best bite was near the end of the morning solunar major around 7:30 AM, the day of last-quarter moon.

My clients and I continued a very successful stretch applying the same strategy for weeks as cold fronts became more and more frequent. Other than during extreme warming periods, quantities of fish continued to hold in the deeper areas. The cloudy and foggy days yielded the best results. I credit this to the clear water and lower barometric pressure generally associated with overcast skies. Bites were certainly more aggressive in the damp air.

There have been days when we’ve experienced a steady bite all day, but this is the exception rather than the rule this time of year. Most days provide small windows of opportunity and you better be on your game because the feed won’t last forever. Having the right gear is even more important now compared to the warmer months.For example, my clients who are using the higher-modulus custom rods and lower-profile light-weight reels strung with quality braided line are having much more success than those who are using older and heavier model rods and reels. I use Seaguar Smackdown Tournament braid (6/20) on one of my Concept TX Edition reels and 10 pound Trilene XL Smooth Casting monofilament on the other. Using the smaller diameter line enables me to cast further which also increases my chances of catching skittish, clear-water fish. All of my personal reels and client reels rest atop custom Waterloo rods with my two primary sticks being an Ultra Mag and HP Lite. I always use a 20 pound fluorocarbon leader which is a game changer in clear water. There are several good brands out there but I prefer Seaguar.

In bright sunlight we use bright and clear colors such as limetreuse and salt-n-pepper. One bait that has also been a go-to for me is MirrOlure’s “chicken” which is a brighter version of other brand’s Chicken-On-A-Chain. It seems to contain more glitter and the fact that it’s scented helps fool more fish in clear water. I use paddle-tail versions of soft plastics almost exclusively in the conditions described above.The added vibration seems to provide yet another advantage.

I must say I am a bit surprised at how many fish we’ve caught early in the morning in bitterly cold conditions recently after the passage of major fronts. The reason, however, is fairly obvious when one considers the water clarity. Late evening would likely yield similar results due to the low-light conditions.Another factor that’s helping to produce great results is the fact that we’re fishing remote areas. Areas that experience heavy boat traffic can be a recipe for disaster when trying to catch fish in clear-water conditions. Quiet is better. That’s why I creep into and out of the areas we fish using the troll motor at about quarter throttle. Little things like this make a huge difference.

Remember to dress in layers, avoid the masses, and change with the changes. Don’t use cheap stuff, especially this time of year. Target deeper areas with structure or vegetation after big cold fronts. I hope we keep having them. I’m liking this!