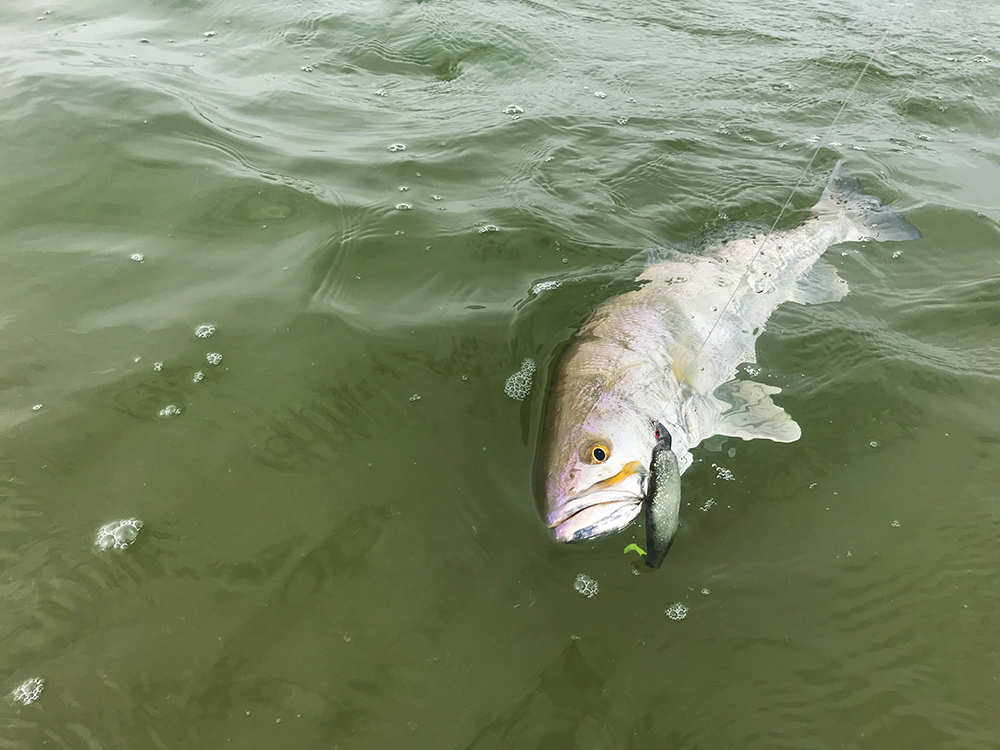 More than 40 trout like this were caught this day. A great example of return on investment in good fisheries management!

I just got home from the first of several Texas Parks and Wildlife public hearings regarding proposed changes to statewide saltwater fishing regulations. For me and many others, the proposed limit reduction from 10 to 5 spotted seatrout in Galveston Bay and Sabine Lake is of greatest interest. By the time you’re reading this a decision will have been made to either reduce the spotted seatrout limit to 5 along the Upper Texas Coast or remain status quo.

Getting back to the hearing, the attendance was less than I expected. The inclement weather may have had something to do with it. I also think that the fact it was announced to be a public hearing may have scared some potential attendees away. Public hearings are more structured than the scoping meetings we’ve attended in the past. The last scoping meeting I attended in January 2014 ended up becoming somewhat of a free-for-all with folks speaking out of turn and going way off topic.

Last night’s hearing (February 26, 2019) offered some similarities from the one I attended in 2014 in that there were a lot of assumptions made as to the reasons for the proposed regulation change and a fair number of speakers went off topic wasting quite a bit of their allotted three minutes at the microphone. In addition, there were many false “facts” spewed from the podium. Let’s discuss a few.

Guides are the ones responsible for the five trout limit proposal.

Okay. Guides are not the only ones who began the push for the limit reduction. Here is a quote from an email I received from a TPWD director back in August of 2016. “We aren’t proposing any changes to trout regulations at this time. There appears to be growing interest from some anglers to begin looking at a state-wide five fish bag limit for spotted seatrout.” You see, numbers of upper coast anglers have been pushing for a change for more than three years. This didn’t happen overnight and it wasn’t just guides. However, I am a guide and I do support a change.

Guides only want the limit reduced to five trout so their days will be shorter.

This assumption is not only baseless, it’s downright insulting. The majority of the guides with whom I associate are proud of their profession and thoroughly enjoy teaching clients the ins and outs of the sport. Time spent together on the water with our clients typically results in long-term friendships. In other words, we enjoy the company. Guides who do it the right way are not the ones who want to catch a quick limit and then haul butt back to the dock. I cannot imagine how any guides that do this would have many repeat customers. Just the other day my guys had quick limits of eating sized trout and reds. Did we come in early?  No sir! We waded for several hours catching and releasing quality trout. By the way, we were in Matagorda Bay where the trout limit is five. The real reason folks like me are in favor of a limit reduction is because we care not only about our livelihoods but the sustainability of our fishery. One can’t exist without the other. We want to see our bays and fisheries flourish, not diminish.

The guys wanting to go to five trout just don’t know where to go to catch trout. They have to adapt to the changes.

Some hotshot internet anglers and guides unfortunately mistake our concern for the fishery as ineptitude. They think that because we’re not putting all of our clients’ stringers together for a massive over-the-shoulder hero photo that we’re not catching anything. Don’t get me wrong. I’ve certainly done it once or twice a long time ago. However, you’ve got to grow up sooner or later and realize that setting an example for younger generations is more important than feeding your ego. Most of us older guides and a lot of the younger ones have in fact adapted to the changes. Otherwise, we wouldn’t be able to stay in business.

There is nothing wrong with our trout population. We have millions. Stop whining!

While TPWD Coastal Fisheries data does indeed indicate that spotted seatrout numbers are “stable” along the upper coast, is “stable” where we want to be? To me, “stable” is a term used to describe the condition of someone who’s in the hospital following a car crash. I want to experience a trout fishery that’s at its maximum potential with regards to quality and quantity, not one that’s wallowing in mediocrity. We have trout. No one is saying that we don’t. However, anyone who thinks that it’s anywhere close to what it used to be or what it should be is either too young to remember or in serious denial.

The decision to reduce the limit to five trout has already been made by TPWD. The hearings are only a formality.

I hear this all the time and it couldn’t be further from the truth. TPWD conducted a series of scoping meetings five years ago to gather feedback for a spotted seatrout limit reduction from ten to five, extending from ICW Marker 21 in the Lower Laguna to Sabine Lake. The proposal was met with strong opposition at the Galveston and Sabine meetings, resulting in the change only taking effect from Marker 21 to FM 457 at Sargent. TPWD does indeed listen.

There is less fishing pressure now than before.

The folks saying this could easily qualify for the Darwin Award. There were 894,144 licenses (combo plus fishing [excluding freshwater only licenses]) sold in 2008. In 2017 that number swelled to 1,179,002. These numbers do not include lifetime fishing licenses, resident July and August all-water or saltwater packages or one-day licenses.  So, in 10 years there was a 32% increase (284,858) in licenses sold. During that period of time guide license sales went from 1,095 to 1,333, which is a 22% increase. This number does not include paddle craft guide license sales. There was a slight decrease in license sales in 2018, attributable no doubt to the devastation and timing of Hurricane Harvey. Harvey made landfall as a Category 4 storm on August 25, 2017 near Rockport, then worked its way up the coast over the course of the next six days causing unprecedented flooding. Not only did Harvey come during annual license renewal time but thousands of people were displaced from their homes for months and even more than a year in many cases. Despite the timing and devastation, TPWD relevant license sales totaled 1,128,347 in 2018. Guide license sales for that year were 1,316. By the numbers, that’s almost one third more fishing pressure over the course of a decade.  (Source: 2008-2018 License Data – Zack Thomas, M.S., Human Dimensions Analyst, Policy and Education, TPWD Coastal Fisheries Division).

There is no evidence that reducing the limit to five trout will improve the quality or quantity of our catches.

False! There is a really informative section in this magazine called Texas Parks and Wildlife Field Notes. In the September 2018 issue, TPWD Lower Laguna Madre Ecosystem Leader, Jason Ferguson, put together a comprehensive article titled – 10 Years Later: A Review of the Impact of the 5-Fish Bag Limit for Spotted Seatrout in the Lower Laguna Madre. Since the typical life span of a speckled trout is around 10 years, the effects of the limit change can be fully realized in the entire population. Ferguson’s findings showed mean catch rates increased by 16% in the 10 years after the regulation change (2008-2017) compared to the 10 years prior (1998-2007). He noted that the increase was 5 times higher than the originally projected 3%. In addition to higher catch rates, the 10-year mean length increased from 18.2 (1998-2007) to 19 inches (2008-2017) which equates to a 4.4% average size increase. The most impressive statistic was the percentage of trout measuring longer than 25 inches. The average percentage for this size-class was a little over 10% of the total population prior to the change and increased to 15.6% in the 10 years following. That’s a 56% increase and considerably higher than the originally predicted 38% increase. Mr. Ferguson uses the word “robust” when describing the current population of trout in the LLM. That’s a word I could get used to using.

Galveston Bay has been dragged through the ringer during the past eleven years. She’s suffered major habitat loss in the form of oyster reefs buried in heavy layers of silt (Hurricane Ike), followed by five or six years of devastating drought, and then several more years of record-setting fresh water inflow.

In the fourth round came the knockout punch named Harvey when flood waters flushed countless numbers of precious trout from our bay system. She has recovered quickly and is going to be fine, but she could sure use our help to get to the next level. Just a few years of cooperation from Mother Nature and us doing our part by controlling what’s controllable, will enable us to enjoy an outstanding and maybe even world class fishery once again. Sign me up!