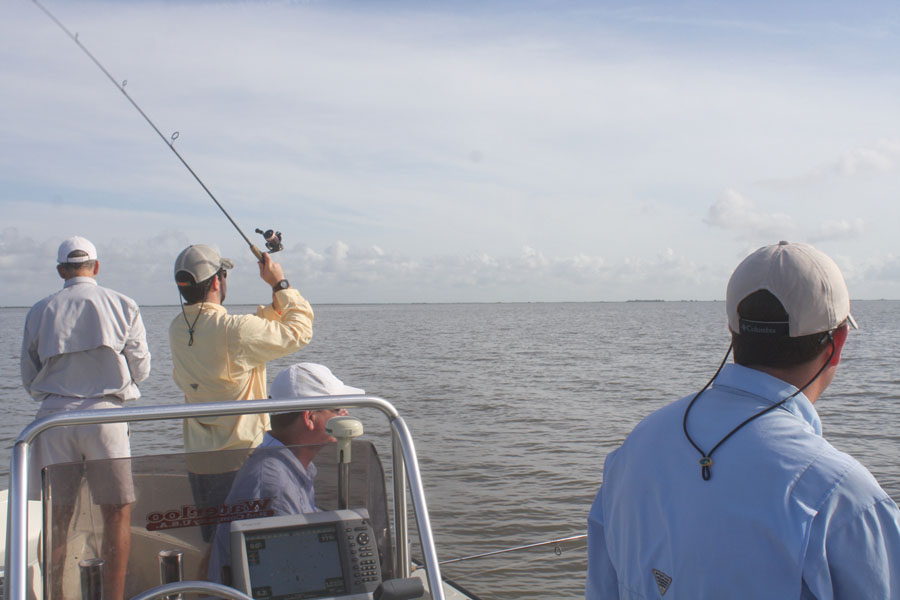 Plenty of elbow room and no crowd makes for happy clients (and captain)!
There is a laundry list of variables that help determine our success on the water; location, wind, tides, skill level, lure selection, boat traffic, etc. Up until just a few years ago boat traffic was near the bottom of that list. Nowadays, it has taken top consideration when choosing when and where to fish. I used to launch and go straight to where I knew I could put clients on trout. In recent years I find myself passing up fish to find less-crowded areas, fully aware of the risk involved. An astute fisherman who follows patterns and trout signs will put in hours on the water to locate trout. Generally, he is able to enjoy the rewards of his labor enough to justify the risk, even if it's only for a few days before the arrival of others who lack the patience and work ethic. At the onset it's not all that bad, but once they call their friends and their friends call theirs, it spreads like a cancer. We live in a world of ego-driven individuals seeking instant gratification and it has most certainly spilled over into the fishing world. As with any sport, pride and ethics should be personal attributes to behold.

As our bays continually become more crowded we must adapt to the changes or play more golf. The topic of over-crowded bays has been beaten to death in fishing circles especially by those of us who remember the good ol' days. Opinions of over-crowding vary among anglers depending on years of experience, the amount of time spent fishing and personality types. For some, 10 boats on a 300 yard stretch of shoreline may be acceptable. If I see two boats on that same stretch I'm going to continue on until we can find an area to work thoroughly without having to worry about getting in the way of others.

The same applies to drifting. Small reefs with dozens of boats milling around doesn't provide enough room to work the area effectively and sooner or later boats will get too close to one another. That's when tempers flare and the outcome is seldom positive. An inexperienced angler or one who doesn't get to fish much will likely follow fiberglass instead of fish. The overzealous Type A personalities will motor right into the middle of a group of boats so they can get their photo ops for Facebook. Everything I'm saying sounds negative, but unfortunately these are real issues we experience almost daily.

Over-crowding is not to be confused with over-fishing.  Simple thinking would lead one to believe that more boats on the water would lead to more trout harvested. Nine times out of ten though, the spectator boats have limited success because they don't have the knowledge of the area nor do they understand the behavioral patterns (i.e. feeding times, lure selection, presentation, etc.). Often times they're too busy punching in your location on their GPS to realize what's happening around them. Or, they're too occupied looking to see what you're catching to notice slicks emerging 50 feet off of their bow. There are little techniques like casting your Bass Assassin cross-current to get more strikes or a straight retrieve versus a traditional "pop, pop, fall" routine. The "where" is only a small part of the equation. None-the-less, too many boats in a small area can cause the fish to lock up and can cause side effects similar to some prescription drugs. The warning label would read… "Encounters with potlickers may contribute to a rise in blood pressure and shortness of breath. If symptoms persist, leave the area immediately, but not before humming a Super Spook into the side of their boat." OK—I'm obviously joking here.

So, what can we do to avoid crowds and still catch fish?

Don't be a Liver!

Aside from what we all learned in anatomy class, a liver is someone who falls in love with a certain spot because it's easy for them to catch fish there. They go there virtually every time they put their boat in the water and fish it until the fish are all gone or until they can no longer catch them. They should just put a mailbox on it because they live there. Living in one spot can be dangerous. Sooner or later that well will run dry. Moving around and utilizing the entire bay system that you fish has its benefits. By doing this you are less likely to draw attention to the spot and you'll have more back-up plans when conditions change. Have confidence that you will find other fish and follow the signs (slicks, active bait, etc.). Don't be afraid to fish in dirty water. "Trout green" usually isn't the only water holding trout. It's not smart to be a liver!

Inevitably, we will encounter potlickers from time to time. Regardless of the circumstances, sometimes it's better to just leave the area. Other times I feel like it's appropriate to offer some advice just in case your new friend is unaware of unwritten rules. It never ceases to amaze me how many folks just don't know. It could be that they've seen so many others do it that they believe it's OK. Here's a funny story from one of my recent trips. My clients and I were fishing a very small unmarked reef that I've been frequenting for the past few years with good success when two guys motor within 30 yards and throw their anchor. When we asked them what they thought they were doing they answered with probably the most comical reply I've ever heard. "We have sponsors!" I figured it was a lost cause so we just went elsewhere leaving them all alone in their 18 foot aluminum boat. I resisted asking who their sponsors might be. I'm not all that knowledgeable of the pyramid weight or double-drop orange-beaded leader manufacturers anyway. True story!

Take a Step Back

How many times can we all remember running 20 miles across the bay only to find several boats where we were all alone the day before? My inclination used to be to simply leave. Of course, a lot of it depends on the area. There are some large reefs in the Galveston Bay Complex that obviously have room for more than a couple of boats. In some cases, the other boats that arrived first will push fish to different parts of the reef. By keeping your distance (100 plus yards) while trolling the perimeters, signs such as slicks or nervous bait can lead you to the trout. I like to have at least one person on my boat throwing a high-pitch topwater when exploring another part of a reef. Rapala's Skitter Walk or MirrOlure's She Dog serve as great locator baits when using this approach.

The early bird doesn't always get the worm, especially when dealing with over-crowded areas. Many times we'll leave the marina at noon and fish until dark. This is a great plan not only during winter and spring months, but summer also. The trout tend to settle back down after being harassed all day. Late afternoon/evening wades can often produce above average quality trout this time of year as bait pulls up tight to shorelines.

When all else fails and cooperative trout cannot be found in your quest for less-crowded areas, just wait a while. Typically, more than half of the boats that were in the area in which you were catching fish before will be gone by 11 or 12 o'clock. It can make for a longer day, but that's just part of what we have to cope with these days. Observe what the tides are doing for that area while you're buying time elsewhere. Try to time your return just before a tide change. In most cases we'll get two good feeds over an 8 hour period this time of year.

Fishing is a fun sport and most who participate are great people. I truly believe that the "Bad Apple" idiom applies in most cases. However, I've come to the conclusion that things aren't going to change any time soon. As frustrating as things can get at times, I still have too much passion for fishing to quit. And besides, I kind of suck at golf.