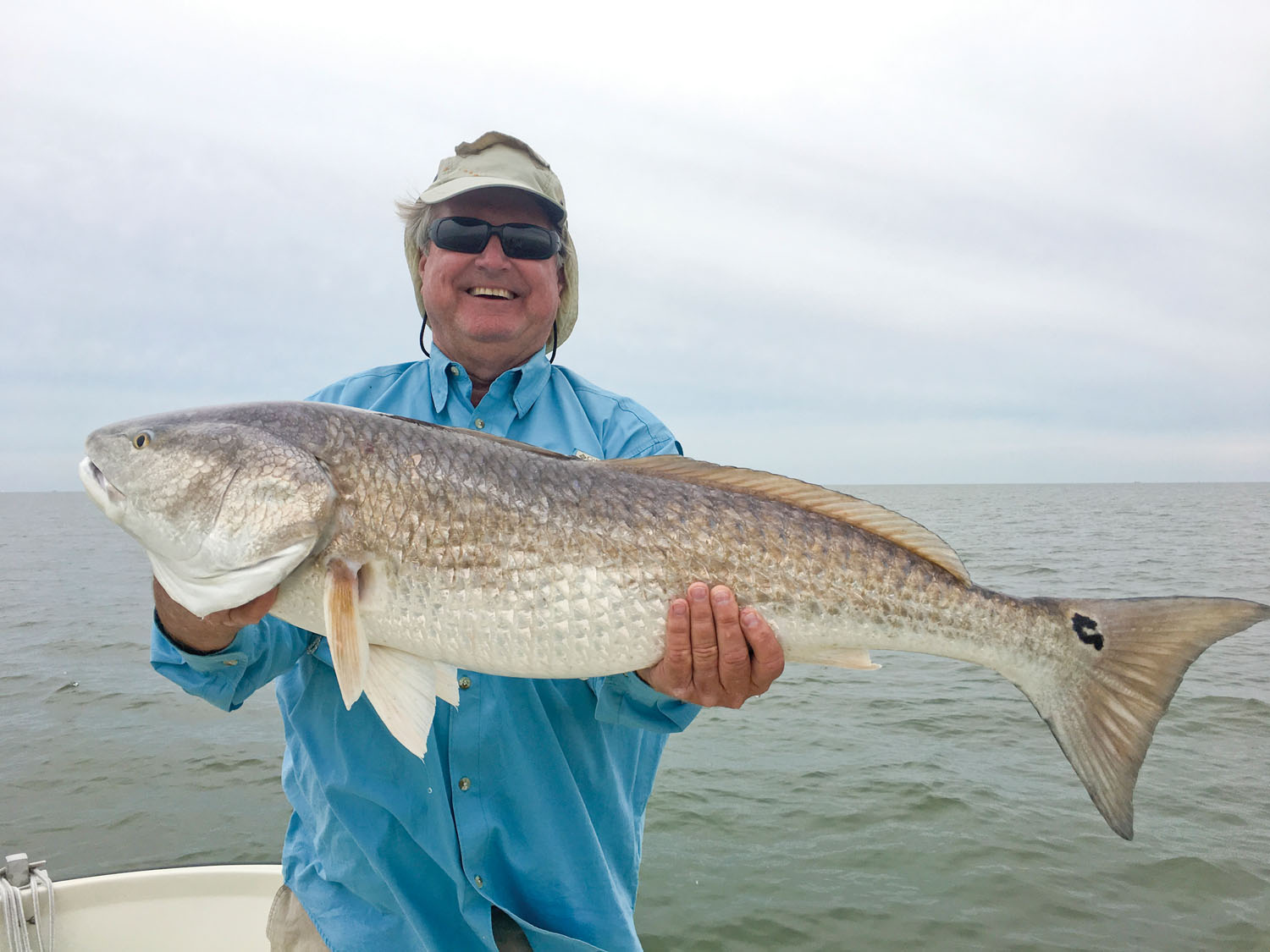 Steve Whitworth caught lots of nice trout on this day, but this giant red was icing on the cake!

Sitting in my homemade bow blind in South Texas I prayed for a buck of a lifetime to show himself. I had one on the game cam that would make any hunter proud to have on his wall. All my clothes, right down to my underwear, had been washed in scent-block detergent. I had gotten in plenty of practice back at the ranch house the day before so I had the confidence to make the shot. The wind was light from the north which was perfect for my set-up and I knew the yardage in every direction. If he was standing next to the short guajillo (gwa-he'yo) bush it would be a 15-yard shot. The mesquite with the broken limb across the clearing to my left would be a 32-yarder, but one I felt that I could make after hours of practice and years of bowhunting.

It was about 6:30 AM and still dark as I anxiously awaited that moment at first light when the birds start chirping and all of God's South Texas creatures come to life. In the pre-dawn minutes, a small bobcat walked up and sat down directly in front of me at about five yards. Without the slightest notion of my presence he perused the area then slipped off into the brush. Over the next couple of hours, I watched nearly a dozen deer come and go. Some were majestic young bucks that made my heart race before realizing that none of them were "The One." During the next three hours, I watched everything from a family of javelina to a terrified covey of blue quail hunkered down within three yards of my ground blind as a hawk swooped overhead. The mature buck I was after never came into view that morning. He could've been behind me or anywhere outside my field of vision for all I knew. Knowing that made the hunt that much more exhilarating.

When I returned to the ranch house my dad asked, "Well, how was it?" He perked with excitement when I told him that I'd had an awesome hunt. "Really? What did you get?"

"Nothing," I said. Then I walked him through every minute detail about my hunt and he agreed that it must have been pretty cool to witness. I've had the pleasure of experiencing many great hunts and witnessing some amazing things whether an arrow flew or not. What little time I get to spend at the ranch is cherished now more than ever. My perception of a good hunt or a good day of fishing has changed in recent years. Seeing others have success and enjoying themselves gives me more satisfaction than ever. Just like when I was sitting in the blind with my little girl last deer season and she got her first buck (a really nice 10 point). She and I hunted every day together for five days. It was the best hunt I've ever experienced and I never picked up a gun. Getting her first buck was really neat but the time we spent together in the blind is irreplaceable.

As I pondered ideas for this month's article several topics passed through my mind. I could layout strategies for catching wintertime trout or cover boat maintenance for those who may not fish again until spring. While such information could prove useful to those who are just getting into the saltwater realm my heart led me in another direction. Maybe it's because of the holidays and I see so many folks struggling with finances, family issues or health issues. It could also be the fact that a few of my close friends have recently lost family members. Or maybe it's simply because I'm getting older. I'm guessing it's all the above. The bottom line is things that used to matter to me just don't much anymore.

I look at how bent out of shape we seem to get on days when the fish don't cooperate, then I think of what really matters. I know. I know. This thought process is somewhat cliche. Well, it may be, but it's so very true. After all, it's just fishing, right?

We catch literally thousands of trout each year on my boat, but some of them mean more than others. It's not necessarily the fish that means more but rather the circumstances surrounding the entire experience. The excitement on a kid's face when he or she catches their first trout ever is very rewarding, especially when they did it all by themselves. The fact that they listened, followed instructions and learned is very rewarding for me. What's more special is the fact that their mom and dad were with them to make memories that will last forever.

I had a new client the other day who said he hadn't caught a speckled trout in twenty years. He told me that it was already a great trip after catching the first trout of the morning. Watching him catch trout all morning long gave me a great deal of satisfaction yet he was happy with merely one. By the way, having a client like this on the boat is every guide's dream. When folks get on my boat with that kind of attitude great things seem to happen.

Then there was the time I took a father and son on their last fishing trip together before the father was called to a higher place. To this day that was the highlight of my fishing career. From young first-timers to war veterans to clients with terminal cancer, I'm extremely blessed to have played a role in putting smiles on many faces knowing that a few of them didn't have much to smile about at the time.

So, where am I heading with all of this you might ask? I guess the message to all fishermen including myself is to relax and enjoy the days on the water you get to spend with friends and family. I see grown men lose their minds over speckled trout almost every day. I'm talking about the ones who motor right in on top of you or cut off your wade when they see bent rods. It's hard for me to imagine a speckled trout or any other fish for that matter being worth a confrontation.

It's a new year my fellow fishermen. Let's get it kicked off on a positive note. Internet fishing and phone fishing are not the right ways to learn. Make your own fishing report instead of following them. Selfishly cutting another boat off so you can get "your fish" is certainly not the right way to do things. A little common courtesy on the water can go a long way. Try to learn on your own and enjoy your day on the water regardless of results. By taking a step back and realizing that it's not only about you but those around, you'll begin to enjoy our beloved sport of fishing even more. It's time to head in a new direction, a concept that embraces more selflessness and less selfishness. It's time to fish the right way and for the right reasons.

Here's wishing each and every one of you whatever brings you happiness in this New Year.