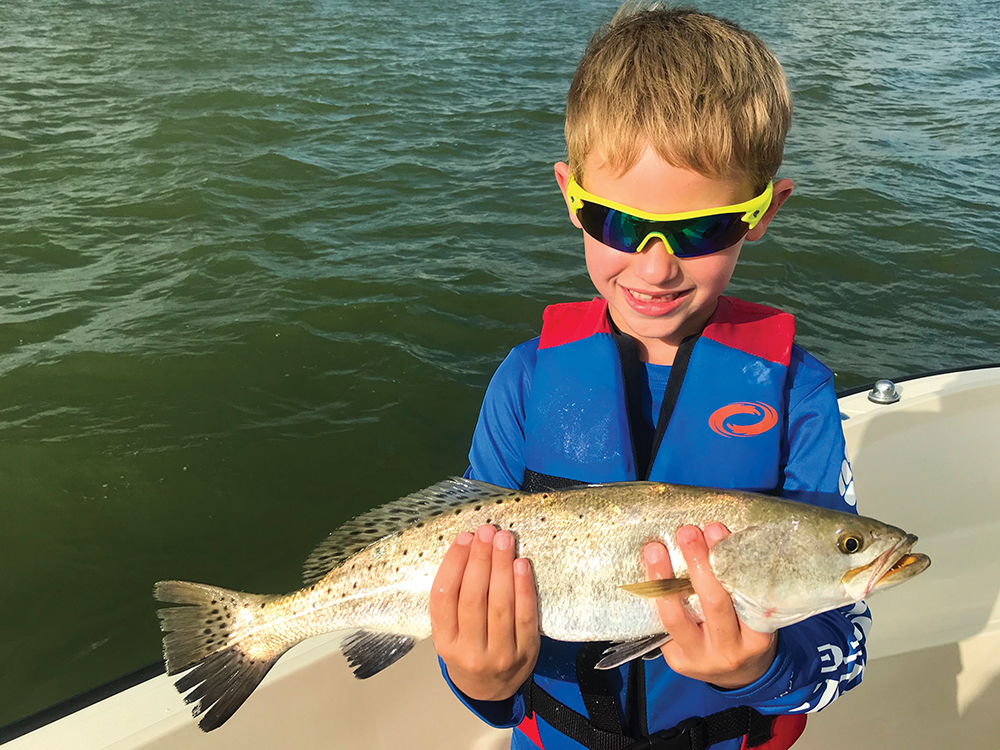 6-year-old Clay Dolch had a blast casting to slicks over shell in 7-feet of water while throwing Assassin Sea Shads. This pattern will still be relevant during the early part of October.

Fall is right around the corner and with it comes some welcome changes. Following the autumnal equinox which will occur this year on September 23, the days will start getting noticeably shorter and the nights longer. This coupled with cool fronts will result in dropping water temperatures which will send all species of fish into a giant feeding frenzy and it will be the craziest topwater action we’ve ever seen! Okay. Not really. But, trout will begin to behave differently and if you understand how they will react then you’ll have better success.

By the time you read this article it will officially be fall on the calendar.  However, we will most likely still be in a summer-like pattern where the majority of our trout are holding in deeper areas over structure.  There are always exceptions, of course, like the guy reading this after he just caught a bunch of fish in knee deep water yesterday.  Generally speaking, though, the timing of the first real cool fronts will play a major role in determining when our trout begin to transition into a true fall pattern. These fronts which are usually accompanied by rainfall will breathe life into our bays.  Dissolved oxygen levels will rise and forage species such as white shrimp and shad will be on the move.  Trout will spend more time suspended in the water column as opposed to hugging deep structure.  Trout will begin to migrate towards river mouths and the back ends of bays with the passage of each front.  Behavioral patterns will not occur overnight but over a two to three week period.

The first part of the month for me will most likely be spent drifting open water slicks much like what we do during the summer months.  Once the water temperature starts dropping below 80° we will begin checking some shoreline areas.  Such areas will include bayou drains, shallow reefs, grass flats and back lakes.  The fish will typically show us where we need to be most days.  Active mullet and small slicks near the shoreline areas mentioned can pay off big time!

Soft plastics will still be king early on but a few adjustments will need to be made.  As trout begin to suspend higher in the water column we typically switch to lighter jigheads – often 1/16 ounce.  I’m a little picky when it comes to lead heads and which one I choose is determined by the style of soft plastic I’m throwing.  I like the Saltwater Assassin Pro Elite jighead when I’m throwing a MirrOlure Lil’ John and I actually prefer the 1/8 ounce because it seems to feel more like a 1/16 ounce compared to other jighead styles.  I prefer a Saltwater Assassin screw lock head when I’m rigging a rat-tail Assassin and a standard push-on head when rigging paddletail baits such as MirrOlure Soft Shads or Saltwater Assassin Sea Shads.  The reason I prefer the screw lock over the push-on when using a rattail Assassin is because Assassins are made of softer plastic and I can get more mileage out of them with a screw lock.  They’re also much easier to rig straighter on the jig versus other styles, especially when rigging through the split belly. A soft plastic that is twirling on the retrieve will draw far fewer strikes than one that swims in a straight line.

With our trout staging closer to the surface it only makes sense to throw something that gets in their face.  When throwing plastics of the hard variety you would be doing yourself an injustice if you didn’t tie on a twitch bait.  There are many varieties from which to choose but my top three are the Borboleta Lele, Texas Custom Lures Double D and Rapala’s X-Rap Sub Walk.  The Leles and Double Ds are floating twitchbaits but run 4 to 8 inches below the surface when retrieved.  The X-Rap Sub Walk is a very slow sinking (suspending) lure.  All three have rattles that produce an enticing medium-pitched clicking sound with every twitch of the rod tip.  Some of the most violent strikes I’ve ever had were on these baits.

We will also get to enjoy some very good topwater action during the month of October.  As with any bait there is a time and place to tie on a surface plug.  Mullet pushed into tight balls or shrimp getting blasted out of the water may as well be a giant neon sign that reads “Throw a Topwater!”  There are other times when we’ll chunk one if we think the trout are there but are possibly just in a somewhat negative feeding pattern.  The side-to-side action and annoying rattle can sometimes at least draw agitation strikes when nothing else will.  In this scenario I generally stay put and try different things until they are ready to feed.  It could just be something as simple as waiting on a tide change.  Sometimes a smaller topwater can get the job done better than a larger and louder one.  This seems to be especially true in calm conditions.  Some of my favorite topwater plugs are MirrOlure She Dogs, Rapala Skitterwalks, Heddon Super Spook One Knockers and the Super Spook Jr.

Early cool fronts often bring stiff northeast winds which tend to bull tides up along shorelines.  This can actually set up well as trout begin to gravitate to shorelines anyway.  It just so happens that most of the protected shorelines in the Galveston Bay Complex on a northeast wind are high percentage areas for this time of year.  This coupled with higher than normal tide levels helps the water maintain good clarity.  Speaking of high winds, we all need to be smart when making choices about when to go fishing and when to stay home.  More often than not there are boat ramps on protected shorelines to keep us out of the choppy stuff.  Crossing miles of open bay in rough seas is not only unsafe but it’s hard on your boat as well.

Weather patterns and environmental changes seem to be changing more and more every year.  As a result, trout tend to be holding in different areas compared to years past.  Just because you caught them in a spot in October three years ago doesn’t mean you can repeat that trick this year.  Try not to get stuck running the same track lines every time out.  We’re all guilty of it.  There are plenty of signs to point us in the right direction if we are willing to keep an open mind.  Keep your head on a swivel and best of luck this fall!