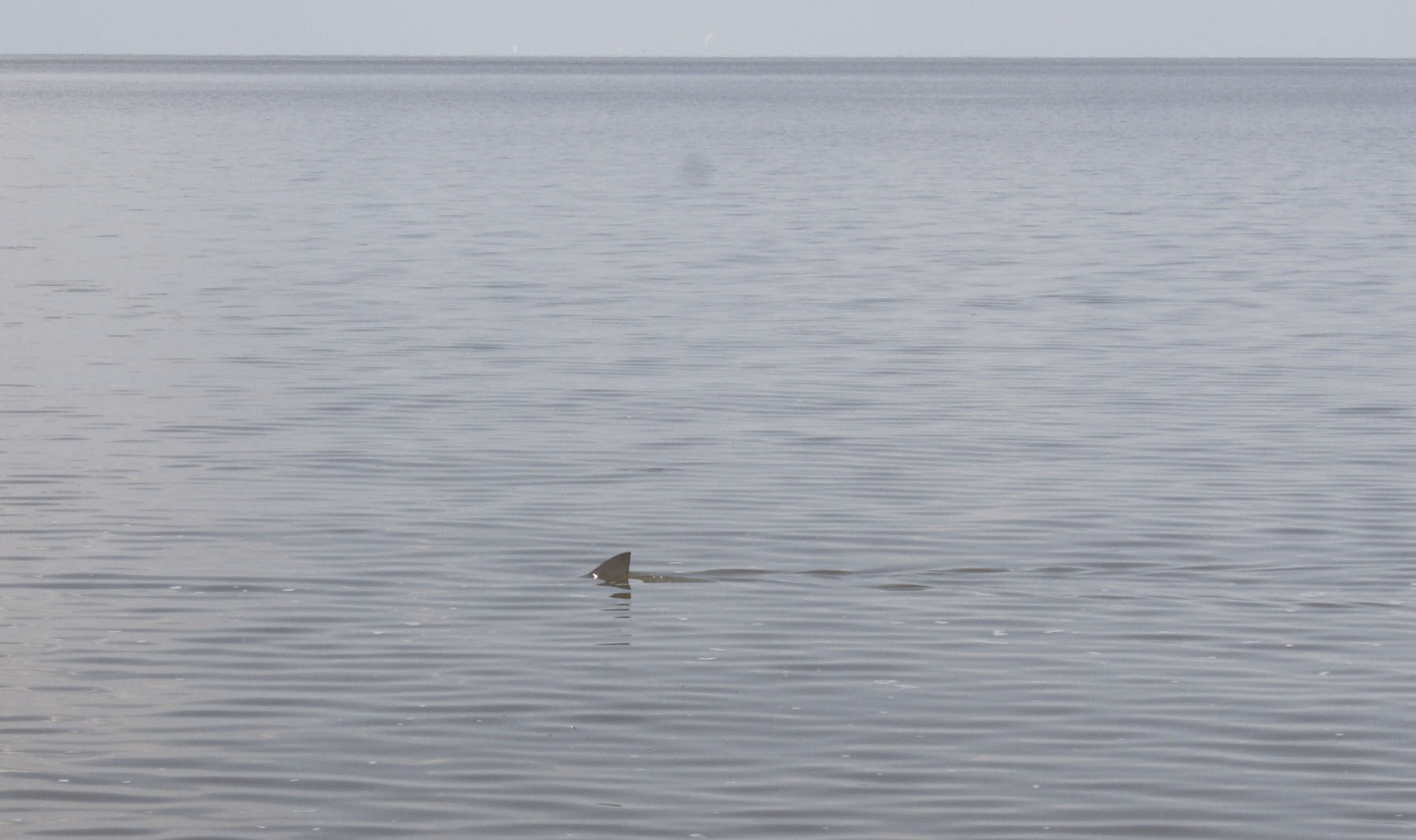 Lurking bull sharks will still keep us company through early September.
"So, Captain Steve, why did you choose this area?"

"Well, there's been a school of trout holding here and popping lots of slicks the past few days. They should be over on that northeast corner of the reef where the majority of the live oysters are. See right there? Look at those slicks!"

Those who have fished with me know that I fish with my eyes more than my GPS. I've always encouraged my clients to do the same. It's important to me that everyone on the boat hopefully takes home a little more knowledge than they came with that morning. Fishing during the summer months offers probably more visual signs than other times of the year around here. It's fun and it's easy most of the time, but more importantly we have on-the-water illustrations to lead the way. What a great way for new anglers to learn what to look for, right? I sure think so.

A summer spent chasing slicks, birds and bait concentrations can come to an abrupt end after an early cool front or two and September can present some challenges as we transition toward a fall pattern. Shorter days and lower nighttime air temperatures will cause water temperatures to drop. Trout sometimes tend to spread out and become harder to catch during this time. The visual signs can vanish.

If there's one thing I can't stand doing it's fishing blind. Unfortunately, we have no choice in the matter at times. At times you just have to hit them on the head and hope for a little luck.

"What are we looking at here, Captain?"

"Nothing unfortunately, but we caught some here yesterday."

Paying attention to trout movements when we could see them yesterday so that we can follow them tomorrow is all we can hang our hat on sometimes. This occurs for at least a few weeks until the true onset of fall. It's frustrating and new customers tend to ask more questions (which is good). Curiosity and the desire to gain knowledge equates to healthy thinking. Outright doubt and lack of confidence still gets into my head to this day. There is a trust factor with long-time regulars and the pressure isn't so bad.

While it sure is nice to cast to fish or signs one can see it's simply not possible sometimes. Wouldn't it be nice to live in a see 'em catch 'em world every day? There probably wouldn't be any trout left if it were always that easy. Try to imagine an intersection with no stop signs or traffic signals. Do we stop or keep going? Summer-to-fall transitional fishing can be a challenge, but paying attention to the patterns leading up to it can lead you in the right direction. Following the trout from Point A to Point B isn't all that difficult if you understand the "why" and the "when."

If the trout were holding over deep shell in mid-August and early September when the water temperature was 85 and an early fall cool front pushes through, some of the trout will move shallow while some will remain deep. The scenario is very similar to the winter-to-spring transition where they don't all migrate at once. I would compare it to a tropical storm warning when some of the "Nervous Nellies" evacuate immediately, then a few days later the tropical storm develops into a hurricane and there is a mad rush of evacuees. Mild fronts some of the trout move. More frequent and more severe fronts most of the trout move. Until then they're cruising the highways at different speeds. To put it in human terms – some stop at the convenience store for a snack while others ate before they left home and only care about getting to their destination.

In a typical weather pattern (if there is such a thing around here) early-September trout will hold in the same areas as they did in August. Deep shell and structure near cool mud is always a safe bet here in Galveston Bay. In Port Mansfield and other bays down south, early-September haunts may include drop-offs along ICW spoils. Regardless of which part of the Texas Coast you fish the patterns and behavioral habits are similar. As the month progresses, trout will frequent some of the shallow flats and coves. This is when wading will again come into play for us on Galveston. Once cooler weather persists white shrimp and other forage will begin their migration from the marshes and back lakes en route to the Gulf. Even then, some fish will be caught shallow and some deep. It becomes a ping pong match on the bay where staying on your toes and being cognizant of how weather affects trout migrations will pay dividends.

I like to throw small baits during this period because of the fickle feeding habits we may encounter. Rapala's Skitter Walk in the smaller 08 size and also Heddon's Super Spook Junior are great options and can call in weary trout that may not necessarily be in a feeding mood. In the soft plastic category Salt Water Assassin's 4 inch Sea Shads are always a safe bet especially when rigged on lighter jigs1/16 and 1/8 ounce. There are many days when a straight (swimming) retrieve versus the traditional jigging method will produce better results. The paddletail action of a slow-rolled miniature swimbait can be hard for even the finickiest trout to resist. We will even mix in a few Corkys and MirrOlures later in the month. Two of my favorites are MirrOlure's MirrOdine XL and Soft-Dine.

I am blessed to be able to fish every day. That's the good news and I am very thankful. The not-so-good news is that I do not have the luxury of picking the best days to fish. Not every day is a good tide day and the wind gods aren't always kind. Variables are called such because, well, they vary. Some days can be like a box of chocolates. However, there is one constant and that is the solunar table. Major and minor feeding periods occur every day. They usually comprise a one to two hour window. During the summer months when a trout's metabolic rate is high it may not make much of a difference, they feed often, but during some of the more challenging months such as September it's critically important. Any advantage during this time will increase your chances for success.

On days when slicks or hovering gulls aren't pointing you towards the trout, catching redfish can save the day. It has for me many, many times. Open water schools are typically still very active throughout September even though some are oversized. Soft plastics and swimbaits on 1/4 to 3/8 lead-heads work well for those open bay channel donkeys. Backwater reds are pushing white shrimp up against grass lines and back-lake reefs. Slicks, muddy streaks and terns are what to look for in open water while wakes and mud boils are a no-brainer in the shallows. Bagley's gold spoons and Salt Water Assassin paddletails are ideal for tricking skinny water reds.

We're all tired of the heat but it has been a fantastic summer – muggy weather and all. There's plenty to look forward to with dove and teal season approaching. School is back in session and the bays are less crowded. I'm taking a deep breath after a long and hot summer and focusing on what's ahead in our fishing world. And, if I can't see what I'm looking for, I'll just trust my instincts and pray that the next cast hits one on the head.