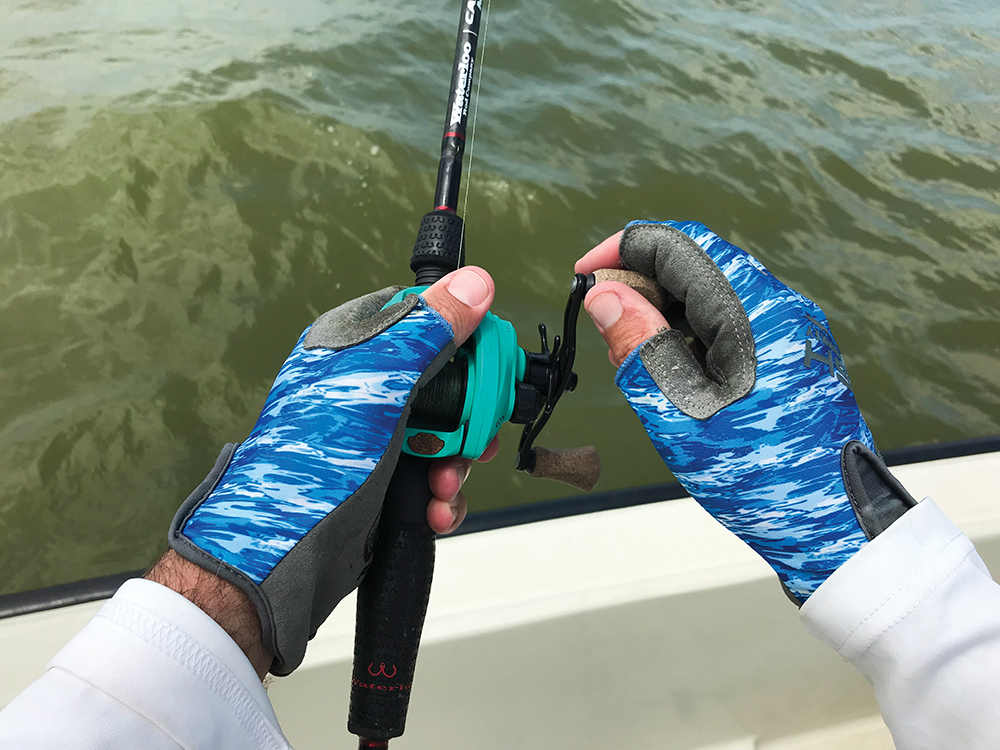 Fishing in comfort with my new Fish Monkey gloves. Helps support my arthritic hands and provides UV protection and a firm grip as a bonus!

Major league slugger Chris Davis of the Baltimore Orioles recently set a new major league record for the most consecutive at-bats without a hit. The previous record was set in 2011 by Eugenio Velez of the Dodgers. During a Monday night game against the Oakland Athletics, Davis made outs in his first two plate appearances to tie Velez for the record. In his third trip to the plate he scorched a line drive right at Oakland’s outfielder Robbie Grossman to take sole possession of first place all-time for the most at-bats without a hit. He would go on to strike out in his next two at-bats to extend his ever-so-humbling new major league record (www.theguardian.com, April 9, 2019).

Coaches and MLB analysts can only speculate what went wrong with Davis’ bat. Some said it was just bad luck because many of his hard hit balls just couldn’t find holes between defenders. Others were a little less forgiving by saying he’s failing to make adjustments to modern era defensive shifts. Regardless, one of the previously most feared sluggers with a seven-year $161 million contract was in the worst funk of his career.

Davis would finally end his slump by hitting a two-run single off Red Sox pitcher Rick Porcello, but not before extending his record to 0 for 54. He went 3 for 5 that day hitting two doubles and collecting four RBIs. He broke out of his slump in a big way. There is a laundry list of great baseball players (some of them Hall of Famers and future Hall of Famers) who have gone through slumps in their careers - Babe Ruth, Hank Aaron, Cal Ripken Jr., Joe Morgan, Mike Trout, and Roger Maris. The list goes on and on.

I was a young teenager when I caught my first trout on a topwater. I was casting a chrome/blue Rebel Jumpin’ Minnow along the edge of a massive raft of mullet on Dickinson Reef. From that day forward I fell in love with not only topwater lures but artificials in general. My passion for tricking trout and reds with lures was so intense that I fished every chance I got. Thankfully, my mom and dad owned a seafood business on Dickinson Bayou where I worked most of my summer days. Dad would allow me to go out and fish nearby waters for a few hours every morning before work.

I learned a great deal from my elders but I prided myself on figuring out what made trout tick on my own as well. Since those early days on the bayou, I’ve enjoyed great success catching thousands of fish and gained a tremendous amount of confidence in the process. I was fortunate to have started my guiding business in the early 2000s and didn’t have to deal with the freeze of 1989 while trying to make a living catching trout like Eastman, Plaag, Paradoski, Friermood, West, Williams, Frazier and others did. One might say that I started at a good time.

Then came June 8, 2019. This date marked the beginning of a slump that I will remember for a long time. It would last for roughly 10 days with all of my trips producing only a few keeper trout (lots of undersized), flounder and reds. In all honesty, only a few folks were consistently catching fish on lures during this period, but I wasn’t one of them and that bothered me.

After one of the better winter, spring, and early-summer bites I’ve enjoyed in a long time, I had run head-on into a brick wall. It all started with massive amounts of fresh water being released from the Lake Livingston dam. The Trinity River can make Galveston Bay the best bay to catch fish or the worst. As if excess freshwater and stiff southwest winds weren’t enough, my slump continued through a period of early morning low tides on the back side of a full moon. Needless to say, this wasn’t the easiest time to come out of a slump.

It looked like I was well on my way out of my rut while wading along a shell-covered shoreline with very good fishermen one morning. Rafts of mullet and slicks were popping up along a ledge out in front of us. We were having a hard time getting bites on soft plastics so I switched over to a MirrOlure She Dog to see if I could at least draw some agitation strikes. Low and behold, I started getting blow-ups and finally hooked up with a very solid trout. Unfortunately, it pulled loose at my waist. I looked down the shoreline and one of my customers was bowed up with a nice trout. I watched him net it then heard him yell in anger as he walked back to my boat.  My fear was that he had buried one of the trebles from his topwater in his hand. Thankfully, he had only broken his rod.

So now there are two of the four of us back at the boat while fish are popping slicks out on the ledge. As I’m walking back out to start chunking again I notice one of the other guys netting a big flounder. As he yelled out, “This is the biggest flounder I’ve ever caught!” it jumped out of his net like a tarpon. We did catch some nice fish that morning but most of the line drives we hit flew right into gloves.

Things improved over the days that followed and I eventually wiggled my way out of the worst slump I think I’ve ever had. When you fish almost every day, year after year, the law of averages will eventually come into play. Even some of the best fishermen I know don’t catch them all the time. In my world, a fishing slump is like going into a deep depression. I know that sounds dramatic but when clients are depending on you to put them on fish everyday (whether they’re keeping them or not) and you struggle, it affects you mentally. Since I know I’m not the only angler who has gone through this, here are a few things that helped me.

Don’t expect good things to come your way if your attitude isn’t right. Furthermore, no one will want to share a boat with you. Keep your chin up and try to have fun!

Try fishing other bodies of water. My own personal experience is that when I’m fishing a different bay system, I’m not thinking about where I always catch them. Instead, I’m focusing more on water temperatures, bait concentrations, etc., instead of worrying so much about “spots” where I’ve caught fish before. In other words, I’m using my senses more than my GPS.

Take A Few Days Off

Sometimes we just need to step back and take a little break to regroup. I enjoyed playing golf with my dad for a couple of days and not even thinking about fishing.

Not only will you beat the heat, you’ll be able to get a spot before the crowds arrive. Sometimes being thirty minutes early can change the outcome of your trip.

Make sure you have the very best gear to get the job done. When you’re struggling you don’t need the added disadvantage of using World War II rods and reels. Go with up-to-date state-of-the-art gear such as Waterloo rods and Concept reels. The key here is to use equipment that is not only light and sensitive to help you feel every bite, but to also allow you to fish hard all day without getting fatigued. Don’t forget to use sensitive and hassle-free backing and leader material. The line is just as important as what you’re putting it on. I prefer Seaguar Smackdown Tournament Braid (30 lb.) for my backing and Seaguar fluorocarbon (20 lb.) for my leader.

Through the years I’ve learned to not worry about what everyone else is catching and just focus on what’s happening on my boat. By not allowing hearsay to cloud my thinking I can focus on what I know how to do. Slumps are no fun but sometimes you just have to fish through them. The best part about being in a slump is coming out of one. Best of luck my friends!