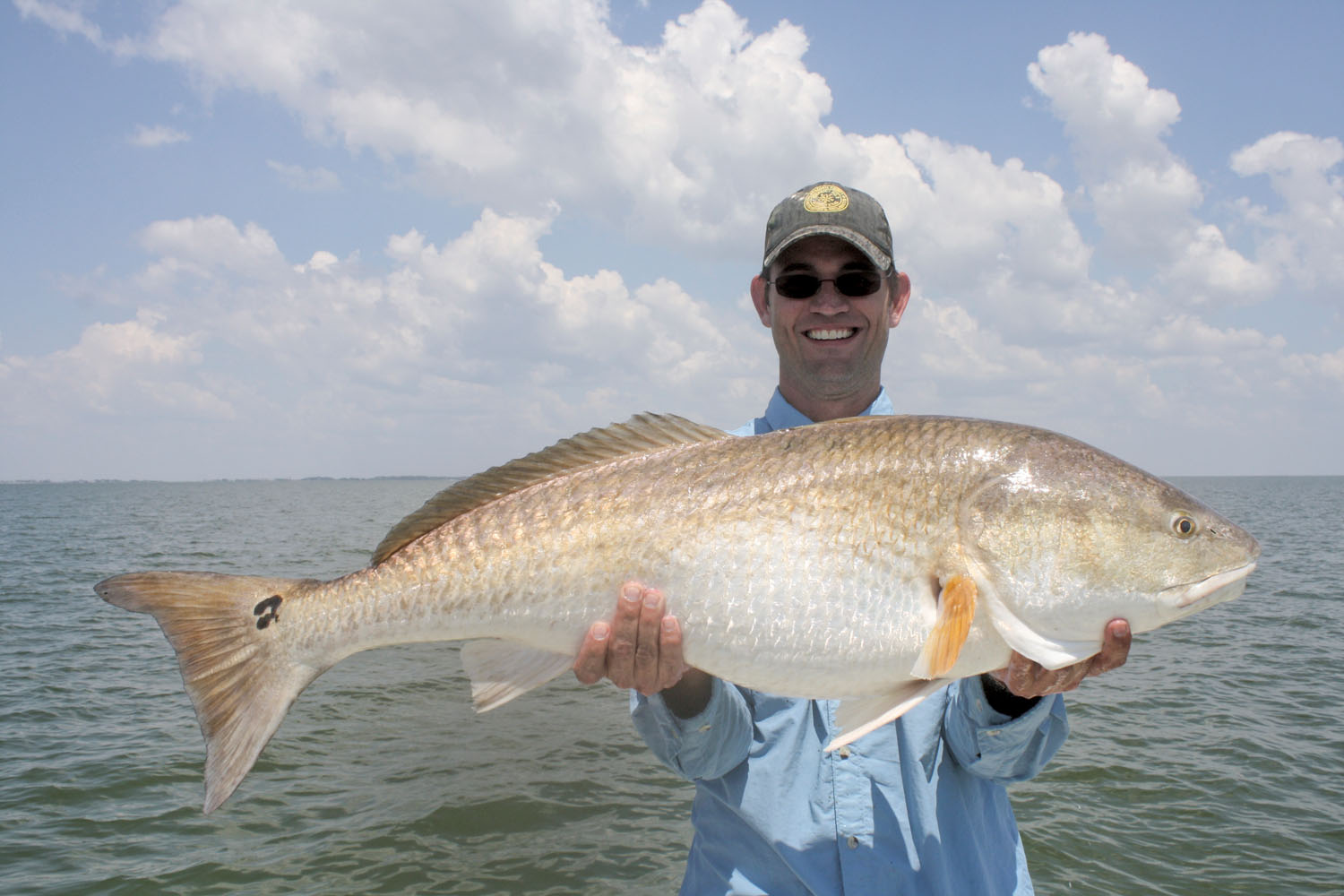 This 42 inch giant (CPR) was a pleasant surprise for Aaron Wilde on a day that required a lot of relocating while nickel and diming trout during the Late September – Early October “grind” period.

Late summer and early fall can present some challenges as unsettled weather along with weak fronts tend to disrupt the predictable trout patterns we've enjoyed most of the summer. It's very unsettling to roll out without a reliable game plan knowing that the fish you were catching yesterday have probably relocated. But you can't get discouraged because much like the weather here in Texas - just wait five minutes. As early November approaches, stronger cool fronts will gradually ease trout into a more stable pattern. This is fantastic news for those who realize the effects and know what to look for when such changes occur. Knowing that you have a plan when you leave the dock is the best feeling in the world. Predictability breeds confidence and allows all parties involved to have a more enjoyable experience on the water.

Here along the upper coast patterns can be broken down into six phases. These are the approximate time frames in which I believe trout patterns change and require strategic adjustments. There are variables which may slightly affect the timing, but this seasonal pattern "cheat sheet" should put you in the ballpark.

In recent years November has been more reminiscent of October due to mild weather. White shrimp migrations lasted well into December last year and even into January in some areas. Our pattern is almost always the same. However, the timing can vary based upon rainfall amounts, water temperature, etc. As water temperatures drop, specks instinctively migrate to high-percentage food source areas such as river mouths, soft-bottomed areas with deeper guts and bayou openings realizing that food supplies will decrease with each passing front.

Just about any option is an option. Wading shorelines especially near marsh drains is productive for trout, reds and flounder and you may luck into a big trout. The MirrOlure C-Eye Pro Dog topwater has really impressed me with its medium pitched rattle and easily employed side-to-side cadence. Going below the surface with a MirrOlure Marsh Minnow provides a great shot at flatfish and reds. If wading isn't your thing then open-water drifting can be stellar during this peak time of white shrimp and shad migrations. Working birds is always popular and provides lots of bites, but working them correctly provides the right bites. Never approach a school of trout under birds using your outboard. Always stop at least 100 yards away and proceed with your trolling motor. Take notice of the direction the school is moving, then approach laterally while casting into the front of the school. The majority of the larger trout are almost always leading the pack. Throwing soft plastics into the schools are a no-brainer but don't be afraid to throw topwaters. We quite often weed out some of the smaller trout by doing this.

Fishing slicks are most definitely still a great method for catching trout during this period, especially the larger ones. Learning how to set up on slicks based upon wind and current will enable you to maximize opportunities. Simply put, the fish are closer to the small slicks versus the larger ones. Distance yourself behind larger slicks leaving room for smaller ones to appear between you and the old (large) slick.

Cold water pattern - Mullet become the primary food source as many smaller forage species have exited the bay. Slicks are not as prevalent as during the warmer months because of less frequent feeding due to lowered metabolism. Mud and silt bottoms lined with scattered shell near deep guts are the best areas to target. Contrary to the popular belief that trout will move to very deep water, most trout will stage in 3 to 5 feet barring any extreme water temperature drops. Target color changes caused by wind or current using mainly slow-sinking plugs such as MirrOlure's Paul Brown Originals, MirrOdines and soft plastics rigged on light-weight lead heads. Late afternoons and early evenings can produce better results a couple of days after strong northers. Wading is most often the best option, but plenty of opportunities exist drifting on the calmer days as well. In my opinion, this is the beginning of big trout season on this part of the Texas Coast as trout are hefty from gorging throughout the fall.

Spring to early summer transitional pattern This period of time can result in some of the toughest fishing on Texas' upper coast. If instant gratification is your thing then you may want to keep your boat on the trailer. The silver lining is that the ceiling is high for your chances of catching trophy trout. This is a time well-suited for true grinders and preferably those who don't mind getting out of the fiberglass as trout tend to occupy grass-lined shorelines and coves with scattered shell. Swollen spring tides tend to push trout very close to shorelines making drifting such areas difficult and less productive especially during springtime stiff winds. Speaking of wind, a brisk wind can actually aid in targeting and catching trout as wind-induced color streaks provide ambush points. The increased turbidity also absorbs heat from the sun's rays.

Forage species mainly include tiny brown shrimp, newly-hatched shad and glass minnows. Oftentimes trout are finicky when feeding upon such tiny prey. Persistence is key during this time and the best feeding periods are likely during the late afternoon hours. Suspending plugs, small topwaters and soft plastics rigged on 1/16 ounce or H&H Flutter Jigs will increase your chances. Soft plastics or Berkley GULP rigged beneath a rattle cork can also be very effective for these hard-to-trick trout when all else fails.

This is an exciting period of time for trout fishermen as everything starts to come to life. Forage species have now grown to a larger size and are more concentrated. This combined with warming water temperatures triggers trout to actually start forming legitimate schools again. Increased metabolism from the warmer water can induce some of the most violent strikes of the year. Wadefishing is still productive and open-water reef fishing finally comes back into play. Target slicks and birds. Patterns are almost identical to those experienced during the late October through November period. Topwaters and tails are tops on the list.

Water temperatures in the low to mid-eighties tend to keep trout in deeper water over hard shell. Occasionally schools will migrate away from structure to seek the comfort and increased oxygen level provided by cool deep-water mud. Slicks will lead the way. Schools tend to not move very far from day-to-day making them somewhat predictable and easy to catch. MirrOlure Provokers, Tidal Surge Split Tail Mullets and Saltwater Assassins on 1/8 or 1/4 ounce jig heads are go-to baits. However, the topwater bite can be outstanding as well even while drifting in 7 to 10 feet of water. The best locations are mid-bay reefs and channel spoil banks. Tide movement is paramount during this time period.

This summer to fall transitional can frustrate even the most seasoned angler. Working multiple areas rather than focusing on one or two will lead to more productive days as trout tend to spread out a bit leading up to a true fall pattern. Trout are definitely on the move during this time. This period bears some of the same characteristics of the March through April period except my personal experience leads me to believe that there is probably a higher percentage of fish in deeper water when making the comparison. Deep reefs, shorelines and back lakes are all good for a few fish here and there, but don't expect to just pull up to a spot and catch all you want. To me, a lot of learning takes place during this stretch. Soft plastics and noisy topwaters such as MirrOlure's She Dog are employed quite often during this period. My clients may disagree but the added challenge can make you a more astute angler in the long term.

Predictability is the blueprint for success. Pay attention to changes that positively or negatively affect feeding patterns. The two main factors affecting trout movements are water temperature and salinity. The lifeblood of our estuaries originates in marshes, backlakes, bayous, coves and rivers. These are the starting points and ending points over a 12 month period. Once you've grasped the seasonal patterns and know what to look for, you'll be able to find your pot of gold on a regular basis.