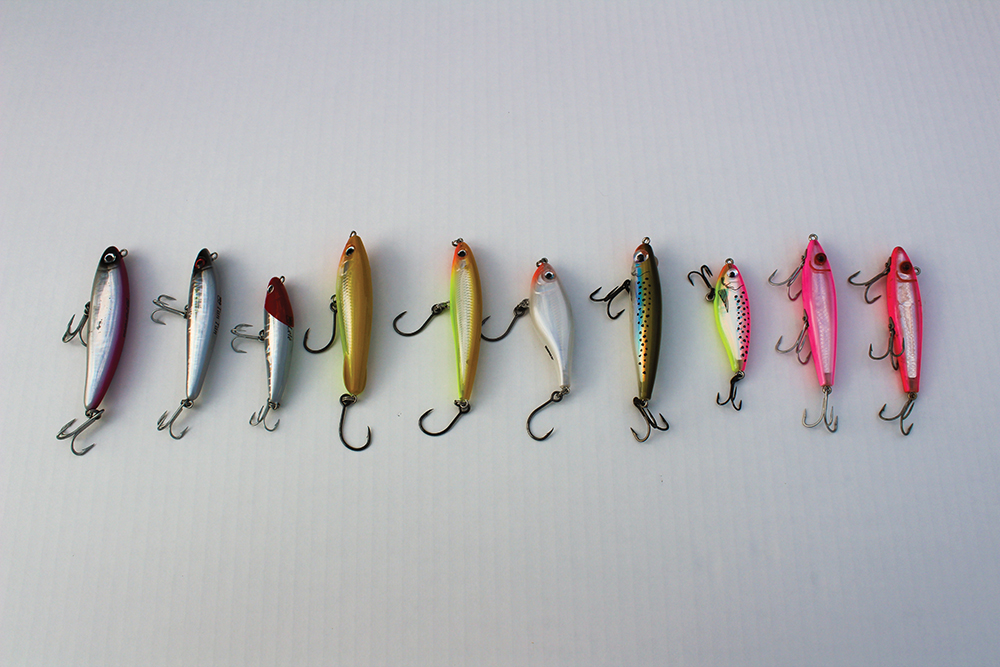 I would be willing to bet that the majority of saltwater anglers who exclusively throw artificials rely on soft plastics more than any other type of lure when trying to trick speckled trout.I can certainly say that this has been the case with me for years.Most of us tend to lean more on MirrOdines, Catch2000s and similar slow-sinking plugs only during the colder months, then such baits begin to collect dust with the onset of summer.While catching fish on soft plastics is a proven high percentage play, I’ve yearned for something different for a while now - something a little more exciting.The old tried and true twitchbaits and a few that are new on the fishing scene are providing the adrenaline rush I needed.

In the last couple of years I’ve begun to use twitchbaits (mainly of the hard plastic variety) more and more during the warmer months.I’ve not only had great success but it’s taken my love for fishing to a whole new level.It’s almost become an addiction for me.The jolt of a solid trout or red hammering my lure during the pause after two hard twitches sends electricity through my rod, hands, arms and shoulders then eventually up my neck before manifesting itself into a giant smile on my face.The feeling is truly bad to the bone!

There are many varieties of hard plastic twitchbaits and each is suited for different scenarios.While they come in all shapes and sizes, the characteristic that ultimately allows us to categorize them is buoyancy.There are three main categories – floating twitchbaits, suspending twitchbaits and sinking twitchbaits.Having an in depth understanding of what controls your target species’ behavior will help you figure out which style to use.

Salinity levels, water temperature and depth of forage species are a few things that determine where speckled trout will suspend in the water column.There are other factors such as dissolved oxygen levels and current velocity that can have an influence as well.Determining whether trout are upper, middle or lower in the water column can be accomplished a number of ways.Visual confirmation of surface feeding activity is an obvious one but more often than not we’ll have to probe the depths using various lures and retrieval methods.

Size of forage species, especially shad and glass minnows, can influence the depth of feeding trout.During spring and early summer (at least here in Galveston Bay) the shad are tiny and congregate near the surface.This causes the trout to suspend just beneath where they can simply ascend and grab an easy meal whenever they want.Floating and suspending twitchbaits work great under these circumstances.The erratic side-to-side darting action coupled with a high-pitched internal rattle can drive a trout crazy.

One particular floating twitchbait that I’ve absolutely fallen in love with has its roots in Southeastern Brazil where it has proven to be deadly on peacock bass and other species.Along with a few other guides, I’ve been testing three particular baits from the Borboleta family of lures.The Perversa, TanTan and LeLe’ have become part of my daily arsenal with the LeLe’ (smallest of the three) getting most of my attention.I recently had a day where the trout would simply not eat a soft plastic.The surface was dead calm and there was very little tide movement.To make matters even more challenging, our trout had gorged on shad under a 98% full moon the night before.My clients and I were able to trick more than a dozen very solid trout using mainly LeLes, on a day when most of the lure guides really struggled.

It’s one thing to catch fish on a new lure when everyone is catching left and right, but when a lure can trick a stubborn full-bellied trout when not much else can really says something.Special thanks to my friend Bob Hardy for introducing me to these intriguing lures and to Jimmy Burns at Waterloo for stocking them.Visit the Waterloo Pro Shop in Victoria, Texas or www.waterloorods.com to give them a try.

As water temperatures warm over the course of the summer, fish can seek cooler water lower in the water column.This is when sinking twitchbaits such as MirrOlure’s 52 and 51 Series can be quite effective.I like the 52s when I need to get down below 5-feet or so and the 51s when the fish are 3 to 5 feet below the surface.

As with any lure, salinity will have an effect on the sink rate.The higher the salinity the slower the lure will sink.I can remember chunking a Catch2000 (slow-sinking suspending twitchbait) in West Galveston Bay one time when the salinity was so high that it actually floated.Current and wind velocity must be taken into account as well when choosing the right plug.If there’s more of either influence present, a sinking twitchbait may be used in place of a suspending lure to accomplish the same result.

In my opinion, a fast action rod works best as opposed to softer tipped rods when working twitch baits.I prefer my 6’ 6” Waterloo Ultra Mag for making the quick short jerks.There’s also a benefit to using a higher gear ratio reel.This enables you to stay in contact with the lure after making erratic twitches.My Concept TX and Concept Z are perfectly suited for the job with their quick 7.3:1 gear ratios.They are both strung with 30lb Seaguar Smackdown Tournament braid, topped with 20lb Seaguar fluorocarbon leaders.As with most plugs, I use a loop knot to allow for a more natural side-to-side motion.

One other thing worth mentioning is the position of my rod while working a twitchbait out of the boat versus wading.I keep my rod tip pointed downward towards the water when I’m retrieving twitchbaits while drifting.While wading I typically keep my rod up at about a 45-degree angle as I work the lure.If I notice the lure trying to pop upward rather than wiggling side-to-side down below the surface, I’ll adjust my rod angle to run almost parallel with the water.The key is to find the proper rod angle and cadence to make the lure do its job.

I have used many different brands and styles of lures through the years.Each one had their place and time for the task at hand.Some were more effective during colder months while others were better suited for warmer periods.Regardless, I continue to use only the ones that I truly believe will put me and my clients in the best position for success.It’s no coincidence that some of my favorite baits happen to be from companies that have been around a very long time.This tells me that they must be doing something right and I’m apparently not the only one who thinks so.

It’s always exciting to mix in different styles of baits and strategies on my trips.It adds a different twist to tricking trout, one that lots of clients have never experienced.The main thing is that we’re having fun – especially when we’re throwing twitchbaits!