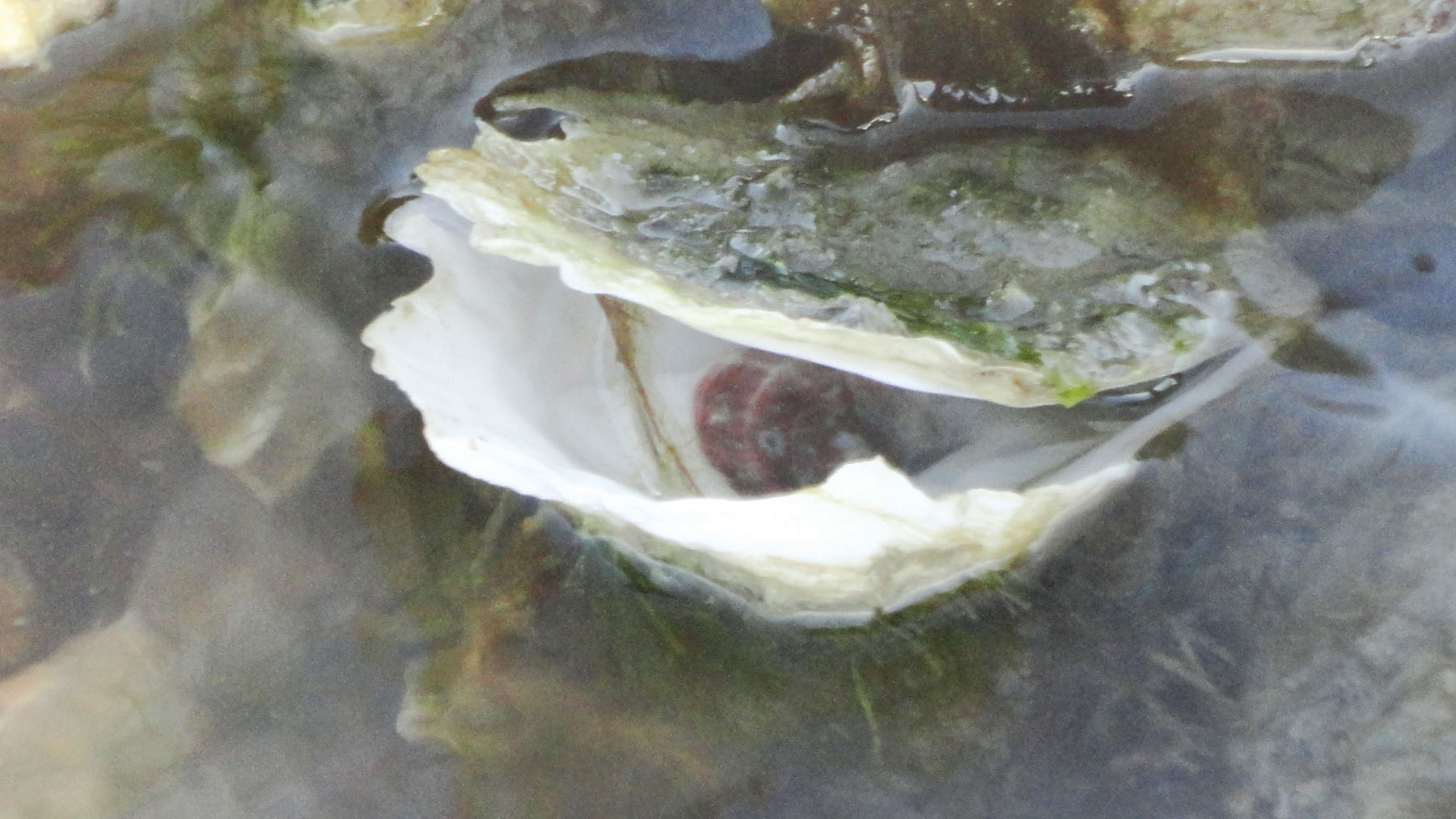 Dead oyster most likely because of “Dermo” in a high-salinity part of Galveston Bay. Once the protozoan parasite is ingested by the oyster it lives in its digestive tract until the oyster dies. “Dermo” is harmless to humans.
It always amazes me how songwriters can keep coming up with new lyrics after all of these years. After all, what could there possibly be left to write about that we haven't already heard? When I received the phone call from Everett asking me if I was interested in taking on a feature writing position following Mike McBride's retirement two things immediately came to mind; A. How could I possibly fill McBride's shoes? Let's face it; he has molded his articles into an art form. And; B. What information can I share with readers that they haven't read a million times?

Driving home from the Houston Boat Show the next day I called Everett and humbly accepted his offer to give me an opportunity to become an even bigger part of this fine magazine. I explained to him that I was just a simple-minded fella who grew up on the bayou and, while I am college edumacated, I typically don't use many "big words." He proceeded to tell me that easy-to-understand articles make for easy reading and that I should "just be myself." I thought to myself, "well that sounds easy enough." Furthermore, I believe that while the desired message may be similar at times, some of the lyrics may be changed to suit the style and personality of the artist. Lending a different perspective especially one derived from personal experiences can occasionally shed new light on things.

As I tossed around ideas for this piece I couldn't help but to think about the constant changes taking place in my life and the world around me. Some changes catch us by surprise while others are so predictable that they're almost like premonitions. When we're on the water we are faced with variables that must be addressed in order to give us the best opportunity to catch fish. Examples may include a wind shift or a slack tide. Those are easy ones that usually only require relocating. But, what if changes that have occurred over weeks or even years force us to re-evaluate the way we plan our fishing trips altogether? Good and not-so-good developments have taken place along the Texas coast through the years. Many have happened at the hands of Mother Nature. Having the ability to adapt requires learning some history about the areas we're fishing. What elements made such an area productive before? What influences the area now and are its dynamics changing? Do we know where to go and what to do if something changes? How many times have we told a buddy, "Man, we used to catch a lot of fish on this reef?" We need to ask ourselves "why" then try to find answers.

Over the years, I've learned to study hard and pay attention to anything that would improve my ability to help clients catch fish. Learning the ropes was tough without much help, but it was the only way to truly learn. Nowadays, internet anglers have the ability to eliminate years of hard work with a few keystrokes (hashtag lazy fishermen). Detailed photos are also readily available along with endless helpful hints from fishing board hounds. Back in the day there were a few local fishermen and a handful of guides that kept what they knew to themselves, almost like trade secrets. Be that as it may, we must learn to accept and acclimate to the changes in this new era of fishing. Focusing exclusively on "spots" to catch fish is short-sighted and will bite you in the butt sooner or later. Understanding the "how" and "why" is what separates the networkers from truly insightful anglers. The influences of weather, seasonal changes, feeding periods and hydrology are just a few of the variables that must be considered. I hear it all of the time "Man, Steve, we went back to where we caught some nice trout a week ago and they just weren't there. What happened?"

Sometimes the answers are obvious, but once a career day is experienced it's easy to become oblivious to logic. The part of the bay where he and his buddies caught their fish happens to be where multiple tributaries carry freshwater into the bay. The area's watershed had already been saturated from steady rainfall then experienced almost another 4 inches since said fish were caught. Redfish can handle low salinities, but trout will usually push elsewhere when it drops very much below 10 parts per thousand. Where will the freshwater flow to once it enters the bay? Where is the closest structure (reefs, grass beds, etc.) on the way to higher salinity? Where are the deeper areas in the vicinity? Because freshwater is slightly less dense than saltwater, higher salinities can usually be found lower in the water column. Some of the not-so-obvious reasons may involve water temperatures plummeting resulting in metabolic slow-downs and less frequent feeding periods. Was there any tide movement? Slicks? The presence of bait? Maybe the fish were caught on She Dogs because there was a moderate chop on the water and then the surface was like glass on their return trip. Did you try throwing Paul Brown Original Corkys or Salt Water Assassins when you went back to your "honey hole" or did you stick with the same loud topwaters that caught them before? The list is endless. The fact remains that circumstances change. All areas are subject to deviations. Sometimes changes occur within days, others over decades. Recognizing the change and effect determines whether we get "lucky" or go home with our tails tucked between our legs.

On a broader scale let's consider some of the changes that have occurred beneath the surface over the course of time. Erosion, subsidence and hurricanes have had a cumulative effect on what's above and below the water. There are reefs that used to be islands and sand bars that are now flats. New cuts have been created. Knowing what used to be above will help us to better understand what's now hidden from plain view. Nothing compares to witnessing such changes first-hand over thirty-plus years, but Google Earth's Historical Imagery feature is a great start otherwise. This is a great way to find some really good no-name reefs!

Sustainability of our fishery begins with habitat. Without it, every living organism throughout the food chain struggles. Just ask our friends down south how their fishing was after excessive run-off caused the Arroyo Colorado to inundate the area with freshwater in the summer of 2010, transforming the hyper-saline Lower Laguna Madre into what closely resembled a muddy catfish pond. Many acres of high-salinity thriving seagrasses were killed. Seagrass is to the Laguna what live oyster reefs are to Galveston Bay. Much like oysters, seagrasses provide food and shelter for a variety of marine organisms. Also like oysters, they absorb nutrients and help prevent erosion while also improving water quality. When habitats are damaged or removed, support for forage species (shrimp, finfish, crabs, etc.) diminishes. Once this happens, predator fish relocate. Since 2010 things are improving for the folks down in God's country as grass beds are returning and fishing is good again.

Here in Galveston Bay we have a similar issue with loss of habitat, but for a different reason. It's a combination of several influences, but the two most glaring reasons are siltation from Hurricane Ike and perpetual high salinities. Ike silted over an estimated 60% of the bay's live oyster reefs in September of 2008. While some areas have recovered through means of silt removal and oyster reef restoration projects, most areas are still struggling. A high salinity-thriving parasite known as Perkinsus marinus (previously called Dermocystidium marinus or "dermo") has also devastated many of the oyster beds in the Galveston Bay Complex and other estuaries over the years. The foundation of most aquatic species in this estuary is live oyster beds. Gaining knowledge of where live reefs are will greatly increase your chances at catching more fish.

Our estuaries are ever changing. We as fishermen owe it to ourselves to stay abreast of past and present ecological changes. Not only will it make us better fishermen, but it's our responsibility as stakeholders.