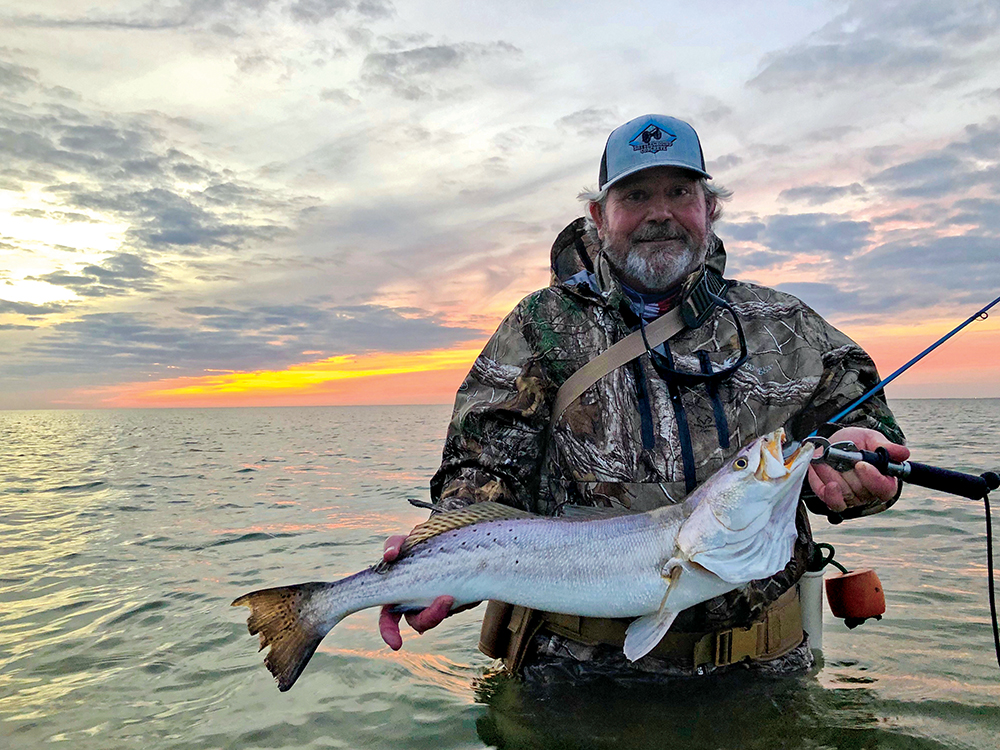 Jeff Bearden with his personal best trout (6.75 lbs.). He showed patience, stayed put and focused while waiting on the bite to develop. Good job on the release!

It’s been a soggy and chilly winter of grinding but God has a funny way of changing things up just when we need it the most. For me personally, I tend to hit somewhat of a burnout period near the end of each season. However, just when I’m tired of fishing the same patterns in a lot of the same areas everything changes and I become rejuvenated. When we’re sick and tired of the wet and cold conditions warmer weather always arrives. By the end of the summer when we feel like we just can’t take the heat anymore the cool fronts start coming. The cycle repeats with every season. It’s easy to fish our way through the comfortable ice cream days when it’s so easy that anyone could catch fish, but what about the in-between times when the going gets tough?

We hit a stretch during the latter part of winter when things weren’t quite so easy. It seems like a cold front blew through just about every week. The wind puffed hard out of the south for days then flipped around and ripped from the north. There were only one or two days per week when the wind blew less than 15 mph. While most folks would rather stay home, there are plenty of fish to be caught in these less than “ideal” conditions. Duck hunters hunt in some pretty nasty weather. I did it for years. Some of the biggest trout are caught in miserable conditions. It’s all about how bad you want it or as I often say, “How mad at ‘em are ya?”

There were many days when we waded until well past sunset after making hundreds of empty casts before finally being rewarded. There were others when the above average fish we were seeking never came to hand. It comes with the territory this time of year and, besides, it’s all about the hunt. It’s been more than nine years since I’ve harvested a trophy buck but I still crouch down in my South Texas bow blind every chance I get during the season. I’m not going to stop hunting just because I can’t kill a trophy every year. The chase is what keeps us going. While getting plenty of bites is certainly entertaining our success should never be measured in pounds of fillets.

Historically, March can challenge our mental and physical fortitude. Just when we think winter is on her way out a late cold front will cause our trout to stay in limbo as is typically the case during this back-and-forth month. Stability is not a word that typically comes to mind when discussing March. “Calm” is another word that’s usually not used in the same sentence. Stiff easterly winds will often force us to wade tight to shorelines as our bays swell with more water than we’ve seen in months. The funny thing is that these areas are where we need to be anyway, especially for quality fish. My personal best trout was caught in March 2009 while wading a Baffin Bay shoreline in fairly stiff winds and high pressure. The 9.25 pound speck couldn’t resist the wiggle of my amber Corky Devil. I’ll never forget that day. I was with my old buddy Walt Kalinowski and some friends. We toughed it out in less than desirable conditions but everyone in our group was rewarded with impressive quality trout. I remember losing another one that may have been even bigger, but I got “buck fever” and forced her to hand too soon. It’s hard to stay calm when fighting a big trout, but you have to.

Knowing how the elements affect fishing areas is very important. Wind and current play a major role in deciding where to fish. Salinity, water temperature, water clarity and barometric pressure are also variables to consider when game planning for a trip. Structure, habitat and bottom undulations are some of the constants to be added to complete the equation. We can also throw in the added variable of boat traffic (fishing pressure) as well. The latter can sometimes be avoided by fishing late afternoon hours and even at night. These are frequently time periods when late winter/early spring big trout like to feed anyway.

I recently had an off day due to a cancellation so I called my friend, Bob Hardy, to see if he wanted to scout a few areas for big trout with me. It was two days after a pretty strong cold front. The water temperature had risen to 56° and the barometric pressure had dropped to 1015 millibars. We had some areas in mind that set up well for the conditions and the time of day we were fishing. As we jumped out at our first stop we noticed a random mullet flipping here and there. Despite the promising signs, after more than an hour without a bite, we decided to try spot number two. This area shared some similarities with our first stop in that it consisted primarily of mud and shell. However, it was closer to a low salinity end of the bay creating the scenario of a stopping point or “stack up” situation for the trout.

The tide was peaked but due to start falling within a couple of hours. The new moon major which didn’t end up being anything “major” had just ended at 3:00 PM. I was throwing a Corky Fat Boy and Bob was throwing his new Borboleta slow-sinking Hot Rod twitchbait. The Hot Rod is similar to the Lele but is much smaller and shaped more like a shad. Around 5:00 PM we could feel the current begin to move as mullet became more active along the gut in which we were casting. I finally stuck a really nice trout only to have it pull loose right in front of me. We both started getting more bites but they were non-committal. We were obviously standing in fish but they weren’t quite ready to feed. Bob hooked a big trout on the Hot Rod only to have it pull loose within arm’s reach.

I decided to switch over to a topwater in an effort to make one mad enough to commit. The blow-ups came immediately but few hook-ups. It was now 5:45 PM and as the sun disappeared behind the horizon my pink Skitterwalk disappeared beneath the water’s surface. I knew I had a really good trout and I was praying that this one would stay connected. She did indeed and after a couple of quick photos we watched her swim away. We continued to get bites well after sunset, releasing two more quality trout before calling it a night. We ended up releasing an 8.25, 8 and 6.25 pound trout. We fished hard on into the darkness for only a few fish. Was it worth it? Hell yes it was!

I hate to say it but the vast majority of fishermen don’t exhibit the patience it sometimes takes to catch trophy trout. I caught more big trout before I started guiding because I didn’t cave in to the need to get bit. I didn’t care how long I had to stand in one place or how many casts I had to make if it meant having the opportunity to catch a special fish. Sometimes you just have to dig your heels in and wait for the trout to feed. If you’ve done your homework and you have the patience then the odds are in your favor. It doesn’t hurt to have a little luck every once in a while too!