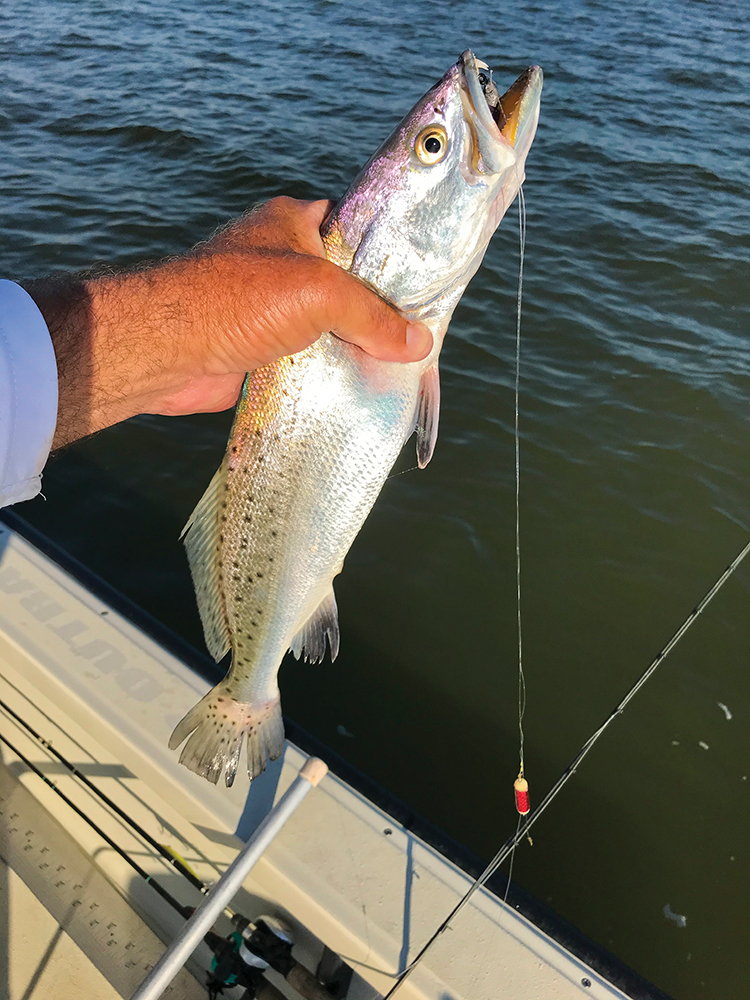 This trout had a leader hanging out and a croaker hook in his belly and still ate my MirrOlure Lil John! These trout don’t have any pressure on them though!

The Galveston Bay Complex covers approximately 600 square miles and has a surface area of about 345,000 acres. Historically, each section of the complex has possessed its own unique set of characteristics. Through the years, significant characteristics of most of these areas were defined by live oysters, seagrasses, water depth, and salinity. These are all critical traits to consider when targeting speckled trout, especially heading into the fall fishing season. However, the key word here is “historically.”

In years past we would frequent areas such as Anahuac Pocket and Jack’s Pocket in Trinity Bay. These general areas would come to life with the passage of each cold front. I can remember many days working birds hovering over schools of trout that were 100 yards long. Some of our best days for hefty fall specks were spent working slicks or balls of shad at the mouth of the Trinity River. The same was true for F Lease, C Lease, and Skippy’s, just to name a few. Clam beds and oyster reefs were the ticket.

There were also a few areas in the back of Jack’s Pocket where widgeon grass was so thick it looked like Port Mansfield. Reefs from Houston Point all the way to the HL&P Spillway also produced some insane stringers of fish.

One of my best days ever was on Fisher Reef. The entire reef was littered with slicks. I still remember the clients I had, what we caught, and the lures we used. We landed over 150 trout to 6-pounds. After that we found several schools of redfish at the wells and caught dozens of them.

Upper Galveston Bay was just as good. We caught fish from Tin Can Reef in Tabbs Bay all the way up the San Jacinto River. The colder the weather got the further upstream we would go. Shell, mud, and deep water access with plenty of food made finding and catching those fish a no-brainer.

The west shoreline from Sylvan Beach to April Fool Point was dotted with productive spots. Across the bay, East Bay provided us with some career days as well. The north shoreline from Smith Point all the way around Frozen Point and up to Oyster Bayou possessed too many good spots to even try to list.

One of my best days ever for big trout was spent wading the shoreline just behind Cowshed Reef. Almost every fish was caught on Chartreuse / Pearl (83MRCHPR) MirrOlure She Dogs. We used to paint the heads on them candy apple red. We caught most of our trout casting out towards the bay in belly deep water and drew massive explosions from beautiful upper-slot reds while casting back towards the shoreline. It seemed like the giant rafts of mullet stretched down the shoreline as far as we could see. Our two biggest trout (a 27 and 28.5 incher) actually were mixed in with the redfish in the shallow, mullet infested water. The south shoreline was good at times too, but I remember our better quality fish coming from the opposite shoreline. Certain open bay reefs were very productive in October too, with Deep Reef my favorite by far.

I can go on and on about the good old days but let’s chat a bit about the here and now. Few folks these days debate the fact that fishing around here doesn’t seem to be as consistent as it should be. Those few who do not either refuse to believe we have issues or, they’re simply too young to remember what it was like a few years ago…and they have nothing to compare it to.

Natural and man-induced changes have given new identities to some of the areas I’ve mentioned here. So, in recent years these changes have forced folks like me to deviate from our old ways. For instance, I mentioned a few fall hotspots in Trinity Bay. Well, up until recently the salinity there has been extremely low. Freshwater from the Trinity River has made catching more blue cats than trout a common occurrence for the better part of the past six years. In addition, most of the live oysters died because of the super low salinities, which is another issue within itself. Prior to that the fishing there was excellent, especially during the drought years. However, those long drought periods had some negative impacts of their own.

There are far fewer live clams (Rangia cuneate) in Trinity and the back of East Bay. I was told by a very reputable source at Texas Parks and Wildlife that the lethal protozoan parasite, Dermocystidium (also called Perkinsus marinus), was the culprit. Dermo thrives in warm, high-salinity water. Dermo has also been responsible for high mortality in our oysters (Crassostrea virginica).

Our area experienced almost five years of drought following Hurricane Ike, with the worst during that stretch being 2011. At one point the salinity at the mouth of the Trinity River measured greater than 30 ppt (parts per thousand), which is basically the same as the gulf.

Hurricanes, excessive ship channel traffic, dredging and years of natural erosion have also changed the shoreline and bottom landscape, leaving us with fewer places to wade successfully. The Vingt-et-un Islands are a perfect example of this. There are islands that were visibly exposed not so many years ago that are not even reefs today. Other spots that come to mind are Hodges and Little Hodges. Both are submerged these days except on very low tides. Bull Shoals over in East Bay is another example.

More than half of our live oyster reefs no longer exist because of Hurricane Ike and some of the other issues I’ve already mentioned. Since Ike, it seems like we’ve experienced either prolonged periods of drought or prolonged periods of freshwater inundation. Just three years ago our bay got flushed out by the Hurricane Harvey floods. It’s difficult to know our true potential when we can’t seem to keep trout in our system for more than a couple of years. A balance seems to be hard to find these days.

So what adjustments do we need to make until we see overall improvement, bay wide? I’ve been fortunate enough to find a few areas recently holding a good number of live oysters. As a result the bait is there along with fair numbers of trout and reds. Patches of well-defined slicks were what initially helped me find those fish. I actually have three or four  such areas that I seem to rotate like crops nearly every day. Sometimes I feel like Bill Murray in the movie Groundhog Day. I do the same thing every day until the pattern changes. The end result is usually enough to justify our efforts but I could certainly spin it into making others believe that our fishing is really good. In reality, though, I know we can’t go to all of the places throughout the bay and catch them like we use to.

I find myself fishing West Galveston Bay during times of the year when I would normally be on the ship channel or in East Bay. West Bay has quite a bit of live oyster reefs and the shoal grass there has made a miraculous comeback in recent years. The salinity has been more stable there and that bay has been loaded with shad and mullet. The surf and the jetties have been full of trout this year, so I think West Bay’s close proximity is a major advantage compared to other parts of the bay. San Luis Pass also helps breathe life into it as well.

As large as the Galveston Bay Complex is we find ourselves fishing many of the same small areas over and over again. These trout have had many different types of bait and lures thrown at them day after day. Until we get more trout into our system this will continue to be the case. The good news is that each part of the complex seems to have two or three of these small areas holding some fish. Towards the end of October more fish should gravitate towards the river mouths and bayou drains and become a bit more concentrated.

The presence of oysters, clams, and seagrasses are all bioindicators for our bay system. Some areas are struggling while others seem to be showing improvement. It’s just been one year since we’ve gone to a five trout limit, so we’re still years away from being able to analyze the potential benefits. In the meantime, we need some of the other pieces of the puzzle to fall into place. As Sargent Joe Friday from Dragnet would say, “Sorry. These are just the facts ma’am.”