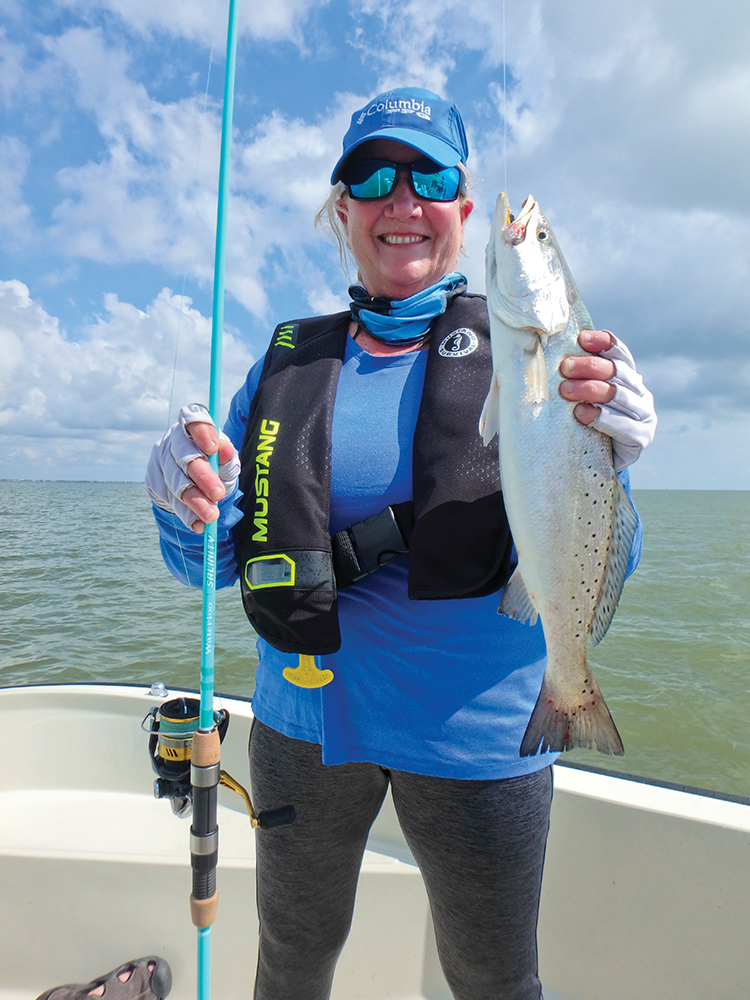 Kim Johnson with one of many healthy specks caught on Calcasieu Brew Sea Shad Saltwater Assassins while working a shell ledge with an eccentric 2-foot drop-off.

Years ago my family leased some land near Eastland, Texas for turkey and deer hunting. This region of the state is characterized by rocky rolling hills sprinkled with cedar and post oak trees.As would be expected, trees and vegetation were denser in the low-lying areas such as creek bottoms.I didn’t have a deer blind per se.Instead, I crouched on a folding stool behind a small cluster of post oaks on the side of a large hill.This vantage point provided me a birds-eye view of a heavily shaded dry creek bottom some 150 yards below.This creek bottom or valley as some would call it, had a small adjacent flat that deer, turkey and pigs would frequent.This flat was usually covered with fallen acorns and pecans, not to mention an understory lined with tender green vegetation.It’s no surprise that so many animals would ascend from the depths of the dry creek bottom to feed here.

These creek beds and valleys were the main arteries on the property through which the majority of the wildlife flowed.Knowing when to be on the side of that hill and how long to sit there was the key to a successful hunt.Staying cognizant of solunar feeding periods proved to be advantageous as did knowing the effects of variables such as wind speed and direction.During periods of high wind the animals were skittish.They didn’t feed normally and were hesitant to come out of the creek bottoms.

Many people have compared characteristics and strategies of hunting to fishing, but the similarities simply cannot be denied.The behavioral patterns that I witnessed while sitting on the side of that hill mimic what I see on the bay almost daily, especially this time of year.On the calmer days our trout are coming up on the flats near deep water to feed.However, they are not straying too far from the ledges or drop-offs.During high wind or strong current situations we find our fish on the deep side of the ledges where there is less turbulence.

Current velocity varies depending upon the water depth.The deep side of the underwater ledge will appear to have a slower current velocity, but as the ledge ascends toward the flat the velocity will be greater.If you’ve ever gone tubing in the Frio, Comal or Guadalupe Rivers you’ve probably noticed how much slower you floated in the deep stretches compared to the shallow areas (aka rapids). Just like the deer that stayed down in the wind-protected creek bottom it’s been my experience that trout tend to avoid the turbulent situations as well.In addition, trout being the opportunistic feeders that they are, will typically stage just below the drop-offs waiting to ambush bait that is brought to them by the current.So, in essence, they can stay in their comfort zone and still get an easy meal.

So where does one find the most productive ledges to fish during the late summer months?A good starting point would be a fishing map for the bay system(s) for which you are fishing.An up-to-date map will show where all of the major natural reefs are and some of the manmade ones.Most fishing maps will also indicate which reefs are better for the time of year you’re fishing.Google Earth is also a fantastic tool to zero in on deep guts along reef edges and shorelines.Once you’re on the water visiting areas that have piqued your interest you can then use your GPS mapping software and sonar to fine tune everything.Most current GPS units will show contour lines and reef edges.This will get you in the right vicinity and then you can switch over to your sonar for a real-time visual topography of the area you’re trying to learn.Over time, you will get a mental picture of the bottom landscape and you will know which conditions will provide the highest opportunity for success.

“It’s August.The water is hot so all of the fish will be near the bottom.Tie on a soft plastic rigged on a 3/8 gumball lead head and drag it on the bottom in 10 feet of water.”

If only it were this simple.

Despite the time of year, the ledges holding fish do not necessarily have to be deep.Even during the middle of the summer our fish are usually suspended. Instead of hugging the bottom they will typically find a thermocline which, in this case, would be a layer of cooler water.I can’t tell you how many times we’ve caught trout in 10 feet of water on topwaters and suspending plugs in the middle of August.

Wading these ledges can be just as effective as drifting.On windy days it’s definitely more effective than staying in the fiberglass.Wading steep drop-offs enables you to remain stationary and cast into concentrations of fish as opposed to picking off random individuals while drifting at Mach 1 across a reef or channel edge.It also eliminates hull slap which can scatter the trout.Another advantage to wading is that your feet become your sonar, which takes all of the guess work out of the equation.

Some of the most eccentric ledges (which in my opinion are the most productive) will be near the deeper channels such as the Intracoastal or the Houston Ship Channel.It just so happens that these channels along with our passes are the main highways carrying trout (especially tide runners) this time of year to various destinations along the way.The stronger currents near these areas tend to carve out sections of reefs, sand bars and mud flats creating those underwater shelves I refer to as ledges.

As August approaches, water temperatures will climb to their warmest of the year and many fishermen will comment on how difficult catching trout on artificial lures can be in the heat of the summer.While there are most certainly times when it can be a struggle, it’s not as tough if you know what to look for.Eccentric ledges with good structure such as jagged oyster shell are a great place to start.

Furthermore, I truly believe that some guides just don’t give their clients enough credit when it comes to learning how to throw lures.It’s either that or they’ve fallen into that ever-so-common trap of instant gratification which involves catching a limit as fast as you can using any means possible and then getting home while there’s still dew on the ground.Sorry, but that’s not fishing in my book and those clients damn sure aren’t learning anything.Oh well.

If anyone wants to learn how to trick trout while wading or drifting ledges you know where to find me. I’ll be sitting right here on my stool (leaning post) behind these post oaks (center console) waiting for great things to happen.