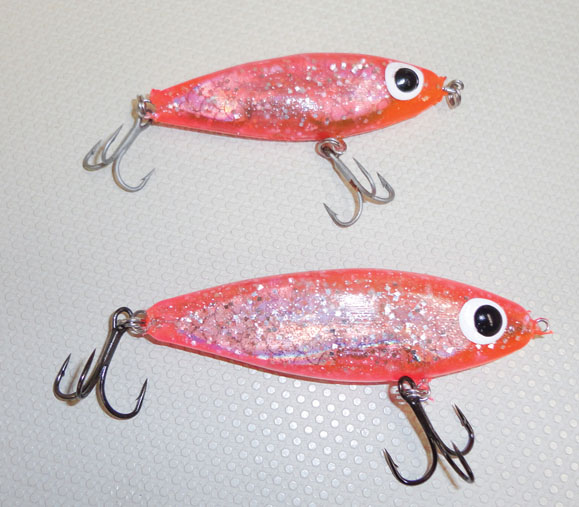 The MirrOlure Soft-Dine and Soft-Dine XL Suspending Twitchbaits are excellent “transition period” baits that mimic juvenile baitfish perfectly.
I received a call from Jeff who was coming into town with some co-workers for a conference on Galveston Island. It was early April and the forecast called for clear skies and light wind. When I rolled out of bed and checked the morning's weather conditions, that little prop in my head started turning as I tried to determine what to tell Jeff. The forecasted 5-10 mph southeast wind had worked itself into a rage, gusting to 25. I tried feverishly to get him on the phone, but to no avail. Finally, I proceeded with my usual routine in route to meet clients. You know, stop at the convenience store for ice, coffee and a below-average kolache that's only purpose was to fill a void in my growling stomach before greeting my new clients.

As I made the drive to our predetermined launch site I couldn't help but wonder if I was getting stood up. Honestly, I was kind of hoping I was. When I arrived, they greeted me with excitement and anticipation. "Good morning Captain! It sure is a beautiful morning isn't it!" I was thinking to myself that a 25 mph wind on Galveston Bay during the toughest time of the year is a lot of things, but it damn sure ain't "beautiful!"

The next several minutes were spent telling them what the conditions meant with regards to our ability of having a successful day on the water. "You mean you don't think we'll catch anything?"

My reply "Well, Jeff, we may catch a few but not on this end of the bay. You guys will have to follow me to another ramp and we'll need to wade to stand a chance at having any success at all." Jeff - "Well, we're here so we might as well give it a go." I was afraid they'd say that.

It was almost 9 o'clock by the time we found a stretch of shoreline that had "fishable" water. This particular area held scattered shell near the shoreline, a trough running parallel to the shore, then shallow reefs beyond the trough. The first hour was uninspiring with only a small red coming to hand. As we side-stepped down the shoreline I finally noticed a sign of life when a small slick burped on the other side of the gut. We threw just about everything, but still no takers.

We could see trout rolling occasionally and it appeared that they were feeding on tiny shad. At my wit's end, I walked back to the boat and grabbed some "James Plaag Specials" (1/16 ounce H & H Flutter Jigs). In guinea pig fashion, I started chunking a plum/chartreuse 5-inch Salt Water Assassin rigged on the flutter jig in the area where the slicks were popping. An erratic whipping action of the rod tip followed by a about a two second pause ended up being the magical presentation that these fish wanted. It seemed that with the concentrations of shad just below the surface, a worm hovering and wiggling long enough would eventually demand attention. After switching everyone over to the ultra-light worm rig we managed to peck out a dozen trout to almost seven pounds before the small feeding window closed. The trout never ate again and the entire shoreline was void of activity.

This trip was a microcosm of that infamous three or four week period. The spring transitional period varies up and down the Texas Coast, but Galveston Bay's tough fishing usually spans from late-March through the third or fourth week in April. Many local anglers travel further south during that stretch; some of us choose to gut it out and face the challenges head-on.

It's like when I was a little boy and my mother told me, "You're going eat your Brussels sprouts and you're going to like it!" It does require more patience, but there are benefits too! I've always said that uncooperative fish make you a better fisherman. Anyone can catch them when it's easy, but tricking trout when they turn into snobs separates the schoolboys from the scholars. And, as a reward, there are plenty of above average size trout caught during this time.

So what exactly is a transition?

Webster's definition: Transition (n) - Passage from one state, stage, subject, or place to another: Change.

My definition (as it relates to speckled trout): A period of time in which speckled trout are scattered and can be difficult to catch as they migrate from one particular type of habitat to another. The migration does not occur all at once, but in more of a ping pong fashion until variables responsible for the inconsistencies stabilize.

During winter, patterns are somewhat predictable as trout hold predominantly over mud and shell, usually not too far from deeper water. Their primary food source during this time is mullet. Mullet are fairly easy to replicate as evidenced by the many plugs from which we have to choose. As cold fronts become less frequent and bay water temperatures begin to rise, trout instinctively venture further away from winter's thermal zones. Just when moderate numbers of trout begin to show over sand, grass and/or hard shell, a late cold front causes water temperatures to drop again. The scenario repeats itself over a four or five week period keeping trout scattered and discombobulated. As water temperatures reach the high-60s and low-70s for longer periods, tiny forage species such as brown shrimp and shad begin their exodus from bayous, marshes and rivers. These waves of juvenile forage flood the bays by the millions providing an endless food source for trout and redfish. Very little effort is required for feeding. Trout and other predator fish simply swim through clouds of morsels with their mouths open without distinguishing one shad from another. It's like being at an all-you-can-eat buffet and your table is closest to the buffet. They have a 16 ounce T-bone on the menu, but the buffet is so much easier and you don't have to spend as much.

There are other variables that have an effect on the timing of when the transition takes place, how exaggerated it is and how long it lasts. A mild winter usually results in an earlier transition period and vice versa. Rainfall and drought can minimize transitional behavior of trout. We observed this for the past five years when bay-wide salinities were so high that bait gravitated towards less salty areas near rivers and bayous. This particular scenario can give anglers the impression that there are more trout than imaginable when, in reality, the trout were condensed in smaller areas of the bay. Strong easterly winds coupled with spring equinox tides can spread fish over a larger area as well.

How do we increase our success?

By no means am I saying that we can't have fantastic days on the water during this stretch because we have and will continue to do so. We've all experienced exceptional days during this time especially when there's a three or four day consistent weather pattern. And, as I mentioned earlier, the larger trout that we catch and release are a major bonus! It's those days sandwiched between the good ones when we need to hone our skills and alter our approach. So what can we do?

* Focus on areas with a mix of shell, mud and hard bottom

* Fish near drains or any other type of outflow

* Employ quality gear such as high-modulus Waterloo rods, lightweight Shimano reels and sensitive line. A soft bite with a stiff spring wind can be a recipe for failure without superior equipment.

* If all else fails and the trout just won't bite, then target redfish in the back lakes and near marsh drains.

This is the time of year on this part of the coast that requires a little more focus and waiting for the right time to capitalize on the limited opportunities. Be tenacious, have patience and, learn to like it. I've learned to like Brussels sprouts.