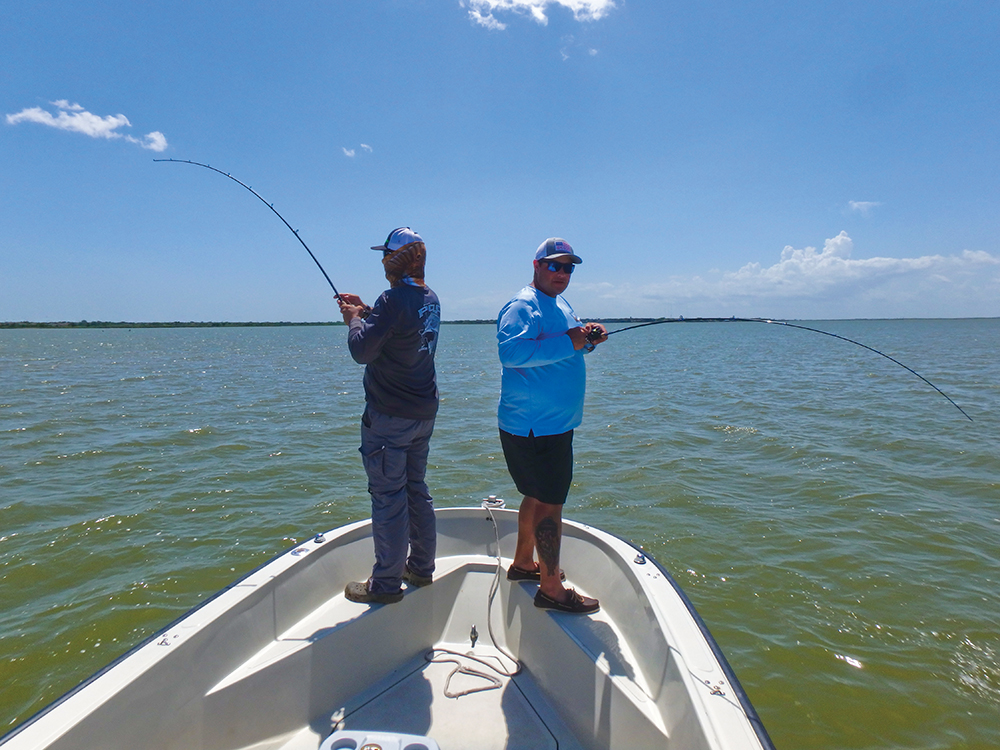 It was a long run across the bay. I had been fishing many days in a row and the pattern was predictable. The conditions were nearly perfect. The only thing I prayed was that no one would be there when we arrived because this was a small and tight school of trout – pretty much a one-boat school. We were about a half of a mile from “the spot” and I couldn’t detect any boat silhouettes. The closer we got the more excited I got. When we arrived there were several tiny slicks right where they were supposed to be and the smell of trout in the air was pure heaven. Now all we had to do was just pull up and start casting, right? Wouldn’t it be nice if things were that simple? More often than not, they’re not.

I don’t recall discussing anchoring on schools of trout much in my past articles and in all likelihood, said discussion won’t mean much to my Power Pole-deploying friends down on the middle and lower coast. However, it’s something we do quite often in deeper upper coast bays such as Galveston. This particular school warranted such an approach in order for us to fully capitalize on the opportunity. The tide and wind were coming from the same direction. Most anglers I see drifting or anchored in such conditions seem to prefer casting directly downwind. With the trout facing into the current their success is typically limited because the lures being presented are brought up from behind the intended target. Therefore, it doesn’t appear natural and will not draw many strikes. I would imagine most of us would want the most bites possible. So let’s discuss a better approach.

My boat has multiple cleats on both the port and starboard sides from the bow to the stern. This allows me to fasten the anchor rope wherever needed in order to position my boat at the optimum angle. In the scenario mentioned above the best one to use was the bow cleat. This allowed all three of my clients to cast slightly left, allowing their soft plastics to sink from left to right. With the trout facing right to left, this set-up made for a fruitful morning of catching. This doesn’t seem all that complicated, but you’d be surprised.

It’s also worth mentioning the importance of providing the appropriate amount of scope (ratio of water depth [including freeboard] to anchor line) when anchoring. Nothing sucks worse than anchoring on a school only to have the anchor slip. Not only can you lose contact with the school; you also run the risk of spooking or scattering the fish when your boat drifts over them while noisily dragging an anchor with 10 feet of chain across an oyster reef. Unfortunately, I speak from experience.

As a general rule, a 7:1 ratio is sufficient when determining the scope. This means that you would feed out 70 feet of rope to anchor in 8 feet of water if you were in a boat with 2 feet of freeboard (7 x depth of water plus freeboard). Obviously, there are variables such as wind and current which would necessitate adjustments, but this is a good guideline.

Let’s discuss some other “little things” that I witness on at least a weekly basis that deserve addressing. Some of these minor adjustments will help us catch more fish while others could help protect the ones we want to catch down the road.

One of my clients was fighting a fairly large trout recently when his line fell suddenly limp. Despite using a 20-pound fluorocarbon leader, repetitive bouncing along oyster shell subjected the knot to excessive abrasion, eventually resulting in a break-off. This could have been prevented by using a loop knot. A loop knot versus a Palomar, uni, clinch, etc. helps prevent break-offs on shell most of the time because it allows the leader line some play because the actual knot is located above the jig head. Obviously, this is not an issue when fishing grassy or other non-reef bottomed areas.

Careful with the Little Ones

Every year we seem to go through stretches of catching lots of dink trout mixed in with legal-sized ones. We want these little trout to have the best chance at survival so we do things like pinching down the barbs of our jig heads. This not only reduces damage to the trout but enables a quick and easy release. Also, we do not flip these little guys into the boat to watch them flop around on the deck. We try to gently grab them with a wet hand and place them back into the water. All of this can and should be done over the side of the boat. There’s no need to even bring them inside the boat. Oh, and we never use a towel to grab them! That protective slime (mucous layer) is there for a reason.  Talk about pet peeves!

1980 Called – They Want Their Fishing Rod Back!

I was sitting in my boat the other morning waiting for some new customers to arrive.  After donating several pints of blood to mosquitoes, I noticed a truck pulling into the parking lot. From it emerged a large man. He walked to the bed of his truck and pulled out a very large object. The first thing I thought was “Oh my God!  It’s Buford T. Pusser from Walking Tall. He’s been resurrected and he’s here to kick someone’s @ss.” My second thought was dear Lord; please don’t let this be my customer. It wasn’t a homemade hickory club in his hand like the famed justice-seeking Tennessee sheriff carried, however – you guessed it – in his hand was a very large and extremely heavy rod upon which was mounted a winch of a reel suitable for deep-sea fishing. He wasn’t my customer by the way. Thank you, Jesus!

It should almost go without saying at this point, but modern day rods and reels are the way to go. It’s crazy that I still see folks using outdated and less-effective equipment when there’s state-of-the-art gear at affordable prices readily available. There are many from which to choose. A 13-Fishing Concept Z reel rigged on a Waterloo Salinity rod is a darn good set-up that possesses all of the attributes necessary for feeling subtle bites while enabling one to handle hours of casting without needing Tommy John surgery afterwards.

Speaking of reels – What we string them with can be a game changer as well. Since we’re not fishing for yellowfin tuna we can usually get by with something less than 100 pound test. We have three basic categories of fishing line these days; monofilament, braid, and fluorocarbon. I guess we could throw in hybrid braided lines but I don’t have much experience with them. Regardless of which one you prefer the key is to not overdo it. Ten pound test is sufficient when using mono and 20 pound (6 pound monofilament equivalent diameter) is plenty good enough when using braid or one of its hybrid cousins. Using slightly smaller diameter line compared to the old standards of 12 pound mono and 30 pound test braid enables the reel to hold more line. This, in turn, results in increased casting distance. Increased casting distance allows you to not only cover more water with your lure, but also reach fish that would otherwise spook if you attempted to get closer to them. My favorite brands of line are Trilene XL Smooth (mono), Seaguar Smackdown Tournament (braid) and Suffix 832 (braid). Whether I’m using mono or braid I always tie on a 20 pound Seaguar fluorocarbon leader because of its abrasion resistance and invisibility properties.

There are dozens of “little things” we can continue to discuss but I’m only allowed so many words and space, and you only have so much time. Until next time, keep your head on a swivel, listen to those who are willing to teach, and keep a great attitude.